This year marks the 60th anniversary of the first manned flight into space. Gagarin’s 108 minutes turned the whole world upside down.

Today we publish rare photographs of the famous cosmonaut to show Gagarin as you have never seen him before.

Gagarin’s house – this is how residents of the village of Klyazma in the Pushkin District of the Moscow Region proudly call the mansion at number 15 on Gogolevskaya Street. Yuri, while studying at a vocational school in Lyubertsy, often came to the hospitable Maria Timofeevna Dyukova, his mother’s aunt. Having become a star Hero of the Soviet Union, he continued to visit her with his wife and daughters. I tried to come by all means for the May holidays to help dig up a vegetable garden. He loved to work with a shovel.

The aunt had a son, Vladimir, and a daughter, Nadezhda. They were very friendly with their cousin.

In 2003, I first came (and then visited more than once) to Klyazma. I enter the unlocked gate of Gagarin’s House. There is not a single sign around that someone lives here. The vegetable garden is overgrown with weeds, apparently long abandoned. But a man suddenly appeared on the porch of a log building, held out his hand, introduced himself: “Vladimir Dyukov.” I guess: the son of Maria Timofeevna Dyukova, Gagarin’s cousin.

It turned out that the forestry scientist lives alone in the house. With rapture he told me for several hours in a row about Yuri, what an economic peasant he was in his youth, when he studied at a school in Lyubertsy:

– Now he will fix the rickety picket fence of the fence, then he will clean the old coal samovar (he liked to drive teas), then he will wash the dishes. Addicted me to physical education, forced me to pore over textbooks. And in the spring he dug a vegetable garden with delight. Mom did not like him, she reproached me that I was not at all like that.

Auntie treated her nephew to pancakes. While baking them, he ran to the railway station, where the collective farmers were selling sour cream – thick, there was a spoon in it. I ate to the bone.

– At each arrival he bred a samovar, waited for him to puff, made tea. Most often Indian. And if he was not there, he put currant leaves in the teapot directly from the bush under the window. No more fragrant! They usually drank the drink with mom’s delicious pies.

There are many photographs of Gagarin on the walls of the house. Vladimir kindly allowed me to reshoot them. He told the story of each shot.

Soon after returning from space, Major Gagarin rushed off to pancakes to his aunt in Klyazma. He picked up Yura, the three-year-old son of Nadezhda Shchekochikhina, a cousin. This moment was captured by the camera.

– We had a family photographer – the husband of my sister Nadia, Alexander Shchekochikhin. Most likely, this is his picture, – Vladimir explained.

Several years later, when I opened the gate of house No. 15 on Gogolevskaya Street in Klyazma, I saw a stranger near the car. It turned out to be the same kid from the photo. I was incredibly happy: I had long wanted to find the one who was in the arms of Major Gagarin as an infant, who had just returned from space. Photographing and printing two pictures side by side is fun! However, the interlocutor flatly refused:

– With such stubble and under the camera lens ?!

I learned that Yuri Jr. graduated from a technical university, worked all his life in a “box”, and recently became a pensioner. He spoke with a noticeable sadness in his voice:

– Vladimir Konstantinovich Dyukov has not lived here for a long time. I am here for the last time too, here I came to get my belongings. The house is sold.

… But I’m going back to 2003. I draw the attention of Vladimir Dyukov to the picture: here is Gagarin with a little girl and a dog.

– Yura and Valentina came to us with his daughter Lena. We drank tea with fragrant herbs on the veranda, started talking and did not notice how the little girl got off the porch. Valentina, seeing her next to a dog named Dick, turned pale, silently pointed out the window. “Do not be afraid, the shepherd is smart, will not touch the child,” Yuri tried to calm his wife. And he hurried out into the street. Then Alexander’s photo lens clicked, – Vladimir Dyukov recalled. 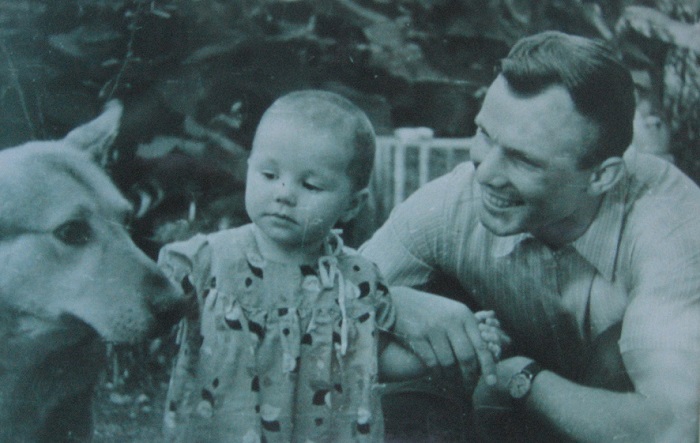 It turns out that Shchekochikhin also infected Yuri Gagarin with the photo business. And he bought from a fellow student at the vocational school, lying idle in the nightstand “Amateur”. I clicked, coming to Klyazma, with delight.

– And here is a photo of 15-year-old Yuri. He is here in the uniform shirt of a student of a vocational school with buttons polished to a shine. Mom really liked this photo on the Gagarin pass, and she asked the family photographer to enlarge it. I remembered how my nephew, enrolled in a vocational school, first arrived in a new dress. I was incredibly proud and happy.

On the other wall of the upper room of the house, the photographs were also cramped.

– And here Major Gagarin is sitting next to his benefactor – the director of the Lyubertsy vocational school Vasily Mikhailovich Bykov. He considered him his godfather, because he accepted Yura with a six-year-old, and not with a seven-year education, as it was supposed to, – Vladimir continued the story. 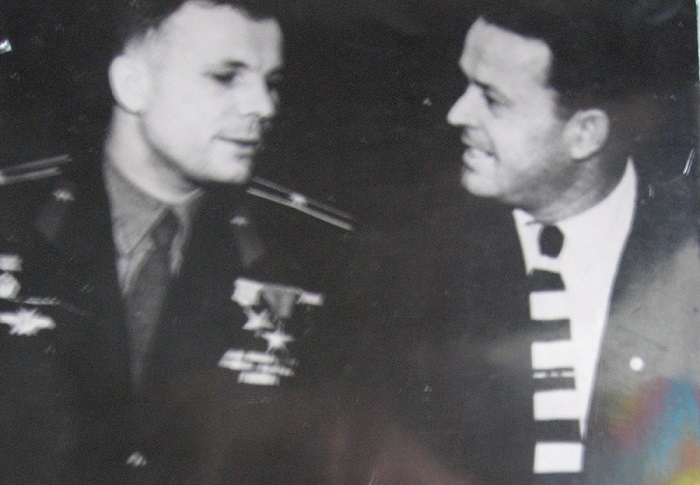 And here is a family photo. Vladimir explains: 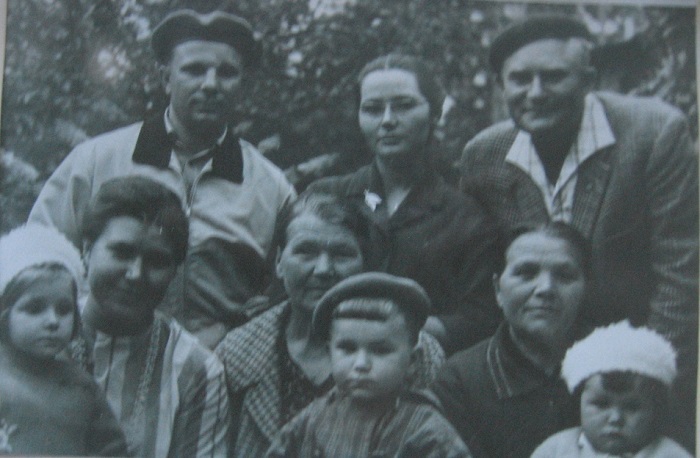 – During the next visit of the Gagarins, my mother said that I needed to take a picture as a souvenir. Alexander Shchekochikhin sat the elders with children in their arms on a bench, and put Yura and Valentina in the second row. I put the lens on the self-timer and managed to run, stand next to the guests. I got into the frame. It’s a pity, I was at the institute at that time. In the first row from left to right: my own sister Nadezhda Shchekochikhina, next to our mother Maria Timofeevna, then her sister Olga Timofeevna, who constantly lived with us. They have kids in their arms – Lena and Galya Gagarins, Yura Shchekochikhin. He hung this picture in the apartment.

I am examining the following, not very clear picture, and I hear Vladimir’s explanation:

– Siverko blew, Yura was chilled, he hid his hands in his pockets. Then my father took a picture of him (top photo on the splash screen).

In the year of the 60th anniversary of the Soviet cosmonaut’s flight, Queen Elizabeth II of Great Britain remembered Yuri Gagarin with a kind word: “He was charming! And I think the fact that he was the first astronaut makes him especially charming. ” In July 1961, she received him for dinner at Buckingham Palace. But he came to England not at her request, but at the invitation of the British Foundry Union. They presented the Russian guest with a diploma of Honorary Foundry, knowing that this was the first profession that Yuri Alekseevich received at the Lyubertsy vocational school.

60 years have passed since the flight of the cosmonaut No. 1. Fly, time!

Photo from the archive of V. Dyukov