Skater Evgeni Plushenko and producer Yana Rudkovskaya began talking about replenishment in their family this summer. Rudkovskaya said that she really dreamed of having another child. The celebrity went through lengthy examinations and IVF procedures exhausting the body, but attempts to get pregnant remained without result due to Yana's health condition. In July, it became known that the stellar family decided to resort to the services of a surrogate mother - as it turned out, by that time the baby for Rudkovskaya and Plushenko was already carrying.

The child was born on September 25, 2020. They decided to name the boy Arseny. Yana Rudkovskaya announced the good news by subscribers in her microblog on Instagram. The producer shared a joint photo with her husband Eugene, as well as her sons Alexander and newborn Arseny. The businesswoman said that now she has four sons and called herself the happiest mother. "Dreams Come True!" - Rudkovskaya rejoiced (the spelling and punctuation of the author are given unchanged. - Prim. row.). 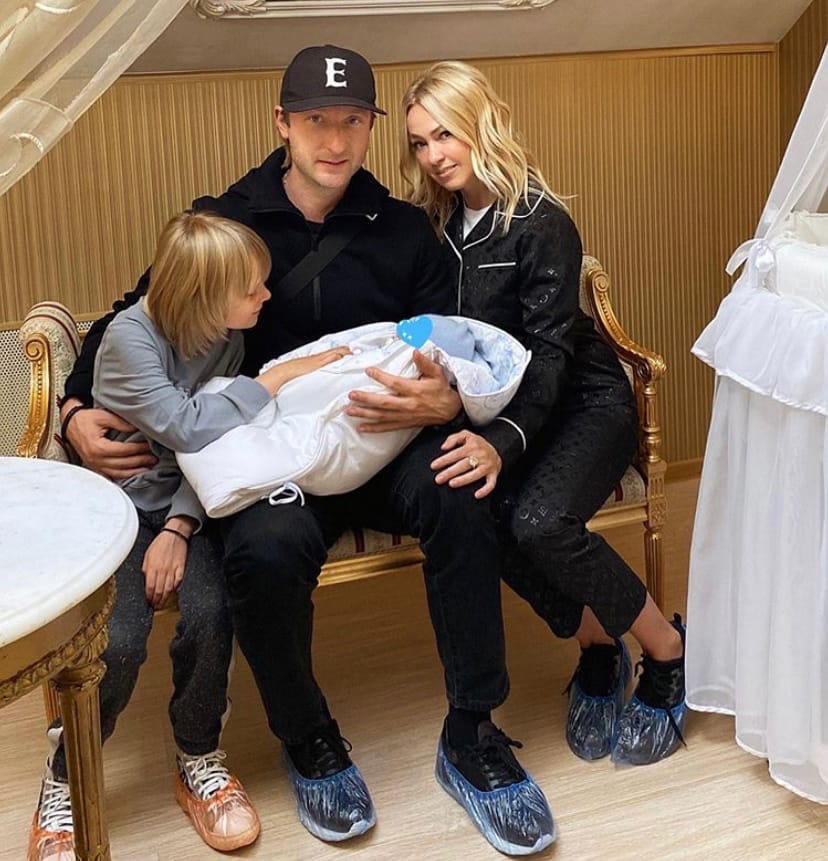 By the way, 7-year-old Alexander, who is affectionately called the Gnome Gnomych in the family, seems to be very happy with the appearance of his younger brother. Rudkovskaya previously shared with fans touching pictures and videos in which Sasha plays with Arseny, walks with him, and also feeds the baby. Today, Yana again showed the subscribers of her personal microblog footage of how her sons spend time together. It is also worth noting that Yana covers the baby's face in all the pictures, not wanting to reveal Arseny's appearance so far. However, in addition to this, the businesswoman is eager to share the details of the boy's life. For example, the other day Rudkovskaya showed fans the sleeping room of a newborn.

By the way, Alexander Plushenko, at the age of seven, has already become a real celebrity. The son of stellar parents followed in his father's footsteps and chose a career as a professional skater. During his life, Sasha managed to start a personal microblogging on Instagram - which Yana currently maintains - with an audience of almost half a million, as well as to participate in various sports competitions. Recently, the younger Plushenko, in addition to all this, decided to try himself in short humorous videos, which he films with his girlfriend. According to Rudkovskaya, her son is already making millions and has many advertising contracts.

Recall that Yana Rudkovskaya gave birth to her first son, Nikolai, in marriage with billionaire Viktor Baturin. In addition, the star adopted a child from her husband's previous wife, the boy Andrei, whom, according to Yana herself, she considers family. A divorce from her first official husband was not easy for Rudkovskaya. In addition to the jointly acquired property, the broken up couple also divided children among themselves. The boys lived with their father for several years, but in 2011 they returned to their mother. At the moment, the relationship between Yana and Viktor improved and became friendly.

Yana Rudkovskaya began dating with her current husband Yevgeny Plushenko in 2007. Just a year later, the couple announced their wedding. Despite the skepticism of the success of the union of Eugene and Yana on the part of their relatives, based on the fact that the producer is seven years older than the skater, in 2009 the lovers officially legalized their relationship. The wedding ceremony was magnificent. The luxurious celebration was attended by over 150 guests, among whom were also eminent representatives of the domestic show business.