The basis of the traditions and folk customs of the Yakuts is the principle of the unity of man with nature. This people originated from the nomadic tribe of Kurykans, the first mention of which dates back to the 14th century. Over time, the ancestors of the Sakhalars assimilated with the southern Turkic-speaking settlers in the territory of the middle reaches of the Lena River. Today, there are 4 main groups of Yakuts: Amga-Lena, Olekma, Vilyui and northern. Each of them has developed its own traditions and customs, and yet their culture has common features that characterize the historical past of this people. 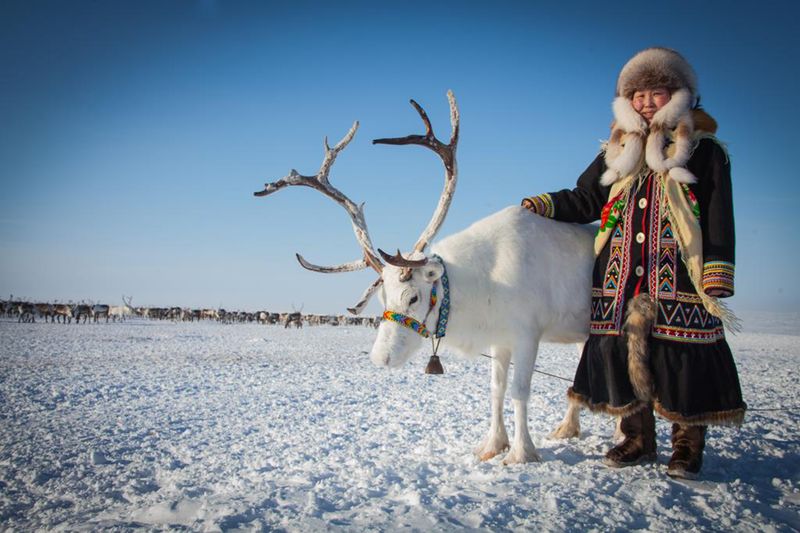 Orthodoxy came to Yakutia during the travels of the Russian explorer Semyon Dezhnev, but for almost 400 years this faith has not been able to completely supplant the original religion of Aar Aiyy. According to tradition, the Yakut people believe that Tanar, one of the 12 White Aiyy, was their progenitor. The basis of this religion is a close connection with the spirits of ichchi, which surround a person from the moment of conception.

Aar Aiyy is a combination of animism and shamaism. The name of the religion comes from the name of the main deities or inhabitants of the Upper World. In the tradition of the peoples of Yakutia – the representation of the world in the form of a giant tree Aal Luuk Mas. Its crown is the habitat of supreme beings, the middle of Orto Doidu is the world of people, and the underground part of Allaraa Doidu is a place of accumulation of exclusively evil spirits.

The idea of ​​this people about the soul is interesting. In Yakut mythology, three of its hypostases are defined:

In Yakutia, the tradition of honoring the White Aiyy is still strong. Ysyakh holiday is held annually in all cities of the Republic of Sakha. It is celebrated on the summer solstice, June 22. The customs of the peoples of Yakutia on this day involve large-scale festivities, because, in fact, the holiday is considered the New Year or the rite of meeting the Sun. In addition to the main symbol of Aal Luuk Mas, people set up ritual poles, hitching posts, so that the spirits descended from heaven could leave their fiery horses next to them. 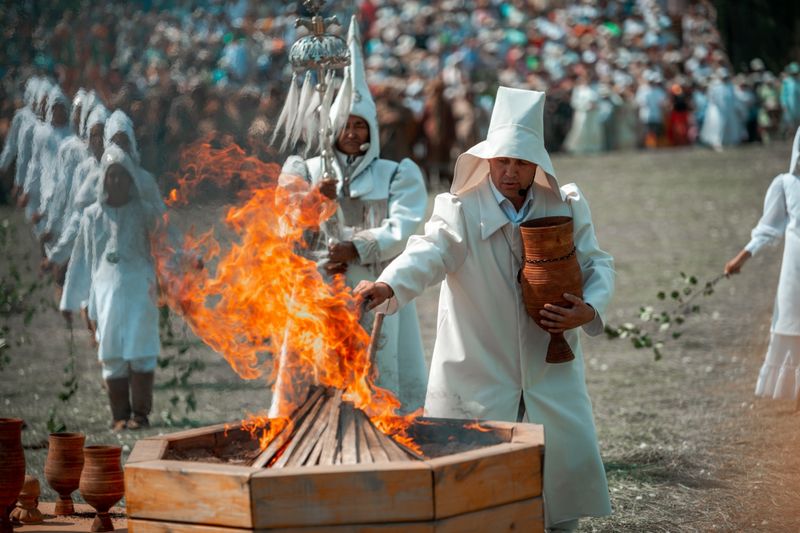 Today, almost all the rituals associated with the tradition of celebrating Ysyakh have been preserved. At sunrise, the ritual of burning horse manure begins, as a special incense for the god Diesegeei Aiyy, who gives people cattle. The presence of a shaman at the bonfire is obligatory, who reads spells in honor of the Sun by the fire. The ritual fire burns until the dawn appears. All this time, people with birch branches in their hands stand around the shaman, as this tree is considered the purest and drives away evil spirits.

And then the traditional festivities begin. First, all people get up in a big round dance: this custom of the Yakuts is a tribute to the Sun for life. Such a dance goes on for more than one hour: people change each other, but do not stop so that they can praise the luminary for as long as possible. Further, various competitions and competitions are held throughout the day: wrestling, jumping over obstacles, eating the most food, drinking the most koumiss.

The family traditions of the ancient Yakuts were based on the custom of creating a large family. Until the 19th century, polygamy was a priority, while each wife lived separately, receiving her own plot of land from her husband. The family did not run a common household: each of the women arranged her own life. 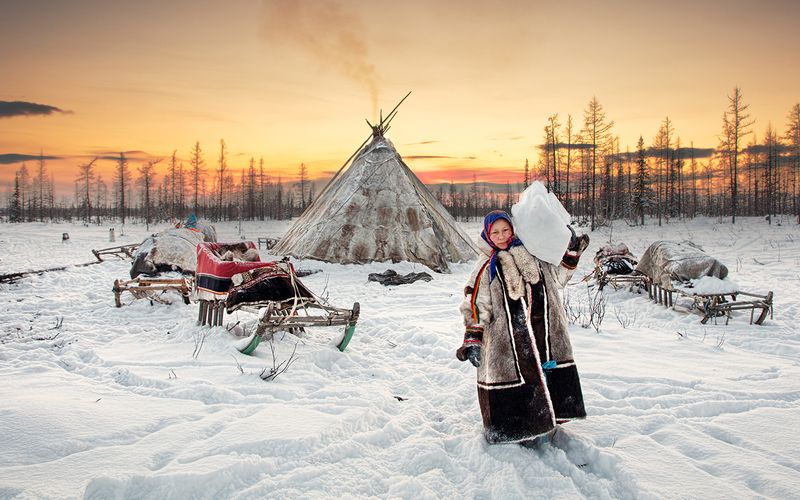 Despite the patriarchy, the main role in the formation of the future family was assigned to the side of the woman. Mothers were engaged in the choice of a couple for their daughter. Almost from infancy, they looked closely at the families where the boys grew up, and watched the future head of the house. The boy must have a strong family, strong health, he must be hardworking and hardy. Previously, the best choice was considered a guy who knows how to set up yurts and deftly hunt. The correct age for marriage was considered the period of 16-25 years.

The preparation for the wedding and the celebration itself among the Yakuts was very reminiscent of the rite of many other nomadic peoples. The marriage was handled by the girl’s family. Older women went to the guy’s house and offered his parents a bride. If the adults were satisfied with everything, the groom’s side determined the size of the bride price. Previously, it was paid in deer, today – in money.

In the tradition of the peoples of Yakutia – the feminine principle of everything related to the creation of a family. After the matchmaking, the wedding day was appointed, and the bride always had the last word in this matter. At the appointed hour, the shaman entered the yurts of the young in turn and fumigated the dwellings with incense, as if cleansing everything around from evil spirits. Only after that, the guy and the girl could go out into the street and see each other for the first time. Modern traditions are not so strong, but in those families where they are nevertheless adhered to, before the wedding, the future husband and wife are always accompanied on dates by close relatives. 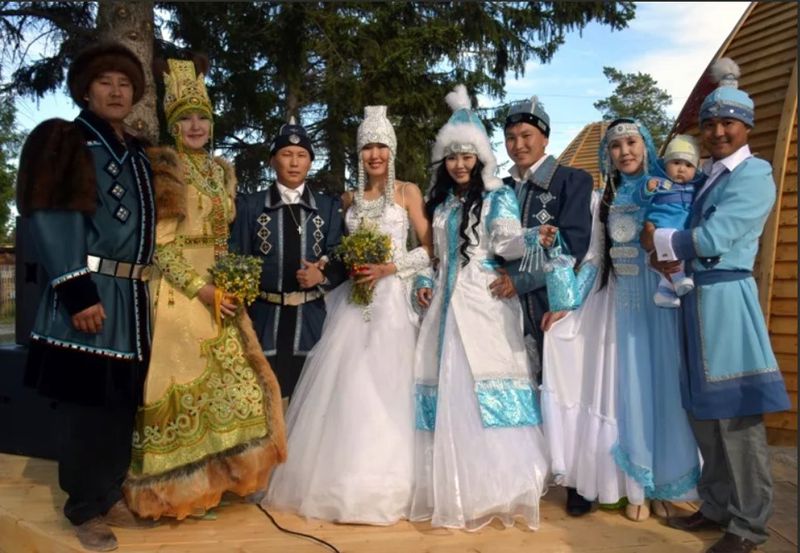 According to custom, the Yakut bride’s attire consisted of a snow-white dress and a bright tight belt. Fur coats were always collected as a dowry for a girl, as a symbol of wealth. A special place in the wedding ritual was occupied by the festive table: treats were usually served with venison, beef, foal and fish. National drinks are koumiss and wine.

In the national tradition of the Sakhalars, the custom of building yurts has been preserved. Unlike the Mongols, this people chose logs as the main building material. The house had to be easy to build, but just as easy to disassemble, while being durable, well protected from wind, frost and the invasion of wild animals. For the summer they put uruses from birch bark.

Yurts were built in a trapezoidal shape, which made it possible to save heat and quickly heat the dwelling. Only small trees were taken for buildings, since it was considered a sin to cut down large plants on purpose. The houses were located in a lowland, trees must have grown around, which, according to legend, protected from evil spirits and did not take away the strength of people. 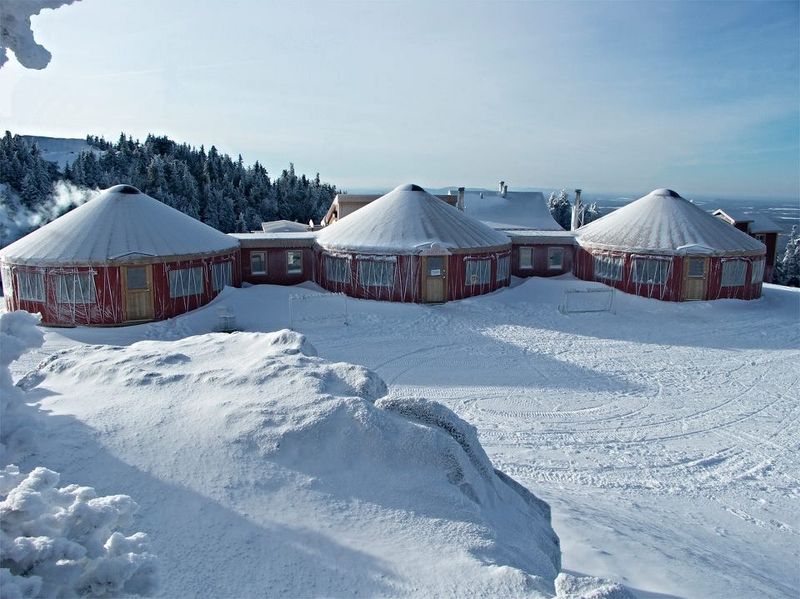 Doors in the yurt were made from the east side towards the sun. The gaps between the logs were covered with manure and shavings with sod. There were few windows in the yurts. Inside there was a fireplace, as beds the nomads used benches placed above the walls and fenced off from each other by small walls.

The cooking traditions are very interesting. In Yakutia, the main treat is venison. Foal is in second place, fish is in third. It is noteworthy that almost everything goes into food without waste: offal, blood, and fish is completely cooked with offal. Given the frosty climate of the region inhabited by this people, most meat dishes are served frozen raw, adding spicy seasonings for taste. 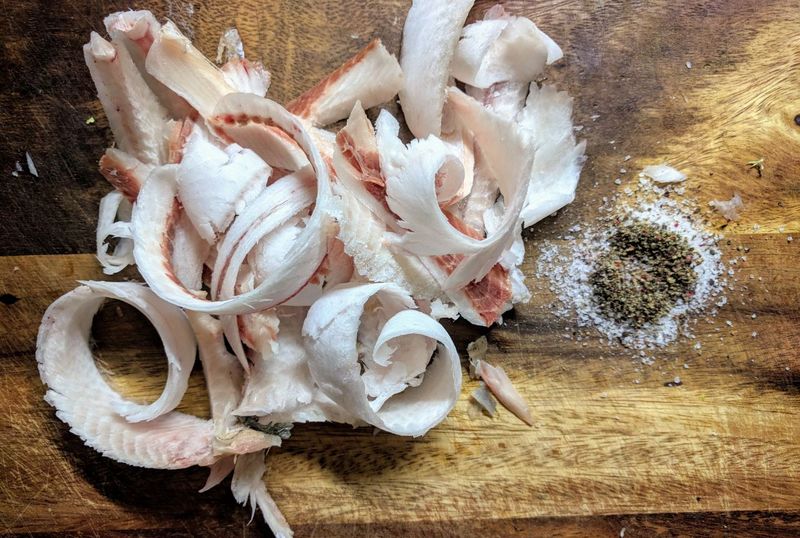 Sakhalars do not have vegetables, fruits and mushrooms in traditional cuisine. Of the drinks, everything that is made with mare’s milk is in priority: koumiss, koiuurgen, curdled milk, cottage cheese, cheese. For dessert, they serve chokhoon – milk whipped with butter and wild berries.

The traditions and customs of the people of Yakutia regarding the culture of appearance have changed little over the last century. Living in harsh climatic conditions, each Sakhalar has several fur coats and caftans made from dressed skins of wild animals. All the clothes of men and women are complemented by skillful decorations: embroidery or silver accessories. The national costume includes a top warm cape with a belt, leather pants and fur socks. Shirts are worn underneath.

A distinctive feature of Yakut clothing is an ornament with a lily-sandana flower. It combines all the colors of the year: black means earth and spring, green – plants and summer, brown – the color of autumn, silver shades – a symbol of snow and stars.

An interesting cut of headdresses: the hat looks like a small chamber. So that a person is always under the protection of the higher gods, a special hole is made in it, where the sun and moon look. And in order not to interrupt the connection with space, headdresses are supplemented with small ears.

The main occupation of the Sakhalars is cattle breeding. Each small settlement has its own herd of deer and horses. The men graze them, and the women take care of the cattle for the needs of the family. Everyone prepares fish for their own food in the summer, but the Yakuts have not developed fish farming as a separate industry. 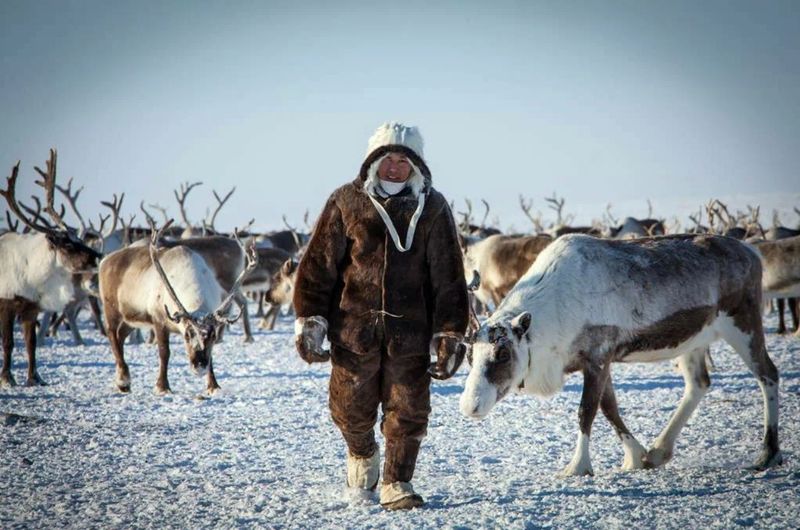 In the North, nomads live by hunting. The extraction of fur-bearing animals became especially popular when the Russians got to that region. Since the 17th century, the development of agriculture began: some cereal crops are grown.

The main crafts are the processing of wood, leather, fur, and bone. An unusual tradition for the northern peoples is the production of hand-made ceramics. Only the Yakuts are engaged in this craft. 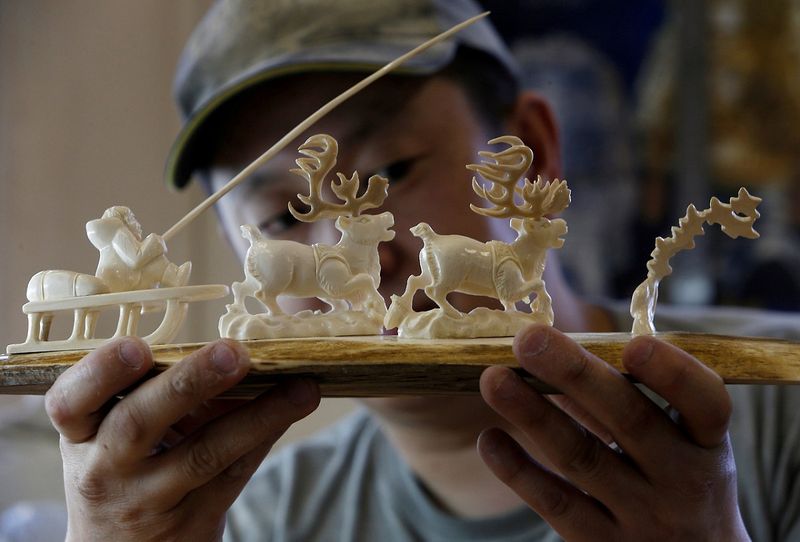 There are no equals to the Sakhalars in the manufacture of hitching posts, with which many beliefs and rituals are associated. This is not just a post for horses: hitching posts have different heights, shapes and decorations. In total, there are 3 groups of such structures:

The modern way of life of the inhabitants of the Republic of Sakha bears little resemblance to how their ancestors ran their household, and yet it is the Sakhalars who are considered one of the few peoples who managed to preserve their originality. For the most part, they remained pagans and honor the traditions and customs that have been formed in Yakutia for centuries. Sakha have preserved a unique folklore form of poetry – the olonkho epic, which has been included in the UNESCO heritage list since 2005.