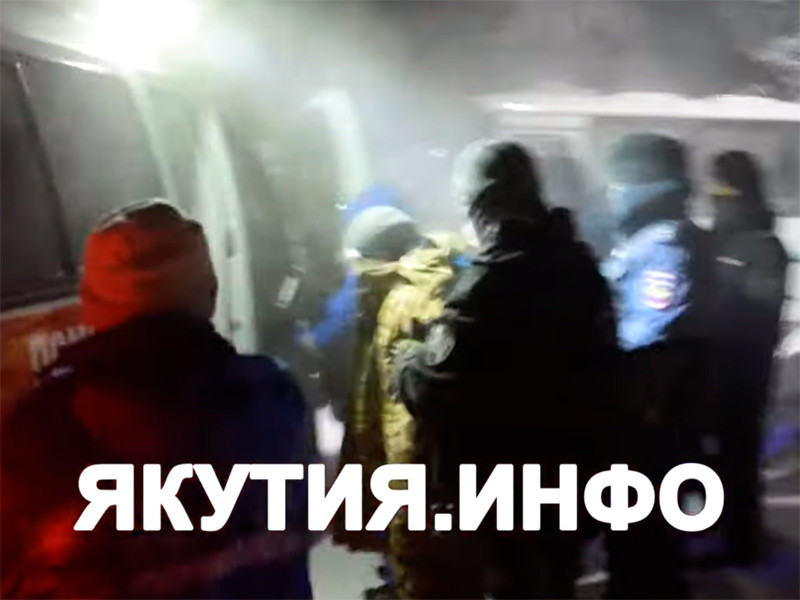 The Yakut shaman Alexander Gabyshev, detained by the security forces on January 27, was wounded in the head. Victoria Kyyayylaana, who witnessed the detention, told about this.

“We stood there for five hours, the police did not allow us to enter the territory, then they looked for Alexander at all levels. Then we learned about the wound to the head,” she explained. The woman’s words are quoted by “Siberia. Realities”.

The shaman, who recently announced a new campaign against Moscow with the aim of “expelling Putin”, was detained at his home. Before that, an ambulance was on duty near Gabyshev’s dwelling. About 20 law enforcement officers provided force support to the doctors, Yakutia.info writes.

“They said that they had arrived as support with doctors so that they could take tests from Gabyshev. He, they say, had contact with someone from the coronavirus patients,” said Olga Timofeeva, the shaman’s lawyer.

At the same time, the police did not provide any documents confirming the need for examination or hospitalization of Gabyshev. “They had a piece of paper with the words” report “and that was all. His sister assured that they had no contacts with the infected. [Габышев] did not let them in. As a result, this team of doctors left, because they were not presented with a court decision on hospitalization either, “the lawyer added.

Then another team of doctors arrived, who “tied Alexander Gabyshev, put him in handcuffs and even took him to the car without shoes.” The doctors told the lawyer that they were “taking the shaman to the psychiatric hospital”.

Olga Timofeeva emphasizes that the “emergency hospitalization” was carried out with gross violations of the law. “As a lawyer, I have the right to accompany my client. If he is hospitalized, then documents must be presented – in this case, only a court decision gives the authority to hospitalization. As a lawyer, nothing was presented to me. speaking already about the Constitution of the Russian Federation, “she explained.

In the psychoneurological dispensary of Yakutia, Gabyshev’s forced hospitalization was explained by his refusal to receive treatment. This was reported on the website of the mental dispensary of the republic. After being discharged in the summer, the shaman was “put on active observation,” in which he had to come to a psychiatrist twice a month and take medications, the press service of the dispensary reports. In mid-December, Gabyshev, according to the medical institution, came for the last time, so in January he was hospitalized forcibly.

Earlier, Gabyshev was repeatedly tried to isolate under the pretext of a coronavirus pandemic. The first attempt to test a shaman for coronavirus occurred on May 6. Then on May 8 the attempt to “take tests” from the shaman was repeated, but to no avail.

“I was not interested in where they came from, but my sister knows. And I have already told them and I am telling them – I am not a contact person, I have been sitting on self-isolation for a long time. I will not let anyone go beyond the fence. Therefore, I will not go anywhere with them, – explained Alexander Gabyshev. “I refuse to take them for tests. Now I am a political figure, I understand why they need it. Therefore, if they try to take me by force, I will repulse them. I am a warrior shaman. I will not allow myself to be taken away somewhere against my will. “.

Lawyer Olga Timofeeva believes that the reason for taking coronavirus tests from Alexander Gabyshev was initially far-fetched. She intends to challenge the illegal forced hospitalization.

After the New Year holidays, the shaman announced a spring campaign to Moscow on a white horse. The supporters were going to accompany him in cars. “The goal remains the same: to reach Moscow, to the Kremlin, to fight there with dark forces, with evil spirits in power. According to the prediction, we will be able to overthrow the demon, and for this we are going,” Gabyshev said.

He added that he, “as a shaman, is predicted that the demon will be overthrown in August 2021.” He noted that he was not afraid to make a new attempt at the campaign, while he did not rule out that they would try to kill him, “because he did not want to obey and did not shut up.”

The shaman’s first trip “to the Kremlin” ended after his arrest on the border of Buryatia and Irkutsk region in September 2019. Before that, the shaman managed to gather several meetings in cities on his way. A criminal case was opened against Gabyshev about public calls for extremism (part 1 of article 280 of the Criminal Code of the Russian Federation).

In May 2020, Gabyshev was forcibly hospitalized in a neuropsychiatric dispensary, he spent more than two months there. The medical commission of the Yakutsk PND issued a conclusion about the danger of Gabyshev for himself and others. After that, the dispensary filed a lawsuit for the compulsory hospitalization of the shaman, stating that he had allegedly voluntarily been treated there before.

Instead of a medical description of Gabyshev’s state of health, the lawsuit stated that he suffers from “an overestimation of his personality”, as he expressed ideas “to harm the government and overthrow Putin” – “the demon and the Antichrist”, and also “called for the overthrow of the legally elected government.”

In August 2020, the Supreme Court of Yakutia upheld the decision of the lower court on compulsory treatment in the neuropsychiatric clinic of the Yakut shaman Alexander Gabyshev.

The human rights organization Amnesty International called the Yakut shaman a prisoner of conscience and demanded his release.