Wine can be good for cores

A substance that lowers blood pressure was found in red wine. This has been proven in an experiment on rats.

It is known that hypertensive men who drink in moderation leave themselves more chances to survive and not die from a heart attack than inveterate teetotalers. Is this true or not, and how to relate to it?

The first time we learned about alcohol as a medicine was in 1991, when a French scientist from Bordeaux, Serge Renaud, stated live on the American CBS channel that alcohol can be not only harmful, but also useful – it can protect blood vessels from atherosclerosis, and the heart – from a heart attack. This was proved by their life experience by the French, who adore fatty and high-calorie foods and rarely sit down at the table without a bottle.

The phenomenon, which then surprised the whole world, was called the “French paradox”. Since then, attitudes towards drinking have begun to change in the world. But only in relation to healthy people: it was believed that alcohol is useful only for them, but in no case for the heart, which includes people with high blood pressure – hypertensive patients. This disease dramatically increases the likelihood of developing coronary heart disease, which means angina pectoris, heart failure, arrhythmia and heart attack, and even stroke. 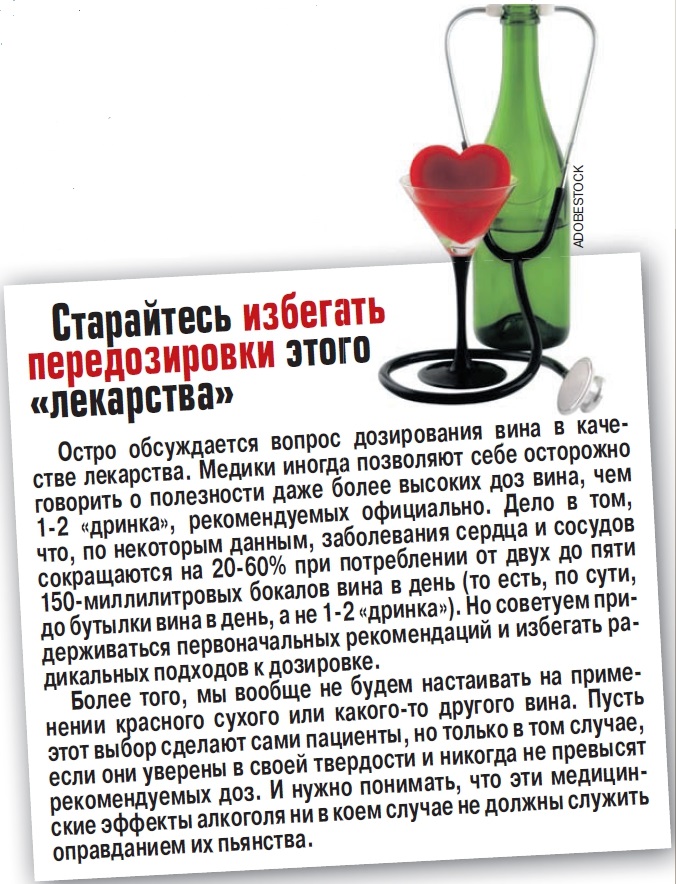 Why did doctors strongly oppose alcohol for hypertension? Alcohol can raise blood pressure, which means that it further increases the risk of heart catastrophes and cerebrovascular accident (stroke). The position of the doctors seems logical. But it was denied by American doctors from Boston. For five years, under their supervision were 14,125 colleagues – men suffering from hypertension. During the observation period, 579 people died due to cardiovascular diseases and strokes. When their lives were analyzed, it turned out that the risk of such death was 44% lower among those who liked to drink slightly, compared with non-drinkers.

We emphasize that the reduced risk was in those who drank moderately, had blood pressure above normal (more than 140/90 mm Hg. Art.) And also treated their hypertension. This is important: in no case should you refuse treatment with drugs – your pressure must be reduced.

Why did alcohol help, despite the fact that it can increase blood pressure? Alcohol, as you know, increases the content of good cholesterol in the blood (it also happens: it prevents bad cholesterol from doing its dirty work), and at the same time it makes the blood more fluid, preventing the formation of blood clots in the arteries. These blood clots are the main cause of heart attacks and strokes. And it looks like these beneficial effects outweighed the negative ones.

Despite the results obtained, American physicians warn colleagues against “prescribing” alcohol prescriptions for hypertensive patients. This “medicine” has a lot of side effects, and it is difficult to dose it. A daily dose of 1-2 drinks is considered to be therapeutic. And one “drink” is only 14-15 ml of pure alcohol: in terms of strong alcohol like vodka, cognac and whiskey – it is 45 ml of a drink, and for wine – one 150 ml glass. Agree, it is even more difficult for us to withstand such a dosage than in the West. So the reason for the cautious position of doctors is justified.

In this study, American doctors did not pay attention to what kind of alcohol their colleagues were drinking: wine, beer, or something stronger. In fact, this question is very important. Serge Renaud, who discovered the “French paradox”, also at first did not pay attention to the type of alcoholic drink, attributing the protective effect to ethanol – wine alcohol, or, as they say, pure alcohol. And since vodka is almost pure alcohol, many considered it the main elixir. This approach was especially relevant in Russia. But, having made a bet on vodka, and at the same time on beer (this is the second most popular drink in Russia), we missed.

The main beneficial components were found to be dissolved in another drink – natural red wine. The Danish scientist Martin Grönbeck showed that among those who consume wine in small or moderate quantities, mortality in general, and from heart and brain diseases in particular, is much lower than among those who take the same doses of alcohol, but in the composition of spirits. Beer drinkers had mortality rates roughly the same as teetotalers … but significantly higher than those who drank wine.

Already after Serge Renaud’s research, which was in the late 1980s, components were found in wine that help protect not only against heart and vascular diseases, but also against lung pathology, Alzheimer’s disease and even some types of cancer. And recently it was discovered that one of the healthiest ingredients in red wine – resveratrol – has the ability to lower blood pressure. In an experiment conducted by scientists from King’s College London, it effectively reduced blood pressure in mice. Later, the researchers also demonstrated that resveratrol acts in the same way on smooth muscle cells in human blood vessels, causing them to relax. The mechanism by which resveratrol works is completely new. Scientists believe that completely new drugs for the treatment of arterial hypertension can be created on its basis.