Why prices are rising

The rise in prices for products, the most important goods and services for people is called consumer inflation. We have this sad tendency, it is enough to go to the nearest store for groceries.

In March, inflation in Russia amounted to almost 5.8% in annual terms. Before that, the worst indicator in recent years was in 2016 (5.4%). Most likely, according to statistics, food prices jump up. Here inflation for the year was 7.58%.

Chickens (14.3%), which until recently had a surplus on the shelves and according to the logic of the market, should have become cheaper. On a seasonal basis, among other things, prices for fruits and vegetables increased (8.74%). Chicken eggs became the leaders in price growth among products last week, according to Rosstat data. The growth was 2.1, and since the beginning of the year they have increased in price by 9%.

Against this background, it is important to take into account such an indicator as the real disposable income of people, in other words, how much money each Russian has in his wallet, and not in the paper reports of officials. So, the real incomes of citizens of the Russian Federation in 2020 decreased only officially by 3.5%. Unofficially, experts count twice as many.

The main macroeconomic reasons here are simple: restrictive measures during a pandemic and a collapse in oil prices. This reduction in income can be safely added to inflation, and then we see a more or less clear picture of a drop in living standards to 9-10%. After all, products and goods with services are practically all that Russians spend their money on. So consumer inflation is synonymous with a decline in the welfare of the people.

The reasons for the rise in prices for food, and at the same time for goods and services are different. Here, both psychological – the general uncertainty of the market in the future, and structural – excessive monopoly distortions in the economy. Social and criminal reasons are also important – corruption, almost complete seizure of grocery trade in the Russian Federation by large retailers.

Of course, the economic reasons for the rise in prices are the most significant. This is primarily the weakening of the ruble. When the currency rises in price, the seeds and fertilizers, equipment and materials purchased for it also rise in price, not to mention the remnants of imported food (which did not fall under import substitution).

A serious rise in consumer prices in 2020-2021 is also provoked by the situation on the world markets for agricultural products. Due to the pandemic, due to poor harvests, there is an increase in exchange prices for the most important food products. By the way, he may not stop now … 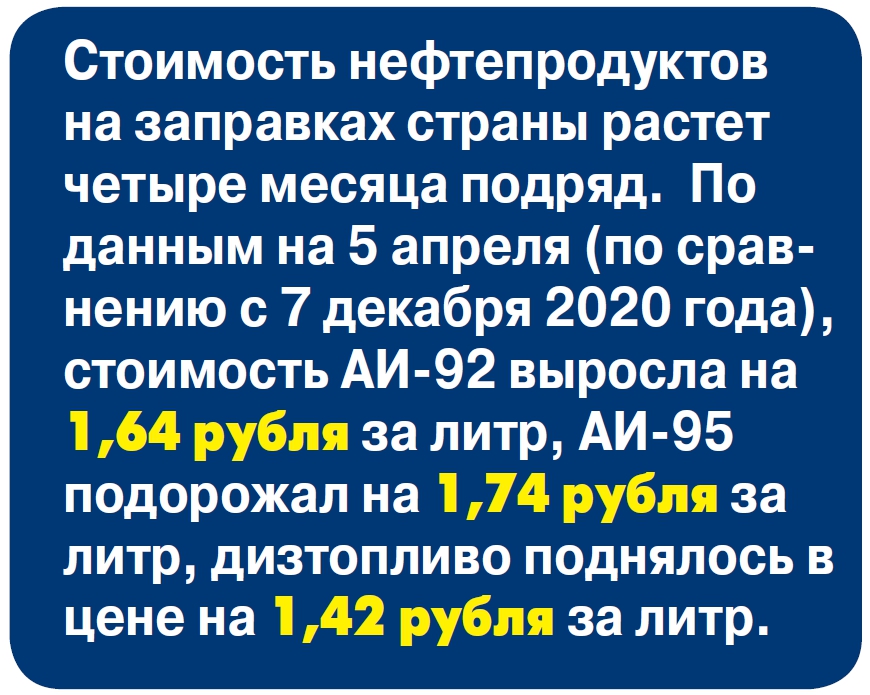 There is also a little-known, but an important additional factor in the rise in prices for products and goods – container. And this is not the largest accident in the Suez Canal. The fact is that quarantines began in the United States a year ago. The processing of arriving goods has almost stopped. Tens of millions of containers remained at the point of arrival. And this despite the fact that China restored production and exports, sent cargo from Asia to America, but more than half (up to 60%) of the containers did not return back. And by August 2020, an acute shortage of sea containers began in China.

Prices for the transportation of goods from Asia began to rise. Shipping by containers from China to the United States has more than doubled in price. And textiles transported in containers and many food products began to seriously add to the price. Even the accelerated production of new containers did not help – their increased rent turned out to be unbearable for many carriers.

This whole story also hit Russian food prices, because, whatever one may say, we still continue to depend heavily on the global sales market. Many food products (the same sugar and butter) were found to be more profitable for our producers and traders to sell abroad. Accordingly, prices in stores in Russia have gone up.

FIGHT IS NOT A JOKE

Our government has taken the path of freezing prices for sugar and sunflower oil. Manufacturers of these and other vital products agreed in March to fix selling prices for the next two months. In return, the state promised them subsidies. They managed to stabilize prices, but they did not take into account the problems of production of products using grain and sunflower oil. Nothing was regulated here, so, for example, the prices for confectionery products increased significantly.

What else is the government doing? A decision has already been made, according to which the timing of officials’ response to price increases has been reduced. Now you no longer need to wait for a 30% rise in food prices per month, the bar has been lowered to 10%.

The dynamics of prices will be monitored by the Ministry of Economic Development together with Rosstat and the Federal Antimonopoly Service (FAS). Other measures are not yet visible, and it is difficult to imagine them in the current economic realities.