Why do we need vitamin K2

Vitamins are medicines for all occasions. Drink vitamins – we habitually advise relatives and friends for any health problems. Doctors also recommend them to almost everyone and almost always. They entered not only our flesh and blood, but also our consciousness. But, oddly enough, we, including doctors, know very little about them.

For example, the most famous and promoted vitamins are C (ascorbic acid), D, A, E, and one of the most unknown is vitamin K.

Doctors remember that it improves blood clotting, but patients’ knowledge about it tends to zero. In fact, the most amazing discoveries in vitamins in recent years have been directly related to it. And it is with this organic compound that great hopes are pinned in the fight against the main diseases of civilization. But first things first.

Vitamin K was discovered in 1929, after establishing that it is needed for blood clotting. And only in 1997, the official scientific community agreed to admit that it is also important for bone health. It turned out that he works in a company with two more vitamins – D and A, acting as a kind of regulator – directs calcium where it belongs and takes it from where it should not be. And this is extremely important for health, and not only for bones, but also for blood vessels (surprisingly, scientists still prefer not to discuss this effect of the vitamin).

So why is calcium so important for blood vessels? This is an amazing element, it makes everything durable. Therefore, there is a lot of calcium in bone tissue and teeth under strong stress. But by giving rigidity to the vessels, he seriously harms – he has no place there. Unfortunately, calcium is often deposited in the cholesterol plaques, making them very dense. As a result, the lumen of the vessel narrows, and its wall collapses. All this leads to blood clots or rupture of blood vessels, which means to heart attacks, strokes and internal hemorrhages. These conditions are often fatal.

How could vitamin experts have overlooked the important effects of vitamin K for so long? They just turned a blind eye to many facts. Vitamins are generally not as simple as they seem and as some scientists associated with multivitamin manufacturers want to present them in our eyes.

For example, they like to talk about vitamins in general – vitamin E, vitamin K. Meanwhile, the term vitamin E hides eight different substances – they are similar, but somewhat different. And each of them has its own specific properties. Instead of studying each of these substances, scientists chose only one, and all of its effects are attributed to the entire group, calling it vitamin E.

Something similar happened with vitamin K. Experts knew that it consists of a mixture of several similar substances, the main of which they called vitamin K1 (phylloquinone) and vitamin K2 (menaquinone). Since the first in the products was 10 times more, they gave him the palm, but K2 was not seriously studied. And, as it turned out, in vain. All beneficial effects in addition to blood clotting are associated only with vitamin K2, and K1 in this regard is completely zero. Scientists today even say that the pair should be separated and treated as two different vitamins. And this is normal, we have a whole group of B vitamins – B1, B2, B6, B12. It turns out that scientists have discovered a new vitamin. We wanted the best, but it turned out …

Ironically, throughout the twentieth century, well-meaning physicians have done everything possible to banish vitamin K2 from our diet. And they succeeded – the most useful vitamin is now in short supply. Judge for yourself. Vitamin K1 is found in green leafy vegetables such as cabbage, salads, as well as wheat and other grains. But there is little K2 in them, it was synthesized from vitamin K1 in the body of animals and birds that eat grasses and grains.

Since it is a fat-soluble vitamin, it accumulates in the fat of animals, as well as in milk and all the products that are made from it. Now remember the main dietary principle of the 20th century: meat, poultry and dairy products should only be low-fat. And, we add on our own, – devoid of vitamin K2.

Butter, one of its main sources, was exchanged for margarines. And the animals themselves and the bird almost ceased to be fed with green grass and cereals, they were transferred to feed devoid of vitamin K1. As a result, our smaller brothers also stopped synthesizing K2 for us. Butter and other dairy products have become predominantly unhealthy. Meanwhile, the daily requirement of an adult for vitamin K2 is about 70 mcg …

The circle is complete. To break it, the scientific and medical community needs to admit its mistakes and change the current rigid model of medical knowledge. But this is very difficult to do …

VITAMIN K2 AND ITS ROLE IN THE BODY

• Vitamin K2 is an essential vitamin for bone health and strength. The results of numerous studies have shown that taking vitamin K2 completely eliminates bone loss (and in some cases even contributes to its increase in patients with osteoporosis) and reduces the risk of fractures by up to 87%. At the same time, when taking vitamin K2, no side effects were observed for several years.

• A huge risk of developing cardiovascular problems is the process of calcium deposition in soft tissues and organs – calcification. Research shows that vascular calcification can be prevented by regular intake of vitamin K2. A large study from the Netherlands showed that vitamin K2 supplementation reduced the risk of severe arterial calcification by 52%, the risk of coronary artery disease (CHD) by 41%, and cardiac mortality by 51%.

• Vitamin K2 is an essential element for the synthesis of a very important family of lipids in the brain and nervous system, the so-called sphingolipids. Its inadequate intake is a risk factor for the development of cognitive impairment. Regular intake of vitamin K2 can significantly slow down age-related neurological degeneration.

• Research shows that the overall risk of diabetes in people with high levels of vitamin K2 is 51% lower than in those with low levels. The researchers concluded that dietary vitamin K2 supplementation reduced the risk of type 2 diabetes.

• At the core of Alzheimer’s disease is neuronal death associated with oxidative stress. Although vitamin K2 is not a direct antioxidant, research shows that high levels of vitamin K2 can inhibit oxidative damage to neurons. 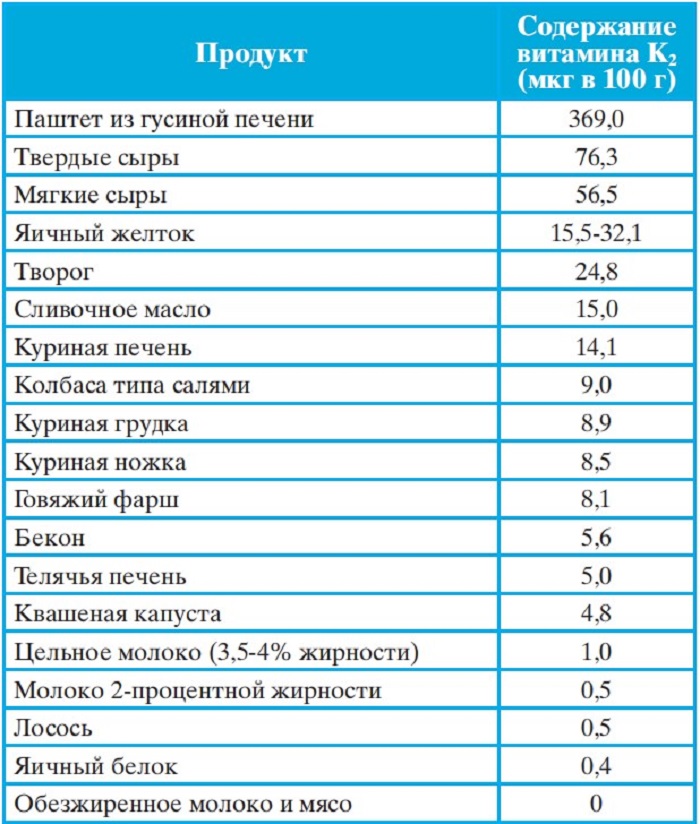