Who invented the salad “Olivier”

The Olivier salad is a traditional dish of Russian cuisine, the history of which goes back to the times of tsarist Russia. Originally it was invented as a gourmet salad gourmet, but then the recipe has undergone significant changes and became public property. Now, almost none of the Russian holidays can't do without this dish. Moreover, Olivier has spread almost all over the world. How it all began? 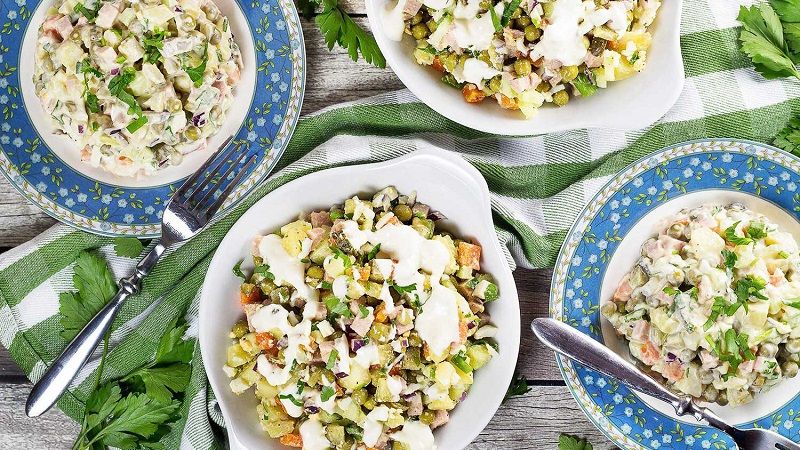 History and the first recipe

Genuine salad "Olivier" was coined in the 60-ies of the 19th century. The authorship belongs to Russian French origin Lucien Olivier, who was chef and part-owner of the restaurant, the Hermitage. This place was one of the most prestigious and popular in Moscow, so the task of Lucien to come up with an unusual dish, meet the needs of the lovers from high society.

For the meals were chosen very elegant and unusual for our time the ingredients. The main item was a boiled fillet of a hazel grouse or partridge. The leaves of lettuce laid out alternately the shredded meat with cubes of jellied chicken broth. Then added boiled cervical cancers and slices of veal tongue. On top is a good brand flavored mayonnaise sauce, and the center of the plate was decorated with boiled potatoes, pickled cucumbers and slices of boiled eggs.

According to the idea of Lucien, "the hill" in the middle played the role of decoration. However, very soon the man noticed that the customers liked to mix designer delicacy in a heap. At first, the chef is angry, but then he resigned and began to prepare themselves all mixed up, tucking components of the mayonnaise sauce. In this form the salad, which was named after the chef, it quickly became popular among Muscovites became a distinctive feature of the restaurant.

The highlight dishes were the original mayonnaise, which is prepared by the chef himself-chef special recipe. Its ingredients tried to find out many cooks, but they failed to unravel the secret of Olivier. So the salad with the original taste could be tried only in the Hermitage.

Presumably, Lucien was preparing a mayonnaise of French wine vinegar, mustard, and provençal olive oil, and at the end added some herbs, but the exact method of preparation so nobody knew.

Known the chef for some reason did not write down their recipes, as did the other chefs of the era; hence, the recipe died with its author, so exact original form we cannot know. Various historical records indicate that Olivier was part of foods such as capers, caviar, smoked duck, soy beans and truffles. This does not necessarily mean that all of these versions incorrect. 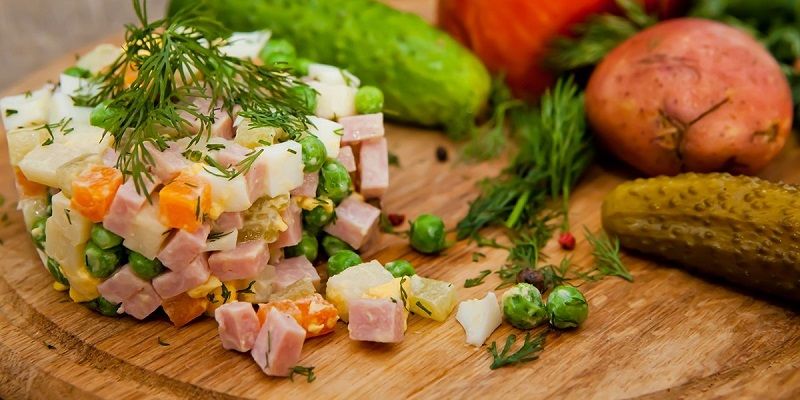 Perhaps the chef had used different products, depending on the season or the requirements of the post (for example, the Orthodox Church forbade the consumption of certain foods during lent).

The further spread of dishes

The most successful attempt to steal the idea, Olivier made one of his chefs, Ivan Ivanov. He saw for cooking, and was able to write about what is in the famous gas station. At the beginning of the 20th century, Ivanov left the Hermitage and went to another, less well-known institution, which has started to serve a very similar salad under the name "Capital". However, foodies of the time reported that the gas station it was inferior to the special mayonnaise from the Hermitage. Apparently, Ivanov is still missed something.

Later Ivan has shared his recipe with publishers of different Newspapers and books, and thus contributed to its spread across the country. In 1905 the Hermitage was closed, and the Olivier family left Russia, so now their property could safely call his name. 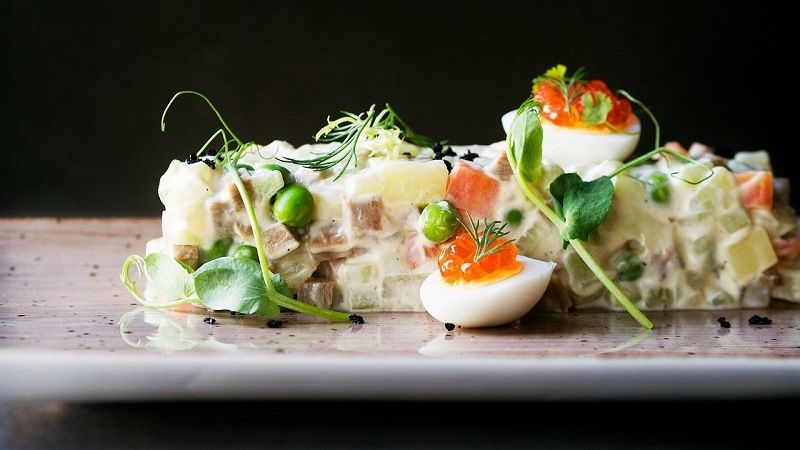 So, in a cookbook in 1894 he published the recipe with the following components:

During the revolution many Russians had to leave their homeland, and they left for the world, making about "Olivier" found in other countries.

Salad experienced the new birth under the Soviet regime. As often happens with gourmet who come to the masses, expensive, rare or seasonal products gradually replaced with cheaper and more widely available. Today's dish only slightly resembles true creation of Lucien. Then the meal was replaced with chicken or sausage-type "Doctor", crayfish – egg. The olives and capers was expelled from the recipe and added green peas. As a dressing, use regular mayonnaise. 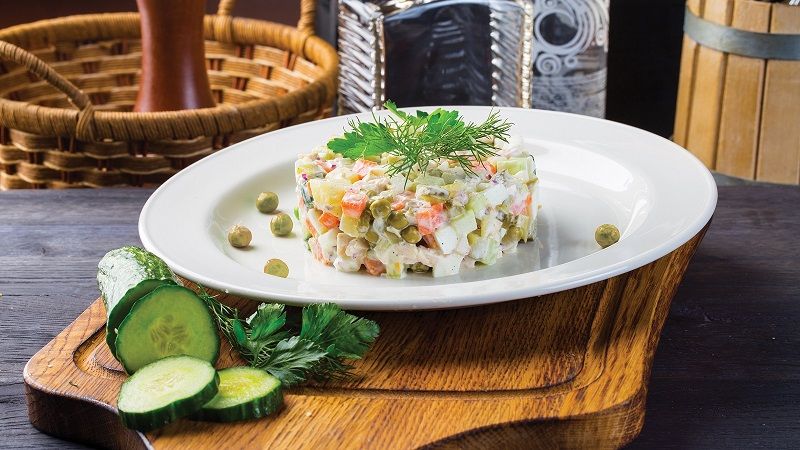 Different chefs have different opinion on whether "olive" bow. Many believe that his add is not worth it, others add green or chopped onion. As a compromise, you can use the onion, scalded with boiling water; so it loses sharpness, it remains only a sweet taste.

Despite the fact that now in Russia is widely available in more exotic products, the popularity of classic "Olivier" hardly diminished: this salad is the most traditional dish of the New year. Its presence on the table is just as important as the presence of champagne and tangerine.

The most common alternative modification "Olivier" – this is the "Capital", which is present instead of sausage boiled or smoked chicken.

In General, there are a great many varieties "Olivier" with various combinations of products. As a rule, the main ingredients are only eggs, potatoes, green peas and mayonnaise sauce; the other components is a matter of taste and imagination.

Just put some pickles, others prefer fresh, others replace them with olives/olives. There are options that will include fresh salad, pickled tomatoes, apples, nuts, and fruits. Instead of sausage, it is permissible to take the different meats (lamb, duck, pork), fish or seafood. And, you can decorate the dish of cranberry berries, herbs.

Hash is also a version of "Olivier", only it has the form of soup. For its preparation the same, the ingredients fill it with kvass or whey, which gives the dish a totally different taste. 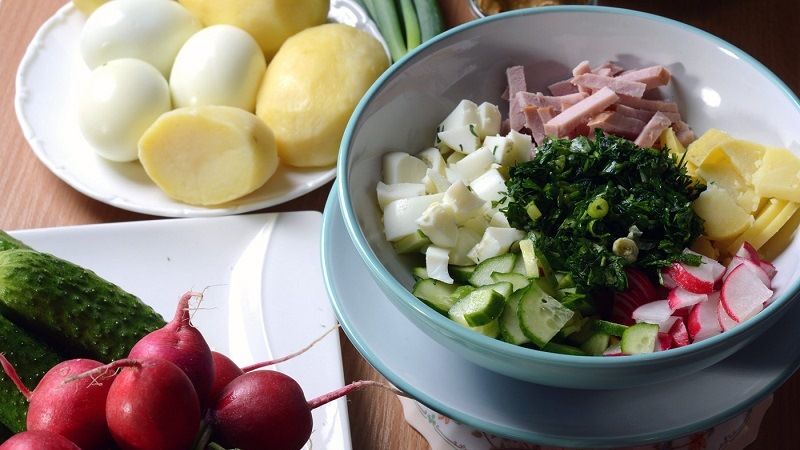 Olivier in other countries

Variations of "Olivier" can be found in almost any Eastern European country, Ukraine and Bulgaria to Poland and Hungary. In many countries it is called Russian or potato salad, while others retain the original name. In Croatia and Slovenia decided to cook vegetarian "Olivier", which is French styled. The Greek version also contains no meat.

In Spain many bars are often served so-called "little Russian salad", with almost the same ingredients as classic Russian "Olivier" salad, only instead of sausage, the Spaniards added canned tuna. In Italy the "Insalata russa" the same components. This version is popular in Portugal, where it is called "salada russa". 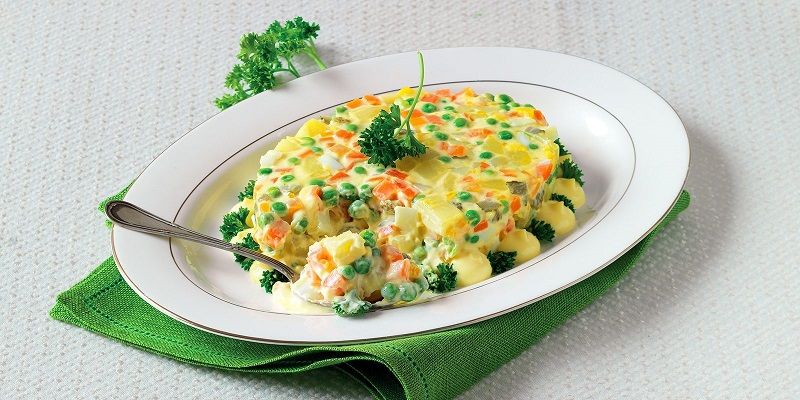 Also there is an Asian interpretation of "Olivier". The Turkish version consists of boiled carrots and potatoes, pickles, boiled peas and mayonnaise. All this is decorated with boiled, sliced eggs and black olives. In Pakistan and India dish made from potatoes, peas, apples/pineapples and mayonnaise sauce.

Due to immigration of Italians, Spaniards and Europeans, Olivier is also very popular in Mexico, Ecuador, Peru, Argentina, Paraguay, Uruguay, Brazil and Dominican Republic. In "ensalada rusa" has a minimum of products: boiled potatoes, carrots, asparagus and a rich dressing based on mayonnaise. In Argentina it is usually served as a first course or with very thinly sliced beef roll called matambre.