Looking out into the yard, Joanne Mason noticed a squirrel with which something was wrong. Looking closely, a resident of Allegan (Michigan, USA) understood the reason. 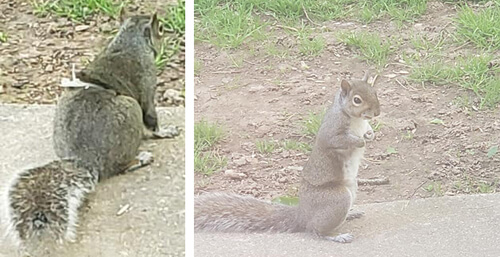 The animal sported a “white belt”, but you can’t call such an accessory safe. On the body of the squirrel, a white fastener-screed was stuck. Using social media, Joanne found a woman named Mary Humphrey, who helps to catch animals that have escaped from their owners. Mary came to visit Joanne and set a trap in her garden. Then it remained only to watch anxiously whether the squirrel would be seduced by the edible bait. The idea of ​​the rescuers was a success, and soon the animal found itself in a trap. Putting on thick gloves, Mary grabbed the animal and cut the clasp that was in the way.

Both women are very happy that they were able to help the squirrel, which, by the way, received the nickname Mr. Zippy (Mr. Zippy) – from the English expression “zip tie” (that is, a fastener-screed).