Where to find Unclear Glade

Who shod a tree and Bear-Pasternak

Far from prying eyes, the hustle and bustle of the megalopolis, the town of Peredelkino is located. Cozy houses, fabulous nature and the atmosphere in which our famous writers worked attract many tourists. They enjoy listening to local stories and looking at the curious exhibits of house-museums.

Neither on the maps, nor on the documents of Peredelkin does not exist. The fact is that in the 90s, an employee of the local administration, offended by the fact that he was not given a dacha here, issued a decree on the joining of the village to the Michurinets DSK. Since then, everything has remained so.

The history of the village began in 1933. According to the legend that has come down to us, allegedly Maxim Gorky advised Stalin to adopt the European experience and build a village for Soviet writers in which they could live and create in nature. The leader thought and decided that the “writers’ collective farm” would fit well into the five-year plan, and ordered to build exactly 50 houses for engineers of human souls. “It would have been better not Peredelkino, but Perepiskino,” he joked, smoking his famous pipe.

BEAR-PESTERNAK AND GARDEN WITH CABBAGE

Boris Pasternak became one of the first settlers of the dacha village. Initially, he occupied a dacha on the street. Trenev, but in 1936 he moved to st. Pavlenko, where today a house-museum is open, in which you can still feel the life of half a century ago.

According to the guides, this is the only dacha in the village where there was never a telephone during the poet’s life. It was such a way to escape from the bustling Moscow. Indeed, before Peredelkin, the poet had not written a single poem in 10 years.

Being in Pasternak’s house, it is enough to look around, consider the situation and feel: everything that surrounded the poet somehow entered his work. Pine trees outside the window, a piano, a pier glass, an inkwell, flowers, an apple orchard, planted by him. The views and atmosphere of the village are often mentioned in the poems of Boris Pasternak. He also christened the field next to his house Neyasnaya Polyana, by analogy with Yasnaya Polyana Tolstoy. 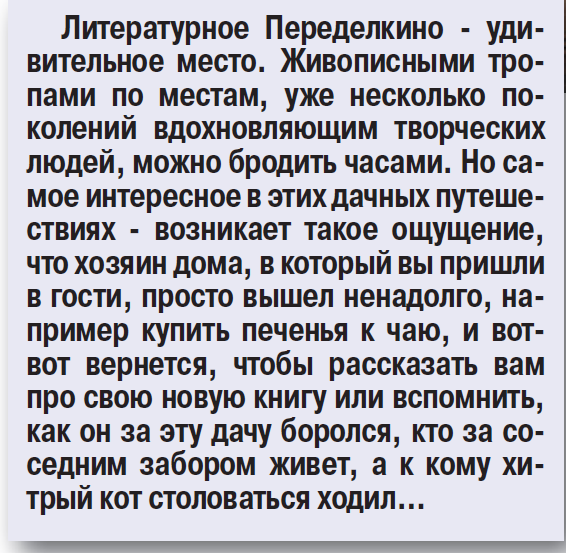 He was surrounded by simple things, only what was needed for life. The writer’s office is spacious and almost empty; it is here that many of his poems and the novel “Doctor Zhivago” appeared. Immediately he learned about the award of the Nobel Prize in Literature.

At the same time, Pasternak’s life in Peredelkino was not devoid of traditional dacha concerns. For example, right in front of the house, cabbage beds were laid out, which he tended. Every spring he dug up the garden himself.

Boris Pasternak walked a lot in the Peredelkino forests. During his walks, he was certainly accompanied by the dog Mishka, a shaggy black mongrel. The neighbors loved Mishka very much for his kind disposition and delicacy, and with reverence they called Mishka-Pasternak. And when once in the winter in the Moscow region stray dogs were shot to prevent rabies, Boris Leonidovich specially came from Moscow to warn the dog not to go out on the road. Oddly enough, Mishka understood everything and stopped walking around the village …

Just five minutes of a leisurely walk separate Pasternak’s house from the dacha of another poet, Korney Chukovsky.

Already at the entrance to the site, tourists are waiting for an unusual exhibit – a tree hung with boots, boots, felt boots … Created by the efforts of the museum workers, it looks like from Chukovsky’s poem “The Miracle Tree”.

It is said that a large maple tree in front of the house once suddenly found itself without foliage. Everyone decided that he was dead and were going to cut him down. But one fine day the director of the museum came here with a large number of worn children’s shoes and hung them on an old maple tree. After that, the tree was again covered with foliage.

Korney Ivanovich settled in a dacha village in 1938 on one of the main streets. He got an unplastered house with no planks. The neighbors joked that it was the last to be built, and that there was not enough wood. 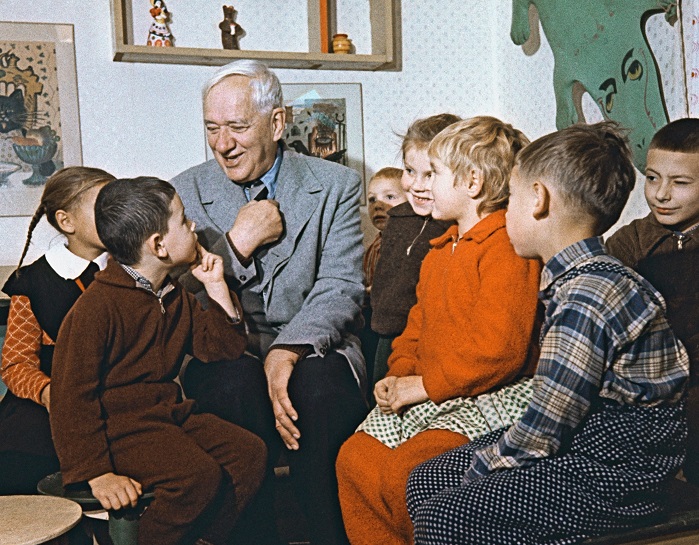 The people of Peredelkino lived merrily, went to visit each other, played volleyball during the day, and in the evening discussed novels, often not written, but heartfelt … And three years later the Great Patriotic War began. An anti-aircraft battery was located in Chukovsky’s house, and soldiers lived. After the war, the house was preserved, and the poet’s library remained intact.

Books have always been an adornment of the Chukovskys’ house, where the smallest residents of the village often stayed. The children were especially delighted with a simple home-made chandelier with images of famous characters in the poems of Korney Ivanovich, which was made by a fan of the writer. And the fires of Chukovsky became almost legendary, around which the characters from “Fly-Tsokotukha”, “Aibolit” and “The Adventures of Bibigon” were danced and revived to the accompaniment of music. By the way, thanks to the efforts of the museum staff, bonfires are still held here and every year hundreds of children and their parents gather.