Volodin: The Czech Republic announced the involvement of the GRU in the explosions under "pressure" USA 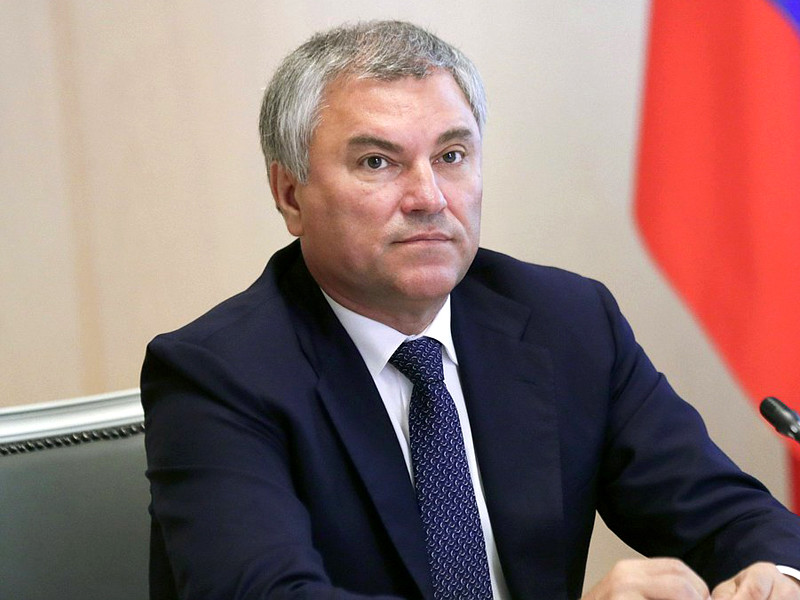 State Duma of the Federal Assembly of the Russian Federation

Russian State Duma Speaker Vyacheslav Volodin believes that the Czech Republic announced the involvement of Russian special services in the explosions at an ammunition depot in 2014 under pressure from the United States. According to Volodin, the American side thereby disrupted negotiations on the supply of the Sputnik V coronavirus vaccine to the Czech Republic.

“Last week we went out with a request to receive a colleague [вице-премьера Чехии] Yana Gamacek. The meeting was scheduled for Tuesday 20 April. The question he was traveling with was negotiations with the head of the Ministry of Industry and Trade Denis Manturov on the supply of the Sputnik V vaccine to the Czech Republic. But Hamachek canceled the trip at the last moment, “Volodin said, quoted by TASS.

According to the speaker of the State Duma, “this can be perceived as pressure from the United States,” which “forced the Czech side to abandon the trip.” “The actions of the United States are aimed at suppressing the dialogue between Russia and European countries under the far-fetched pretexts of many years ago,” Volodin is sure.

He called it obvious that the development of Russia as a strong sovereign state is unprofitable for the United States and its allies. Moreover, according to him, the very idea that our country can take its rightful place on the world stage is unacceptable to them. “It is with this that Volodin linked Washington’s hysteria, which has been observed recently,” writes Rossiyskaya Gazeta.

The speaker believes that other attacks on Russia will follow in the near future from the United States. They will be directed to the industry, the fuel and energy sector of the Russian Federation. Their goal is to stop the economic development of the state.

“Therefore, if we think about our country, we must finally understand the cost of all these accusations,” Volodin said. He called for everything possible to prevent foreign interference in the country’s sovereign affairs.

The speaker recalled that in recent days the US President, Western politicians and a number of cultural figures have made statements with concern about the observance of human rights in Russia. Commenting on such statements concerning, for example, the persecution of opposition leader Alexei Navalny, Volodin stressed that Washington has no moral right to such criticism. There was no such rhetoric in the 90s, “when human rights were violated everywhere,” the parliamentarian said. This, in his opinion, is due to the weakness of the Russian Federation at that time. Accusations of human rights violations against Russia came “exactly from the moment the country began to solve internal problems and strengthen itself in the international arena.”

In this context, Volodin drew the attention of those criticizing the situation around the founder of WikiLeaks, Julian Assange, and a former employee of the US National Security Agency, Edward Snowden. According to the chairman of the State Duma, both Snowden and Assange “acted in the interests of citizens of the whole world – by publishing information and speaking out in defense of human rights.”

At the same time, it is even impossible to find out about the state of health of the same Assange, as Volodin noted – this is the fault of the position of the States, “the dark affairs of which and their NATO allies he revealed.” After all, human rights defenders are not allowed to see him. According to the parliamentarian, a similar situation would have been with Snowden, had he not happened to be on the territory of the Russian Federation.

Volodin believes that if they made similar discoveries and publications regarding Russia or China, then “statements on their protection and glorification as freedom fighters would have sounded from everywhere.” After all, we would be talking about countries that compete with or “interfere” with Washington.

The speaker added that it is necessary to assess the actions of the authorities of those countries where human rights are violated, and to speak out in support of human rights defenders suffering from these regimes. In the United States, he noted, these are “citizens who came to discuss the election results and are accused of terrorism” (punishment – 25 years in prison). In the Baltics, Ukraine, Great Britain, according to Volodin, there are also “convicted and persecuted.” The Russian parliamentarian promised to study materials about the fate of people who suffered for the protection of citizens’ rights from the authorities of these states.

On Sunday, April 18, Czech Prime Minister Andrei Babish announced that the government would consider the data of the Security Service and information about the involvement of Russian special services agents in the incident in Vrbetica, after which the documents could be declassified.

Earlier, the Czech Republic notified Russia of the expulsion of 18 diplomats from the country, since it has information about the involvement of Russian special services in the explosions at two ammunition depots in Vrbetica. This happened on October 16, 2014. Both warehouses were leased by the Imex Group. The explosions killed two people.

The sabotage, according to the Czech police, could have been arranged by two Russians – colonels of the GRU and Heroes of Russia Alexander Mishkin and Anatoly Chepiga. They also appeared in an episode with a chemical attack in Salisbury, British, where ex-GRU colonel Sergei Skripal and his daughter Yulia were poisoned in 2018. Mishkin and Chepiga entered the UK as Russian tourists using passports in the names of Alexander Petrov and Ruslan Boshirov.

According to the Czech side, the GRU agents issued a permit to visit the warehouse, and before that entered the country with fake passports of Moldova and Tajikistan. Both alleged saboteurs are wanted.

Also in Prague, they believe that information about the progress of the investigation should be hidden from Moscow. “The Russian side should not know everything we know about that operation,” said Jan Hamacek, Minister of Internal Affairs and Acting Foreign Minister of the Czech Republic. His words are quoted by RBC.

According to the politician, one should expect that Russia will defend itself against accusations of involvement in the explosion. “I do not exclude that documents will appear that will try to refute the Czech version. A police investigation is underway,” Hamacek added.

On Sunday, Czech Prime Minister Andrei Babis said that the government would consider the data of the Security Service and information about the involvement of Russian special services agents in the incident in Vrbetica, after which the documents could be declassified.

Earlier Jan Hamacek also said that the ammunition may have been planned to be detonated later, after being transported to Bulgaria. According to investigators, a 67-year-old Bulgarian arms dealer, owner of the Dunarit arms company Emilian Gebrev, who was allegedly poisoned by chemical weapons from the Novichok family in 2015, participated in the purchase of ammunition. The ammunition stored in the warehouse could be intended for delivery to Ukraine or Syria, that is, to those theaters of military operations where either the Russian army or pro-Russian armed formations are fighting.

The Czech investigation led to a major diplomatic scandal. First, Prague expelled 18 Russian diplomats. And then Moscow declared 20 Czech diplomats persona non grata. The work of the embassy of this country in Moscow was practically paralyzed.

Russian Foreign Ministry spokeswoman Maria Zakharova called Prague’s actions caricatured and said that the statements of the Czech side were intended to “block” messages in the Western information space about the disclosure of plans for a coup d’etat in Minsk by the Belarusian and Russian special services. At the same time, Gamachek’s statements that information about the investigation of the incident will not be transmitted to Moscow confirm that this is a fake, the Russian diplomat later emphasized.