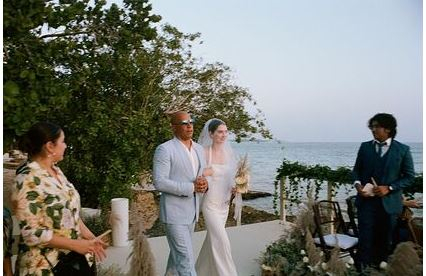 American actor Vin Diesel took to the altar the daughter of actor Paul Walker who died in a car accident during her wedding. The corresponding photo appeared on Meadow Walker’s Instagram page.

22-year-old model married actor Louis Thornton-Allan. The wedding ceremony took place at the beginning of the month in the Dominican Republic, but the press became aware of this only now.

In the video posted on the network, Vin Diesel, who is a close friend of the family, is captured in a blue suit along with the hero of the occasion, dressed in a wedding dress.

Paul Walker crashed in a car accident in November 2013. The Fast and the Furious actor, also known for his roles in films such as Run Without Looking Back, Flags of Our Fathers and Pleasantville, was 40 years old. Fast and Furious 7, which was released on Russian screens on April 9, 2015, was Walker’s last film to play in all episodes of the franchise, except for the third. At the time of the actor’s death, Meadow Walker was 15 years old.