Veterinarian begins to use traditional Chinese medicine to treat animals

Li Wen is sure that traditional Chinese medicine (for example, acupuncture) can help not only people, but also animals. 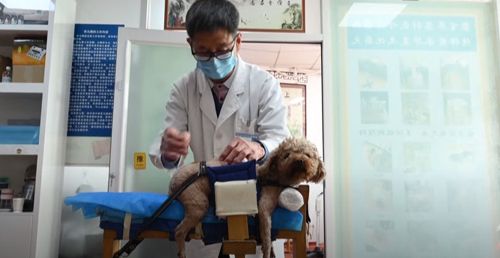 That is why in 2016 a veterinarian from Beijing (China) opened a clinic where pets are helped by non-standard methods. Li mainly deals with cases of paralysis, weakness of the limbs, epilepsy and urinary retention. To relax patients, the clinic plays soft music played on bamboo flutes, as well as recordings of bird chirps. True, the doctor admitted that approximately 1-2 patients out of every 10 turn out to be rebels and are very nervous. And here the main principle of Lee’s work is a gentle attitude towards animals. He tries to reassure the animals that they will not be hurt, but rather helped.

Lee added that his clinic should not be seen as the only source of help for pets. He is not against official medicine, believing that it has many advantages. Just two medicines should go side by side and complement each other.

To support the dog, the owner put a veterinary collar around his neck