The Vepsians are one of the small northern peoples, living mainly in the Leningrad and Vologda regions of Russia and in the Republic of Karelia. According to the 2010 census, their number is about 6 thousand people. The ancestors of this people were the Finno-Ugric tribes living near the Baltic Sea. Having preserved their national identity, their language, peculiar rituals, customs and traditions, the Vepsians are of interest to modern historians and ethnographers. 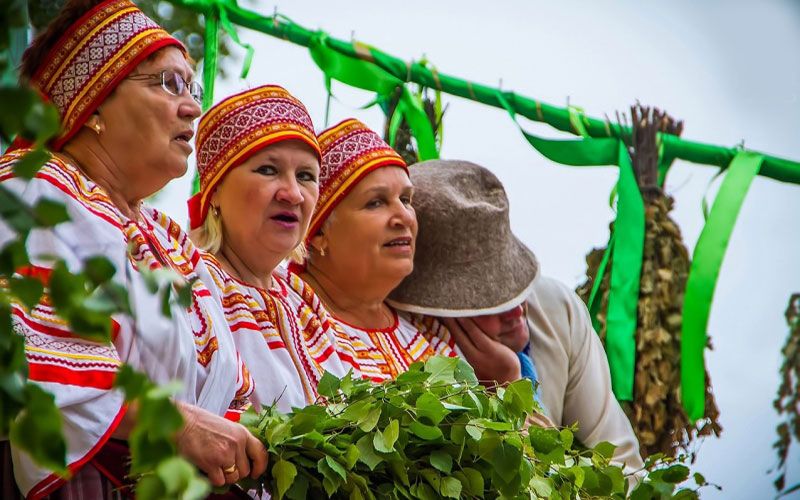 Most Vepsians profess Orthodoxy, however, having adopted Christianity in the 12th century, they have not forgotten their pagan roots. There are interesting facts about the traditions of the Vepsian people regarding beliefs. Thus, the Vepsians believe that in addition to the Almighty, there is a living force in the world with which it is necessary to maintain friendly relations. They believe in the yard, barn, humane, bathhouse owners, they revere house spirits, water spirits, forest spirits, and always please them with sacrifices or treats. This people has preserved ancient pagan rituals, which, according to legend, have a healing, protective or punishing effect, they are carried out using salt, water and plants. 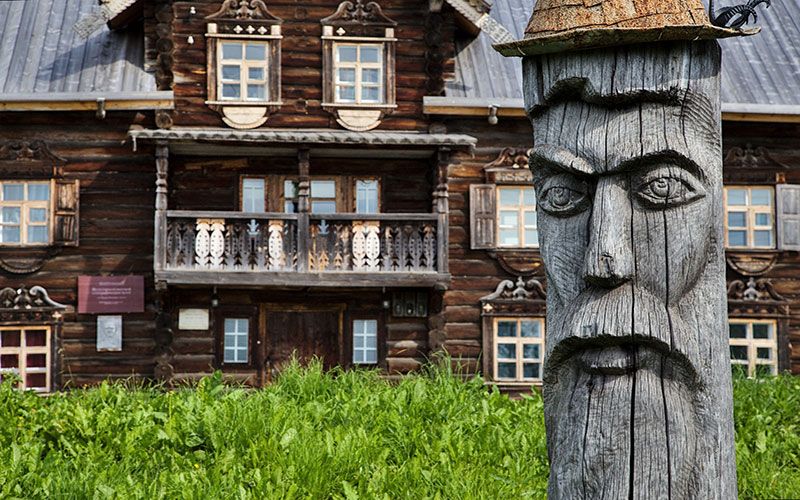 Among the Vepsian church holidays, first of all, are patronal ones. Their dates in each parish depend on the fact in honor of which saint or significant event in the life of the community the holiday is established. Many festive rituals are also associated with agricultural activities, they are based on the so-called “magic of the first day”: the beginning of sowing, harvesting, the first pasture of cattle.

The Vepsian year begins with the multi-day Syndyma holiday, which is celebrated from the Nativity of Christ until Epiphany. During this period, there should be a lot of good food on the table so that the whole year is full. Maslenitsa ended the winter period, after which Great Lent began.

Next on the calendar are: 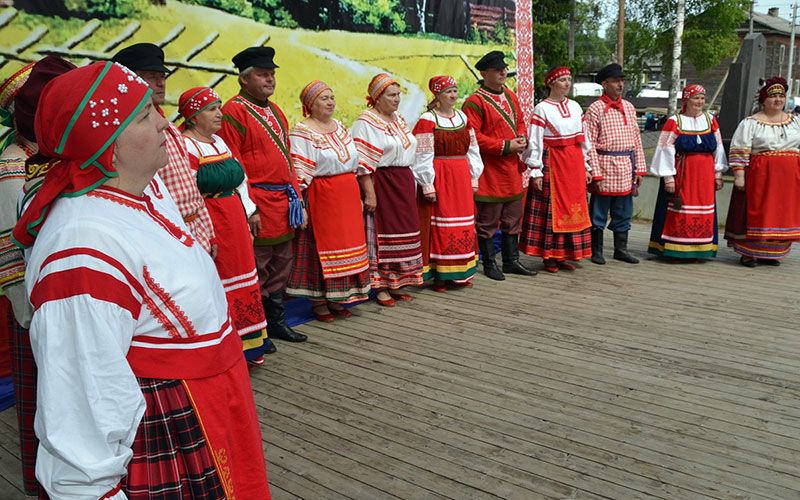 In our time, the Vepsians have new interesting cultural traditions. In June, on the shore of Kod-lake, with the support of the Department of Culture of the Vologda Oblast, the annual Tree of Life festival is held, which brings together several thousand people from different regions of Russia, Finland and Estonia. In July, in the Lodeynopolsky district of the Leningrad region, the traditional holiday of the national Vepsian culture “Enarnema” is held, in which amateur art groups take part.

The national traditions of the Vepsian people include all spheres of the material, social and spiritual life of the people. The Vepsians are characterized by living in small communities, the main occupation was agriculture. Men were also engaged in fishing and hunting, women in weaving, sewing and making products from birch bark.

Veps national clothes were distinguished by skillful embroidery. Men wore shirts with a stand-up collar, sewn from homespun canvas and wide trousers, women wore sundresses made of bright fabrics. The girls walked with their heads uncovered, their hair was braided and decorated with ribbons. Married women wore bonnets – headdresses in the form of a hood that covered their hair. 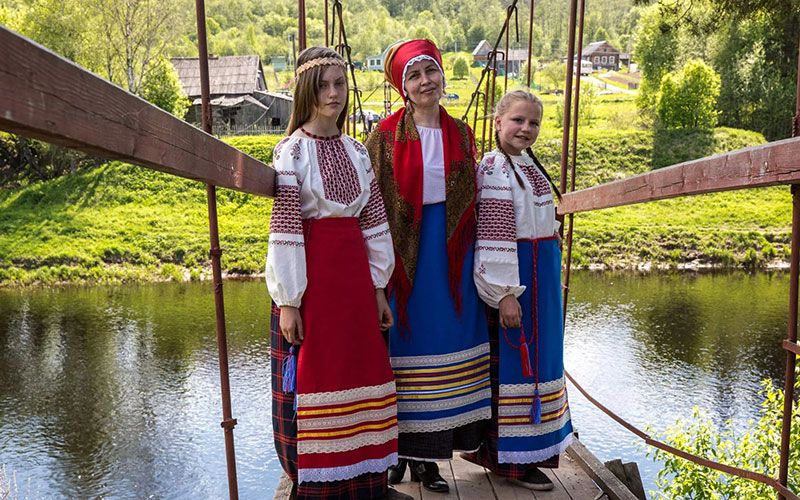 Almost all significant events in the life of the Vepsian people are accompanied by traditional ritual actions. There are so many wedding rituals that there were special books in the communities where the order of their conduct was recorded.

The wedding was preceded by a conspiracy, which resolved issues about the dowry and organization of the upcoming wedding. The day before the appointed wedding, a bachelorette party was traditionally celebrated in the bride’s house, and a bachelor party in the groom’s house. On the day of the wedding, the groom’s relatives gathered at his parents’, dined, leaving financial assistance on the table for the wedding. Then the cortege went to the house of the bride’s parents, where he was greeted with wedding songs and invited to the courtyard. 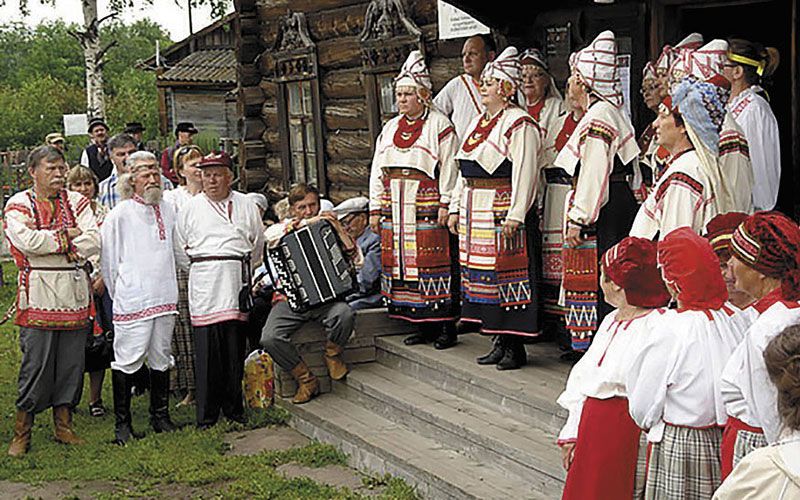 Unlike the rest of the guests, the groom had to enter the house through a story – an outbuilding adjoining the house. The groom could sit at the table next to his betrothed only after his friend handed over the “payoff” to the matchmaker for the bride. At the festive table, all guests were given gifts – embroidered towels, fabric cuts for a shirt or skirt.

This was the end of the first part of the wedding. The bride and groom were placed on a sheepskin coat turned inside out, and the groom’s friend or his godfather blessed the newlyweds, placing an icon and bread on their heads three times. Then everyone went to the church where the wedding was held.

After the wedding in the church, the wedding continued in the groom’s house, where he carried his wife in his arms. The young were greeted by the father-in-law and the mother-in-law with an icon, bread and salt and a sieve full of grain. Before sitting at the table, the young wife was braided with two braids and put on a “warrior” – a female headdress worn by married women. The young people were taken to sleep in a separate room, and they were locked there until the morning.

The last wedding ceremony is the public delivery of the wife’s dowry to the young husband. It was brought three days after the wedding, the dowry usually included sets of bed linen, fabrics for tailoring, dishes and other things necessary for the household. 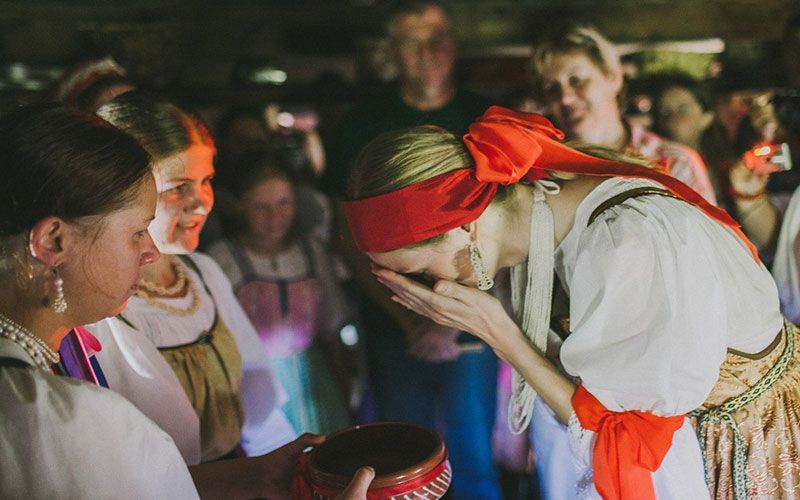 After death, the body of the deceased is washed, most often older women are invited to perform this ritual. In the house where the person died, the window and mirrors are curtained, and an embroidered towel is hung in the front corner. The dead man is not left alone even at night, and in the room where he lies, the light must always be on.

The deceased Veps used to be buried in white clothes without embroidery. It was believed that the bright embroidery on the shroud of the deceased would be the cause of his torment in the next world. At present, the deceased is dressed in clothes that older people usually prepare for themselves in advance.

Funerals are usually held on the third day after death. In the old days, the Veps had two types of funerals: “with lamentations” and “with the rejoicing of the dead”, when on the way to the cemetery they played musical instruments and sang songs that the deceased loved during his lifetime. A memorial service is held after the burial. A funeral dinner is also held on the third and fortieth day after death. 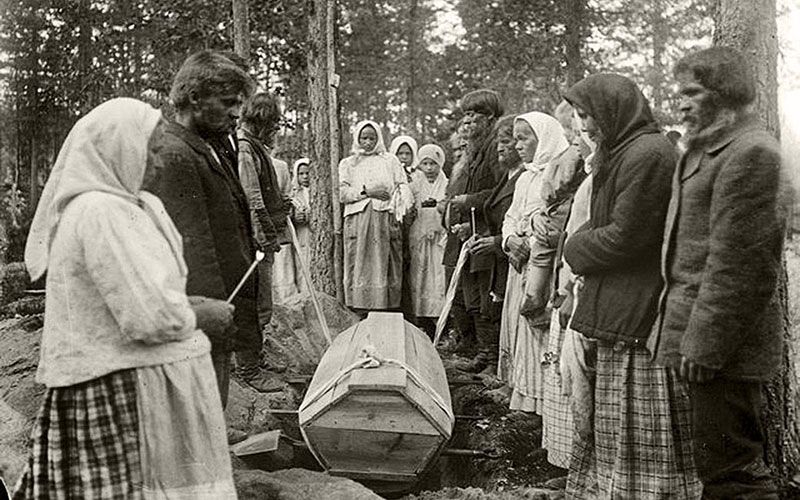 Unlike other peoples, the culinary traditions of the Vepsians can be described briefly, since there are no particularly exquisite dishes in it. The basis of the diet of the Vepsian people is flour products, vegetables and fish, meat was included in the diet mainly in the fall, during the period of slaughter.

From the first courses, the Veps usually cook sorrel or nettle soup, in which they put potatoes, pearl barley or barley groats, onions and dill. Served with sour cream and hard-boiled eggs. A festive dish is a hearty and very tasty peasant goulash soup, which is prepared from a large amount of meat with bones, potatoes, cereals and onions.

Popular meat dishes are roast meat with potatoes and Vepsian sausages. The roast is prepared according to the classic recipe, sausages are made by filling the small intestines with oatmeal (coarse flour from steamed and lightly fried barley or oat grains) and fried in a large amount of oil. 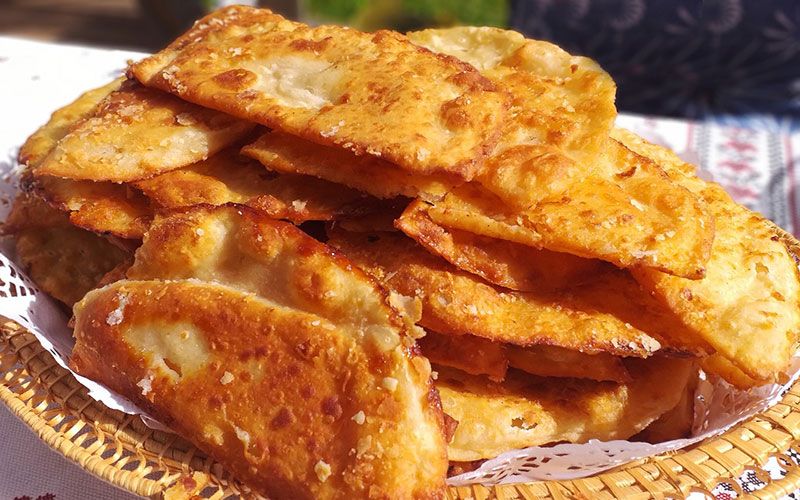