Uprising of the Decembrists, 1825

The death of Tsar Alexander I in November 1825 caught the conspirators by surprise, who for almost ten years had been plotting his overthrow and replacement of the Russian autocracy. Most of these people, while still young officers, participated in the War of 1812 and foreign campaigns that culminated in the fall of Paris. All of them were representatives of the ruling class in Russia, the landlord and feudal nobility.

They returned home under the strong influence of Western European political theories and institutions – constitutional monarchy, republicanism, parliamentary rule, etc. Their impressions and experiences became fertile soil for the seeds already sown among the enlightened nobles by the Russian humanists of the 18th century – Fonvizin, Radishchev. 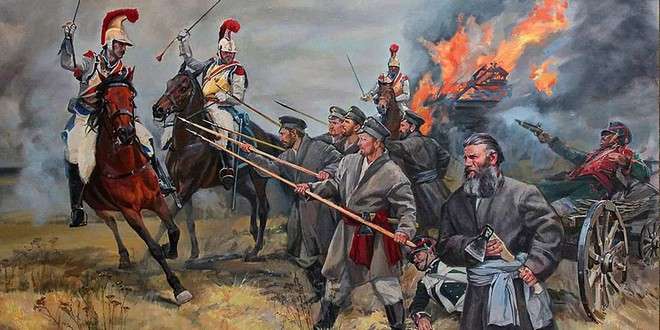 The defeat of Napoleon in Russia aroused a sense of pride and independence, at the same time a national and political upsurge, in the simplest strata of the people. They first discovered the measure of their strength, but found that their sacrifices for the good of the country did not give them the right to improve their sad situation.

Gradually, as a result of the activities of often secret literary circles, discussion societies, Masonic lodges and even dining clubs, a tangible movement of opposition to the policies of Alexander I arose. These movements eventually came to two secret political organizations. The Southern Society, which was founded among the officers of the Second Army by Pavel Pestel, and the Northern Society in St. Petersburg and Moscow, whose main force is the officers of the Guard.

The conspirators, of course, understood that they must have at least some significant military force under their command to attempt a coup d’etat. Their main calculation was made on the regiments of the Life Guards, of which the garrison of the capital consisted in peacetime. There was indeed fertile ground for unrest here. After the war, the control of the armed forces was actually in the hands of one person – Count Arakcheev, who was in charge of military colonies and a cruel enemy of all enlightenment and progress.

In 1820, the soldiers of the Semenovsky regiment (one of the two original guards regiments) raised an open mutiny caused by the cruelty of their commander, Colonel Schwartz, who, as a rule, spat in the face of any soldier who disliked him.

Agitation work was entrusted to members of the Northern Society, who were officers of the Guard. Bestuzhev and Ryleev composed seditious poems, deftly imitating soldiers’ folk songs and poems, which were distributed in handwritten copies and learned by heart in the barracks.

According to Russian law, the successor of Alexander I, who died without an heir, automatically became his brother, Tsarevich Konstantin, the commander-in-chief of the Polish army. But only members of the royal family knew that Constantine renounced the throne while Alexander was still alive.

For three weeks Russia was practically in a state of anarchy. And while the next in line to the throne, Grand Duke Nicholas, unsuccessfully tried to convince his brother to come to the capital and formally abdicate the throne, rumors began to spread throughout the city. Finally, Nicholas got his hands on evidence of an extensive conspiracy among army officers.

On the night of December 12, 1825, Nicholas convened the Council of State, announced Constantine’s renunciation of the throne and decided to become king.

The conspirators understood that their first goal should be to prevent the Senate from publishing the proclamation of the succession to the throne by Nicholas I. Therefore, the Decembrists decided to call their sympathetic regiments to force the senators to publish a revolutionary manifesto addressed to the Russian people in return. Senate Square was supposed to become the main place for the performance, then the Winter Palace should be occupied, the entire royal family should be arrested and the Peter and Paul Fortress should be captured.

The fate of the royal family has been the subject of much debate among the Decembrists. Some of which demanded its complete destruction. Despite a compromise between moderates and radicals, Ryleev privately called for the assassination of Nikolai during the seizure of the Winter Palace, and Kakhovsky, a former grenadier officer, promised to carry it out.

The Decembrists elected a leader who headed the military command of the rebel forces gathered on Senate Square, it was Prince Trubetskoy. The officers were sent to the regiments with the news of the usurpation of power by Nikolai, in order to withdraw the sympathetic detachments on the morning of December 14 to Senate Square. 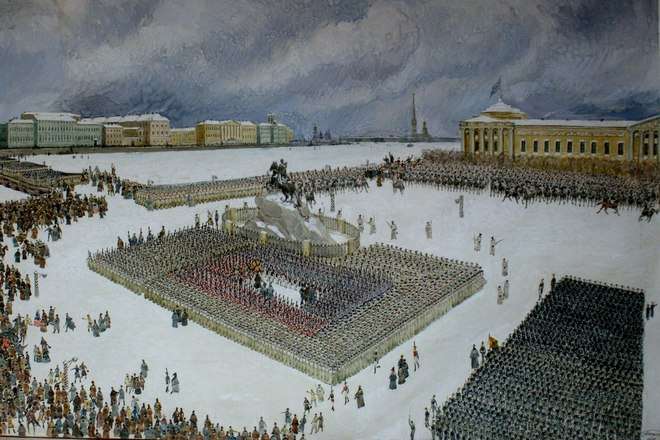 This was not the only major deviation from the original plan that already threatened the success of the uprising. Yakubovich, the Decembrist, who was supposed to lead the sailors of the guards naval crew to seize the Winter Palace and the royal family, refused this order and instead appeared on Senate Square. But worst of all was that by this time Trubetskoy had decided to betray the cause of the rebels.

The time, so important for the rebels, played against them, no troops arrived to reinforce, and all this time Nicholas acted, gradually blocking the approaches to the Square with troops loyal to him, horse and foot. So by 15:00, about 800 people opposed the rebels.

To Nikolai’s dismay, the crowd that had watched these military maneuvers with such interest suddenly took an active part in the case. When the Horse Guards attacked the rebels, they were met not only by the fire of the Moscow regiment, but also by a hail of stones and logs. A hail of these shells was also directed at Nikolai and his retinue. The Horse Guards retreated in disarray. 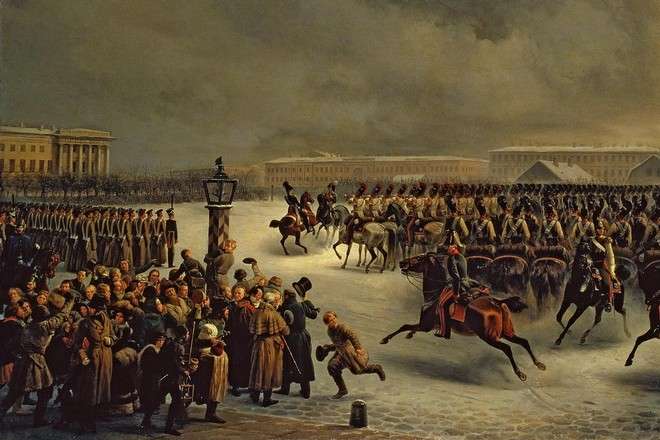 With the onset of darkness, Nikolai played his last card. He called in a large detachment of guards foot artillery with 32 guns. Four guns were located so as to shoot through the entire Senate Square, and at about 16:00 the order was given to open fire. Seven shots were fired, and by that time the forces of the Decembrists had been dispersed. There was no one left on Senate Square except the killed and wounded.

As soon as the rebels were broken, Nikolai began a sweep. Cavalry detachments moved across the capital, arresting fugitive soldiers, sailors and suspicious civilians. Detachments of the arrested rebels were taken back to Senate Square, from where a long column of prisoners marched towards the Peter and Paul Fortress.

The leading Decembrists met for the last time in Ryleev’s apartment, from where a messenger was sent to try to escape the capital and warn the southern conspirators of the failure in the North. Gradually, all the leaders of the rebels were captured, and the interrogation of the arrested officers during the night was carried out in the Hermitage by Nikolai himself. 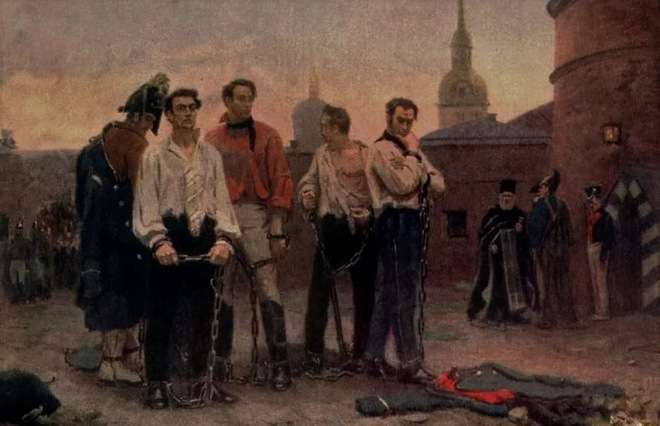 The accused were divided into several categories for punishment. Five of them – Pestel, Ryleev, Kakhovsky, Bestuzhev-Ryumin and Muravyev-Apostol (the last two are the leaders of the Southern Society) were sentenced to death and were hanged at dawn on July 13, 1826.

The Decembrist uprising was the first organized political uprising in Russia, distinct from such spontaneous mass movements as the Razin and Pugachev movements. It gave rise to a revolutionary era that lasted until the final overthrow of tsarism in 1917. Its failure, in the end, was due to the self-isolation of the Decembrists from the masses, they refused to call for popular action even in the last hours of despair on Senate Square, despite the fact that the crowd clearly showed their sympathy.

Their mistakes and their political naivety today seem ridiculous to anyone who is not familiar with the peculiar spirit of the nobleman. But they left behind a tradition of heroic self-sacrifice and noble patriotism, which, despite their official representation of them as regicides and criminals, made a deep impression on Russians of any class.

The heirs of the Decembrists were people of the nobility, writers who supported the almost dying flame of independent thought during the long years of apathy and fear that followed in 1825. But their main audience was commoners, “commoners” who then began to fill universities, from whose ranks the more capable leaders of the political and intellectual opposition grew.