Modern summer cottages are increasingly transforming from vegetable gardens into landscaped areas for a comfortable stay with the whole family. On the plots, flower beds, flower beds, alpine slides and rockeries, paths lined with paving slabs appear. Fountains or artificial reservoirs have become fashionable. Landscaping is becoming more and more popular and gives rise to new ideas that surprise with their originality. At the same time, especially creative individuals are not limited to the standard set – a house, a gazebo, a swing, a flower bed and continue to search for new solutions. By creating unusual summer cottages or whole architectural ensembles, sometimes the simplest summer residents manage to surprise professional designers. 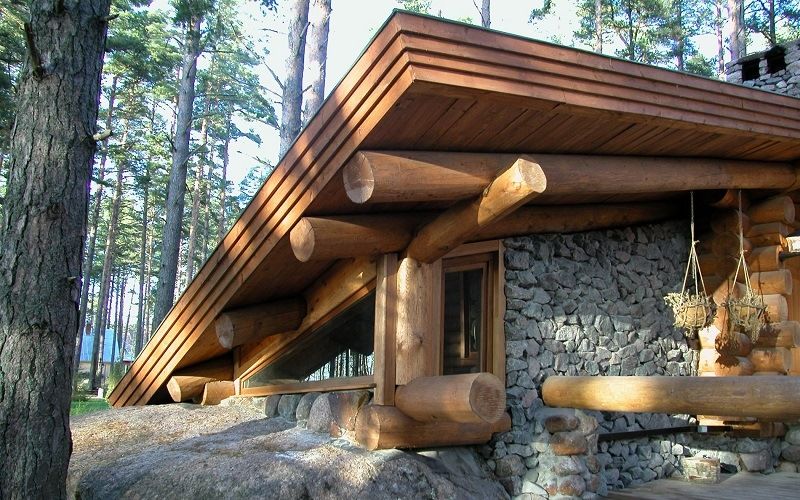 As a rule, to create something exclusive, it is enough to highlight an accent detail, structure or structure and harmoniously integrate it into the environment. A more difficult task is to combine unusualness and ergonomics so that the idea differs not only in appearance, but also in comfort, functionality, and efficiency. Professional designers, architects and structural engineers face such challenges every day, delighting customers with new research.

The project of the Polish architect Daniel Chapewski really amazed the public, and today it never ceases to amaze tourists. The country house stands right on the roof, and at its bottom, directed upward, you can see the remains of the foundation. 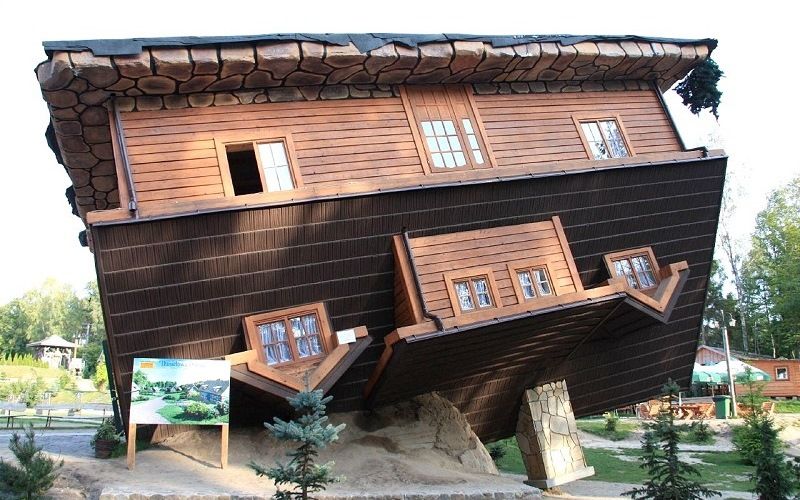 Of course, all structures are calculated, so the house is securely tied to the base, and scraps of the foundation are a specific decor. One gets the impression that a huge giant just tore the house out of the ground and put it upside down. The house is visited by whole lines of curious tourists, but hardly any of them would agree to live in such a dwelling. Rather, this project is an exaggerated form of challenge to routine and established stereotypes. Although it is worth noting that among the works of the architect there are no less unusual buildings, many of which embody the same idea – to turn everything upside down.

It is probably more accustomed to see round houses in science fiction films, but in reality a three-story building in the shape of a ball at first glance may seem like an alien aircraft. It is difficult to judge how comfortable such a house is for living or summer vacations. Just think, the walls are a little round inside, but the author certainly surprised the neighbors. 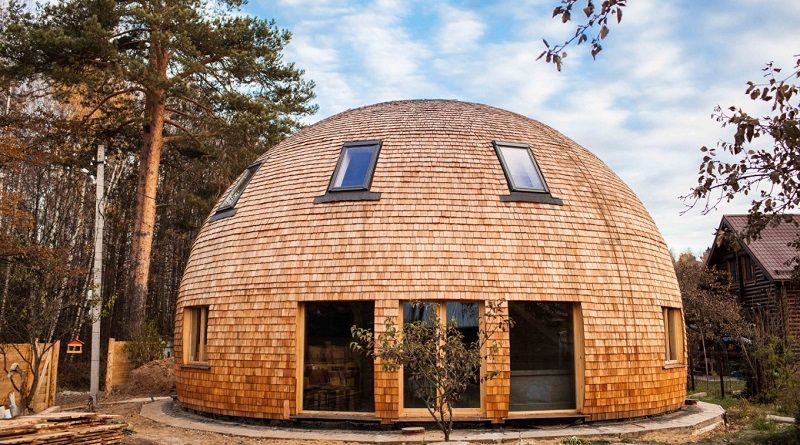 Another project has become a whole architectural complex, consisting of three spherical houses connected to each other. Despite the unusualness, the architectural design is not devoid of taste and perfectly harmonizes with the surrounding environment. Large semicircular window openings and rounded doors give the building a special charm of romanticism. A small artificial pond adjoining the rear window and a stylish straw canopy over one of the “balls” became a great addition to the house.

The author borrowed the idea from the Eskimos, whose traditional dwellings had a similar shape. At the same time, clay adobe blocks were used to implement the project. The interior is dominated by orange shades, which brings a special warmth, harmony and positive attitude to the house.

House in the chimney

The idea is not new, but quite popular, and, most importantly, simple and original. A reinforced concrete pipe with an inner diameter of a man’s height was used as a house. Usually such pipes are used for collectors, but in this case they found a completely new application. 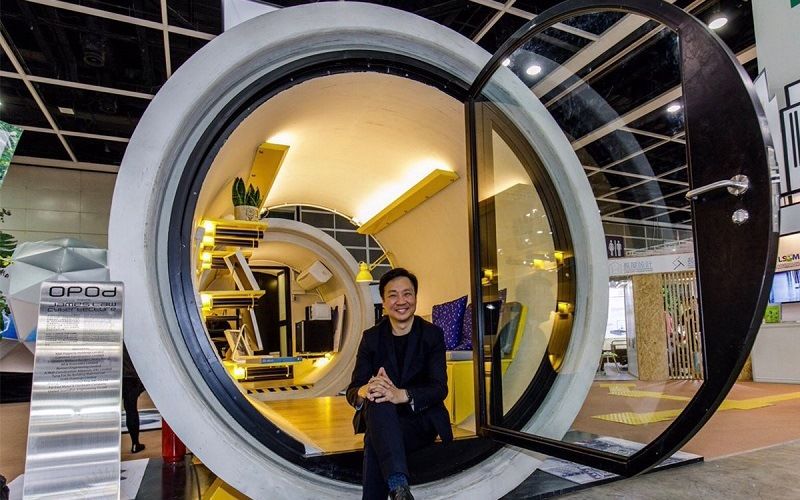 All that had to be done was to fix the pipe with blocks, insert a blank wall on one side, and install a round door on the other. For natural light, the author cut out a round window from the side. Inside such a house there is a double bed, one side of which has an extension as a bedside table.

The idea is suitable for fans of minimalism, nothing superfluous and there will never be a mess. By the way, the house does not have a foundation and is not tied to the land, therefore it is not considered capital construction and you will not have to pay tax on it either.

An unusual and rather practical decoration of the cottage was the building inside the hill. The house resembles the mink of a fabulous rabbit. The hill is completely covered with vegetation – ground cover plants, ferns and rare bushes. The oval-shaped wooden door fits perfectly into the composition, and a couple of large boulders that have grown into the hill near the door complement the fairytale plot of the unusual building. 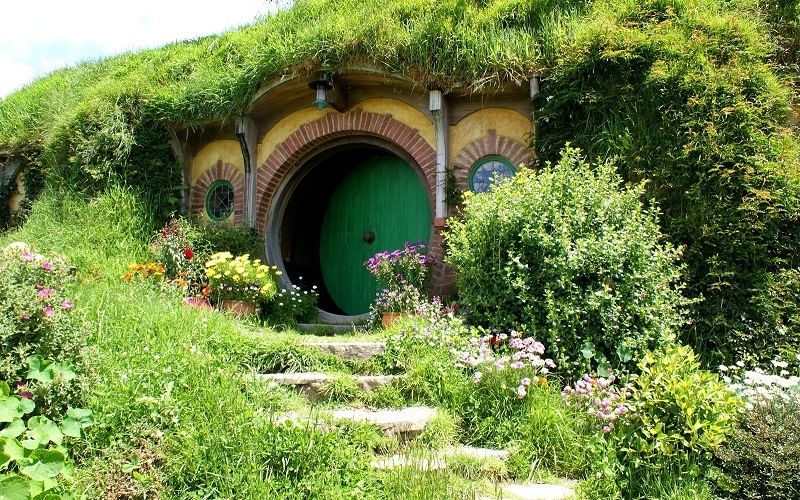 Such a house is perfectly protected from heat, sun and can serve as an outbuilding for storing vegetables. The structure can also be a favorite playground for children. If you provide some engineering equipment in the equipment of the dugout that can maintain the internal microclimate, then you will get an excellent place for unity with nature for the duration of your vacation.

Unusual fences for a summer residence

Not only the extraordinary architecture of the house or the landscape design can make the cottage unusual. After all, the first thing that guests or neighbors see is a fence. It is the fence that can become an important detail of the entire architectural ensemble on the land.

The author, apparently, is tired of the fact that an ordinary fence made of corrugated board with an open frame from the inside gives the impression of being limited. As a result, the idea came up to make a fence in the form of a whatnot, so that from the inside it looked not like a fence, but like garden furniture that is popular today. 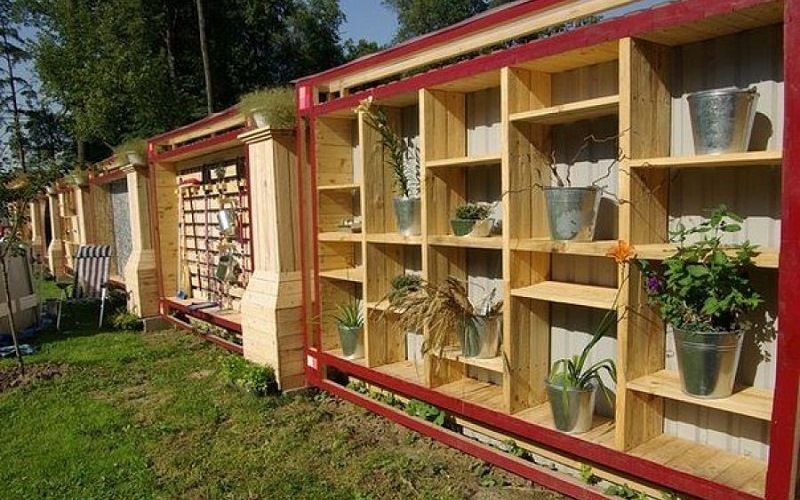 The idea was a success. Wooden partitions were attached to the supports, and shelves were fixed between them. A canopy structure was installed on top and the fence turned into a whatnot. As a decor, the most ordinary galvanized buckets were placed on the shelves and flowers were planted in them. Outside, of course, the fence looks quite ordinary, but once you enter the site, you find yourself in a completely different world.

The idea to make such a fence most likely came to the owner of the dacha when he looked at the firewood stacked against the wall. As a result, the fence consists of logs of the same length, but different in thickness, stacked in several rows. As a foundation, so that the wood does not pull moisture from the ground, stones are used, laid in one row. 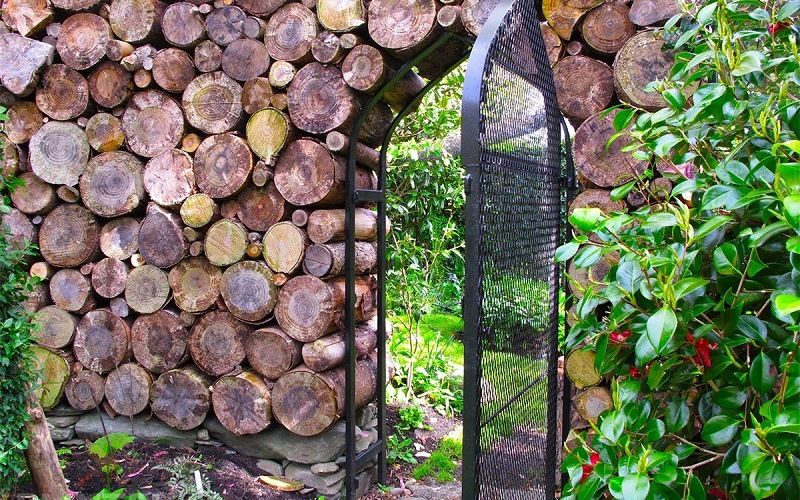 A rather stylish and reliable wicket has become an interesting detail of the fence. An arched opening in the wall made of logs is reinforced with a frame made of shaped pipes. The wicket itself is a frame made of corners of the same shape, sewn up with a lattice made of expanded metal.

Such a fence is fully consistent with eco-style and is emphasized by green plantings of lemongrass, as well as other ornamental plants along the fence. Not only the unusual idea attracts attention, but also the warmth of natural wood with uncoated tree cuts.

It’s good when you live in a big country where there is enough land for everyone. But what should the residents of small states do, because you can’t find enough dachas at all. Resourceful Europeans found a way out and began to build floating houses. Houses on the water are especially popular in the Netherlands and Great Britain, where you can even find 3-story floating mansions. The problem with these houses is the lack of a separate communal infrastructure. For obvious reasons, it is impossible to connect them to the water supply and sewerage system.

In Germany, this problem was solved at once by 3 universities. The result of their work was a fully autonomous 2-story floating house. The uniqueness of the house is least of all in the ability to swim; rather, the structure has become an outstanding product of innovative solutions in the field of architecture and engineering. 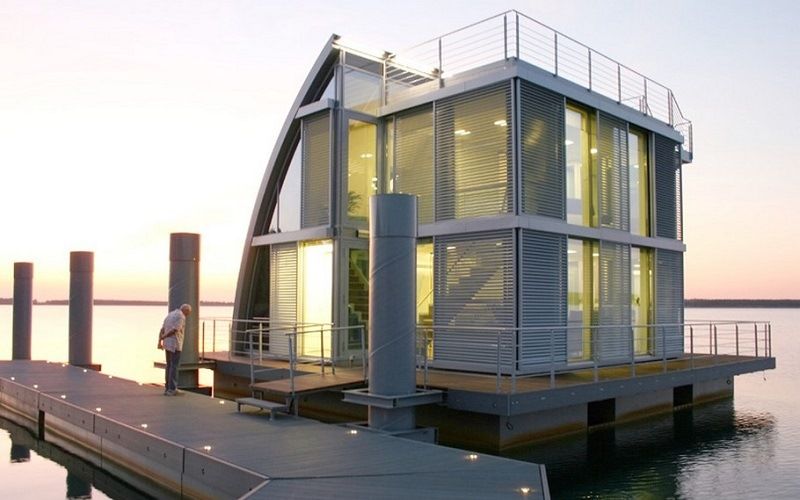 The house is literally packed with the latest technology. Solar panels, lithium-ion batteries, bioaccumulative drainage systems, as well as heating and cooling systems in the hot season, unparalleled and specially designed for this project. The house has a fireplace with special salt heat accumulators capable of storing heat from the fire and heating the house for a long time. An adiabatic cooling system does not require an electrical connection at all and works on the principle of transferring heat to water.

The architecture of the building also does not leave you indifferent. The house has solid glazing on three sides, and a spacious terrace will allow you to spend an evening outdoors, enjoying the landscape of Lake Geierwalde, where the first prototype was launched.

In Russia, there is no special need for houseboats, but the attraction to exoticism gives rise to unusual ideas both among ordinary summer residents and professional developers. It is possible to supplement the dacha with a light floating structure if it is located on the shore of the reservoir. This idea is often implemented by summer residents in structures made from scrap materials. Usually, empty barrels or even plastic bottles are used instead of pontoons, and the superstructure itself is made of boards and plywood.

The modern modular architecture has allowed the development of the original idea, making it a reality. The first experimental floating module “DD16” was launched in the suburbs. 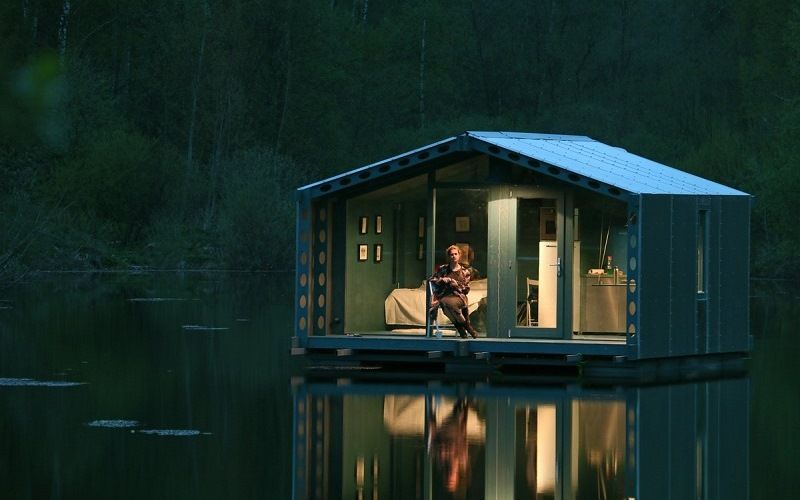 The creators of the novelty were the BIO-architects company, offering to test an interesting structure equipped with everything necessary for a comfortable pastime and even for permanent residence. The house is powered by solar panels, has a dry closet and shower. The filter system allows drinking and cooking water directly from the reservoir. Despite its diminutive size, the 16 m² house contains a room with a double bed and a kitchen, and a large panoramic window opens onto the terrace.

Today, a single copy is rented, and further development is carried out taking into account user feedback. Perhaps in the near future there will be such a thing as a floating dacha, because there are many rivers and lakes in our country. Only instead of tax on land and building, you will have to pay for mooring. For the rest, no beds, Colorado beetles, weeds, but only sun, air, water and good rest.