Interior design has become an important part of the architecture of residential and public buildings, creating a special environment that is distinguished by personality or reflecting the style and nature of the purpose of the room. There are many styles in modern room decoration. At the same time, an unusual interior that goes beyond the generally accepted stereotypes can become the beginning of a new direction, and the most daring decisions do not always lend themselves to ordinary perception. 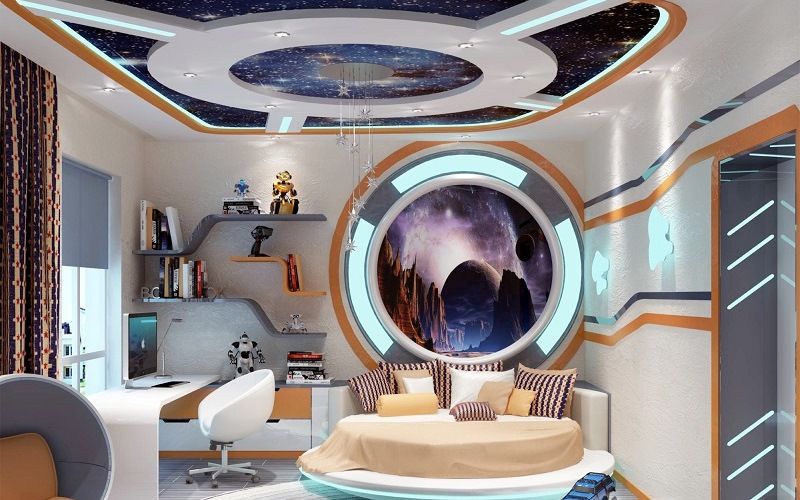 Not so long ago, the interior was associated with the comfort and warmth of the hearth, so hardly anyone could imagine a living room with unplastered brick walls. Decorating with rough boards or slab furniture also did not fit in the head, and the iron barrel in the hall as a fireplace generally broke the framework of understanding. Today this style is called “loft” and is very popular. This is not the limit, because someone follows fashion, and someone dictates, creates and creates.

The object is located in the city of Volzhsky and is a prominent representative of the loft. When decorating the interior, the designers tried to preserve the spirit of the history of the room as much as possible, because the industrial building of the mid-20th century was taken as the basis. The very purpose of the object brought functionality to the fore, so the installation of special engineering equipment was included in the architectural plan.

The old building had a frame-panel structure with brick partitions without cladding. Inside the room there are columns on which the reinforced concrete rafter beams rest, and the vaulted ceiling exposes the back of the roof slabs. 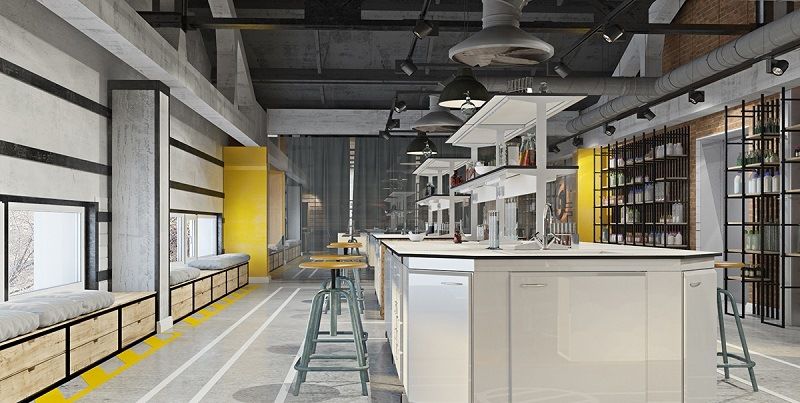 As a result, everything was preserved, restored and, moreover, emphasized the beauty of the materials. Panoramic windows were installed on the sides of the building. Brick and concrete walls were left as they were, and the partition along the room was faced with natural wooden boards. The ceiling was also not closed, so all the engineering equipment was in plain sight, giving the interior a special entourage.

Lighting was of great importance. The laboratory used 5 types of lamps, 4 of which had a suspended structure. Special laboratory tables were illuminated with directional strip lights, and large metal shades were provided for the aisles. In the conference room, above the conference table, 3 LED lamps were hung in the form of large steel-colored hoops with an internal luminous tape.

An interestingly designed brick wall, on which pipes were placed as a thematic decor, creating a composition of vertical and horizontal sections with turns and branches. Edison lamps were installed at the end of each pipe. The theme of the room is also emphasized on the side wall of the conference room. Here the highlight of the decor is the transparent periodic table. Natural vegetation brings a touch of revitalization, and if the columns are open in the working part of the laboratory, then in the hall they are hidden by the abundant foliage of natural climbing plants. 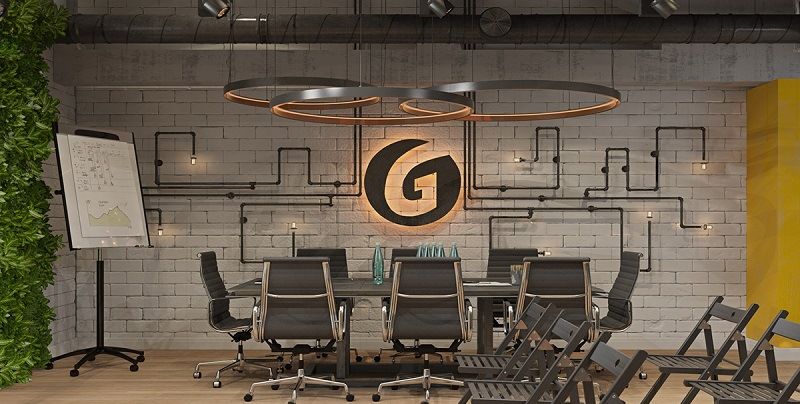 Based on the requirements for lighting industrial facilities, it was decided to decorate the premises in light gray tones, while laboratory tables and shelves were chosen in white. This color uniformity was diluted with a touch of futurism and every other column was painted bright yellow. In addition, on the restored self-leveling floors, work areas were highlighted with white and yellow stripes.

The peak of fashion for ecological style came in 2015 and was first expressed in the use of natural materials – wood, stone, glass, metal, leather. In the future, eco in the interior acquired a broader concept – the use of not only natural materials, but also any others, whose production and disposal does not harm the environment. Today, such decoration of the room has been divided into several styles and can have any direction from classic to sci-fi, with the exception of accent details of the interior.

Real tree trunk in the room

The solution is really unusual and is only suitable for large and spacious rooms. The impression is that the tree trunk grows from the floor, and its crown goes into the ceiling. This design is complemented by natural stumps as chairs, slab tables and shelves, and unusual decor in the form of real driftwood. 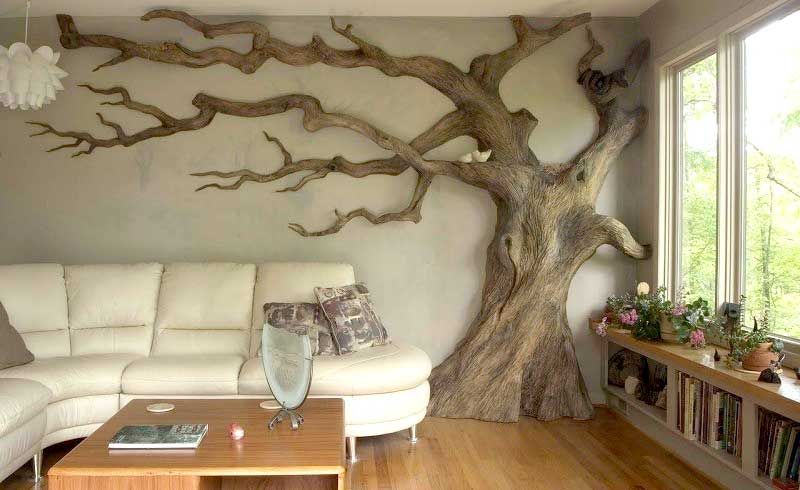 It would seem that such an insignificant interior detail like a skirting board is unlikely to affect the overall atmosphere, but creative designers managed to change it beyond recognition. Now it is not even a plinth, but something like an internal blind area. In this version, the floor covering does not reach the wall by 25-30 cm, and the remaining space has a depression and is filled with rounded pebbles. You can choose stones of any natural color or, alternating them, lay out patterns, changing the formats as desired. 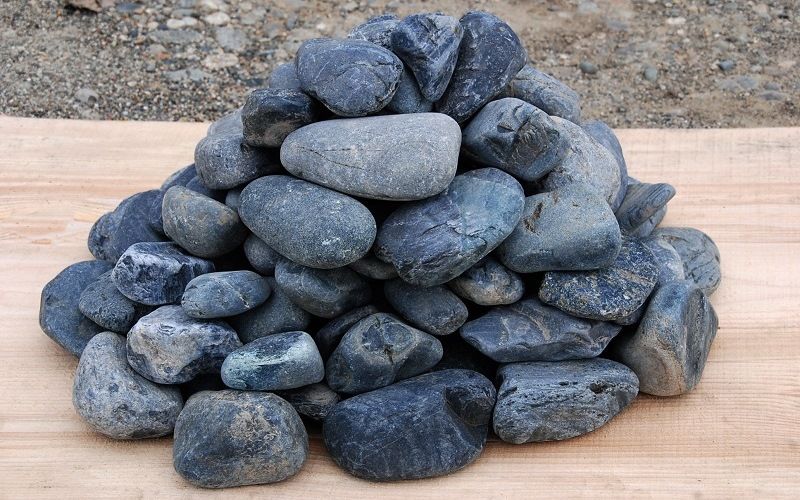 All the unusualness of such an interior detail lies in the habit, because the plants should grow in flowerpots on the windowsill, but here they grow right on the walls. The green wall is made up of multi-tiered flowerpots, trays, in which several types of plants can be planted. With a skillful selection of the composition, the result is amazing. The wall turns out to be not just green, but also blooms. Moreover, if you plant plants that bloom at different times and in different colors, then the composition will change, excluding the uniformity of color and shape.

The only difficulty of such a solution is the need to take care of flowers, as well as the creation of the necessary lighting, microclimate and humidity in the room. 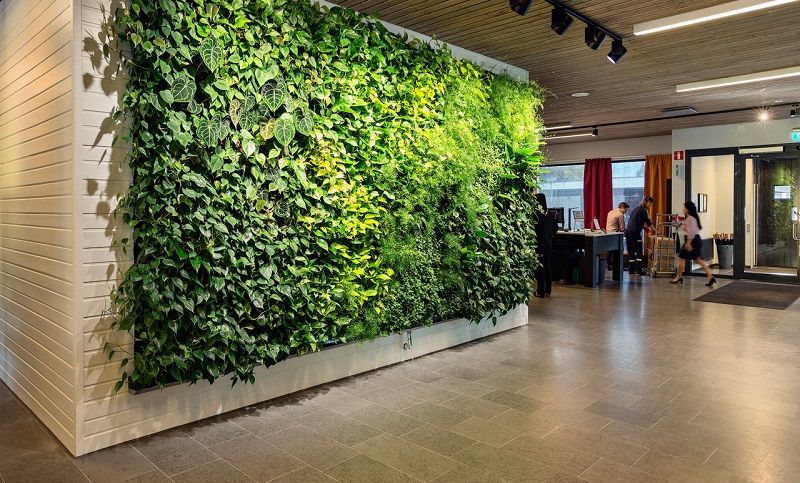 Since we are talking about eco-style, it is worth highlighting its most pronounced appearance – grunge. It was this style that remained true to the original principles of the ecological direction. Here, not only the origin of the material is important, but also the texture, texture, color. One of the features of grunge is brutalism, emphasizing the simplicity of the material, the lack of processing, because everything should look as natural and natural as possible. Everything that distinguishes the grunge-style room from the ancient monk’s cell is spaciousness and light.

One of the interpretations of this trend in the interior is more reminiscent of a new building without internal work or “melts the brains” with the contradictoriness of the community of respectability and extreme simplicity. So, if there is not enough money for repairs, then this option is worth considering. 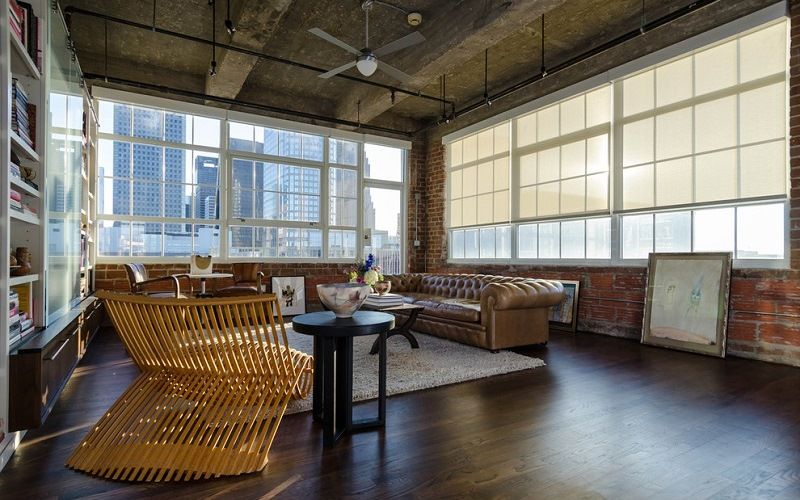 A high and spacious room looks, to put it mildly, extravagant. On the walls, not only is there no cladding, but in places there are remains of the plaster layer. The view opens the stone from which the wall is laid. The stones are different in thickness, so there is no clarity of the masonry rows. The second wall is made of blocks and has rough seams. Steel corners were used as a lintel, which, apparently from time to time, were covered with rust. The ceiling is made of load-bearing corrugated board. The floor is probably made of wood-composite panels, as it flakes off with a flat surface, and there is a seam in the middle. There is no door to the room, there is only a doorway and a rough wooden frame. On the wall, as a decoration, there is a wooden head of an animal, shaped like a cow, and along the horns – a horned goat.

Now comes the fun part. There is a white, high pile carpet in the center of the room. It has a semicircular leather sofa, a round coffee table and two leather armchairs. On the left is a floor lamp, and on the right is a bedside table with rounded walls, a clearly visible texture of wood and a glass top. There is a stylish lamp with a mirrored metal body and a snow-white floor lamp on the nightstand. Quite a tough contrast, isn’t it?

From a technical point of view, living in such an environment is difficult, because the walls in this state will become a source of dust, and the carpet will become a dust collector. That is why today it is difficult to find an interior in a specific style without third-party elements. Most often, the most practical options are mixed style directions with a predominance of the main and harmoniously selected details.

Probably, the author wanted to designate merciless grunge in the strict framework of the canons, going to extremes, and used an abandoned room for work. This option is more suitable for a theme party or a romantic date.

This is not even a style, but rather an action for the environment. The idea belongs to the German artist G. Schult – to build a hotel out of rubbish to protest the pollution of the World Ocean. 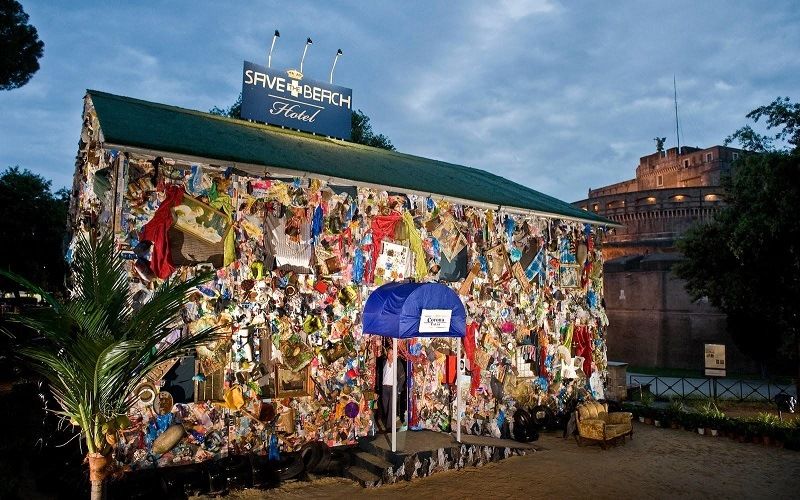 This hotel was built in 2011 in Madrid. The construction of the five-room building took 12 tons of garbage collected from beaches, landfills and markets by activists. Outside and inside, the walls are not tiled, so garbage is visible on both sides. This is how the interior turned out – just pressed rubbish. Particularly courageous tourists who share the views of activists can spend the night at the hotel on beds brought from landfills surrounded by garbage walls.

British designer T. Price suddenly realized that a simple plastic water pipe can become clay in the hands of a creator. As a result, the master created a whole cherry grove of pipes and screeds. 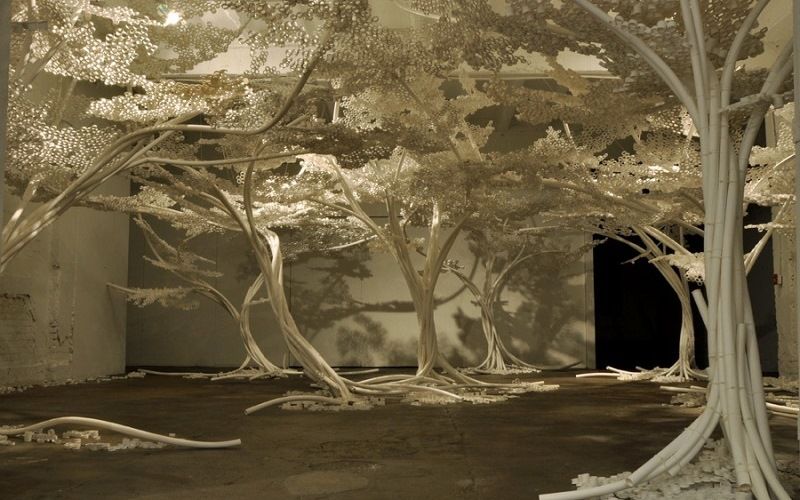 The trunks of trees are formed from intertwined pipes, and then diverge to the crown. An array of foliage is formed by soldered rings, all cut from the same pipes. The Cherry Orchard has graced an entire room at the Museum of Industry in Washington. The large tree also became the accent of the interior of the conference room of one of the American companies. A sweeping cherry stands in the center of the room, and a ring-shaped table is located around its trunk.

The style has appeared recently, but has already become the most popular among leading architects. The style was integrated from architecture into interior design later, becoming the most daring and high-tech. The main characteristic of the style is form, regardless of the material. 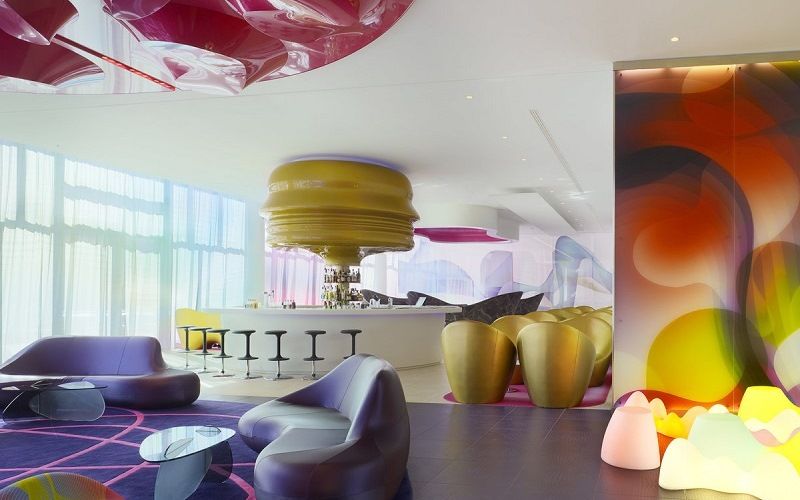 A blob is like water frozen in a stream, from here comes the smoothness of forms, waves, bends without sharp corners and protrusions. Naturally, not any finishing material can take such forms, so only high-tech composites will allow you to decorate a room in a real blob. In the decoration of walls and ceilings, liquid stones, polyurethane foam, plastics are used, and the forms take intricate curves.

In the near future, interiors that are unusual for today will become very commonplace, and technologists and design masters will surprise with even more interactive solutions. By the way, some experimental samples already exist and, perhaps, the room, on a voice command, will be able to turn into a seaside with a real breeze or a pine forest with the smell of needles.