All dinosaurs are unusual in their own way, because for modern man these animals are a complete exotic and a wonder. But among them there are absolutely breathtaking specimens that amaze the imagination with their size, cruelty or fury, and sometimes cause an involuntary smile on the face. It is about such creatures that will be discussed below.

This unusual animal existed about 76 million years ago. Parasaurolophus belonged to the order of duck-billed dinosaurs, which were named so for their characteristic appearance. An outstanding feature of this creature that distinguishes it from all other relatives is the modified nasal bones of the skull, which have turned into long hollow tubes, bending far behind the head. The trumpet-shaped scallop made the parasaurolophus’s face fearless and even funny, which was quite true, considering the exclusively plant-based diet of the huge “vegetarian”.

During exhalation, the animal could close the nasal passages with special bridges and pass air through hollow bone outgrowths. At the same time, a loud trumpet sound sounded, reminiscent of the sound of large wind instruments. Paleontologists suggest that through such unusual “songs” parasaurolophids could communicate with each other, transmitting signals of danger, challenge each other to a duel or attract partners during the mating season with “serenades”. Judging by the anatomy of this chordate, air circulation inside the tubular nasal bones could serve as a kind of “air conditioner”, cooling the overheated brain of the giant in the heat. In addition, the ridge protected the head from blows from branches while running in the middle of a dense forest.

This dinosaur holds the title of the largest carnivorous creature that has ever existed on the planet. The weight of the reptile reached almost 20 tons in adulthood. Only the outgrowths on the back, forming a kind of crest, rose a couple of meters. It is for the presence of such a crest that this terrible monster got its name, which translates as “vertebrate lizard”. This dorsal appendage had several functions: it served as a cooling chamber for the spinal cord, frightened opponents and was the main decoration of a male looking for a mate for procreation.

Scientists are sure that the body of a spinosaurus is the ideal body of a killer predator. While most dinosaurs of that period had curved teeth, in the spinosaurus they resembled sharp, even knives, allowing you to catch even the most slippery and nimble prey. After the victim got in the teeth, the monster began to sharply turn its head from side to side, releasing life from the captured animal in a few seconds. The victims who fell into this mouth did not have the slightest chance of salvation.

Spinosaurus was engaged in foraging not only on land, it attacked fish in deep-water rivers and on the coast of the seas, therefore, both aquatic inhabitants and terrestrial creatures suffered from the enormous predator’s irrepressible appetite.

For the first time, the hypothesis that birds evolved from dinosaurs was voiced aggressively at one time. But many years later, more weighty arguments were found in the form of the skeleton of an epidexipteryx, which was initially mistaken for the remains of a feathered one. A detailed study baffled paleontologists, since this animal had all the signs of dinosaurs, but, at the same time, it had plumage. An unusual dinosaur-short, close in size to a modern pigeon, by weight reached only 160 g. The name “Epidexipteryx” is translated as “showing feathers”.

Having carefully studied the structure of the remains, paleontologists came to the conclusion that the epidexipteryx could not fly; most likely, the feathers performed the function of protecting the skin from cold and heat. The plumage was unevenly concentrated on different parts of the body and had a pronounced bright color, which made the animal noticeable in the era of faded green, brown and gray fauna. Four unusual tail feathers stood out, which are very different in structure from modern ones, since they consist of threadlike formations without a central axial shaft. The functions of such a tail consisted in coordinating movements while moving along the branches and attracting the opposite sex, avid for bright plumage.

If the previous representative of the dinosaurs, upon discovery, could be mistaken for a bird, then this one would quite pass for an insect. It is really difficult to imagine that a dinosaur fossil could be 50 mm long. On the back of the Longisquama there are unusual appendages, reminiscent of the shape of a hockey stick. Their length reaches 12 cm, which exceeds the length of the whole body. These dorsal appendages are formed by modified scales that cover the back.

The unusual education and its purpose has caused a lot of controversy among professionals. Over the years, a version was developed that the outgrowths were needed for this creature to carry out passive flight. Jumping from a hill or tree, Longisquams could slowly glide down, while the predator hunting them remained hungry in the same place. Perhaps, thanks to such a device, miniature “parachutists” were able to live on Earth for about 11 million years. Despite their tiny size, Longiskwams were predators, eating smaller insects, which they found in abundance on the tops of trees, where they lived most of their lives.

The unusual appearance of this animal compels directors and producers to make the pteranodon the protagonist of many feature films or documentaries about the prehistoric period and the era of dinosaurs. These animals actually look spectacular, but, unlike the aggressive cinematic image, the pteranodon was an exceptionally peaceful and harmless creature that ate only the fish it caught. In its beak there were not even the rudiments of teeth, so the winged creature simply swallowed unchewed food, which was smoothly digested in the stomach for many hours.

The wingspan of the pteranodon reached 7 meters, and scientists assume that the flight speed with such parameters was impressive. He had to eat well to provide himself with the energy he needed to fly. It is not known whether this creature would be completely safe for people, since scientists note the great force of the wings and the high power of the beak, with which the pteranodon could easily break even a thick sea shell. It is likely that when faced with a potentially dangerous person, the animal could be the first to go on the offensive and kill the enemy with one blow.

The animal that was the first to appreciate all the delights of life in the trees, where predators and enemies cannot get through – Epidendrosaurus. Something about it resembles birds, but the unusual forelimbs are more like pincers. Such an unusual shape appeared for a reason: the third finger lengthened over many centuries until it became comfortable enough to quickly and easily get larvae and small insects from the deepest and thinnest crevices in the bark of trees. 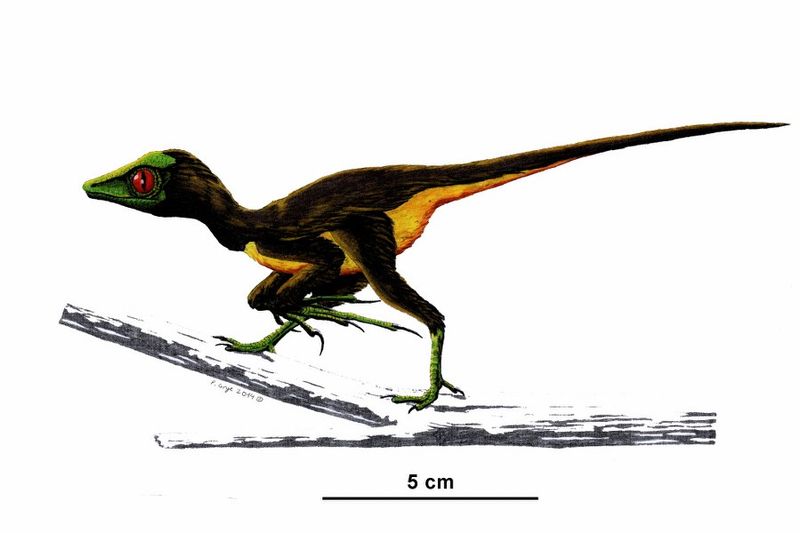 This representative of the prehistoric fauna lived about 160 million years ago, its remains were found in China in 2002. Now scientists cannot give a definite answer whether the bones found belonged to a cub or an adult. Perhaps the following findings will shed light on this. But so far it is unambiguously clear that the Epidendrosaurus became an important step on the way of the very first birds on earth.

Stegosaurus is one of the most recognizable dinosaurs thanks to its memorable appearance: on its back and tail are characteristic plates that make up a huge crest. With such outstanding parameters, he was forced to constantly eat in order to provide a huge body with nutrients. Its length reached 9 meters, and the food consisted exclusively of grass, so the calorie supply had to be replenished constantly. For this reason, the main and invariable occupation of the stegosaurus was the search and grinding of grass.

But something else is unusual in him. With such impressive parameters, the brain of this herbivore weighed only 70 g, which was 0.002% of the total weight. If we compare this parameter with a human, then in humans it is 940 times more. Because of this, the stegosaurus has earned the title of the stupidest dinosaur. Apparently, in the Jurassic period, the mind was not a very popular quality, since the stegosaurus was able to successfully exist for 10 million years, and at the same time lived and reproduced well.

Unlike his stupid brother, Troodon has won the title of the smartest dinosaur. An unusual creature grew up to average human parameters – 1.5-2 meters, and just as deftly skillfully move on its hind legs. Paleontologists believe that troodons developed a very high speed while running, in which a person would be far behind them. Based on the skull, the brain size is comparable to that of modern primates, which was absolutely incredible in the Jurassic period. 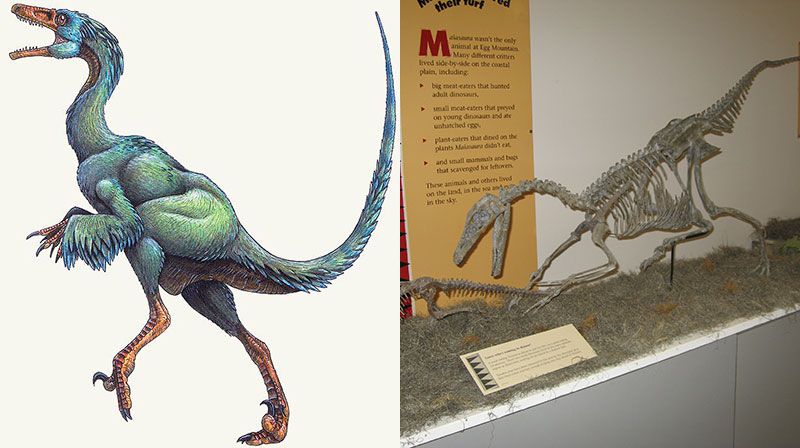 Despite the rather modest size for that time, these animals were dexterous hunters, since they had many things that are important in the process of hunting: quick wits, excellent eyesight and long tenacious fingers on the front legs. After the prey was reached, the predator lifted it up and threw it with force against a stone.

The level of intelligence of the Troodons allowed them to hunt in packs, driving the prey from one group to another. At the same time, they developed a peculiar way of communication, vaguely resembling the rudiments of speech. In addition, these intelligent animals were able to use hunting tools, which also testifies to high intelligence. Scientists believe that if evolution had not led to the extinction of the dinosaurs, the troodons could have evolved to the level of modern humans and even surpass them. That is why Troodons are considered the smartest dinosaur in existence.

At the moment, the tallest animal on earth is the giraffe: its height reaches 6 meters. Sauroposeidon could look at this “short man” with disdain, as his height was three times that. A real giant weighed 60 tons, and the body length from head to tail was 30 meters. To feed himself, he had to eat a ton of grass and leaves daily, so he chewed all the time throughout his life, which lasted about a hundred years, interrupting only for sleep and reproduction. Nature did not provide any defense mechanisms from enemies, compensating for everything with growth. 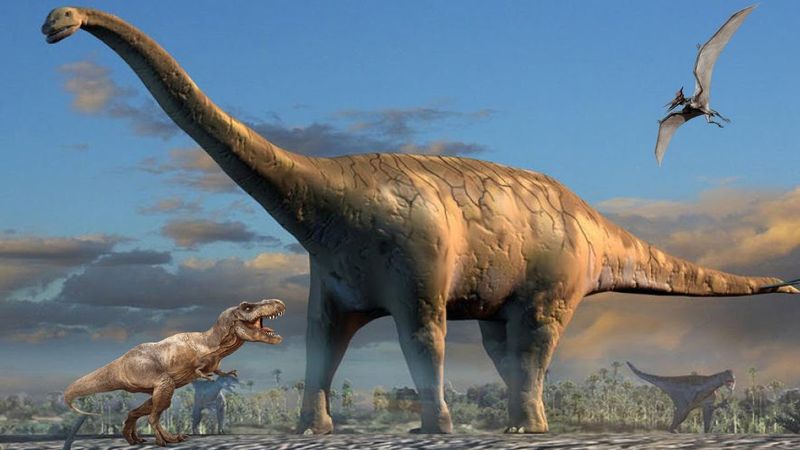 It was more difficult for the cubs, since they did not have a size advantage. In one clutch of the female, there were about a hundred eggs, but only 3-4 of the hatched cubs survived to the adult state. Parenting was not included in the list of virtues of sauroposeidons, so the cubs grew up on their own, trying to survive and protect themselves from daily dangers, and upon reaching puberty they were taken into the herd.

This is an unusual and very beautiful animal that looks like a real mod among creepy and often unsightly creatures. The horned collar around the head, crowned with six symmetrical large spikes, gives charm to the appearance. Styracosaurus was a herbivore, but his life did not pass peacefully and resignedly from this. During a fight or fight with a predator, the collar spines could break off, and this was a significant loss, since the long and sharp outgrowths attracted females. In addition, the larger and more beautiful the collar, the higher the position of the animal in the herd.

The styracosaurus had a huge horn on its nose, which makes this creature look like a rhino. Not only the horn, but also the parameters of the body are somewhat reminiscent of this contemporary. The bone horn grew up to 60 cm in length and reached a diameter of 15 cm. It came in handy when larger predators attacked the peace-loving and calm Styracosaurus.