Unable to find a place to live, a Pakistani man settled in a tree house

For many people, a tree house is associated with children’s games, but Farman Ali has been living in such an unusual dwelling for 8 years now. 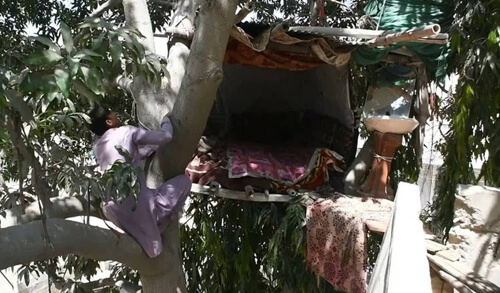 The man, whom many call Tarzan from Karachi (Pakistan), said that he is not leading such a life out of eccentricity and not of his own free will. Having lost both his parents, Farman had reached such a poverty line that he could not afford housing. Relatives and acquaintances refused to help the impoverished man, and he realized that the only shelter from which no one would drive him away was a dwelling on a tree growing in a public urban area and, in fact, owned by no one. The 28-year-old man does not sit idly by and works, washing cars, cleaning other people’s houses and buying groceries. But most of the clients pay him not with money, but with food and drinking water, so Farman does not even dream of getting a normal house in the near future.

Living in a tree, the man tried to make his hut, built from bamboo, wood, old doors and fabric, as comfortable as possible. There is a washbasin, a small stove, a battery-powered lamp and a phone charger. Farman said that he repeatedly turned to the authorities for help, but all his requests were ignored. At the moment, a man relies and hopes only for the mercy of Allah.

Bigfoot temporarily settled in the house for sale