At one time, the appearance of trains was a real revolution not only in the transport business, but in general in the life of mankind. Today they are more than a usual form of transport, as about 1.3 billion people of the planet use them every year. Throughout the history of its existence, a lot of interesting facts about trains have accumulated, some of which are presented in this collection.

At the end of August 1830, the American Peter Cooper organized (USA) a competition between the horse-drawn train and a steam locomotive of his own invention called Tom Thumb (translated as “Thumb Boy”), which the latter lost. They decided to hold a demonstration race on the section of the road between the towns of Rileys Tavern and Baltimore. 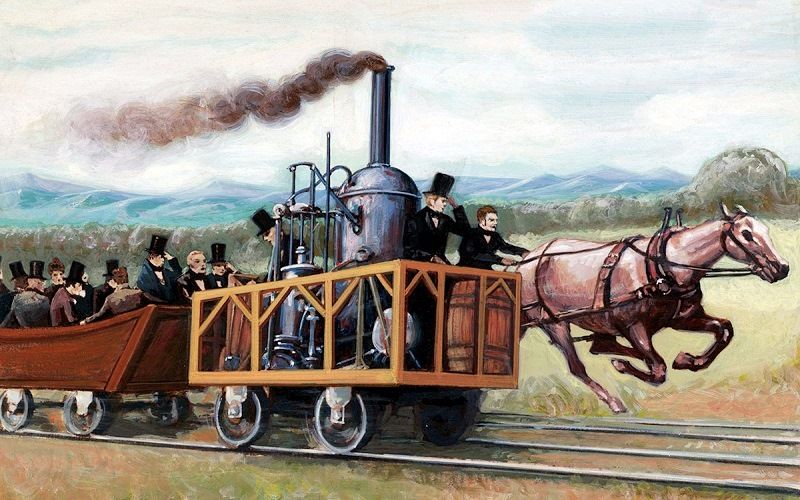 At the beginning of the test, the locomotive easily overtook the horse and accelerated to 29 km / h, but malfunctions in the boiler and a break in the drive belt caused the defeat: the horse reached the finish line first. Despite this failure, people were impressed by the power of the steam locomotive and in the near future trains with steam locomotives replaced horse-drawn carriages.

The emergence of time zones

Not everyone knows such an interesting fact that it is the trains that people owe the appearance of time zones. Until the 19th century. such a phenomenon as division into time zones was absent in principle. Due to the lack of high-speed transport, there was simply no such need. To determine the time in each region, they were guided by the sun. The ubiquity of rail service in the UK has prompted companies to unify times in order to schedule and avoid collisions on routes. 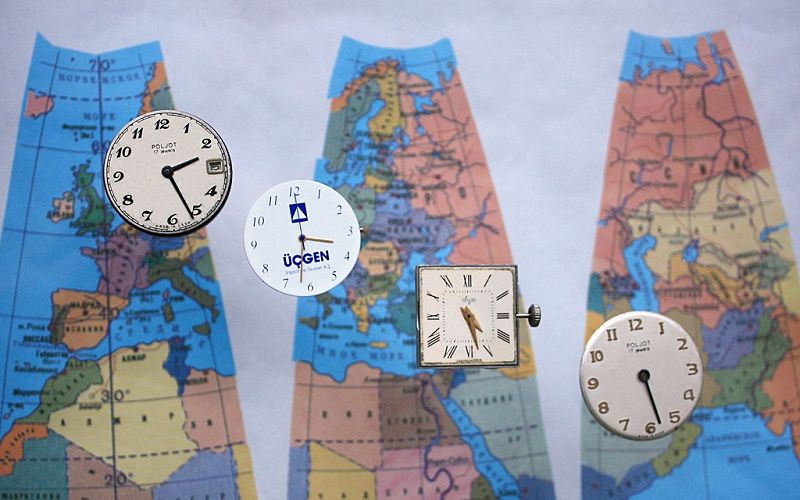 It was on the initiative of the railway workers that the decision was made on a single time zone for Greenwich, which should operate throughout the country. The transition was officially approved on December 1, 1847.

Over time, the time zone system began to be used in the United States and Canada, and then it spread throughout the world.

In October 1913, an incredible event happened in the US state of Ohio – a train collided with a steamboat. In the lake of the same name, the water level rose, which flooded the railroad tracks by almost 1 m. But the driver decided to continue driving even in such extreme conditions, he only used a steam locomotive with a high firebox for this purpose. 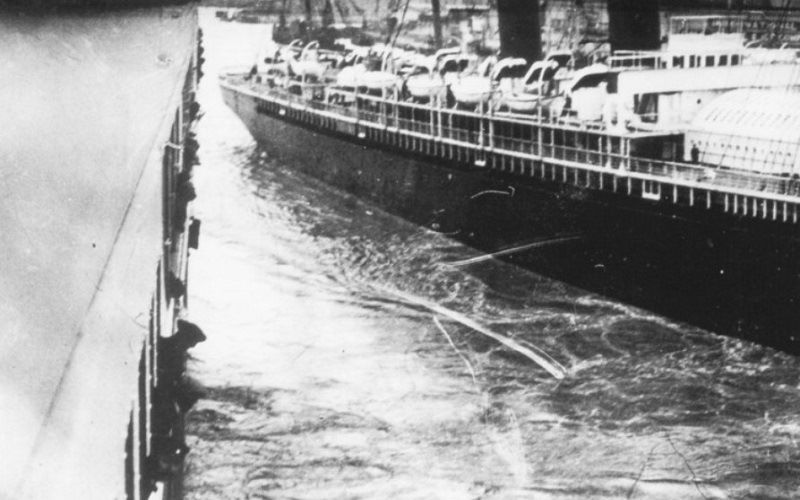 Approximately in the middle of the flooded road, the bow of a steamer of the lake company, which was moving along the lake at normal speed, crashed into the train. True, it remains a mystery why the ship sailed through the section, which is designated as land on all maps. Due to the fact that the train was rather slow, this incident was without casualties.

In Thailand, near Bangkok, there is a Meklong market. Compared to many others, it is distinguished by the fact that a train passes directly through it every day. Shortly before his approach, a loud siren is turned on, after the sound of which the sellers hastily remove the layouts with the goods from the railway rails and roll off the sheds serving as sun protection from the railway rails. The Thais themselves call the market Talad Rom Hoop, which means “Folding Umbrella Market”. After a few minutes, they return everything to their place and calmly continue their working day. 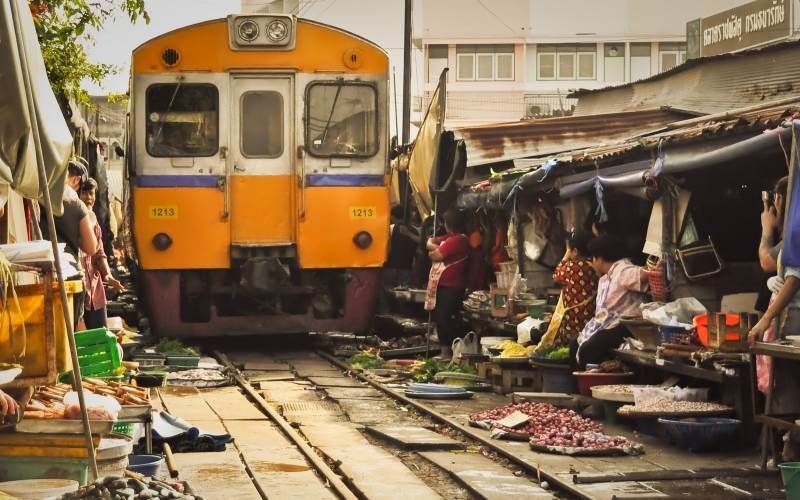 The first steam locomotive, built by Richard Trevithick in 1801, developed a speed of up to 8 km / h, and over the years the speed of movement only increased. Before the 1964 Olympic Games in Tokyo, the Japanese launched the first Shinkansen train, which accelerated to 209 km / h. High-speed rail service is developing in many countries around the world, but the modern record is again held by the Japanese. In 2015, a magnetic levitation train accelerated to 603 km / h during tests. True, the commercial operation of such trains is planned to be launched only by 2027. 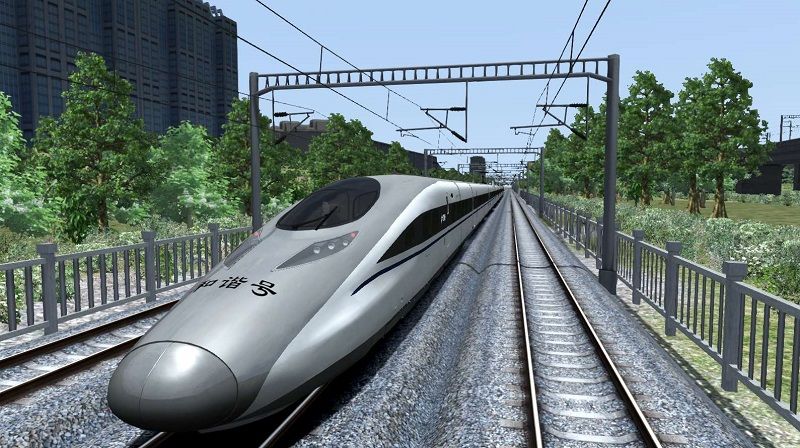 Among the usual rail types, the French TGV is considered the record holder with a speed of 574.8 km / h. The maximum speed indicator on rail tracks is 9851 km / h. Such a record was recorded in the US state of New Mexico, when, for the purpose of an experiment, a rocket engine was installed on one of the platforms.

In Alaska, the Hurrican Turn train runs from Talkeetna to Hurricane Gorge. What makes it interesting is the fact that there are no planned stops on the route about 93 km long. Hurrican Turn only stops on demand. To get on it, the future passenger just needs to give the driver a prearranged signal – to wave a white handkerchief. There can be an unlimited number of such stops. 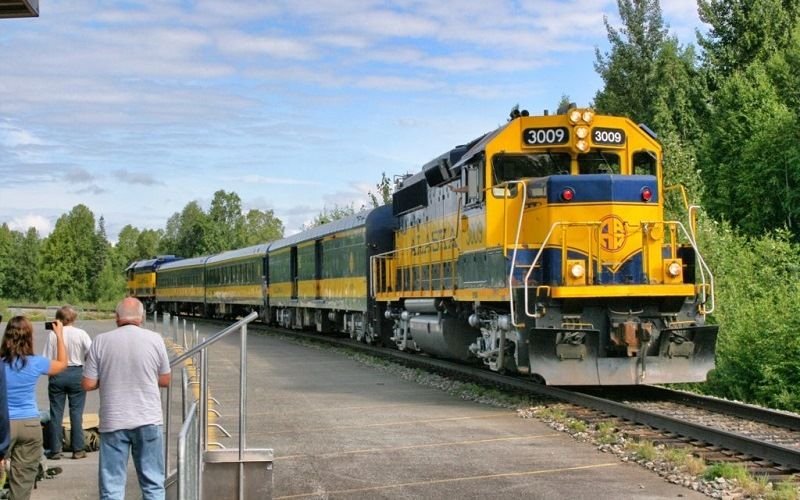 Hurrican Turn runs on the first Thursday of every month and also Thursday through Sunday between May and September. Today it is usually used by tourists: someone wants to get to the desired place in Alaska, and someone prefers to drive the full route in order to admire the scenery from the window of the carriages.

The fare for “Suite Shiki-Shima” will cost everyone from 3,000 to 10,000 dollars. It is a tourist train with included excursions between Tokyo and Hokkaido.

The train consists of 10 carriages for 34 passengers. The most comfortable travel conditions have been created for passengers: there are real baths, a dining car, as well as carriages with panoramic windows and a glass ceiling. 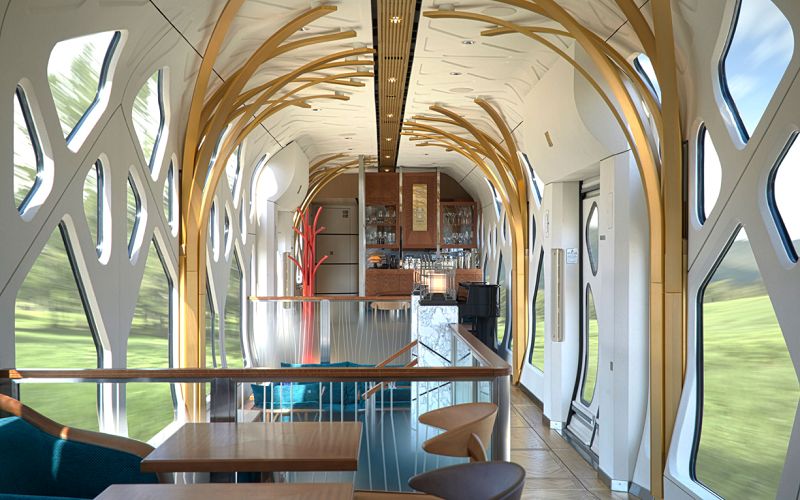 During the 4-day trip, passengers can see and visit the interesting historical and resort attractions of Japan. The first trip took place in May 2017, and tickets for the flight were redeemed a year in advance.

Experts believe that traveling by rail is 45 times safer than traveling by car. But, even in spite of such safety, there are certain recommendations where it is better to go.

First, it is advisable to choose cars that are closer to the center of the train, since in the event of an accident they receive less damage compared to the head or tail. Secondly, you should choose places that are located against the movement of the train.

Railway transport running through Japan is incredibly punctual and even 1 minute late is very rare. The Japanese managed to achieve such results thanks to a responsible approach to the selection and training of drivers. 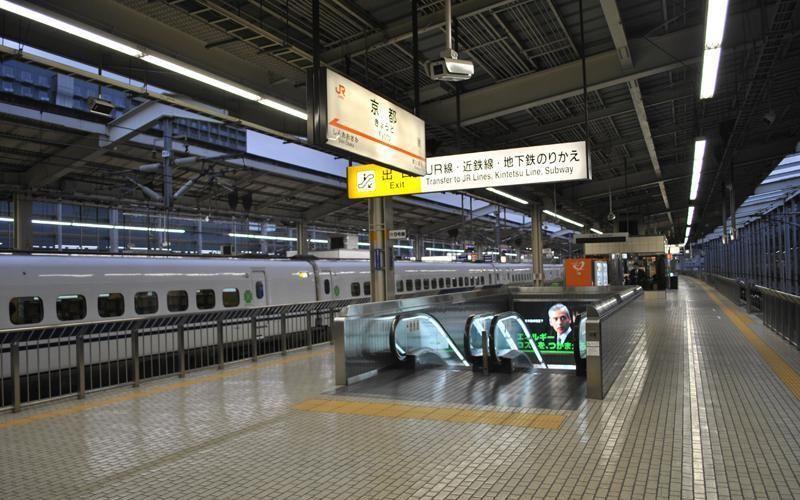 But the most important motivation for them is the system of high fines for violation of the train schedule. If such a rare fact happens, passengers not only receive an apology at the station over the speakerphone, but also an official document, which indicates the reasons for such an event. The document can be presented to your employer if you need to explain the reasons for being late for work.

The largest robbery in history

The largest train robbery was organized in Great Britain on August 8, 1963. Disguised as railroad workers, 15 criminals stopped a mail train with a Royal Mail carriage thanks to a false semaphore signal. The driver was hit on the head and, while he was recovering, the criminals disconnected part of the cars and then forced the driver to drag them to the meeting place with the rest of the gang – the Bridego Bridge. In total, they dragged 120 bags of banknotes into the truck, where there were about 2 million 663 thousand pounds (which in terms of today is equivalent to almost 46 million pounds). 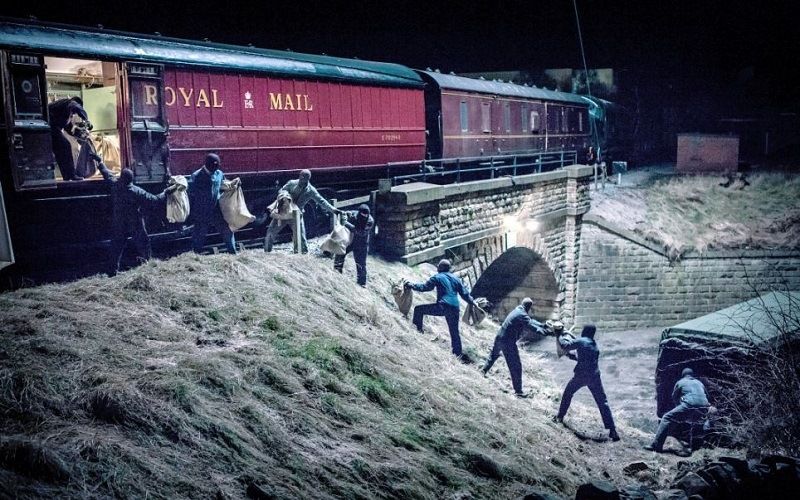 The robbers spent several days at a nearby farm, where they left many prints, thanks to which the police were able to establish their identity.

A little later, they managed to arrest 12 members of the gang, who received a total of 307 years in prison.

In 1973, Japanese engineers developed a train with carriages leaning when cornering. The idea of ​​the invention is to easily pass the turns of the tracks without reducing the speed. But at the same time, the authors forgot about one detail: “motion sickness” or the so-called seasickness, which occurred in many passengers, so they had to take extra care to eliminate the lack of “swinging” cars. 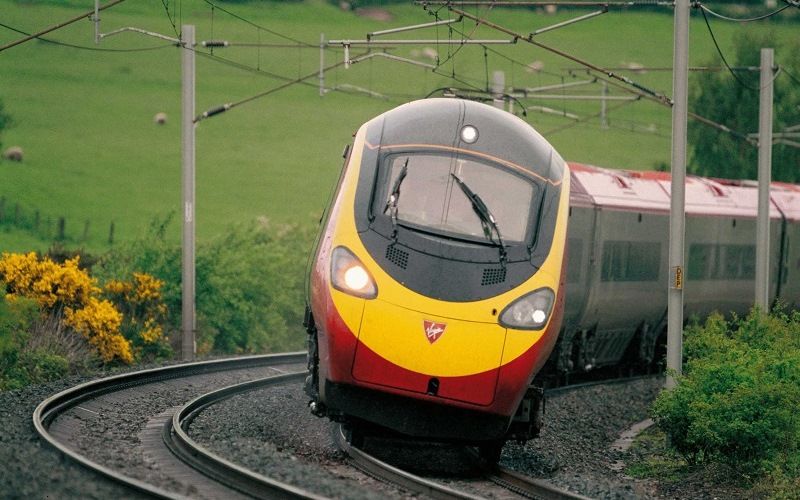 In modern trains, train drivers are now able to control the tilt level of cars up to 1 °. Now passengers are not only not threatened with “seasickness”, they often simply do not notice any changes in position while driving.

In the XXI century. such technologies are used not only in Japan, but in 14 other countries around the world.

In China, there is a train running at an altitude of about 4000 m above sea level. The highest-mountain railway in the world, the Qinghai-Tibet one, was built here. At separate points of the route with a total length of 1956 km, the train rises to an altitude of 5000 m. Extreme heights require the use of special cars: they are completely sealed, and near the seats there are oxygen supply consoles and connectors for connecting individual oxygen masks. 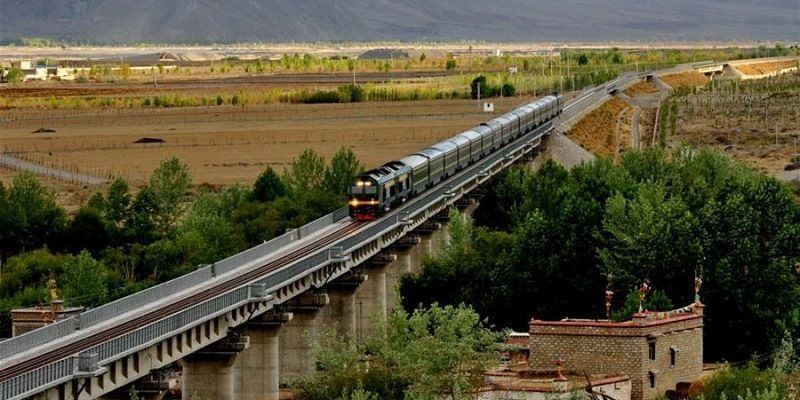 A total of 45 stations are equipped along the route, 38 of which operate without attendants. But on most of them, the doors simply do not open, because outside the windows there is very low atmospheric pressure, which is fraught with serious health problems for an unprepared person. By the way, before the construction of the Qinghai-Tibet road, the Peruvian road was considered the record holder, which was laid in mountainous areas at an altitude of up to 3 km.

Finally, we offer more interesting facts about trains related to various records in this area: