Traditions of the Turkmen people

The traditions of the Turkmen people are very peculiar and interesting. The reason is that in the culture of this country, the customs of the ancient Iranians, Turks, and the population of the Caspian coast have merged. This mixture has left its clear mark on the cultural heritage of Turkmen. Tourists really like to watch beautiful rituals, to learn the habits of life of an ordinary inhabitant of this country, especially since most of them have been preserved from the last and the century before last. 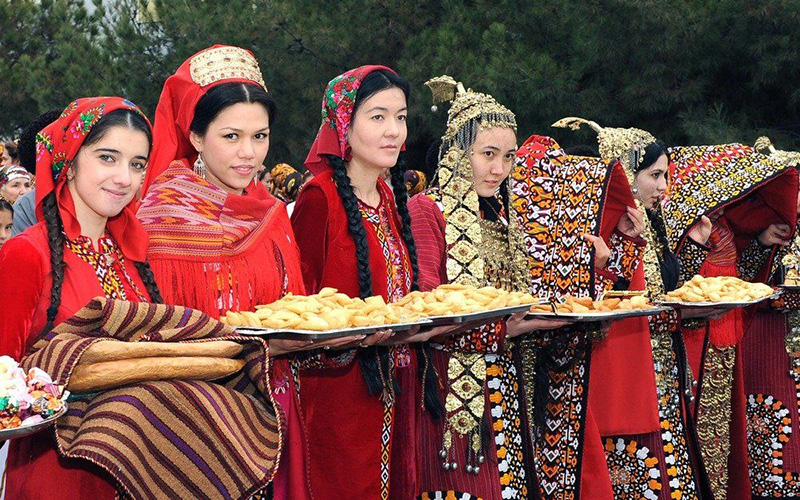 Traditionally, Georgians are considered the most hospitable nation. The guests of Turkmenistan, who come here for the first time, will be incredibly surprised when they discover that the Turkmens can compete with Georgia in this respect. This people believe that every person can be judged by how he behaves with a person who has come to the house. Obligatory words are said to each person who enters: “How glad we are to see you!”, “Your visit is a great honor for us!”.

It is necessary to quickly set the table and feed each of those who came. According to the Turkmen custom, they say: “The guest is from Allah!”. That is, to offend a guest is to resist your god, and no one wants to bring misfortune on himself and his house. This tradition is very ancient and has been passed down from generation to generation for many centuries. It appeared because without the support of travelers in the desert it would be impossible to survive. For this reason, even the relatives of the one who did not receive and did not feed the guest properly will show him their contempt. 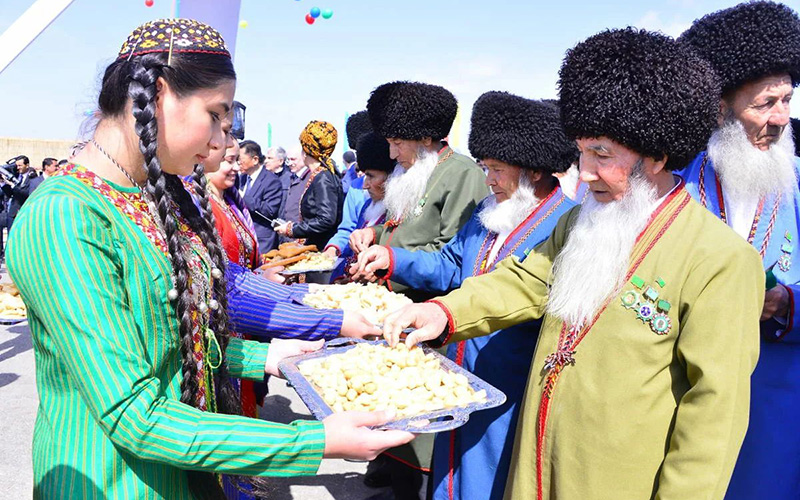 But the guest should not blunder as long as he is being gratified at the table in every possible way. Foreigners should know that certain things play a special role in the cultural traditions of Turkmenistan. One of them is a tablecloth. Wiping your hands on it is a very bad idea, and stepping on it means offending the owner to the core.

Turkmenistan is a Muslim country, and religion pervades life here. For example, before starting to eat, the host and the guest should pray. Even if a foreigner is of a different faith, one should not refuse or report it indignantly. A tribute to the traditions of the Turkmen people makes any guest beautiful.

On the table there are always holy products for Turkmens – bread and salt. Dropping a piece of bread and not picking it up, apologizing – bring trouble to the house. You also need to be careful with salt.

Relationships in the family

Many customs and traditions of Turkmenistan are connected with family relations. The spirit of kinship is very developed here, all generations of one family willingly communicate with each other. The elders in the family are especially reverent here: they are considered the embodiment of intelligence and wisdom. The elders are always listened to, their point of view is taken into account. And the one who does not fulfill the request of the old man will not find support in society, no matter how such behavior is dictated. 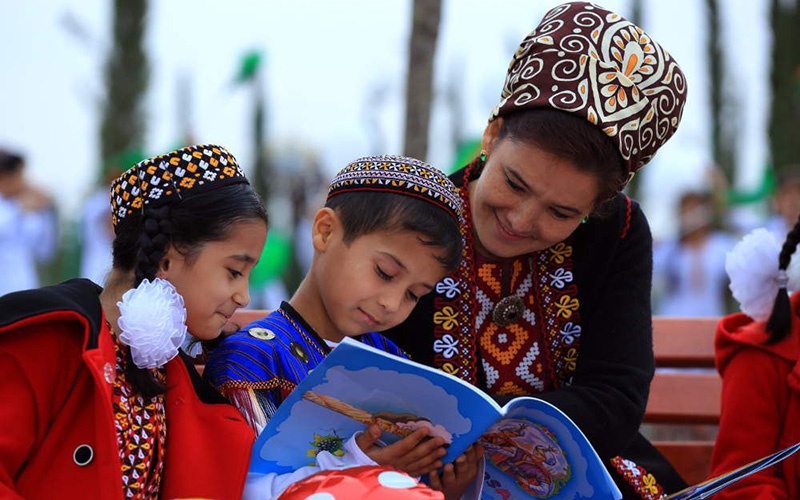 Respect for parents is another national Turkmen trait. This is not ostentatious love, but real respect and gratitude. Elders have the right to give advice to their children, even if they have already started families of their own. Most often, peace and order reign in Turkmen families. Maybe that’s why here often the whole family lives together, and does not go to different apartments.

The nomadic Turkmen people could not so easily move in their wanderings for tens and hundreds of kilometers, if not for the horse. About 5 thousand years ago, a new breed arose on the territory of Turkmenistan – the Akhal-Teke horse. These are proud and beautiful animals, which any Turkmen should be able to ride from childhood. Despite the fact that now a huge part of the population lives in cities, boys are still thoroughly taught to ride these unsurpassed horses. Tourists resting here are simply obliged to ride these reference riding horses in order to understand the nature of love for them.

The Turkmens have an interesting tradition: the Day of the Horse is celebrated on the last Sunday of April. To get to Turkmenistan at this time is a real gift. Fairs, Akhal-Teke beauty contests, horse races are held throughout the country. It is at this time that it is easiest to make sure: this breed is so elegant that it looks more like figurines with a silver or gold sheen. 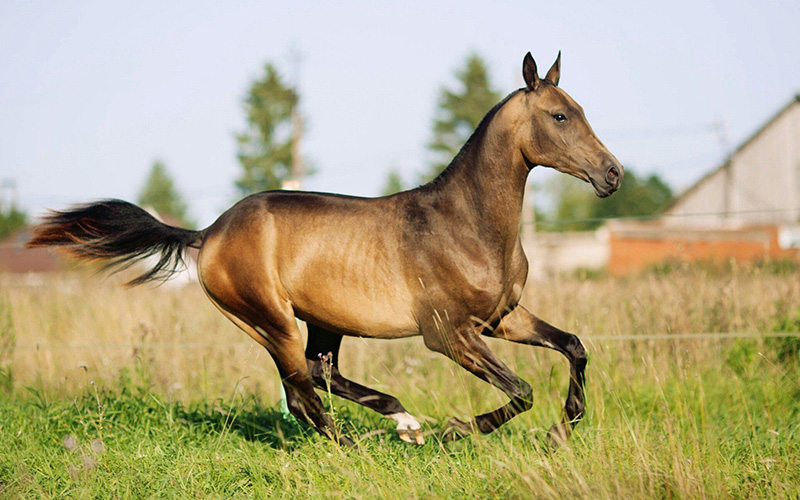 The Turkmen stables of Ashgabat are famous, where you can take riding lessons or just learn a lot of interesting things about the breed on an excursion. Here are collected elite horses that are valued more than some premium cars.

Most of all folk traditions and rituals can be seen at the Turkmen wedding. Of particular importance was the outfit, which not only made the newlyweds beautiful, but also served as a talisman.

This is the most important part of the outfit. It decorates not only the head of the bride, but also the wedding procession. According to custom, all women who come to the wedding carry with them a bundle of treats wrapped in a scarf. Even today, many girls and women invited to this holiday have bright elegant scarves on their heads. 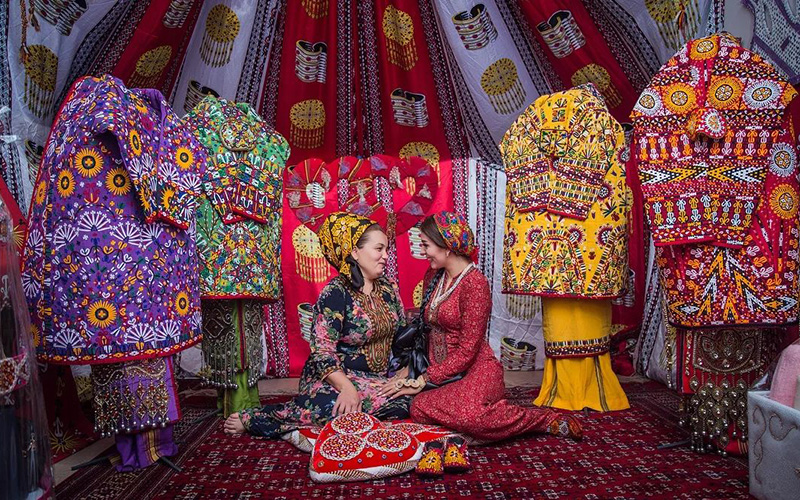 During the competitions, men tried to win exactly a handkerchief – the most expensive gift. After the young people were publicly announced as husband and wife and went to the house of their mother-in-law and father-in-law, they distributed small handkerchiefs to everyone they met on the street in order to avert trouble from the new house.

For the well-being of the bride, the dress had to be sewn from red or burgundy fabric, which was presented to her by the groom. This must be done on certain days, which are considered suitable in Muslim traditions. The fabric should be cut by a respected woman who has many children, so that the newlyweds will soon become parents too.

The dress must have ornaments and decorations. It is traditionally sheathed with silver pendants that emit a pleasant ringing with every movement. It was believed that these sounds drive away unkind people and dark forces.

So that the bride would not be jinxed, many amulets and amulets were prepared in her attire. Yes, and the girl herself was hidden from the “evil eye”, covering her with a whole cape. Camel hair, pig tusks, silver plates, etc. sewn into clothes served as talismans and amulets. On the inside of the cape, a bag of salt and coal was hemmed. 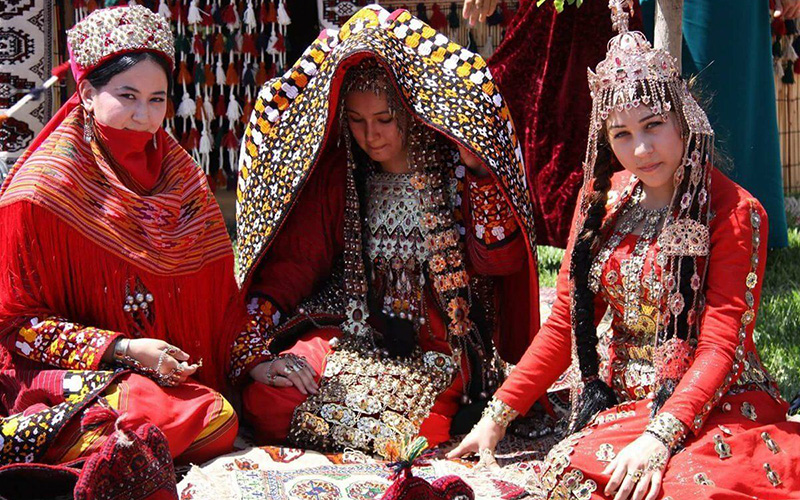 This word refers to the ceremony of changing the girl’s headdress to the one worn by married women. Bashsalma was fun: they had a comic fight between married and single girlfriends for the bride. In this playful quarrel, the victory always remained with those who had already started a family. After that, the young husband threw a bridle over the bride and pulled it lightly three times so that the girl’s headdress fell off. After that, the girlfriends covered their hair with a beautiful white scarf, and the girl’s outfit was inherited by the bride’s younger sister, so that she would soon marry successfully.

Take back the money

And this wedding tradition of the Turkmen people is very interesting for Christians. The bride spends her honeymoon with her husband, and then returns to her parents’ house. This return and a gala dinner in honor of her daughter is called “kaitarma”, and she stays with her parents until her husband pays all the dowry, which is agreed upon in advance.

One of the pillars of nomadic life is the carpet, so many Turkmen traditions and customs are associated with this item. It is versatile and multifunctional: at the same time it is a heat insulator, a place to sleep, and furniture. The standard color of this product is red, and the main element is a special ornament. It may seem to a European resident that this is just an abstract drawing, but in fact it includes graphic information about where and in which tribe the carpet was woven. These patterns are called gels. 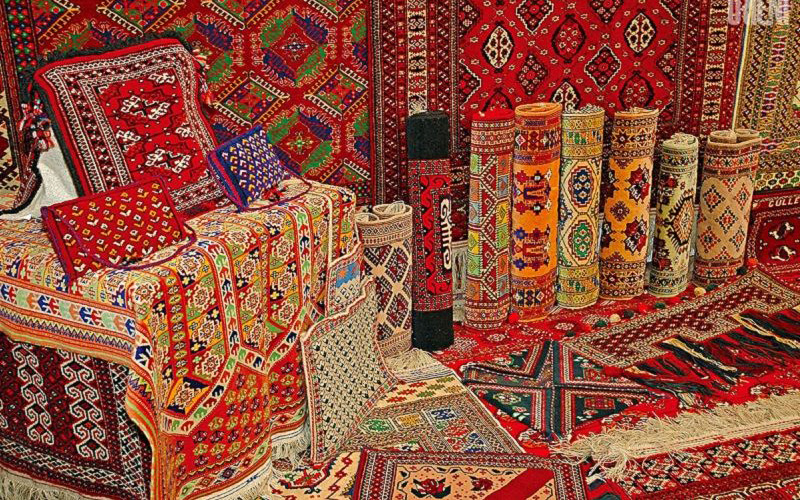 The culture of carpet weaving in Turkmenistan has been maintained from generation to generation. There is a carpet museum in Ashgabat, which presents more than two hundred unique samples. The most interesting exhibit is a carpet from the Guinness Book of Records with an area of ​​301 m2. At the end of May, the whole country celebrates Carpet Day with spectacular events, once you get to it, you remember them forever.

Among all Asian peoples, Turkmens are distinguished by a particularly respectful attitude to national clothes. She is not a thing of the past to be taken out only on holidays, like most nations. Even now, in ordinary life, on the streets of Turkmenistan, one often meets men and women dressed in modern national costumes. One of the distinguishing features is a special bright embroidery and a scarf, the way of wearing which speaks of marital status as clearly as a stamp in a passport. 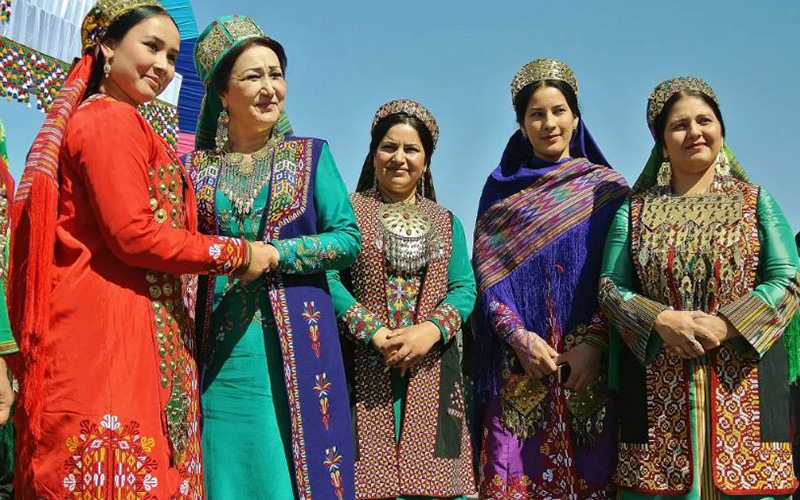 The national women’s outfit is always distinguished in Turkmenistan by a large number of decorations. At first, they served as amulets, and over the centuries, they transformed into a sign of wealth. The most common material for such jewelry is silver inlaid with stones. Both precious and semi-precious stones were used.

This people still believes in the magical power of stones. They try to wear them in earrings, bracelets, pendants. Previously, such jewelry was worn not only by women, but also by men. In rich families, even Akhal-Teke horses were decorated with them.

Turkmens are very dancing people. They have their own special dance called kushtdepdi. Figures dancing this dance are depicted on frescoes in the ancient city of Nissa. It is surprising that centuries have passed, and the movements still have changed little. In the 20th century it was recognized as national. It is performed to the accompaniment of instruments, and sometimes also to polyphonic singing. 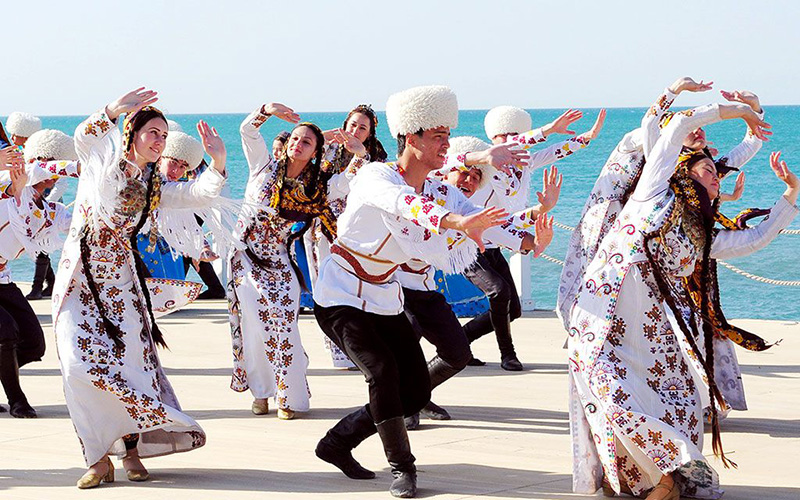 Musical instruments in this country are diverse: these are special tambourines, and jew’s harps, and discordant bells, and shepherd’s horns. Also often used are flute, bowed strings, etc.

In order to get to know the traditions and religion of Turkmenistan as best as possible, to get acquainted with religion, to touch history, you need to visit the land of this proud and noble people. As in other countries, rituals and rituals here are better preserved in the provinces, and not in large cities, so let the trip include not only visiting the capital and major attractions with a lot of tourists, but also quiet towns and villages.