Traditions of the Novosibirsk region

The traditions and culture of the Novosibirsk region have evolved over the centuries. In many ways, today they are determined by the historical past of this region, starting with the settlement of the territory by the Nenets, the appearance of the Turks here, primarily the Kipchaks, the Golden Horde, and the Russians. And then representatives of all nationalities of the USSR. 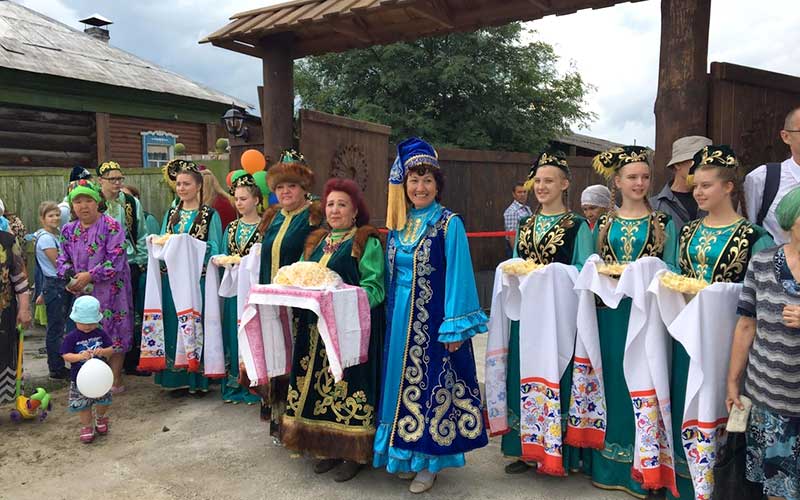 And yet, the basis of the customs of Western Siberia, where this region is located, is the heritage of the three indigenous peoples of the region: Siberian Tatars, Orsk chats and Teleuts.

Development of the territory of the Novosibirsk region

Once the territory of Western Siberia was the land of the Samoyeds, whose main occupation was fishing, hunting, cattle breeding and reindeer herding. Perhaps they would have become the indigenous population of this region today, but back in the 1st millennium BC, events occurred that are considered a turning point for the future Novosibirsk region. 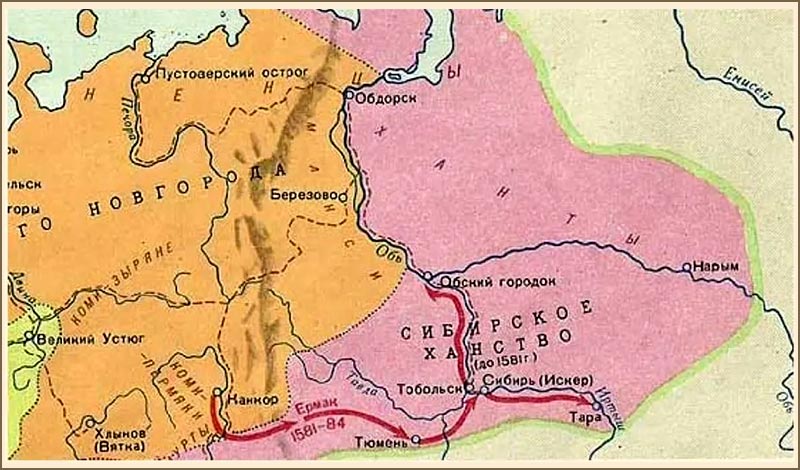 The Xiongnu tribes, having been defeated by China and deprived of their lands, were forced to develop new territories, pushing the Nenets out of Western Siberia to the north.

In the XIII century, the formation of a new ethnic group for this land began – the Siberian Tatars. Due to the migration of the Turks from Altai and Kazakhstan, the Siberian Khanate was formed. Over the next two centuries, there was an active assimilation of the Turks, Khanty, Kipchaks, Kalmyks. 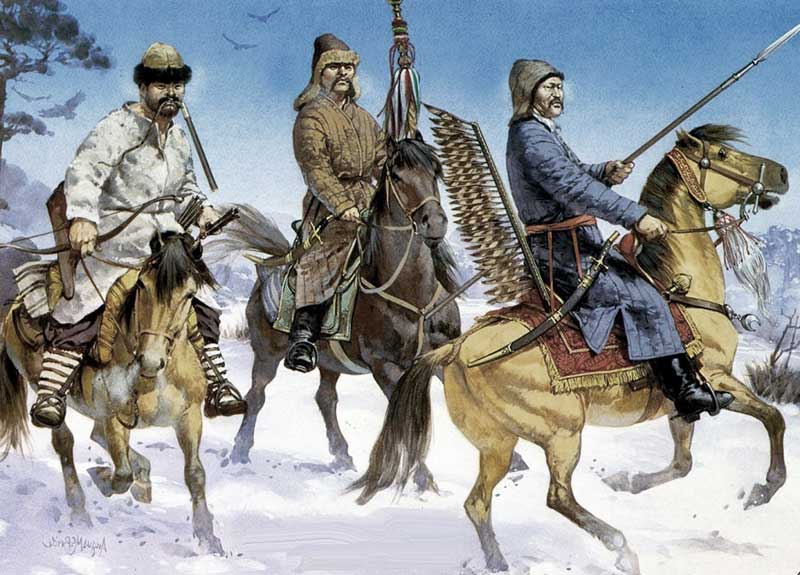 Orsk chats are considered to be the second major indigenous people of the Novosibirsk region, whose culture influenced the formation of the traditions of this region. From the khanate to the submission to the Tomsk governors, they moved back in the 16th century.

Teleuts are considered the most ancient here. The customs and traditions of this indigenous people of the Novosibirsk region date back to the cultures of the Turks, Selkups and Yenisei Dinlins. 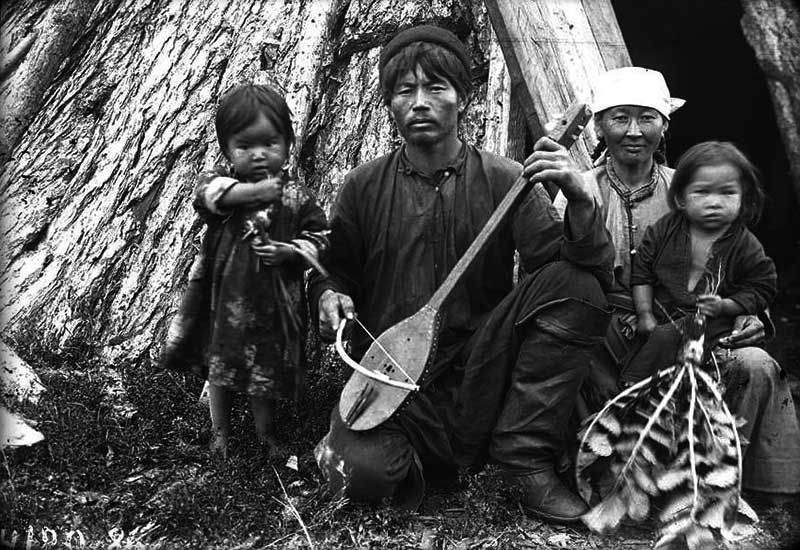 Perhaps it was they who most of all preserved the foundations of the life of their ancestors. Women even in everyday life wear national costumes. The Teleuts protect their language, they believe in pagan gods and Christ at the same time, and go to the shaman for help.

This ethnic group is considered the main one for the Novosibirsk region. The traditions of the people, despite the assimilation of its representatives with many other nations, have remained unchanged for several centuries.

Most people profess Islam, some consider themselves Christians, while all the Tatars of Novosibirsk adhere to their folk tradition of Tangrianism. Belief in the supreme deities of Tangri and Kudaya is strong even today.

The first is the patron of the sky, the most important deity. Belief in it is characteristic of all Turkic peoples, and the roots of Tangrianism go back to the time of the Xiongnu tribes. Tangri is associated with the masculine principle, which controls the fate of a person.

Today, the rituals of Tangrianism in the Novosibirsk region have been preserved only as part of the traditions of the annual folk holidays. Remembering that they always prayed to the supreme deity in open areas, choosing places at the foot of the mountains, in the spring, when the buds are just beginning to bloom on the trees, in many areas they fence off large glades and arrange a general festivity.

Previously, the time and place of the holiday was indicated by the shaman. There were even certain sacred places near reservoirs, at the foot of mountains, at stationary sacred hitching posts or poles. In the chosen clearing, hearths were laid out and a sacred fire was lit: they did this on the cardinal points. 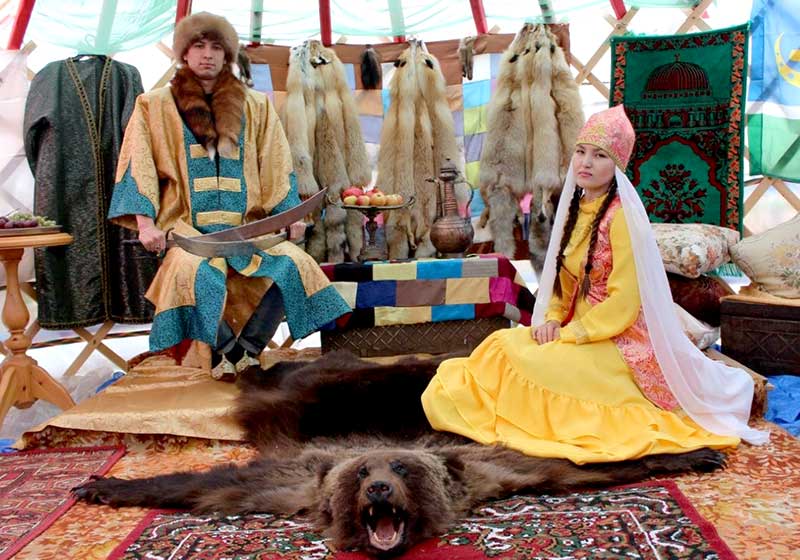 A sacrificial ritual was obligatory for the holiday: rams, sheep, horses were brought for Tangri, various dairy foods, grain and flour were taken with them. The offering of a sacrifice was reduced to kindling fires with juniper around her and sprinkling her with milk vodka, milk and blood of the brought animals. At the same time, those gathered prayed to Tangri, raising their hands to the sky and making prostrations.

The Siberian Tatars inhabiting the Novosibirsk region revered not only the supreme deity, but also the spirits of the forest, mountains, water, and fire. This people has a tradition of making idols in honor of good defenders.

For example, in the spring, a small piece of bark is cut from a birch and a small chrysalis is made from it. This is a kind of amulet to protect the home and even the whole settlement from evil spirits. The pupa must be hidden in a special sacred place, away from prying eyes.

The Tatars of the city of Barabinsk have preserved an interesting tradition of making amulets from the revenge of the dead. This is the so-called kurchak doll, which must be placed in a small wicker basket and left near the burial place. This people is characterized by the erection of entire barns, in which zoo- and anthropomorphic spirits settle.

Siberian Tatars still actively celebrate their national holidays, the calendar of which is tied to the cycle of agricultural work. The New Year for them comes on the day of the spring equinox on March 22 and is called Emel.

It is in the Novosibirsk region that an interesting tradition associated with this holiday has been preserved. It reflects the outlook of the Tatar people as a whole: in order for the host spirits of the places to be favorable to people in the next agricultural year, they need to make a sacrifice, which is called sadaka. Eggs, bread, dairy products and coins were usually prepared for the patrons. 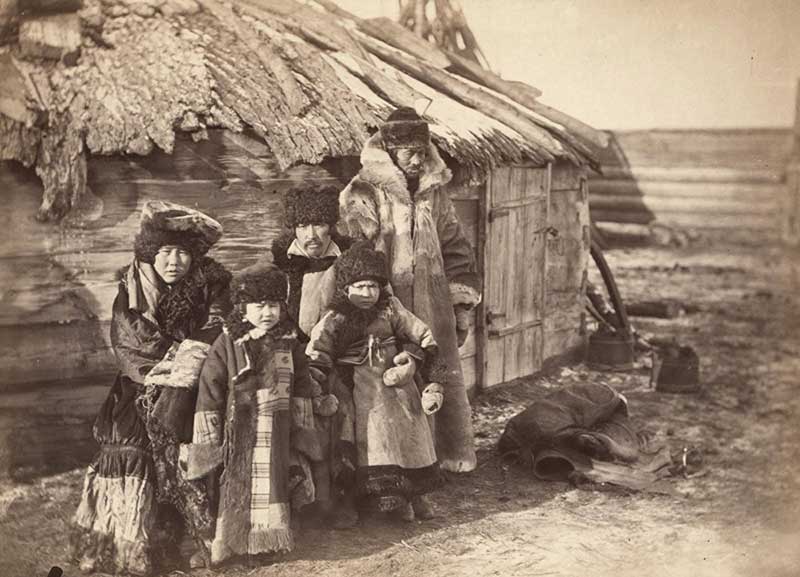 Today, the holiday of Emel has changed somewhat, and sadaka is a comic ritual: young people gather in a large company and go from house to house. At the gate, you need to shout: “Sadaqa.” This is a call to the hostess, who should go out into the yard and begin to scatter various treats on a specially cleared area.

No less attention is paid to horses on the Tatar New Year. To make the whole season successful, horse races are arranged, and each owner chooses the best animal for them.

In the countryside, an interesting ritual of treating birds with porridge has been preserved. A brew of wheat is specially prepared for him, and on the appointed day, all people go with their porridge to the field for a joint meal. Part of the treat is laid out in small bowls or scattered on the ground, calling the birds.

Children in Novosibirsk love the Ice Drift Day tradition. For the holiday, they make a lot of paper dolls and float them on the water, hoping that with these totems all misfortunes and illnesses will go away. Men and boys on this day should throw a coin into the river for good luck.

Chats are another indigenous people of the Novosibirsk region, which is considered an offshoot of the Siberian Tatars. In the past, this ethnic group occupied large territories, but over time it assimilated, and today its representatives live only in certain areas of this region. The nationality absorbed the genes of the Khanty, Kipchaks and Kimaks.

The general foundations of chat life are similar to Tatar ones: this concerns, first of all, beliefs. They also make totems to protect their homes, believe in Tangri, resort to the help of shamans. The pagan foundations of faith in some life moments still prevail over the Muslim and Christian ones.

Chats respect the spirits of nature. Even children know that Urman lives in the taiga, who can be seen by his black robe and black horse. The cult of brownies remains unshakable: these are little old men (less often a girl with golden hair) who protect the home. According to the belief of the chats, brownies sometimes move into cats: there is a special attitude to this animal here. 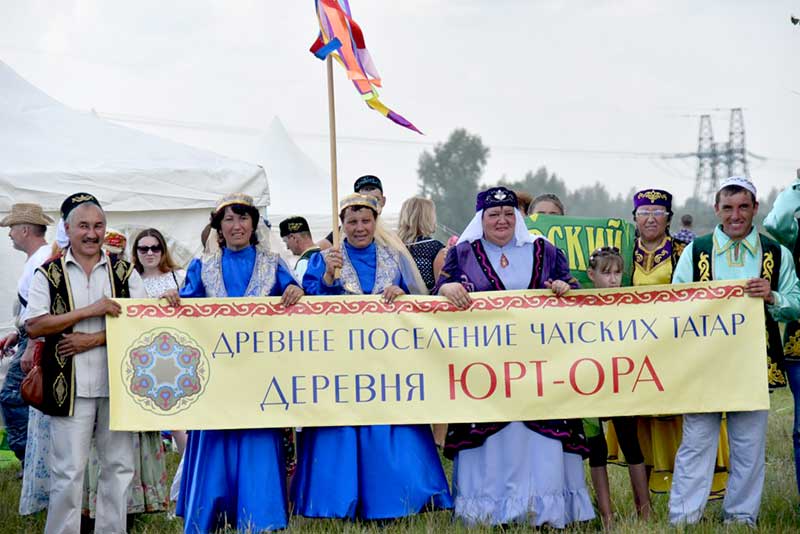 Today, in order to learn about the life of chats, one must go to the village of Yurt-Ory. It is here that most of the representatives of this ethnic group in the Novosibirsk region are concentrated, although there are only about 100 of them.

Through the efforts of local residents to preserve the unique traditions and culture of the chats, the “Manor of the Chat Tatar” was built here. It is a classic farmstead of the ancestors of this ethnic group.

In the center there is a hut made of logs, inside the decoration of the house is recreated: bunk benches, on top of which rugs are laid; small low tables for dining. A mandatory attribute, a chest, has also been preserved. 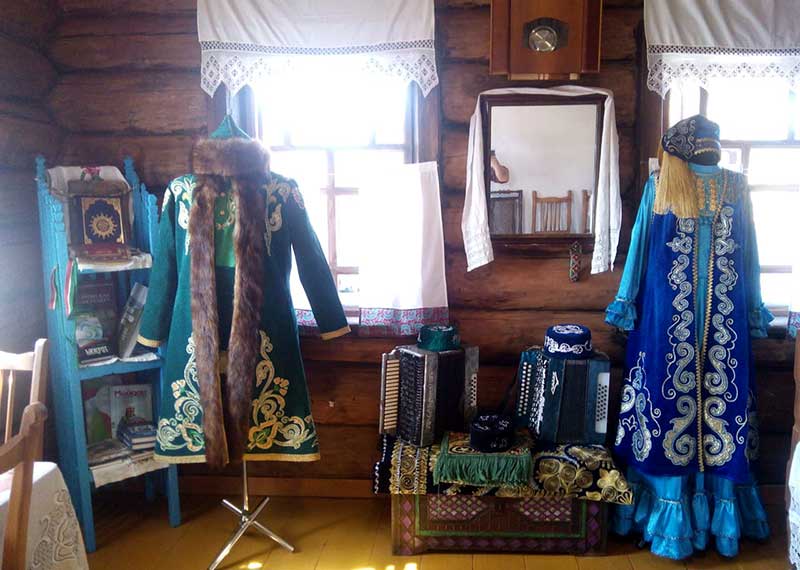 Until now, the habitual way of life for chats has been preserved here. People here go hunting and fishing, breed horses and cattle, and gather. The craft of skinning has been passed down from generation to generation: Chats were once masters in making clothes from the skin of birds.

The Teleuts are considered the heirs of the Huns who came from China. This is the most interesting indigenous people of the Novosibirsk region, in whose traditions the culture of Russians, Turks and Altaians is closely intertwined, the beliefs of Burkhanism, shamanism, Islam and Orthodoxy are mixed. 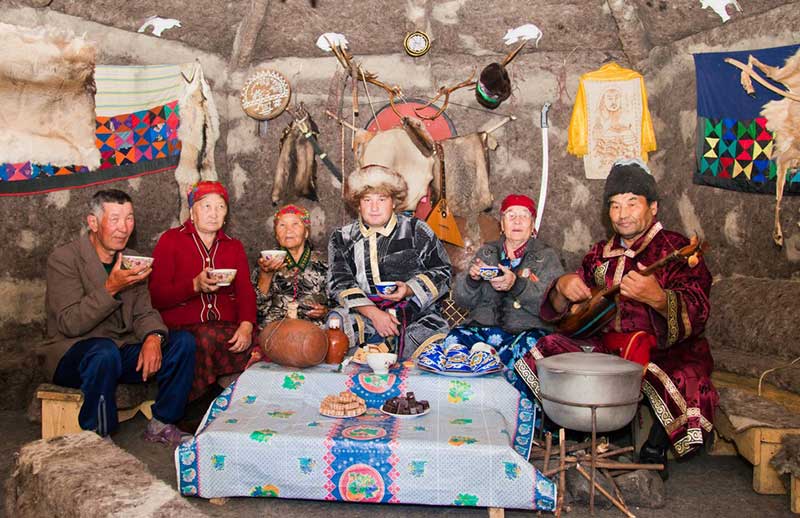 Teleuts can celebrate the Trinity and Somo at the same time, and they also have huge dumplings with horse meat or lamb, and you will not find such a dish anywhere else.

Like other indigenous ethnic groups of the Novosibirsk region, the Teleuts still have strong idolatry. Each house has a collection of family totems: these are small wooden figurines that are stored in a special sacred kayyrchak box.

It is noteworthy that only a shaman is trusted to carve the faces of idols so that he instills a special protective energy into the doll.

If among the Tatars and chats Tangri is considered the supreme deity, then among the Teleuts it is Bai Ulgen, or the mother of all things. According to the tradition of the ancestors, the world here is divided into five spheres.

After the Russians came to the region, pagan beliefs gradually intertwined with Christian traditions. 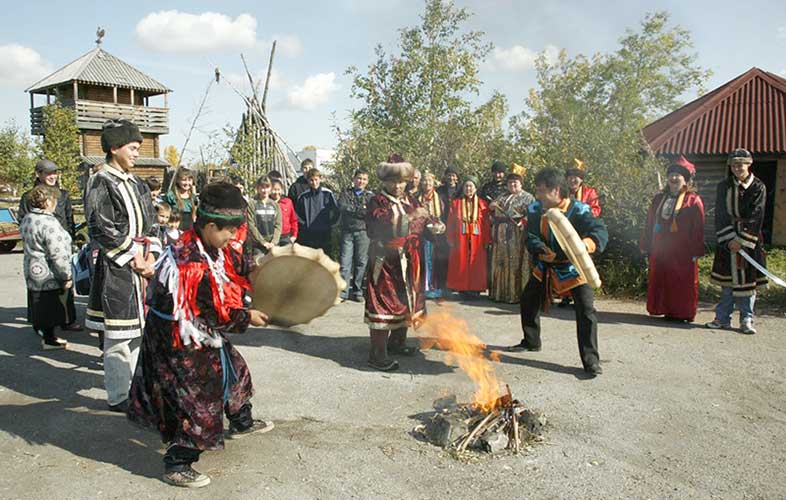 Indicative in this regard is the joint celebration of the Trinity and Somo. Earlier on this day, all the inhabitants of the settlement gathered in a birch grove. Led by a shaman, a single prayer was performed there, after which each family took a tree for themselves and carried it to their home.

These were the so-called Somo idols, to which red and white ribbons were tied for protection. Today, the holiday is not fully celebrated, but the tradition of putting birch trees near the house is preserved.

The Novosibirsk region is a unique region, where, along with ordinary modern life, traditions are preserved, according to which the ancestors of the indigenous ethnic groups of this region lived.

Assimilation with other peoples could not completely eradicate their way of life, thanks to which historians and ethnographers have the opportunity not only to plunge into the past, but also to revive many original customs and rituals.