Traditions of the Feast of the Intercession

The Intercession of the Most Holy Theotokos is a real folk holiday, full of traditions. Orthodox celebrate it on October 14 and strictly follow the signs – winter is predicted on this day. As on the Presentation of the Lord, winter meets spring, so on Pokrov the seasons succeed each other. Of all the Orthodox holidays, this day is considered “maiden’s”, since earlier it was on October 14 that the time for weddings began. 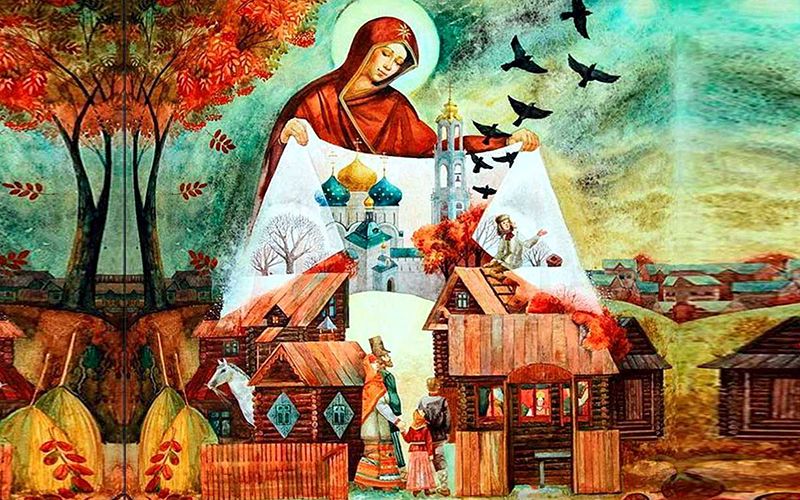 history of the holiday

In Russia, the tradition of celebrating Intercession Day was established in the 12th century, although the events that the Orthodox remember took place several centuries earlier in Constantinople. Then Byzantium defended itself from the pagans who besieged its capital. The inhabitants of the city fervently prayed that the Lord would protect them. During one of their services in the Blachernae Church, where the vestments of the Mother of God were kept, Blessed Andrei and his friend Epiphanius stood at prayer. Suddenly the men saw the Mother of God walking towards them from the door. She knelt down and, together with the angels accompanying her, began to earnestly pray to the Lord for the salvation of Constantinople. Then the Mother of God removed the omophorion from her head and spread it over all the people who were in the temple. Symbolically covering the heads of a small number of parishioners, she, as it were, protected the whole city from death – the pagans were defeated, their ships were wrecked by a storm.

In Russia, the tradition of celebrating the day of the Intercession of the Most Holy Theotokos was introduced in 1164 by Prince Andrei Bogolyubsky. He considered Blessed Andrew his patron, so he reverently treated every moment of his life. Having learned about the vision of the Mother of God to his saint, Bogolyubsky could not leave this event unattended: a new date was added to the church calendar (October 1 (14), and a year after that, by a separate decree, the stone church of the Intercession-on-Nerl was laid near the prince’s estate. 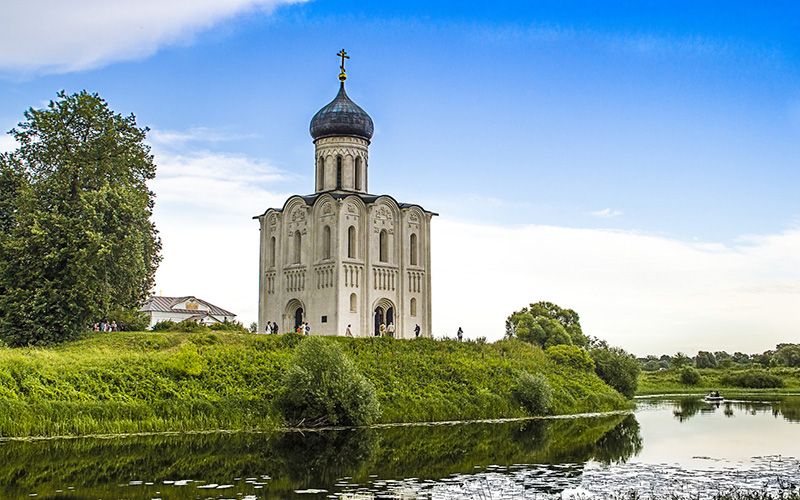 This holiday is considered “their own” and representatives of the Cossacks. This tradition was founded in honor of the victory over the Turks near Azov in 1641. When our brave warriors no longer had the strength and their defeat was about to come, the Virgin in crimson clothes appeared before her eyes and inspired them to win.

Signs and traditions on Pokrov

This is one of the most popular church holidays in our country. Despite its religious origin, both Orthodox and Muslims believe in omens. They meet winter with him, give girls in marriage, arrange noisy fairs. Today, many traditions have lost their former meaning, but our ancestors tried to live according to their calendar, in which October 14 was considered a special date.

By mid-autumn, peasant Russia was already completing all field work. The harvest was harvested, supplies were prepared, it was time for household chores and quiet gatherings at home. Intercession Days began the season of auctions and fairs. 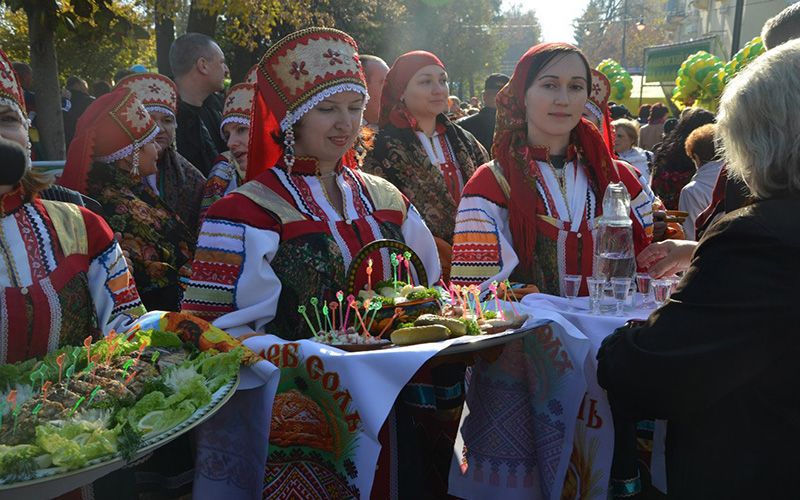 For centuries, people have been watching nature, so there were signs for Intercession Day on October 14th. Despite the fact that these traditions echo the pagan past of our ancestors, people still carefully observe the world around them to know what winter will be like next year: 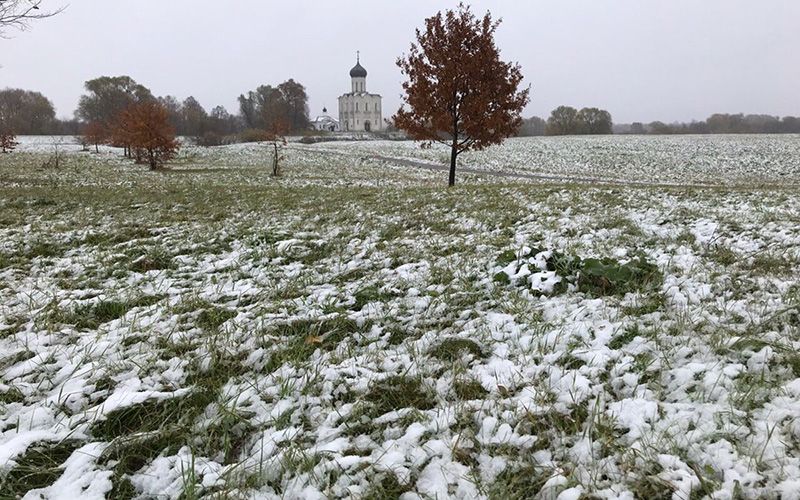 According to tradition, they prepared for the Intercession for the winter at home. There was a custom to heat the dwellings with branches from an old apple tree or plum tree, so that the house would remain warm all winter, while saying: “Cover, heat the hut without firewood.” Until October 14, a lot of firewood was necessarily harvested as a guarantee of warmth in the following harsh days.

The day before the holiday, the cattle were let out for the last time to graze in the yard. Then the animals were put in stalls until spring and they were fed with the last sheaf collected from the field, believing that this would save the household from starvation.

What did they cook that day?

According to tradition, having come to Pokrov from the church, the hostesses arranged a holiday in the house. There is a custom to cook pancakes on this day and perform the ritual of “baking” the corners. The older woman in the house baked small pancakes. She divided the first one into 4 parts and laid out these pieces in the corners of the room. So they appeased the brownie, saying: “With pancakes on Pokrov, winter is not terrible.” 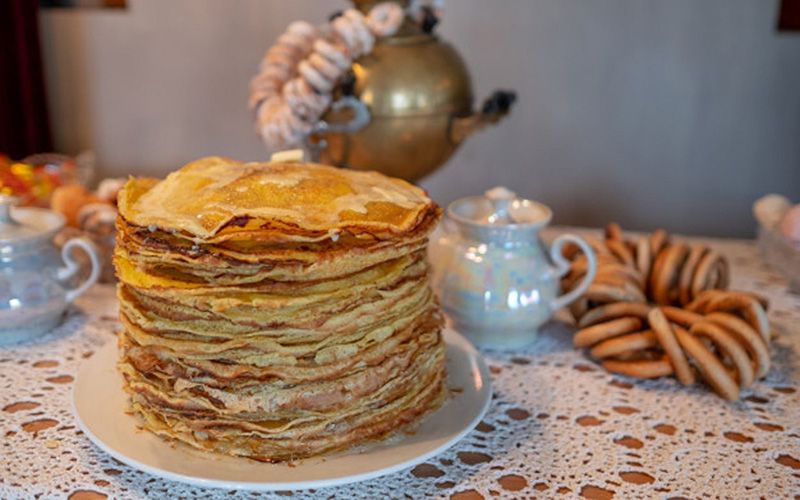 From the pagans, the custom of treating the brownie with mushrooms collected on this day (it can even be inedible) has been preserved.

Dishes prepared from the harvest of this year were always put on the table. The various pastries were especially appreciated. The goose with apples was considered the main treat: this dish was a symbol of prosperity in the house. The bird was necessarily baked in families where there were girls of marriageable age: geese are considered monogamous, so if you eat a piece of meat from this bird, peace and love will reign in a future marriage. If the holiday fell on Wednesday or Friday, which the Orthodox consider fasting, then fish was cooked instead of meat.

After the Feast of the Intercession, the wedding season began. This was due not only to the fact that the main work was ending and young people had more time to relax, but also to the fact that the Virgin Mary herself patronized the girls and helped them to arrange their fate well. 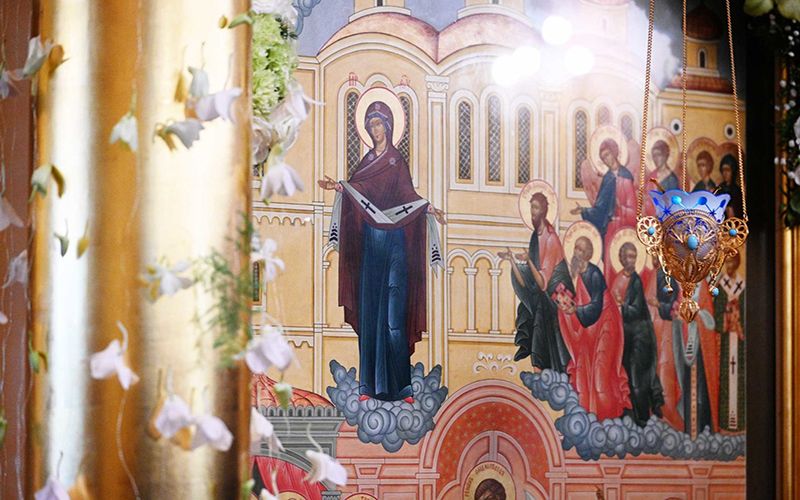 Unmarried women and girls hurried to the temple in the morning, because there was a sign that the one who first puts a candle at the icon of the Virgin will be the first to get married this year. In the evening, everyone gathered for general gatherings and believed that the louder and more fun to spend time in the company, the sooner the groom would appear.

In order to get married in the near future, the girls had to enlist support from the female line on Pokrov. On the holiday and in the first days after it, you can’t swear with any women of your kind, you should treat them with respect and pay as much attention as possible. Throughout the holiday, future brides had to walk with their heads covered, which increased the chances of getting married in the near future. 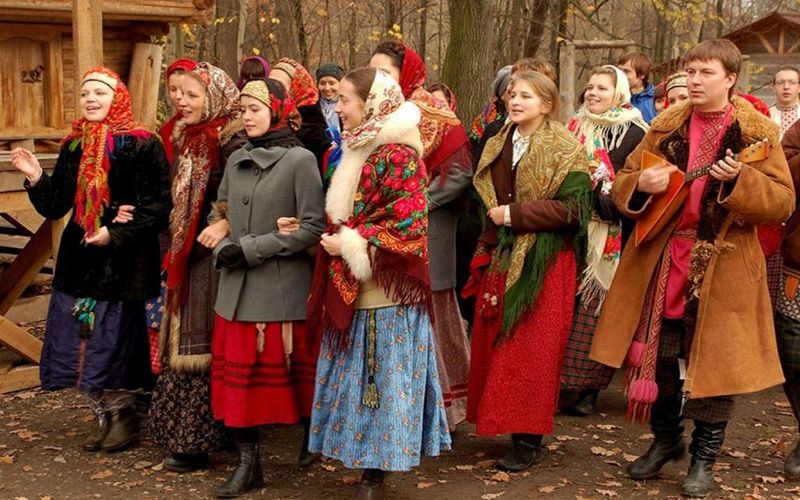 If the couple had already picked up, then the future newlyweds tried to set the wedding day on the Intercession of the Most Holy Theotokos: according to signs, this promised the spouses a long, happy life. It was considered a special luck if during the ceremony snow began to fall – the Mother of God herself sheltered the young from everything bad.

On the eve of the holiday, the girls were guessing. Before going to bed, it was necessary to say: “Cover the earth with a snowball, and cover me with a fiancé.” After that, keep complete silence and wait for a prophetic dream – if you dream of a guy, then you can prepare for the wedding this year. Another interesting fortune-telling is on salted dumplings. The girl specially prepared 5 pieces of dumplings, salted the stuffing well. I ate them before going to bed, saying: “Betrothed, mummers, bring me some water.” Whoever dreams, he will become the groom.

At general gatherings, the girls guessed on threads: they all set fire to equal pieces cut from one coil, and watched which one of them would burn out faster, that one would marry first. 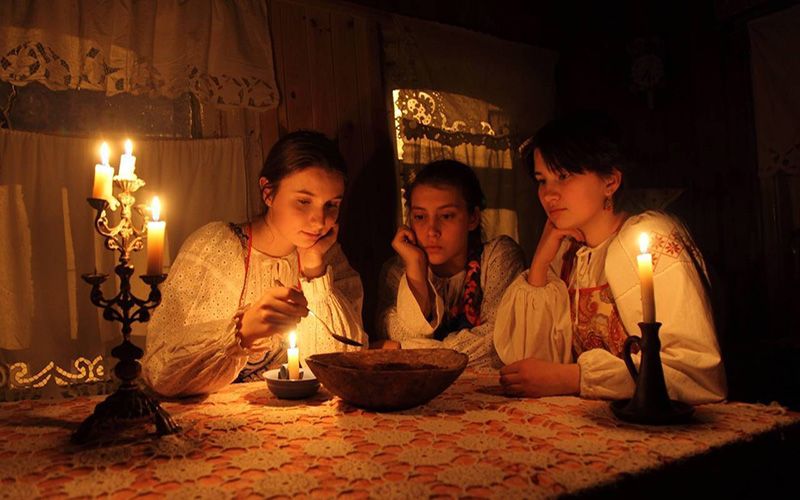 As with any major Orthodox holiday, no homework is done on Pokrov. This tradition also has pagan roots – it is necessary to devote the whole day to rest and appease the hibernating brownie. To keep your home clean, you should not swear with loved ones. It is good if a person with a pure heart meets everyone who crosses the threshold of his home. This promises prosperity and joy for a long winter.

On this day, you can not engage in any money matters, especially borrowing and lending. Some advise not even to go to the store: to give money – to losses, and to take – to receive the sorrows of another person. 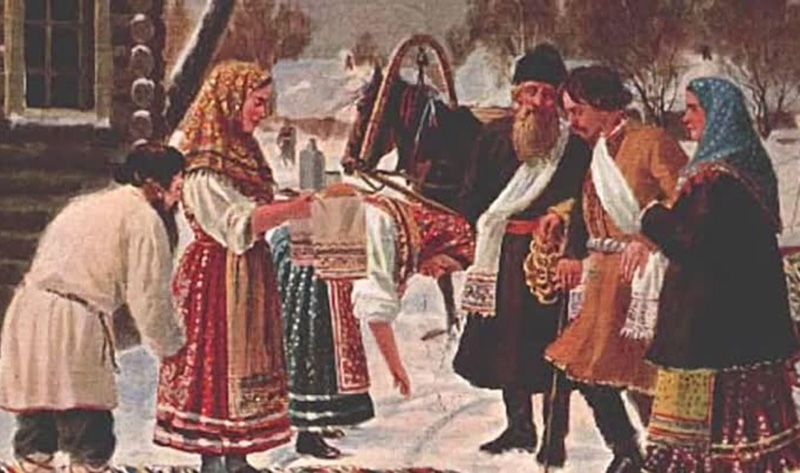 A girl should not be denied a guy if he is wooing on this holiday. Marriable beauties were even afraid if a young man appeared on the threshold of their house – so you could get a drunkard as a husband. Pregnant women on the Pokrov must not step over what grows on the grass. This may cause a miscarriage. But if someone meets a future mother on the way, then this is something good.