Traditions and customs of Poland

The culture and traditions of Poland are a pagan-Christian symbiosis. The rituals of this people were formed in the conditions of political and geographical changes: the Poles, being Slavs, were influenced by the Byzantines and Ottomans, survived the Hanseatic times, were under the occupation of the Germans, and felt the influence of communist ideology. Most of the population today professes Catholicism, so the traditions here are closely connected with religion, but pagan rituals have already remained in the form of games and have lost their magical meaning. 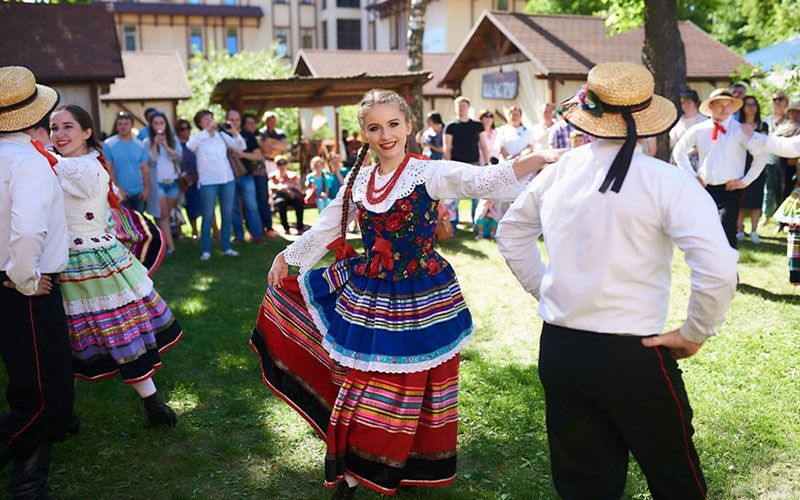 The traditions of Christmas in Poland are somewhat different from how Christians in other countries celebrate this day. Here, the family is especially honored and they believe that not a single person in the world can meet the birth of Christ without loved ones. One of the customs of this holiday is to invite to the table all those who risk being left alone on Christmas. It doesn’t matter if it’s a family member or just a tourist.

Polish traditions say: especially honor the eve of the holiday, or Christmas Eve. On December 24, bustle reigns in the houses – all family members clean the house, decorate the Christmas tree, prepare food and gifts. In the evening, the family gathers for dinner. According to the national tradition in Poland, they always put an empty plate on the table for an unexpected guest, in the image of which Jesus himself can come to the house.

Religiosity on this day is manifested in everything. To receive God’s blessing, the Poles put some hay under the festive tablecloth, symbolizing the manger for Christ the Infant. Each guest is given wafers (unleavened ritual biscuits). According to Polish customs, one should share one’s wafer with other people at the table, which symbolizes the breaking of bread during the Last Supper. 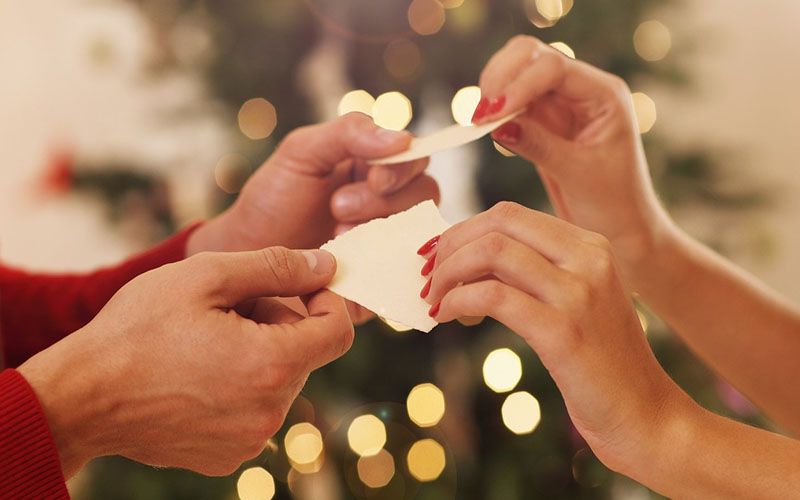 Dinner is divided into 2 parts. Until midnight, only lean meals are eaten. There must be 12 of them – according to tradition, the Poles put wheat kutya with honey, nuts and raisins, mushroom borscht, fish and dumplings with potatoes in the center of the table. Compote and donuts are served for dessert. After midnight meat dishes and wine are served. They like jelly, flyachki (prepared from cow stomachs), cabbage rolls very much here.

After dinner, the theatrical performance begins. As a rule, children take part in it, but adult performers are also welcome. In the Polish tradition of celebrating Christmas, the rite Chodzenie z gwiazdą has been preserved. In our opinion, these are carols – a group of people dressed in costumes gathers, walks through the streets and courtyards with a model of the Star of Bethlehem and sings songs. The mummers are also sure to show skits on biblical motifs. Actors are all generously treated, and these days they also always give money. 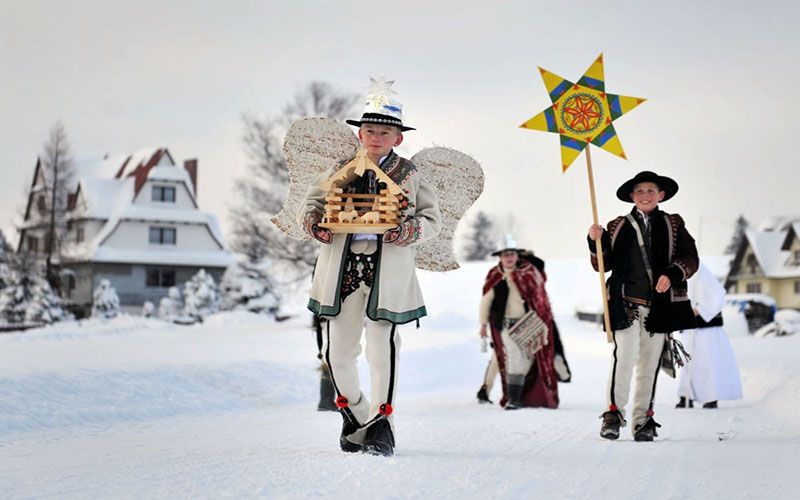 The Polish people have a tradition of celebrating a holiday in honor of St. Sylvester. It falls on December 31 and surpasses even the New Year in significance. Such veneration of the saint is connected with the legend that in the distant 4th century, a Roman bishop named Sylvester, with his prayer, stopped the invasion of the gigantic serpent Leviathan. After this, the saint began to be revered not only in Poland, but also in Hungary, Austria, the Czech Republic, and Switzerland.

The evening “on Sylvester” is also called Christmas Eve among the Poles, but not strict, since fasting is no longer in progress. Usually this is a very hearty and fun holiday. The table is bursting with traditional dishes, guests are dancing and playing games. One of the traditions of the Polish New Year is getting rid of debts. In order to be lucky, before Christmas Eve, they always put a carp scale in the wallet, which was prepared for Christmas. 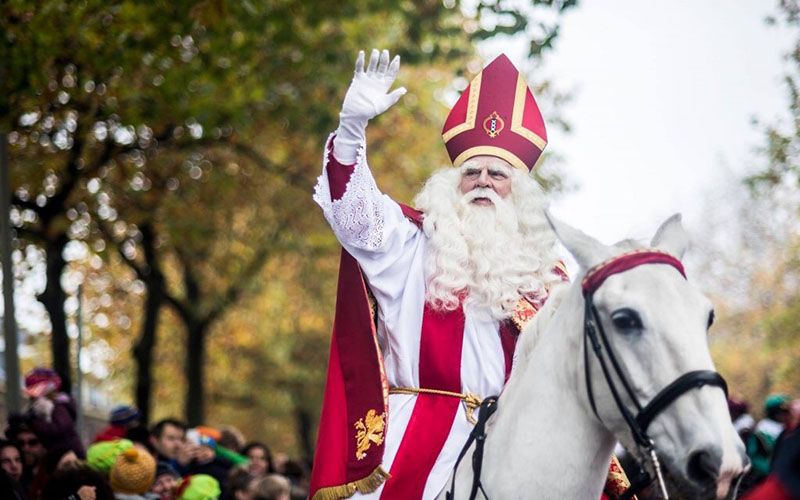 A special sign – “on Sylvester” is never cleaned in the house, so as not to sweep away good luck. On the eve of the holiday, housewives focus on cooking, because the more abundant the table, the more satisfying the year will be. Smartly dressed guests gather at dinner, women put on new dresses, do not even cut off their tags, which, according to signs, helps to attract the opposite sex. Single and divorced ladies put at least one poppy seed in their shoes so that Sylvester will send them a groom next year. The girls listen very carefully to everything that is said around them: what first name they hear will be the name of the betrothed.

In the traditions of Poland – a holiday of seeing off winter. This day is called “the day of Maganna”, and it is considered an echo of the pagan past of this people. Seeing off winter begins with the manufacture of a straw effigy, symbolizing the cold. Maganna is dressed in bright clothes in folk style. This is followed by the ritual of burning an effigy. First, they undress him and scatter his clothes across the field. The straw doll itself is set on fire and thrown into the water. From there, the scarecrow cannot be reached with your hands: according to legend, a person can lose strength. Also, you can’t turn around after the floating Maganna, because the scarecrow can take revenge and take the health of all relatives with it. If there is no reservoir nearby for the ceremony, then the straw doll is drowned in an ordinary puddle. 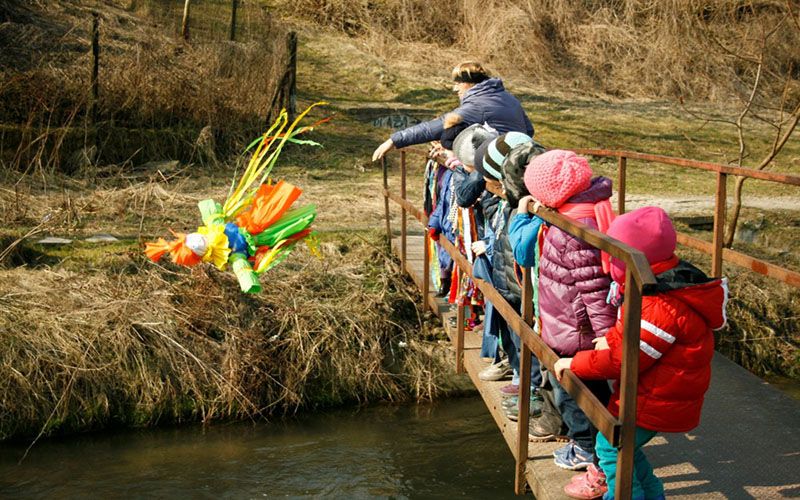 Poles say goodbye to winter on the fourth Sunday of Lent. For our time, this is no longer a magical ritual, but just a game, entertainment. Children are especially fond of this day, to whom teachers, for the sake of old fun, are even allowed to skip classes. That is why farewell to Mazhanna is popularly called the “day of the truant”.

This is one of the most majestic holidays in the country. In the traditions of Poland – the custom to fast. It is not strict, like the Orthodox, but still this people has its own limitations. For 40 days, true Catholics eat only herring and rye flour soup, so before Easter there is a rite of “burial” of these dishes, but basically it has been preserved only in the villages.

Holy Week is considered the strictest. It starts on Palm Sunday. The Poles call it Palm or April. Like the Orthodox, Polish Catholics on this day consecrate willow twigs, decorated with bright ribbons. Also in the cities in the central squares, competitions are held to build the largest “palm tree”, decorating the tree with sweets and cookies. 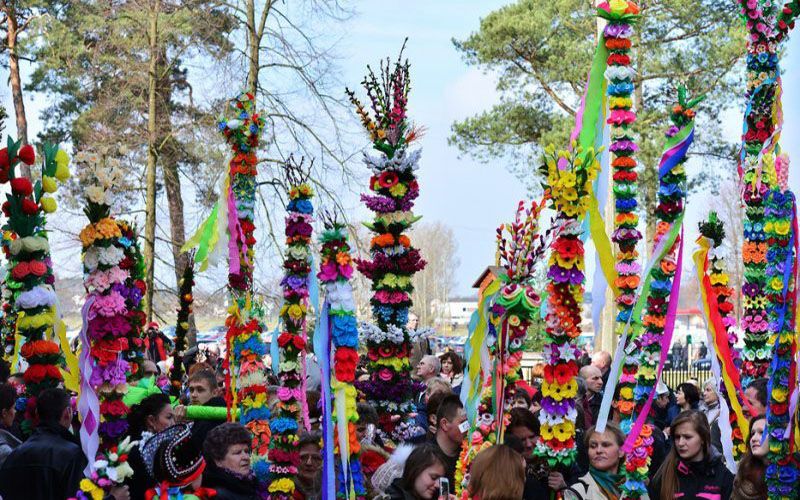 For the next 5 days, people prepare their home for the holiday. On Saturday, the offerings are consecrated. Poles usually have bread, sausages, eggs, salt and horseradish in their baskets. Each product has its own meaning. On Easter Sunday morning, everyone goes to mass, and after that they sit down to have breakfast with the family. As at Christmas, the ceremony of breaking the sacred testicle takes place at the table.

Next, the festivities begin. The Poles are very fond of the game of “cue balls”, or the fight with colored eggs for elimination. Whose egg is the strongest of all, next year will be lucky. In Polish culture, Easter eggs are associated with the custom of giving gifts from the Easter Bunny. Children really like it, because in addition to surprises, like on St. Nicholas Day, the kids organize a “hunt” for a hare that can hide eggs in a variety of places. Whoever finds the most Easter eggs wins.

It is also interesting to celebrate in Poland the second day of Easter, which is called Smigus-dyngus, or “wet Monday”. Children gather in groups and go from house to house. The hosts lightly beat them with a consecrated palemka and give them sweet treats. At general festivities, all people arrange comic fights with water, so no one leaves there dry. This fun tradition often ends with a big surprise for the Poles: at any moment, a “water bomb” thrown by some merry fellow from the window can explode under their feet.

No one is upset about this and even glad, since staying dry is considered a bad omen: next year may be problematic in health and income. If you still don’t want to get wet, then you can pay off with sweets.

Family is the basis of Polish culture. At each holiday, all relatives gather, special attention is paid to the elderly. Women are considered to be the guardians of the family hearth by seniority in the house. Men provide for their loved ones, but they do not have a dominant position in society. 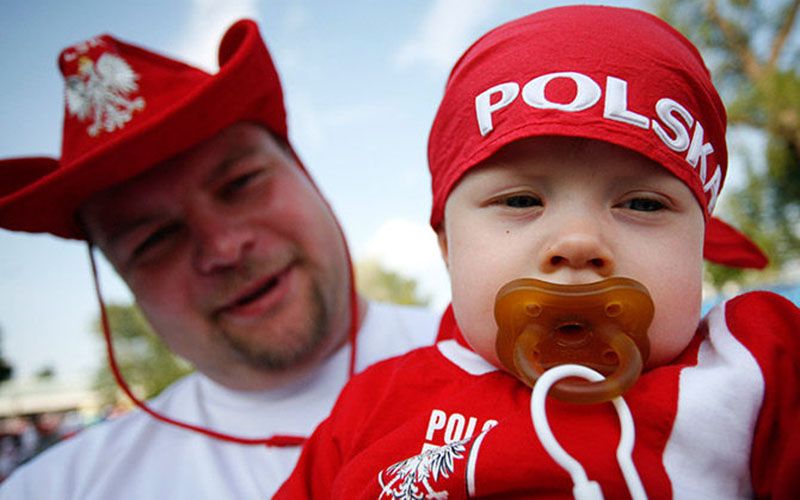 Children are usually raised by their grandparents. Babies in this country are considered the center of society. In the yards of apartment buildings, playgrounds are being equipped for them, nurseries and kindergartens are being built. In Poland, it is impossible to imagine “children’s rest areas”, as is customary in England, for example.

The name of the child is chosen by the whole family, the wishes of the older generation must be taken into account. The name in Poland is given double: the first is secular, the second at baptism. The surname passes from the father. But in marriage, the wife may not change her surname, but she must add it to her own. Each family carefully preserves its pedigree, be sure to collect photographs of ancestors and stories about them.

Like all Slavic peoples, the Poles begin preparations for the wedding with matchmaking. Nowadays, this is more a tribute to traditions, but in the past, preliminary agreements between the families of future young people were a very significant event. Considering that the majority of the population in Poland used to live in villages, the elder of the settlement was the matchmaker. He went to the girl’s house and put a bottle of vodka on the table for the owners. If the future bride agreed to the proposal, she would take out a glass to the guest and he would drink with her parents for the acquaintance. If she refused, then the headman left without drinking from the glass.

Further, before the wedding, the young arrange hen and stag parties. Today is a fun gathering with friends. In the past, such an event was sad for the girl, as she said goodbye to a carefree life under the care of her parents. 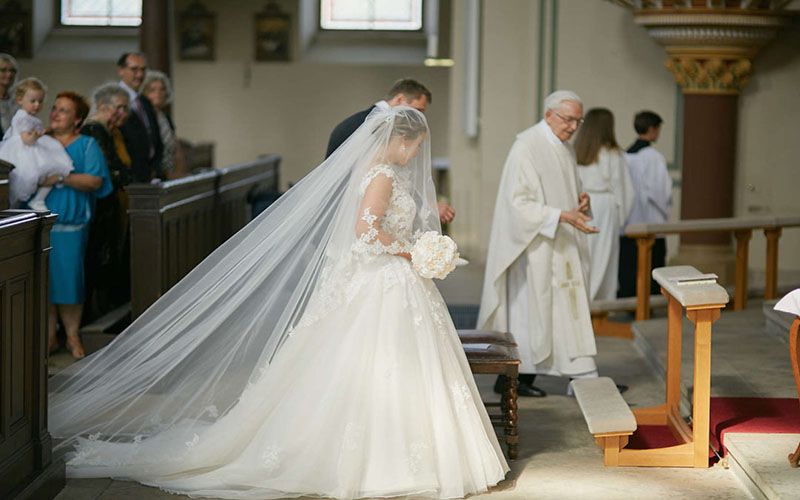 Religious Poles adhere to the rule of marriage through a wedding in a church. At this ceremony, the marriage oath is proclaimed, which is considered inviolable. Next comes the celebration itself. Today, the scale of the celebration is determined by the young themselves, usually these are dinners with loved ones in a restaurant. Previously, the wedding was a mass celebration: they tried to invite as many guests as possible to the celebration.

On the table of the young there was always a loaf – yeast-free bread, decorated with green tree branches and dough birds, which symbolizes the wish for happiness in family life. To this day in Poland, the custom of blessing the newlyweds by their parents has been preserved. First, the groom comes to the bride’s house, gives her a bouquet, and the girl gives him a boutonniere in return. Only after that, parents or close blood relatives bless the couple with a cross dipped in consecrated water.

Modern traditions are already more familiar and are found in many cultures: 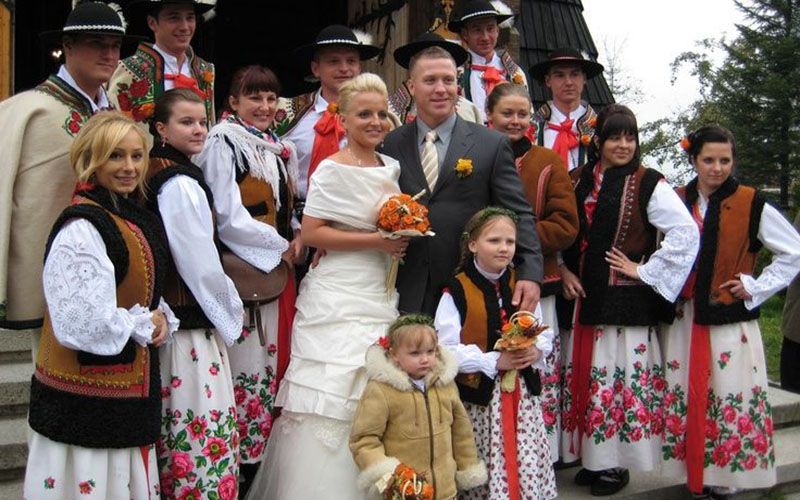 Polish weddings usually take two days. This is the time of games, contests, songs and dances. The first of them is called ochepins, or the transition of a girl to a new status and a new family. The second is the corrections, which are no less noisy.