The U.S. economy fell an unprecedented 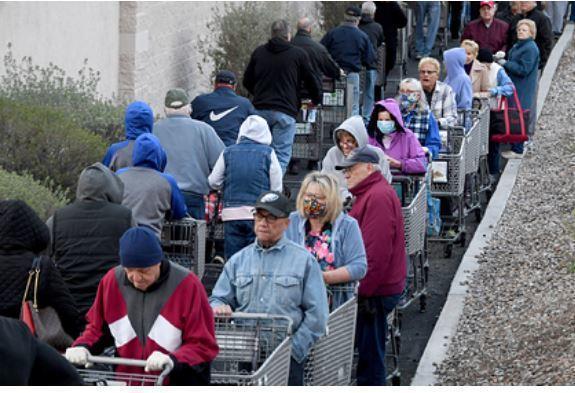 The fall in US GDP in the second quarter was 32.9 percent compared to the same period last year. These preliminary data published by the U.S. Department of Commerce.

For the U.S. economy, the drop was unprecedented since records started, i.e., since 1947. The previous record recorded in the second quarter of 1958, but then the decline in GDP amounted to only ten percent.

Growth hit reduced spending by consumers and companies, which suffered from the pandemic coronavirus. In the first quarter, when the epidemic was still not significant, the reduction was five percent.

According to estimates of the chief economist at Wrightson ICAP Lou Crandall, real GDP for the half-year fell by 11 percent. Thus, the five-year growth of the us economy is completely zeroed, the country would be in a situation 2014.

Senior international economist with ING, James Knightley noticed that similarly, the US GDP fell at the end of the Second world war, but then the decline lasted for three years, and now the path is traversed in three quarters.

On the eve of the Federal reserve system (FRS) the USA has kept the base rate at level of 0-0,25 percent. The regulator explained that they intend to maintain that level until, until it becomes clear that the worst times have gone and the economy on the path to stability.

Also, the fed will continue buying bonds and securities, secured by mortgage on real estate. Each month on these goals will take at least $ 120 billion. The Minister Powell promised to use all the tools to overcome the maximum decline. The problems faced by the economy, he called the most difficult in the entire life of the current generation.

According to the head of the fed, much depends on the situation with the spread of the virus, which in recent month seems to be discouraging. Economists were not prepared for the strengthening of the epidemic in the summer that jeopardized the resumption of production. Pressure tested reversed such sectors as catering and travel.

- Gregory Daco
Fellow at the Oxford Institute for economic policy

We are talking about a new package of priority measures, which are estimated at a trillion dollars. Earlier, the White house reported on the progress in fundamental agreement with the Senate about it, but the debate still continues. In particular, a number of Republicans are not satisfied with the current unemployment benefits in the amount of 600 dollars a week, they insist that payments are reduced three times, to $ 200. From spring to the aid of people and businesses already spent three trillion dollars.

If Republicans and Democrats still do not agree, then the economy is waiting for another decline, that is, the so-called double dip, warned chief economist at Moody's Analytics mark Zandi.

Meanwhile, economists are already starting to discuss long-term problems that would result from such an economic policy of the authorities. In particular, Goldman Sachs warned — excessive activity of the fed may lead to explosive inflation of the dollar, and the volatility of the currency will be deprived of the status of the main reserve. In June the former head of Morgan Stanley Asia, Yale University Professor Stephen roach predicted that in 2021, the dollar will depreciate by one third of the accumulated problems of the American economy.