The townspeople are relieved to learn that the scary killer doll is a child in disguise.

Kendra Walden from Pinson (Alabama, USA) admitted that she almost had a heart attack when she noticed Chucky, a killer doll from famous horror films, walking on the street. 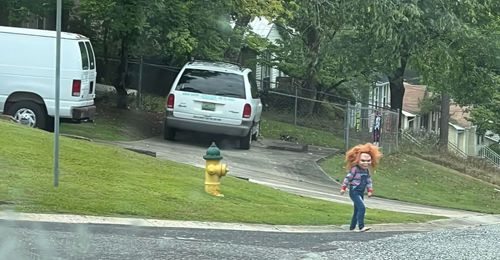 Other townspeople also experienced not the most pleasant emotions when they saw that the doll from horror films leaked into the real world. And possibly with bad intentions. However, Chucky’s mystery was solved, which caused everyone’s relief. It turns out that little Jackson Reed is behind the prank that initially frightened everyone. The young eccentric loves to dress up in old Halloween costumes and walk around in this form.

The panic around the sinister doll turned into laughter over the mischievous boy. However, the Jackson-Chucky story could be taken to the next level. The child has become so famous in his hometown that some people want to invite him to their children’s birthday parties. Perhaps this is the start of a career?

Mother, whose son spilled milk on the carpet, was advised to use soda