There are many interesting and intelligent animals on our planet. Biologists have been studying their behavior for a long time in order to find out who has the highest level of intelligence.

They are close "relatives" of a person and the smartest after him. In many situations, these monkeys act exactly like humans. For example, they are real leaders in the use of tools. In the southeastern part of Senegal, studies were carried out, during which it was noted that chimpanzees repeatedly used different types of tools (sticks, stone hammers, and others) in order to dig up termites. 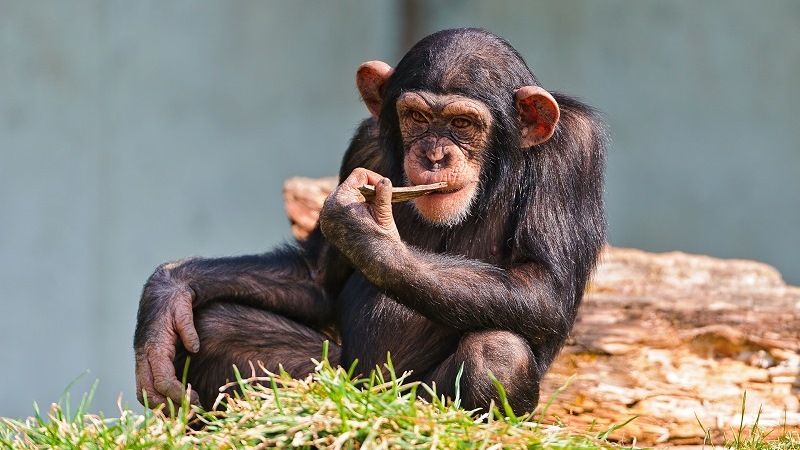 Also, great apes made and used half-meter spears. When making them, they showed ingenuity ─ stripped off the bark, cleared the branches of leaves. The most amazing thing is that they could even sharpen the tips of the tools with their teeth. Anthropological studies conducted in 2005 indicate that spears were needed for chimpanzees to hunt.

In 2007, a test was conducted to determine the cognitive ability of chimpanzees and humans. The task was as follows - to memorize the location of the numbers on the touch screen and reproduce the picture from memory. The number of errors among monkeys and humans turned out to be about the same. Young chimpanzees performed best on the test. They have an outstanding photographic memory, allowing them to memorize images with high precision.

These are some of the smartest creatures on the planet with complex behaviors. They appeared tens of millions of years ago. There is even a hypothesis that dolphins are smarter than humans. They have convolutions in their brains, just like humans. 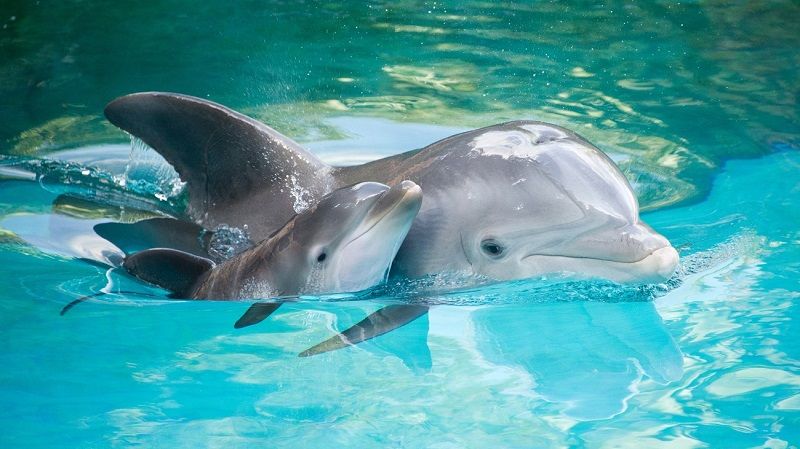 Dolphins are distinguished by their sociality and awareness. The flock has a complex structure that consists of individuals who are able to cooperate to achieve certain goals (obtaining food, solving problems). They communicate with each other using ultrasonic signals-words. They even found mathematical patterns in their speech. They can quickly assess the situation and adapt to it.

Dolphins are often accompanied by various attractions in dolphinariums. It was noted that they not only successfully cope with the execution of commands, but also approach the process from the creative side - they invent their own tricks with hoops, balls and other objects. To learn the command, these creatures take even less time than dogs.

In wartime, the dolphins were used as saboteurs by British intelligence.

Females show mindfulness when raising offspring. They bring up their children for many years, passing on their experience.

They are able to memorize sounds, they can distinguish their fellows by whistling. Another unique feature is the talent for onomatopoeia. It is very similar to imitate the twittering of birds, human laughter.

The dolphin's brain never sleeps. The left and right hemispheres take turns resting. This is necessary in order to periodically float to the surface for breathing and to avoid danger.

Animals are distinguished by strong social bonds and high culture. Females have been raising children for many years, teaching them skills for survival in the forest. By the age of ten, orangutans have identified over two hundred different edible plants. They know how to imitate human actions, use tools. They are able to saw wood, fasten individual parts with nails and a hammer. Perfectly imitate the behavior of congeners, adopt various skills from each other. 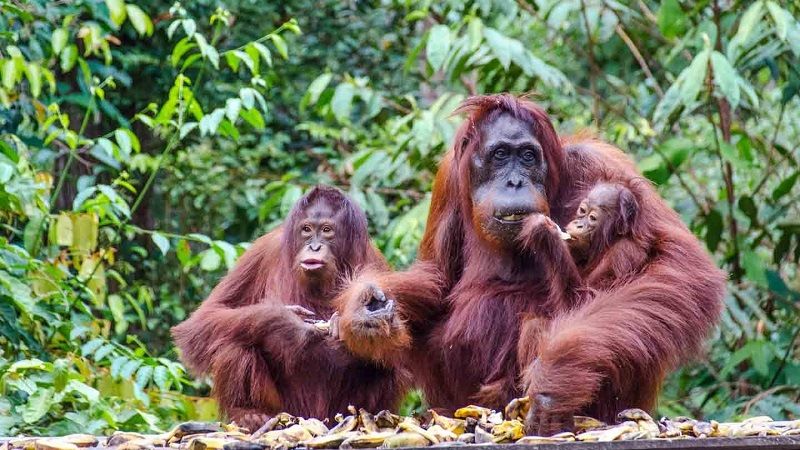 The giant representatives of the animal world are the largest mammals on the planet. They have an excellent memory. The great Aristotle said that elephants are significantly superior to others in wit and intelligence. They are able to remember the person who treated him well or badly. History has recorded cases when an elephant could take revenge on the owner for some insult or even kill.

They demonstrate emotions perfectly. They are very caring for the members of their group and even for other living beings. They know how to call each other for help. 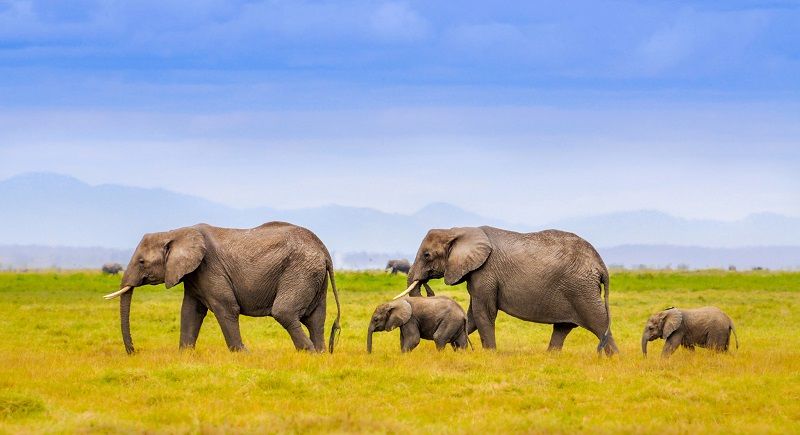 They have funeral rituals. Animals honor dead relatives, cover them with leaves.

In one study, elephants were found to understand the difference between languages. They know how to hold a stick with their trunk and draw on the ground. In Africa and India, they sell drawings made by elephants.

Everyone is used to thinking of pigs as unclean and gluttonous creatures. But in fact, this is not true. They are among the ten smartest animals on the planet. They have high intelligence and the ability to adapt to a wide variety of external circumstances.

Are prone to stressful situations. For example, little piglets are very attached to their mother. Parting with her is extremely painful: they lose weight a lot, eat poorly. The greatest stress is moving. In general, the pig is considered an extremely nervous animal.

Teachable, there is the ability to understand the desires of other beings. They respond to their name already at the age of one week. Feel the time, the approach of feeding is determined with an accuracy of one minute. 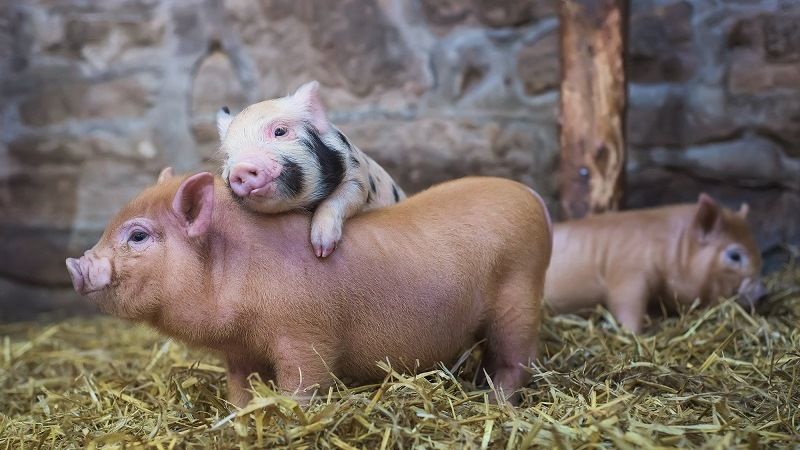 They have a fantastic sense of smell. People began to use this ability for practical purposes, they came up with the idea of ​​training pigs to search for truffles.

There is a statement that the intelligence of a pig corresponds to that of a child of three years.

They are found in all corners of the globe. This biological species has been living next to humans for several centuries. The size of the brain of nimble animals with a large pea. Despite this, numerous studies have confirmed that they have outstanding intelligence, phenomenal memory and ability to analyze. In addition, they are excellently oriented in space.

A characteristic distinguishing feature is the ability to make stocks of nuts for the winter. They do a tremendous job - they hide the nuts in the hollow, bury them in the ground. A good memory allows you to remember all the locations of supplies. And there are often more than a thousand of them. Squirrels communicate with each other, exchange information about food supplies and dangers. 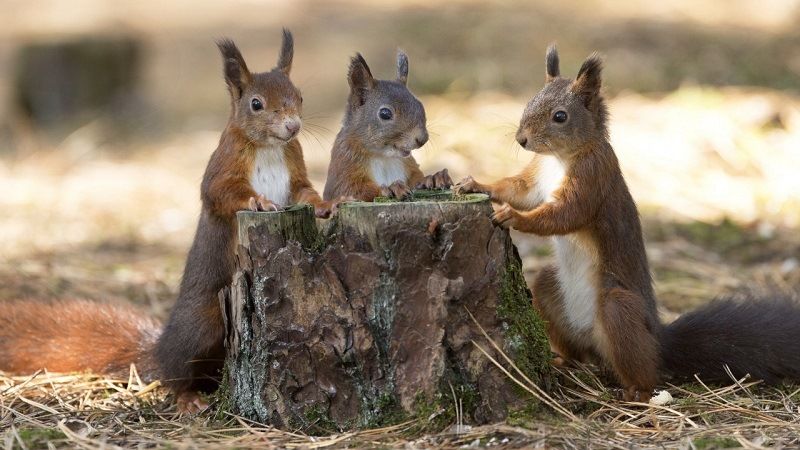 Very cunning. Having noticed a potential threat, they can pretend that they are hiding prey in one place, and then hide it. It is these abilities that provide proteins with good survival in the wild. Tamed animals quickly remember their nicknames and respond to them.

In the famous tale of Alexei Tolstoy, the tortoise Tortilla is a real personification of wisdom. Modern research confirms that turtles really have remarkable intelligence. They can be trained to find exits from intricate mazes. They are able to easily adopt the skills of their relatives. Some owners claim that their turtles know their name.

It has long been scientifically proven that dogs have high intelligence. Sometimes it seems that they literally literally understand their masters. The average dog has the intelligence of a two year old. Animals lend themselves to training, remember a large number of commands. Dogs have a strong sense of justice. Obedient and loyal to their masters, they easily adapt among people. In representatives of different breeds, the level of intelligence is different. The smartest are German Shepherds, Poodles, Borders, Golden Retrievers and Labradors. 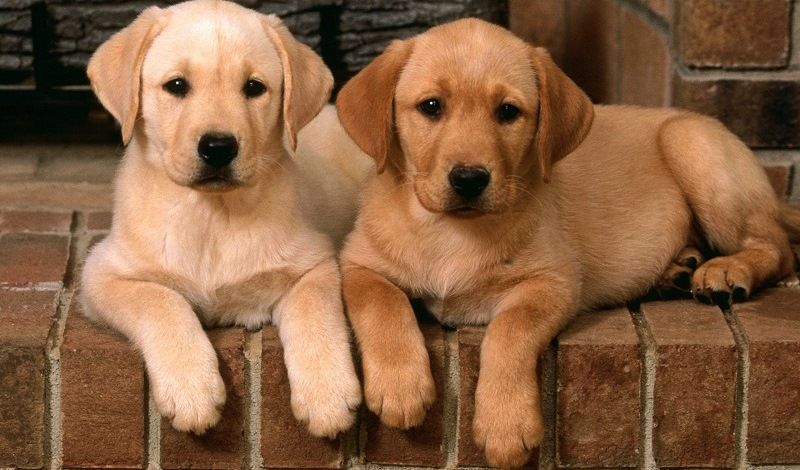 These are real intellectuals who have endless abilities. That is why, they have a phenomenal survival rate over many millennia. Small rodents inhabit all continents, with the exception of Antarctica. The rat genome resembles the human genome. Perhaps that is why they have such developed mental abilities. They perfectly remember the area, develop optimal routes to their homes and food storage sites. It's like navigation maps are inserted into their brains. A clear hierarchy is observed among themselves. They have a leader and subordinates in the pack. For the sake of the members of the pack, they can sacrifice themselves. The leader appoints "scouts" and they go in search of food. When falling into traps, the rest of the rats receive an alarm signal. The latter immediately adopt the negative experience of their predecessors. The second time on the same rake, these cunning animals will never step.

They live and thrive in almost any environment. They know how to crawl into the smallest holes, they are able to climb almost any surface. Can master the most intricate mazes in just a few runs. 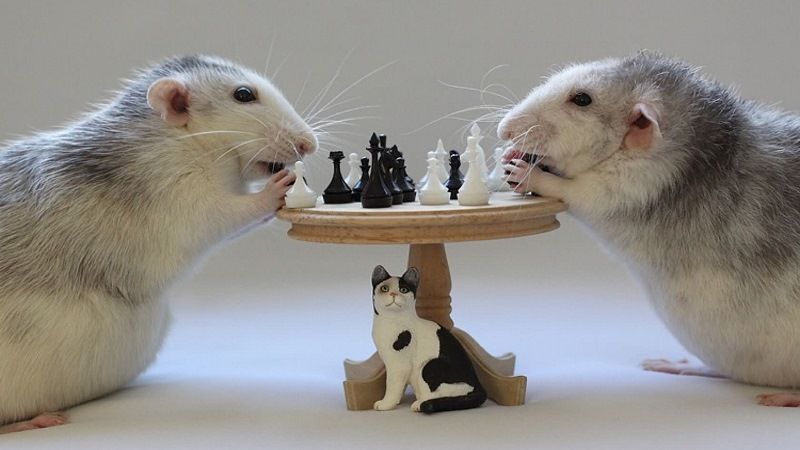 Despite a good memory, they tend to quickly forget many things. Scientists have concluded that their memory capacity is limited. They remember only the essentials for survival at the moment.

These animals have a rich vocabulary. Although they are not characterized by speech in the usual sense of the word, they communicate in a certain ultrasonic range.

Decorative rats are easily trainable. They are taught to climb a ladder, motivated by the fact that they put a delicacy on the top shelf. The animals not only climb the ladder, but even drag it along to climb even higher.

Almost no one doubts the presence of intelligence in cats. Fluffy animals are cautious and prudent. They are champions in curiosity and observation. Selectively perceive incoming information. Are smart in areas that are of interest to them. This fact is definitely a manifestation of the practical mind. They know how to manipulate people, adapt to the behavior of the owners. They often come to feel sorry for a person if he is in a bad mood. 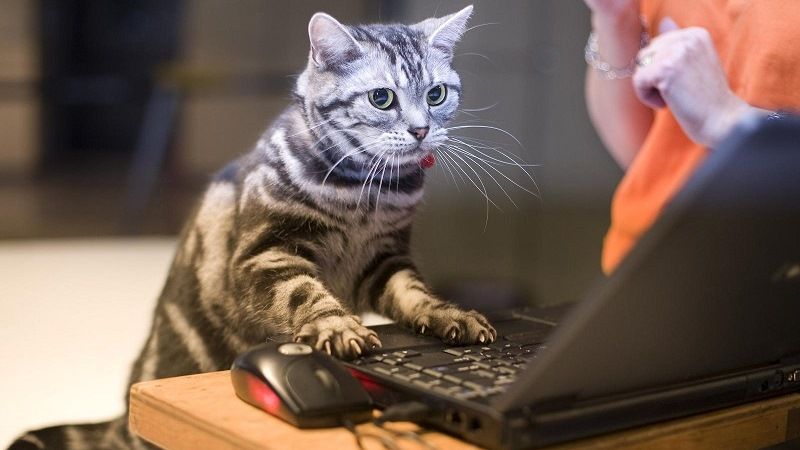 They have a great memory. Memorize words and people who have treated them well or badly. They have the ability to develop and consolidate conditioned reflexes. The most trained are Arabian horses.

The most outstanding horse of all time, Clever Hans, belonged to Wilhelm von Austin. He developed her mathematical abilities. Hans knew how to add and divide numbers (whole and fractional). The animal responded with a hoof. In addition, the horse possessed outstanding linguistic abilities — he understood speech in English, French and German. 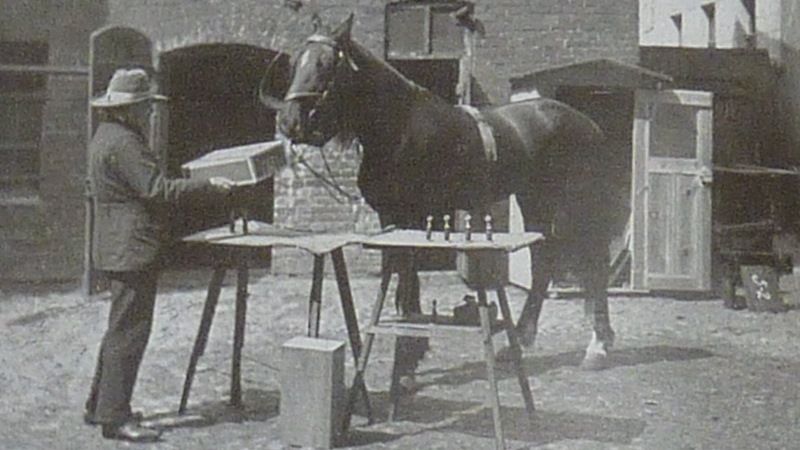 There is a stereotype that a sheep is one of the stupidest creatures in the world. But in fact, these are intelligent animals, distinguished by their ingenuity and insight. They are able to emotionally react to what is happening around them, they can respond to their nicknames. Some tests show surprising results. Sheep distinguish between geometric shapes and colors, are able to quickly adapt to circumstances, remember information. They recognize their owners and distinguish each individual in their herd. They know how to be friends, stand up for each other. They have a good spatial memory, they easily find their way home, even if they graze in a new place each time.

There are many smart animals, but there is no single criterion for assessing intellectual abilities. Some have a good memory, others are quick-witted, and still others have other advantages.