The Secret of the Marinka Tower

The life of Marina Mnishek has always been surrounded by rumors, speculation and legends.

A beautiful adventurer who threw everything on the altar of her own ambition and ambition, who lost and paid for her mistakes at the highest price – the captivity and death of her son. She left behind many secrets and mysteries.

Brought up from childhood in the awareness of her noble origin, the daughter of the Polish governor was firmly convinced that in time she would definitely marry not just anyone, but the sovereign prince of all Russia.

But fate laughed cruelly at her. On her way she met Grishka Otrepiev. The fugitive novice of the monastery was hiding from his pursuers in Poland. Having proclaimed himself miraculously surviving from the reprisals of the Godunovs, Tsarevich Dmitry, he quickly became close to the governor Mniszek and enlisted his support. Marina, assessing the situation, immediately married the newly-born heir to the Russian throne and accompanied her husband on a campaign against Moscow. Shortly after False Dmitry I,

supported by the opponents of Boris Godunov, came to power, Marina Mnishek was crowned king.

But the Polish lady reigned for only a week. After a conspiracy led by Shuisky, Dmitry was brutally murdered. In order not to share the fate of her husband, the widow got away from Moscow.

THE SPELL OF MARINA MNISHEK

Soon, False Dmitry II appears in Russia, and Marina recognizes in him her supposedly saved husband. And the struggle for the Russian throne begins again. However, this impostor is quickly escorted to the next world. Marina has the only way to keep the throne – to put her three-year-old son on it. But for this it is necessary to find another False Dmitry.

Taking treasures with her, she runs south to the Don River. There, the handsome ataman Zarutsky falls in love with her, who also dreams of the Russian throne. However, Zarutsky understands that without Marina he is nobody for the Russian people. But if Mnishek is returned to the throne and her son to reign, then there is something to fight for. Together with the Cossack ataman, Marina approached Kolomna, seized and plundered the city by vile deceit. 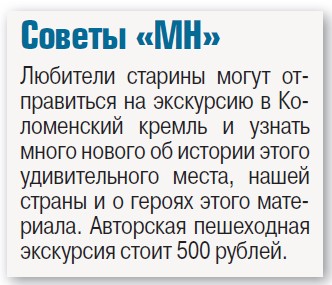 Carrying the stolen treasures with you was difficult and dangerous. Therefore, they decided to bury part of the wealth 25 versts from the city, not far from the village of Bogorodsky. And Marina cast a terrible spell on this burial place.

The version of the buried treasure was carefully and more than once checked by archaeologists. The first excavations in Kolomna were carried out in 1903. And until now, treasure hunters are trying to find these treasures. But for some unknown reason, horrified, the treasure hunters run away from these places.

THE FAT IS IN THE FIRE!

The last days of Marina lived with a sense of impending tragedy. And it didn’t let her down. They were caught in the Urals, on the Yaik River, where they hid along with the Cossacks on Bear Island. In the autumn of 1614, along the same Kashirsky tract, Mnishek was again brought to Kolomna, but already as a prisoner. Marina was imprisoned in the tower, which now bears her name.

In Moscow, after terrible torture, Zarutsky was put on a stake, and her son was hanged. There is a legend that, having learned about the death of the heir, Mnishek cursed the Romanovs and predicted that none of them would die a natural death.

However, there is a legend among the people that Marina Mnishek and her young son Ivan were immured in the same tower. Further versions diverge. One says that she died like that, the second says that the people of Kolomna, indignant at the arbitrariness of a foreigner, threw the impostor from the tower.

In Kolomna, they told me another version of the mysterious disappearance of Marina. Allegedly, False Dmitry II did not die, he bribed the guards and made his way to his imprisoned wife. She revealed to him the secret of the location of the treasure – a true feeling arose between the forced spouses from the very beginning. False Dmitry found the treasure and for most of it, that is, for a lot of money, bought the woman he loved.

THE GHOST OF THE KOLOMENSKOY KREMLIN

Until now, the old tower is notorious. They even called experts. They went around all the corners with frames and came to the conclusion: a powerful energy pillar surrounds the tower. Someone does not believe in all this, but someone comes to be charged with strength …

There are rumors among the people that the treasure was hidden not only in the Startsevsky ford. They say that countless riches are also walled up in the Marinka Tower. And sometimes on dark nights, no, no, yes, and a mysterious light will flash in the tower and burn almost until morning …

It is said that Marinka’s rebellious spirit still haunts the tower. In the morning here you can hear the barely perceptible sound of the heels of women’s shoes. There is a feeling of the presence of a light breath, and the fearless eyes of a beautiful polka burn you through the walls. And then I noticed a strange phenomenon: for some reason, the crows are circling only above the Marinka tower, for some reason they are not interested in other towers. No one could explain this to me…