The most expensive houses

There are many expensive and unusual houses in the modern real estate market in different parts of the world. Many are interested in how much the most expensive of them cost and who owns them.

It may well be called residential real estate, although it is not subject to sale. The cost of the palace is equal to one and a half billion dollars. Its history dates back to the eighteenth century. The building was built in the best traditions of classicism. There are 775 rooms here, of which almost 200 are for service personnel. It takes a lot of people to keep the palace in order. The interior decoration of the premises is striking in its beauty. Each has its own unique finish. For example, there are rooms in the Chinese style. Opposite the main entrance there is a monument to Queen Victoria. The Royal Gardens are full of ponds with waterfalls and magnificent fountains. 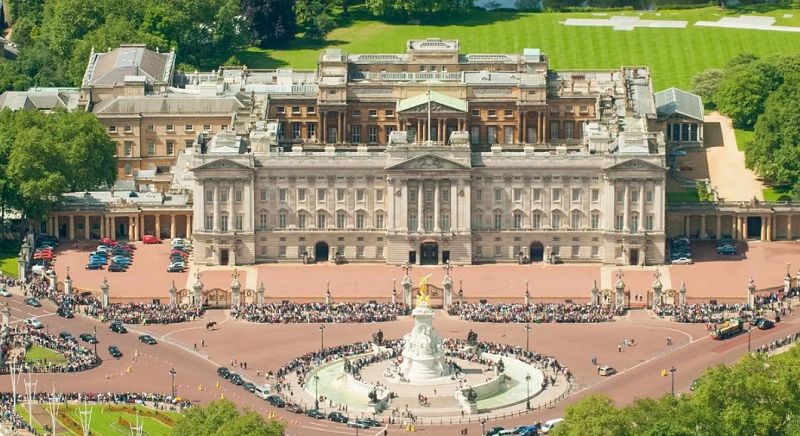 Buckingham Palace is the official residence of Queen Elizabeth, the second and real symbol of Foggy Albion. The palace is regularly visited by tourists from all over the world.

The tall tower in southern Mumbai is owned by Mukesh Ambani. This oil industrialist is one of the richest people in India. He lives here with his family of six. The construction of the facility took almost seven years. The approximate cost of luxury real estate is about a billion dollars. The building was designed entirely by Chicago architects. When building, the principles of eastern vastu science were taken into account. The structure is so strong that it can withstand an eight-point earthquake.

The 27-storey building has a six-level parking lot, three helipads, a car service, swimming pools, and a four-storey garden. Each floor of the building is unique. The number of service personnel is also striking. More than 600 employees work here to maintain order and serve the residents. 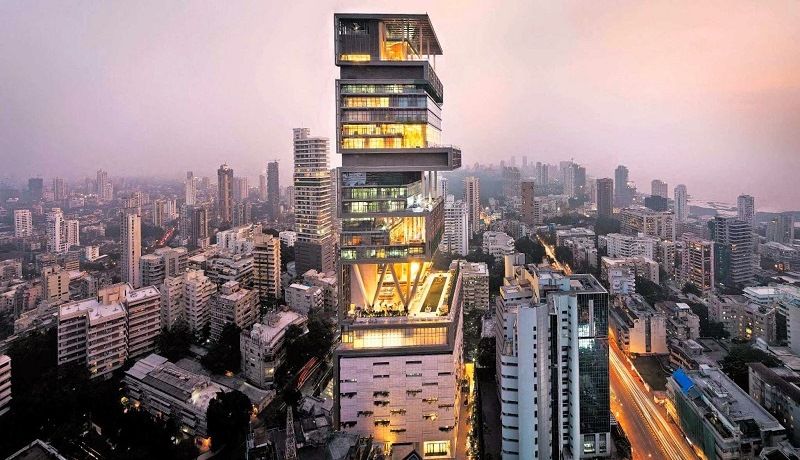 The skyscraper caused a real flurry of negative emotions from the citizens. Indeed, with all his appearance, he shows how great the gap between the rich and the poor is. More than half of Mumbai’s population lives in poverty.

The area of ​​the estate is over three thousand square meters. It was built in California for millionaire Michael Milekne. The house resembles a palace from the era of Louis fourteenth. A feature of the building is the presence of a wine cellar. In addition, the mansion is equipped with a beautiful ballroom and an impressive library. The approximate cost of the facility is $ 760 million. 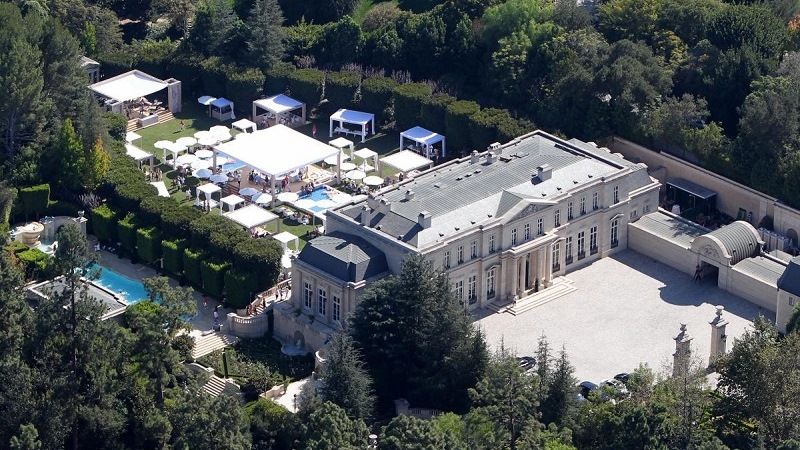 What is the most expensive house? This is an object erected on the shores of Lake Zug in the picturesque foothills of the Alps. It took five years to build this building, and it took a fantastic amount of $ 12.2 billion. Although its dimensions are relatively small, the total area is about 725 square meters. There is no information in the public domain about the owner of the property, he chose to remain in the shadows. It is rumored that this is a Swiss citizen. More than two hundred kilograms of jewelry were used for finishing. The most unusual detail is the bar counter made of meteorite. This is the idea of ​​architects Steward Hughes and Kevin Huber. Space material is very expensive. There is a view terrace with a swimming pool and a garage for 4 cars. 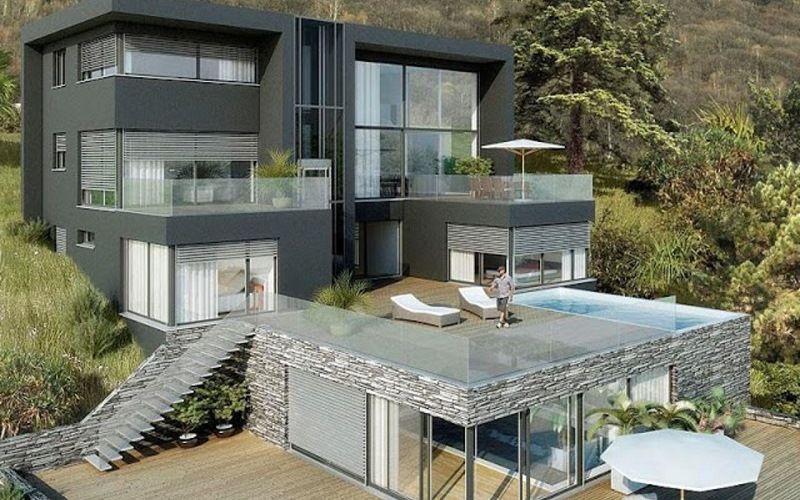 The huge estate is located in France. Previously, the owner was the famous King of Belgium Leopold II. He bought property on the French Riviera for his favorite. Now the owner of the villa is the Brazilian millionaire Lily Safra. She inherited the estate from her deceased husband. The building is faced with the rarest kind of marble. The villa occupies a huge area and requires a lot of maintenance. For example, 50 gardeners work here to maintain the park.

It is known that the Russian oligarch Mikhail Prokhorov has repeatedly wanted to buy the Villa Leopolda, he really liked it. But he never got the deal done. 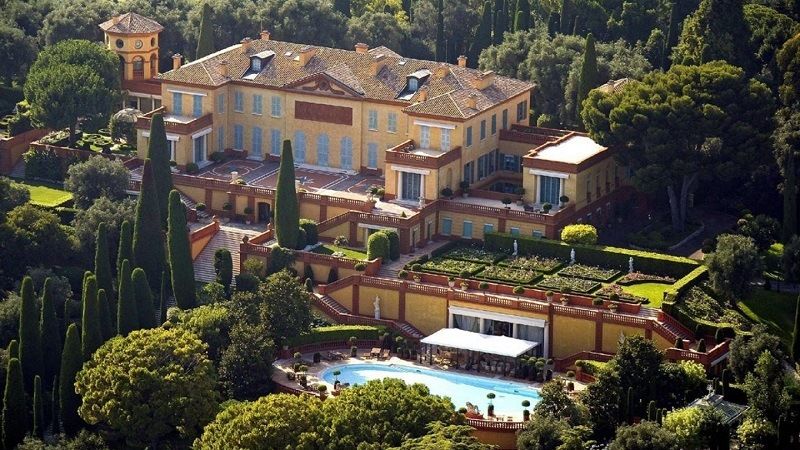 Located in the French city of Toul, near Cannes. This is a true masterpiece of modern architecture. House area – 1200 square meters. Its construction began in the 70s of the twentieth century. The customer was a wealthy industrialist Pierre Bernard, who died before the palace was completed. In 1989, the object was bought by the famous fashion designer Pierre Cardin.

The structure of the building is quite bizarre – wavy spherical structures resembling soap bubbles. There are oval lanterns on the roof; inside you can see spherical sofas and armchairs. The windows offer a beautiful view of the Mediterranean. There is even an open-air amphitheater for five hundred people. It was in the Palace of Bubbles that the show of the fashion house Dior and many other social events were held. 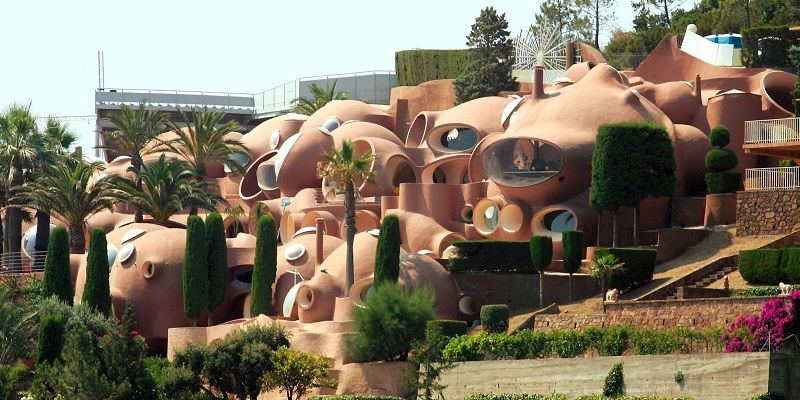 The estate is located in California. The Manor was built in the style of a French chateau and includes 123 rooms. The first owner is the popular producer and director Aaron Spelling, who died of a stroke in 2006 on the estate. The house is now owned by the daughter of the Formula One boss.

Acquisition of real estate on the French Riviera has become commonplace for wealthy people. But things were different in the past. In the early nineteenth century, the Cedar Villa was just a working farm that produced olive oil. The oil press in the courtyard has now been replaced with a bronze statue of the goddess Athena. Paths lead to the imposing building under the shade of cedars and palm trees. Inside the house, you can see Empire-style furniture, numerous portraits and candelabra. The cost of the Cedar Villa is over 400 thousand dollars. 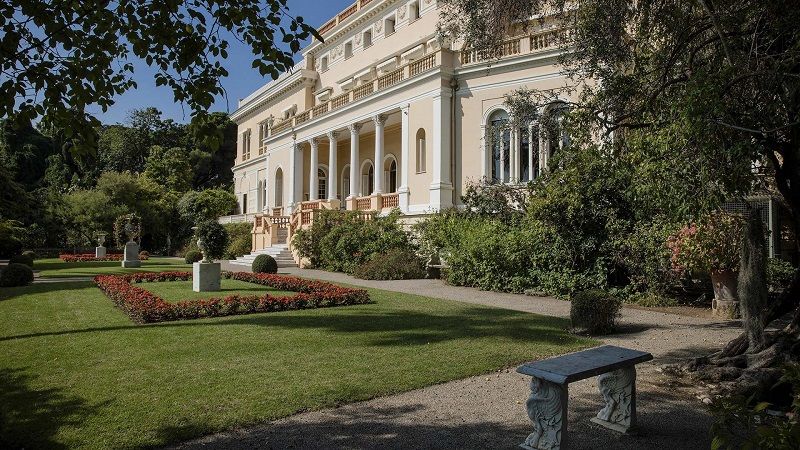 This is a project by architect Sumner Spoulding. He used seventeenth-century French architecture as inspiration. The house in white and gray tones is faced with limestone. There is a giant swimming pool and parking nearby.

It was here that one of the most popular television shows, The Beverly Hillbillies, was filmed. The building was later bought by the head of the television company, who spent millions on modernizing and restoring Chartwell. It is thanks to him that the estate has been perfectly preserved to this day. 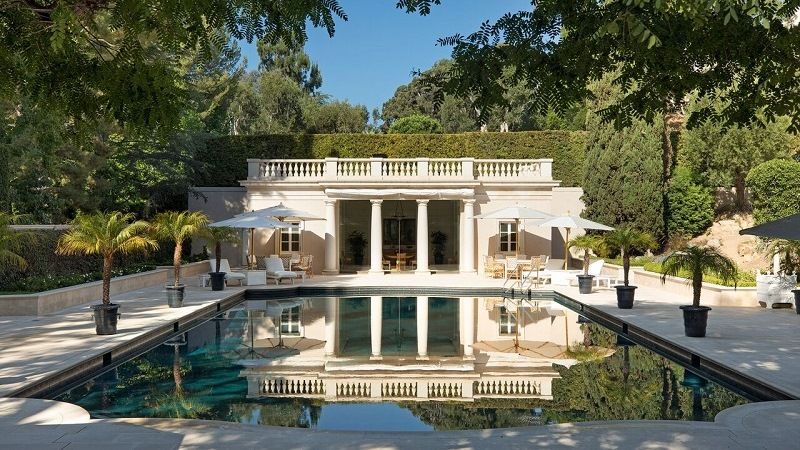 In the English village of Windlesham, there is a local attraction, the Updown Court mansion. At first, Sir Philip Ward owned it, but after his death, the house was bought by a prince from Egypt. The mansion has more than a hundred rooms and a garage for eight limousines. The approximate value of the property is $ 138 million.

The height of the skyscraper is 170 meters. This is the tallest building in the Principality of Monaco. The area of ​​the apartment is 3, 3 thousand square meters. The creator of the penthouse decided to be creative, the walls of the apartment on each floor are one continuous window. This allows you to enjoy the panorama from anywhere in the apartment. The most impressive feature of the penthouse is the sea-view waterslide that ends in the outdoor pool. 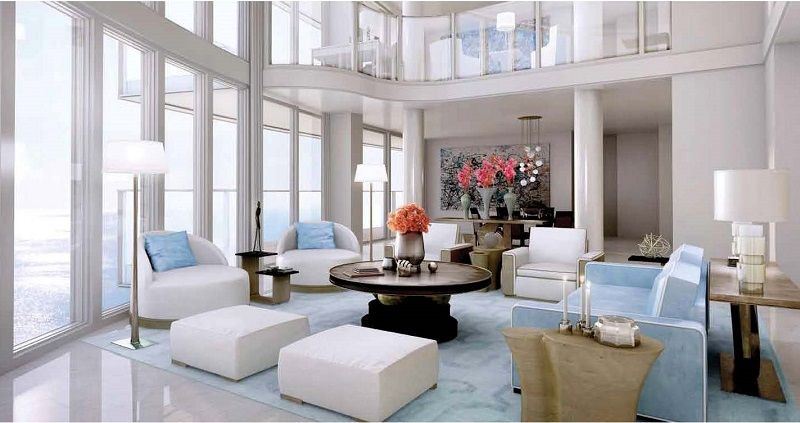 Located in New York on Long Island. The giant palace is worth almost $ 250 million. The owner is the industrial magnate and investor Ira Rene. The house has three swimming pools, a synagogue, 39 baths and 29 bedrooms.

This ranch is owned by Bandara bin Sultan, a former ambassador to Saudi Arabia. A beautiful large home located in Aspen, in the western United States. Now the owner of the real estate does not live there, because he was forced to return to his native country. It is almost impossible to get to the property, because it is protected by a complex security system. The object is put up for sale, but no one has been buying it for a long time. Which is not surprising given the huge price tag. There are many coniferous trees and grassy hills nearby. It has its own car wash, gas pumps and a water treatment plant.

There are stables, golf courses, waterfalls on the territory. The inside of the house is finished with mahogany. Numerous bedrooms are thematically furnished. The living rooms are decorated with rare Arabic rugs. Hala combines the richness, luxury and sophistication of an oriental style. The ranch is now valued at $ 821 million. 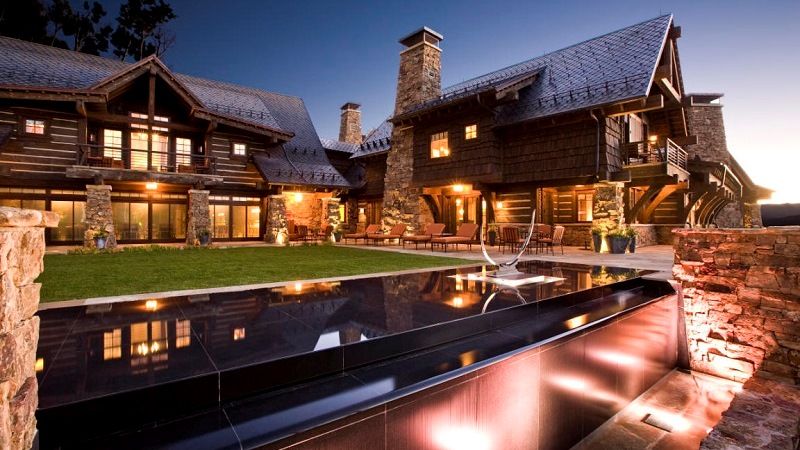 Location – UK, Upper Phillimore Gardens, London. This Victorian building was originally supposed to be a girls’ school. However, at the moment it is a private property. The estate now belongs to Elena Pinchuk, daughter of the former president of Ukraine. She bought the villa in 2008. At that time, this facility was considered one of the most expensive in the UK. Estimated cost — $ 161 million.

Location – London Hyde Park. The penthouse was bought by the Ukrainian billionaire Rinat Akhmetov. The facility was designed by designers Christian and Nick Candy. The apartment has a huge pool, golf simulator and wine cellar.

Located in Montana, USA. Located right on the side of the mountain. It is a major property of the Yellowstone Club. The owners are “Forest Baron” Tim Blixet and his wife. The large house has a wine cellar, underfloor heating (even by the roads). The main feature is the availability of an individual chair lift to the ski resort. The cost of one of the most expensive properties is about $ 950 million.

It is owned by the newspaper publisher and media mogul William Randall Hirst. Located in California, on the Pacific coast. The building was designed by Julia Morgan. It is now a Historic House Museum and California National Park.

There are still many expensive and luxurious houses in the world that amaze the imagination with their design and amenities. The only drawback is the high cost of such real estate. Only a few have the opportunity to purchase luxury housing.