The most amazing mountains in the world

Mountains occupy about a quarter of the planet Earth’s surface and even have their own holiday, which is celebrated on December 11. They have different heights and relief forms, but some of them amaze the imagination with bizarre shapes or spectacular appearance. We offer a selection of the most amazing mountains in the world. Each of them is unique in its own way, sometimes it is even difficult to believe that they are the work of nature.

In the west of Australia, in the Coyote Butts National Park, there is an amazing rock formation, which has the shape of a beautiful frozen wave. Despite its rather modest size (the height of the mountain is 15 m, the length is 110 m), this place has always attracted the attention of people from all over the world. Scientists believe that the mountain was formed 27 million years ago from compressed multi-colored sandstone, and wind and precipitation gave it an unusual wavy shape with color transitions. 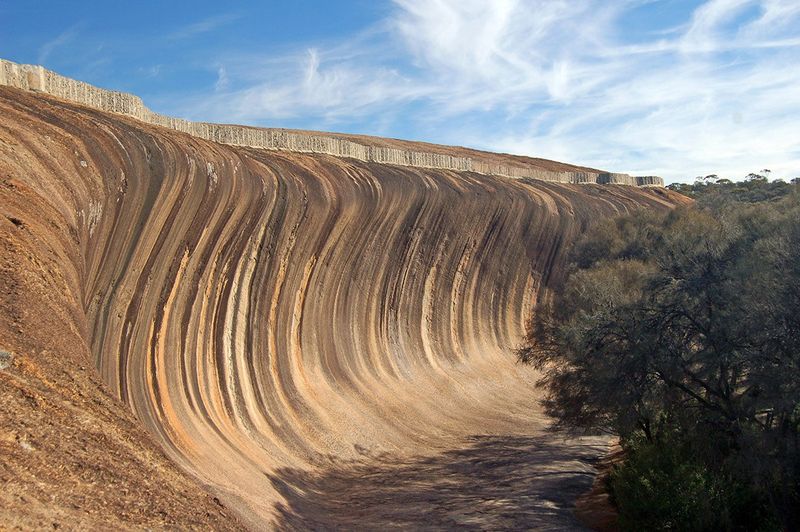 The incredible resemblance of the Stone Wave to a real tsunami was noticed by the Australian aborigines and believed that the forces of spirits were combined with the forces of nature here.

In the province of Gansu (China) there are amazing colored mountains, which tourists from all over the world come to admire. This unique local landmark, also known as the Pink Cloud, began to form millions of years ago, when large masses of sandstone and other minerals accumulated here. Over time, exposure to water and air led to their slow oxidation, as a result of which today you can observe a riot of colors created by nature itself. The mountain slopes shimmer with lemon, burgundy, terracotta, blue and green hues. 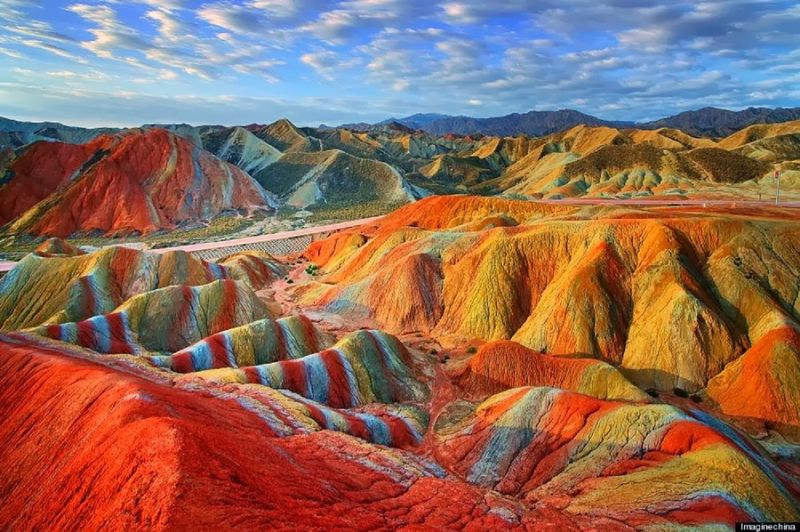 Denxia is included in the UNESCO World Heritage List and everyone can visit this unusual place.

Amazing mountains can be seen in Russia as well. In the Komi Republic there is such an unusual formation, which is included in the list of the Seven Wonders of Russia. In its place, more than 200 million years ago, high mountain peaks stretched, which were gradually destroyed by winds and precipitation, leaving only a few vertical pillars of bizarre outlines to this day. Especially striking is the fact that, despite the narrower bases in comparison with the tops, they have stood for several millennia and have not collapsed. It is not surprising that the Mansi worshiped grandiose stone sculptures in the past, but climbing them was considered a great sin. 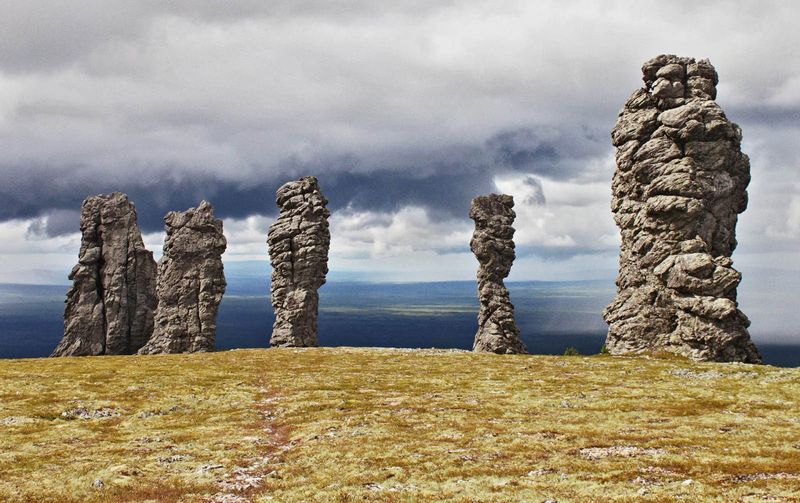 To get to this miracle of nature today, tourists must first issue a pass to the Pechora-Ilychsky Reserve, and then overcome a rather difficult route.

Unique mountains resembling a stone forest are located on the territory of the national park of the same name on about. Madagascar. They are stone needles 30-50 m high, from which impassable labyrinths are formed. Most of them are formed from limestone: millions of years ago, deep underground, narrow and deep karst caves appeared, and later water and erosion eroded chalk and limestone layers for centuries, creating amazing mountains that have no analogues in the whole world. 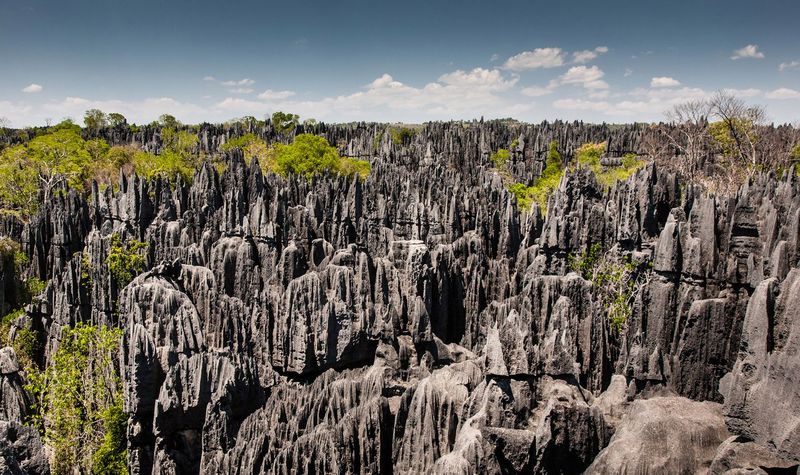 Kailash is one of the peaks in the western part of the Tibetan Plateau, which once rose from the bottom of the ocean, and then the winds with water sharpened its edges, forming a unique pyramid shape.

It is one of the most amazing and mystical mountains in the world. And that’s why:

Konder is another amazing mountain located on the territory of the Khabarovsk Territory of Russia. Its uniqueness is that it is the only rock formation with an almost perfect round shape, the appearance of which is not associated with the results of volcanic activity.

Konder is considered a sacred place among the Yakuts and Evenks. But, unfortunately, it remains inaccessible for tourists. Firstly, because of the difficult surrounding landscape, and secondly, because of the platinum deposit located here, which is strictly protected by the state.

The renowned Matterhorn is one of Switzerland’s most photographed landmarks. This symbol of the country also became the logo of the world famous triangular chocolate brand Toblerone. The pyramidal mountain has steep slopes, which, together with unpredictable weather conditions, greatly complicates its conquest. But despite this, the famous Swiss mountaineer Ulrich Inderbiden managed to climb to its summit 371 times, and the last climb he made at 90 years old. 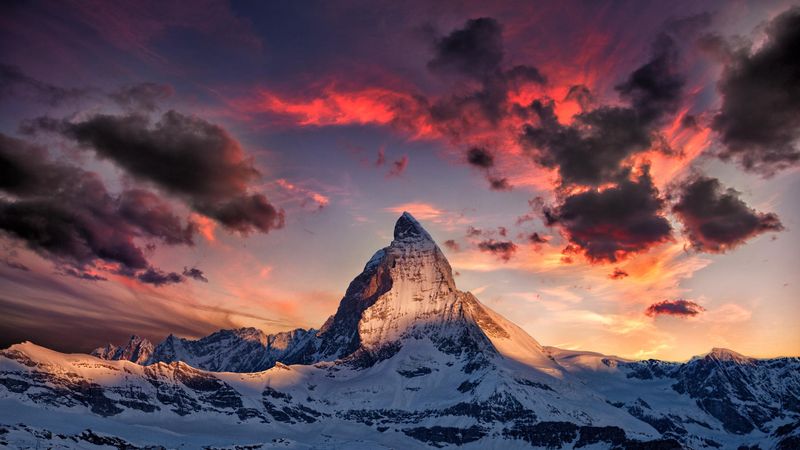 Interesting! On July 14, 1865, people set foot on the top of the Matterhorn for the first time. But every year on this day, climbing the mountain is closed to everyone in memory of the climbers who died on the way to its conquest.

These are not just amazing mountains, but a national park located in the US state of Utah. The first glance at the canyon evokes associations with alien landscapes: vertical formations with pointed tops coexist next to stone pyramids of cosmic forms. According to ancient Indian legends, people who did any bad deeds turned into rocks at this place. 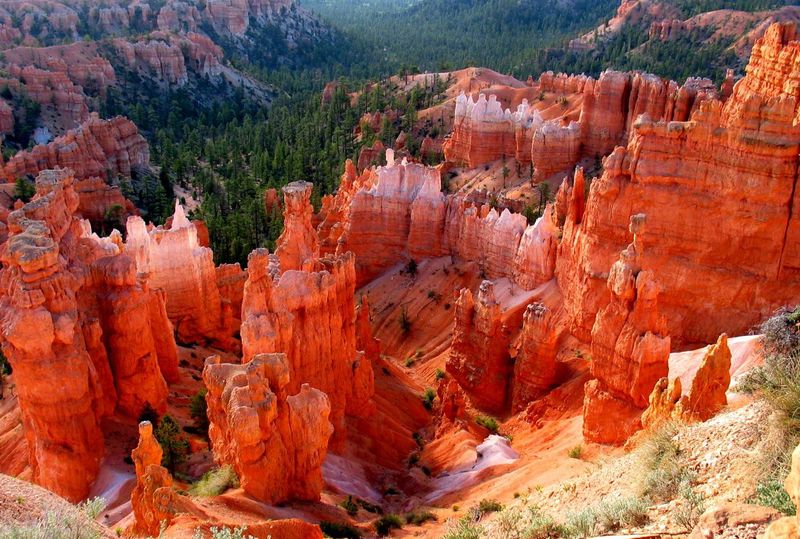 Tourists from all over the world prefer to admire this stone beauty at sunset, when its rays create an unusual play of reflections and shadows. The rocks themselves were formed about 15 million years ago, and then erosion erased a thick layer of sedimentary rocks, leaving fantastic stone pillars. Due to the content of a large amount of trace elements, which are gradually oxidized, they are colored orange, red and white.

Despite its unremarkable appearance, Khoja-Mumin, located in the south of Tajikistan, is rightfully one of the most amazing mountains in the world. It consists almost entirely of salt, the reserves of which, according to geologists, will be enough to meet the needs of all mankind for several centuries. Pale pink, gray and blue-green rock salt appears on its slopes. Only some areas of the surface are covered with a thin layer of soil, which appeared here due to the dust particles carried by the winds. In ancient times, a salty sea was located in this place, which gradually dried up, salt layers were squeezed at its bottom, and then, as a result of tectonic processes, they were raised up, forming Khoja-Mumin. 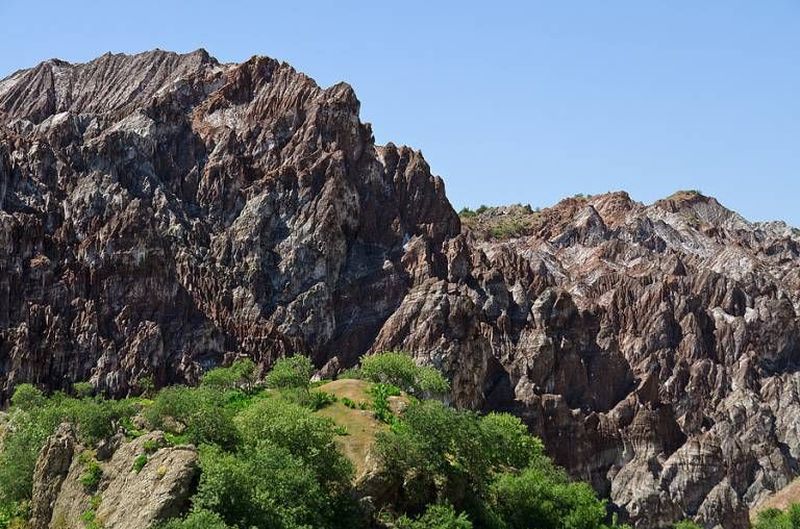 An amazing fact! At the top of the salt mountain, numerous and varied plants grow, freshwater springs gush, and in springtime you can see a whole carpet of red tulips here.

A mountain with a mystical name, located in the northeastern part of Wyoming (USA), is shrouded in no less mystical legends and stories. According to Indian legends, it was created by an evil demon who beat a drum on top of it, spewing lightning and thunder, and in the XX century. it was called the UFO landing site. 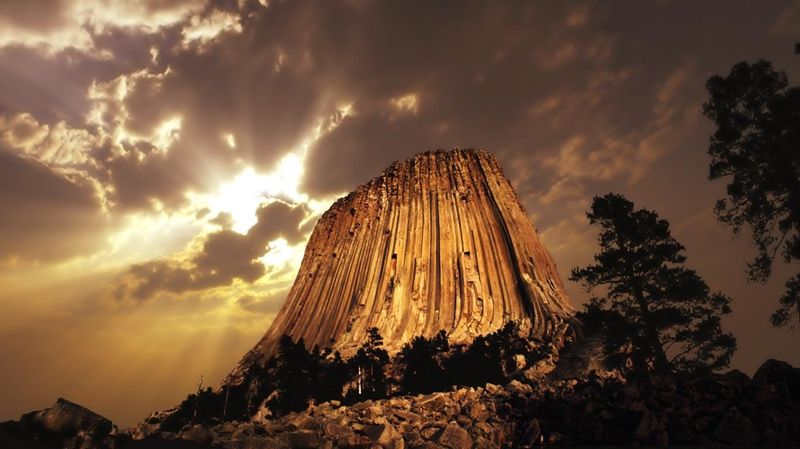 The amazing mountain looks like a bundle of narrow vertical pillars stacked together, which were formed more than 60 million years ago as a result of volcanic activity, and then were carved by erosion. The sheer cliffs make the Devil’s Tower an almost impregnable target for climbers. So far, people have managed to conquer its top only 2 times.