The most amazing fountains in the world: wonders of form and filling

The water element always attracts people, and the sight of the jets falling from a height has a fascinating effect. In any city in the world you can find a fountain, near which vacationers and tourists are happy to spend their leisure time. But among all the variety of such structures, the most amazing fountains always stand out favorably, striking in their splendor and originality of execution.

The first positions in the rating among the most amazing fountains in the world are occupied by a grandiose structure erected in the United Arab Emirates. The structure, which covers an area corresponding to three football pitches, was erected on the artificially created Burj reservoir located near Dubai. It is unique in that it can simultaneously lift up to 80 thousand liters of water into the air, giving it a speed of about 400 km / h at the exit.

In all its glory, the composition of water jets appears in the dark, when it is illuminated by 25 spotlights, supplemented by 6.6 thousand bulbs. Every evening from 6 pm to 11 pm, guests of the complex can enjoy the action of a change of 1000 figurative compositions, accompanied by recognizable melodies spreading around the area.

The construction of the complex cost $ 218 million. That is why Dubai Fountain can rightfully be considered the most expensive hydraulic structure.

Crown Fountain, located in the Millennium Park of the city of Chicago, is notable for being a video sculpture. Lined with LCD screens, 15-meter pillars project images of the city’s residents. 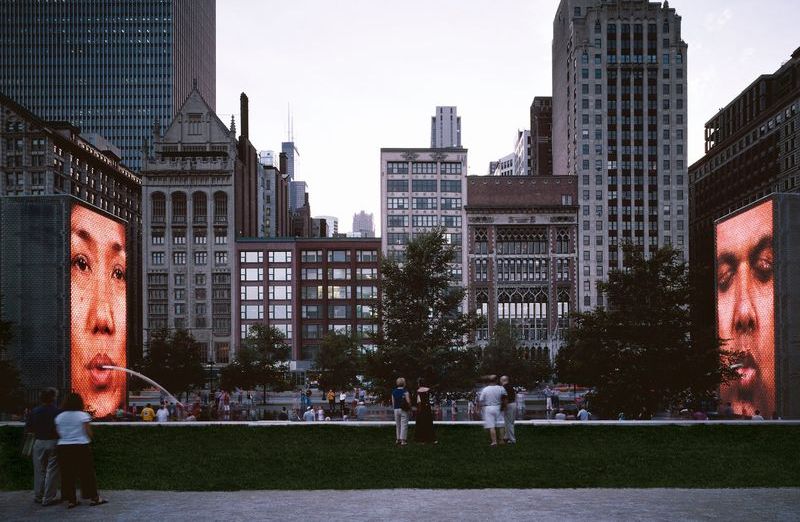 The interactive fountain is equipped with LED media facades glowing at night. The faces broadcast on the panels are reflected on the water surface, as if in a mirror. The composition has a symbolic meaning – a dialogue between two interlocutors from different “elements”. Huge house-sized faces rotate at 5-minute intervals. Some of them from time to time fold their lips into a tube, and a portion of water is poured onto the viewer.

Metamorphoses in the USA

Metalmorphosis is an unusual fountain sculpture in the form of a huge human head that adorns the central square of Charlotte, North Carolina. The mirror structure, the name of which is a combination of the two words “metal” and “metamorphosis”, is a stainless steel block structure. 14 tons of silvery metal are used to create a three-dimensional image of a nearly 8-meter human head. 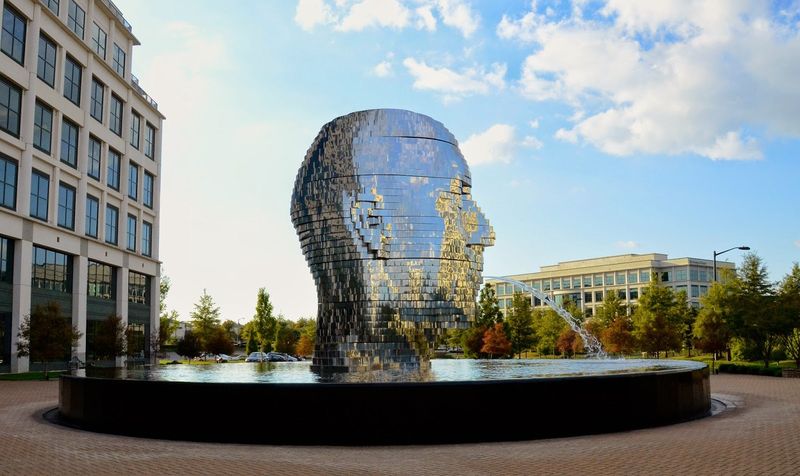 This amazing fountain is interesting because it is made of horizontal segments, each of which rotates in different directions with different speeds and intervals. The rotating segments are assembled into a single whole only once every 5 days. In this case, water flows out in a thin stream from the mouth of the head throughout the entire cycle.

A rather compact in size and seemingly unremarkable structure, it is included in the rating of the most amazing fountains in the world for the reason that instead of transparent water, mercury flows through it. The most beautiful metal, which is in a liquid-like state at a positive temperature, flows down picturesquely along the gutters. But since mercury is famous for its high toxicity, the structure is covered with a protective transparent glass – a sarcophagus. 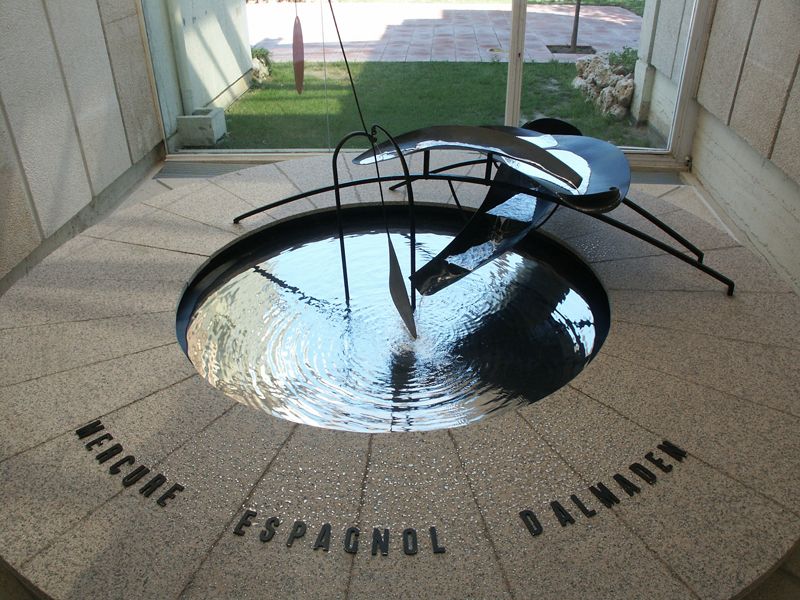 You can contemplate this miracle without fear for your health in the Juano Miro Museum in Barcelona.

There are still amazing fountains in the world, in which the main emphasis is on filling, not on form. Blood Fountain is a prime example of this.

There is an unremarkable fountain in Swansea Castle Square. It attracts massive interest only for a few days a year – from March 1 to March 9. During this period, the British celebrate the days of memory of the patron saint of Wales – St. David of Wales. In tribute to tradition, the organizers of the action tint the water, giving it a blood-red hue. The spectacle turns out to be unusually frightening, but at the same time exciting. 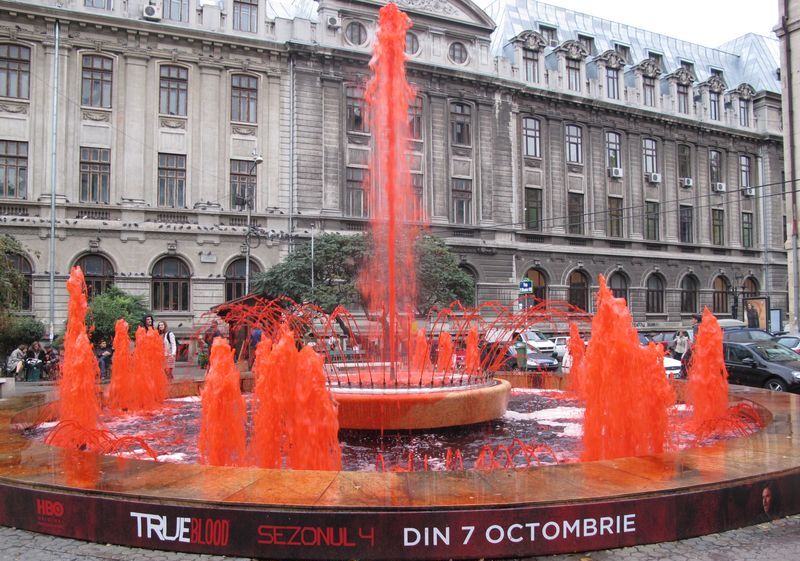 A similar structure can be found in Bucharest. It was created to draw attention to such a disease as hemophilia, which today is an acute social problem.

The whirlwind, swirling the whirlpool, described in ancient Greek treatises, took shape. Such an amazing fountain in the form of a spiraling column of water, forming a whirlpool at the central point, can be seen in the “Siem Hall” in Sunderland. 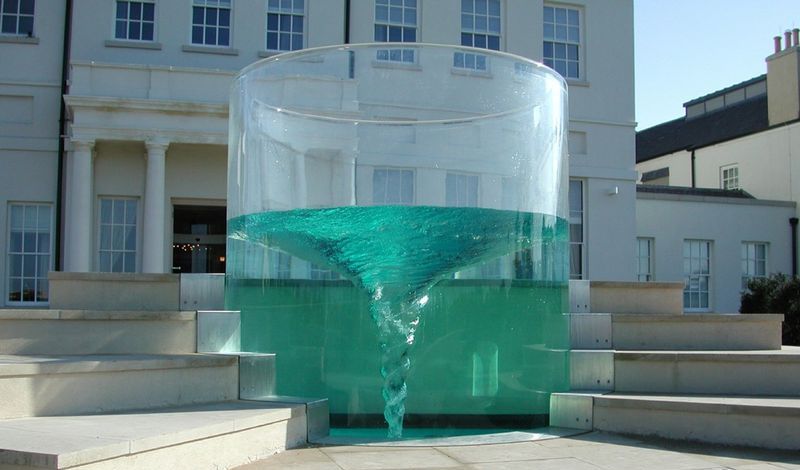 Through the transparent walls of a large vertically installed cylinder, made of durable acrylic, you can clearly see how an air-vortex flow forms every quarter of an hour. It forms a real funnel.

The building got its name in honor of the character of Greek mythology Charybdis. Having angered Zeus with her rash act, she was turned into a giant whirlpool that began to swallow sea vessels.

Fountain of Wealth in Singapore

The fountain of fortune and wealth is a structure that looks like a donut on legs. It belongs to the number of amazing fountains in the world for the reason that it was designed according to all the rules of the Taoist practice of Feng Shui. When creating the design, the authors took into account: 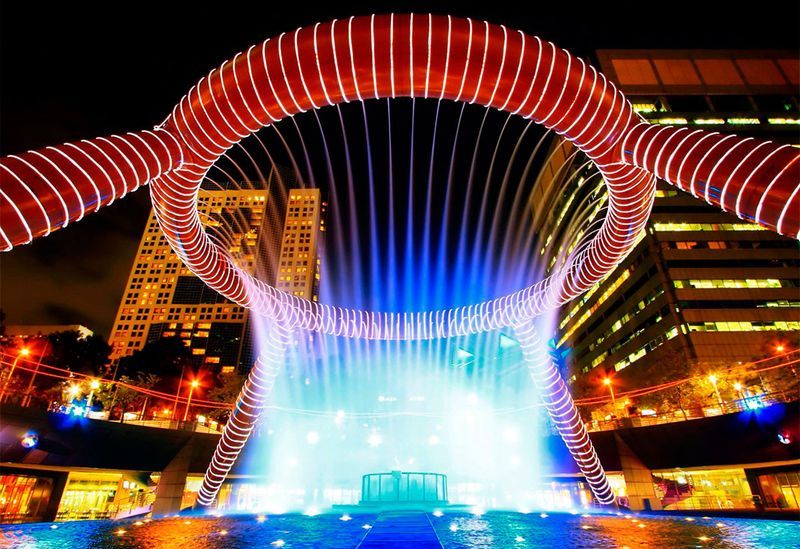 Tourists visiting it, in order to achieve success in their endeavors and rather get rich, try to bypass the structure counterclockwise, and then touch the central stream. To satisfy the desire of visitors, the organizers temporarily turn off the jets located along the perimeter 3 times a day, leaving only the central fountain functioning.

The Moonlight Rainbow is a grandiose structure that adorns the Banpo Bridge with a length of 1,140 meters. It is officially listed in the Guinness Book of Records.

Unlike traditional water structures, where the jets rise under the pressure of air, the Panpo water flows are directed to the sides and down. For the operation of the structure, water is taken by 38 pumps from the Hangang River, providing a daily flow of about 109 tons. Thanks to the powerful filters provided in the design, the water returns to the river already purified. 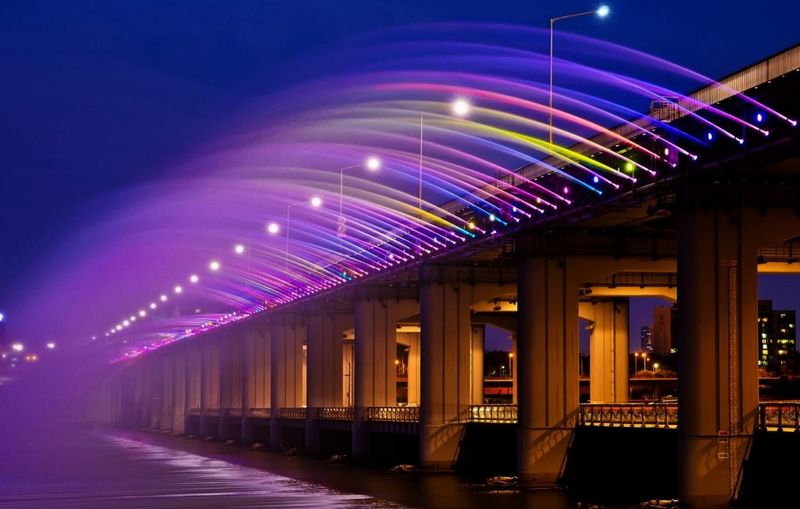 But the main beauty of the building is in the incredible illumination created by 10 thousand LED lamps. They paint the cascading water jets in all colors of the rainbow.

An unusual fountain is another futuristic wonder. It got its name “71 fountains” in honor of its location, since it is located on the outskirts of the 71st kilometer from Ohio. 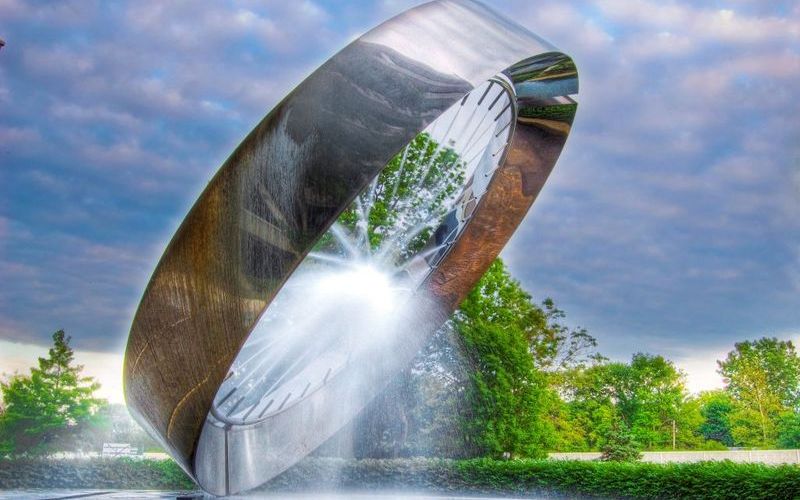 The hydraulic structure is made in the form of a huge ring, on the inner side of which hundreds of nozzles are located. They direct the jets of water at such an angle that their intersection point is formed strictly in the center.

Globe hovering over water in the USA

A composition in the form of the largest model of the planet Earth framed by the water element adorns Meadows-Corona Park in New York. It was installed in the mid 60s of the last century as a symbol of the beginning of the space age.

The construction is one of the most amazing fountains in the world for the reason that the globe acting as the center of the composition is recognized as the largest model of the Earth among those existing in the world. 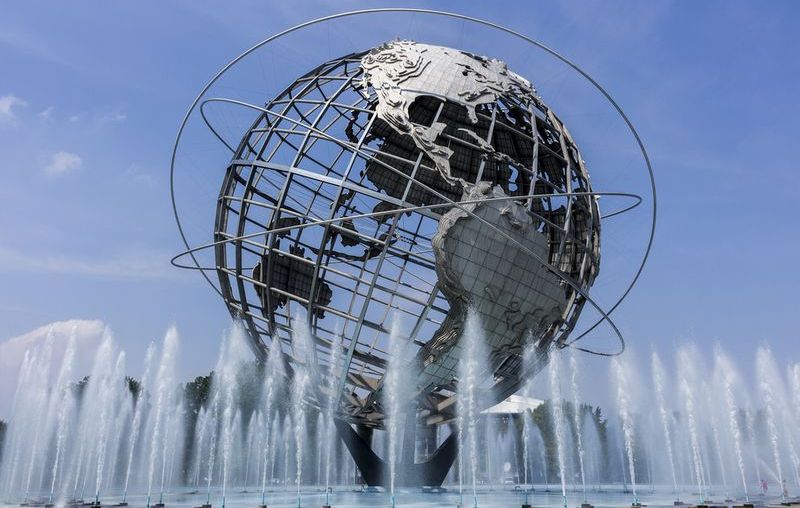 The dimensions of the hydraulic structure are striking:

The spherical structure is framed by 3 steel rings symbolizing the orbits along which the Telstar communications satellite, the American astronaut J. Glenn and our compatriot Yuri Gagarin flew.

When the backlight is turned on in the evening, on a huge globe, dots appear with bright lights indicating the location of the capitals of large states.

An original high-tech hydrotechnical facility entertains passengers at Osaka Station. The principle of operation of the device resembles that of a huge inkjet printer. It displays on the monitor the patterns set by the program, alternating with text messages, pictures and information about the time. 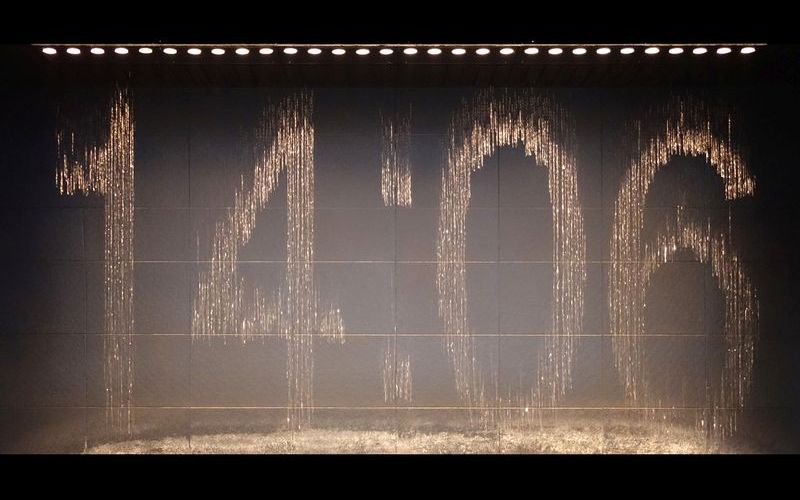 Only hundreds of valves placed on the surface, instead of ink, release in a certain sequence a strictly assigned number of water jets. The LED lamps located around the perimeter of the screen effectively illuminate the developed patterns.

Free Quebec in the USA

It is hard to believe that this incomprehensible pile of concrete is also a fountain.

The structure represents hollow containers intertwining in the most incredible configurations, along the inner walls of which water flows flow. A concrete composition in gray-beige tones, decorated in a surrelic style, is placed in the center of the pool. The main idea of ​​this creation is the freedom of both man and Quebec. 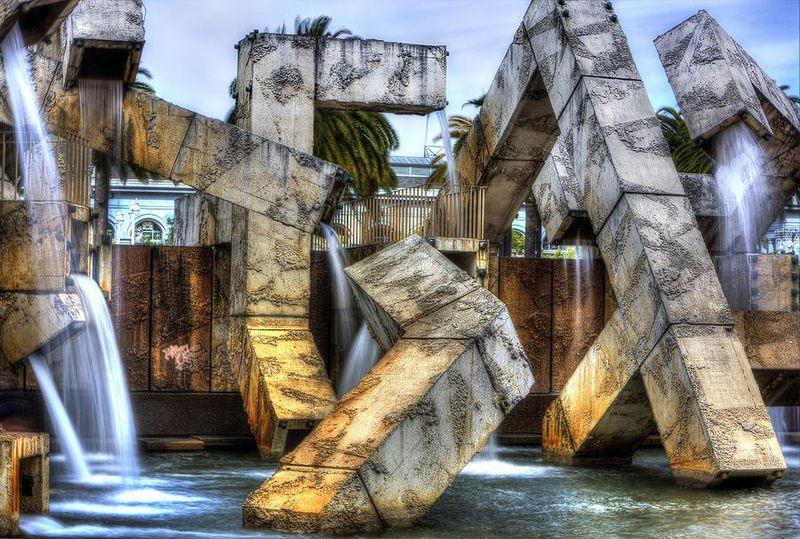 Deliberately emphasized pipe defects and the rough texture of the material make a very ambiguous impression on the audience. Some consider this hydraulic structure to be disgusting and monstrous, while others, on the contrary, consider it charming.

The musical composition of Bellagio is a must-see item in the entertainment program for visitors to Las Vegas. The jets of water, rhythmically moving to the accompaniment of modern and classical music, delight the audience. Thousands of nozzles fixed at the bottom of the lake allow jets to soar upwards at lightning speed, then bend under their own weight, demonstrating natural grace. Moveable stands allow flows to move freely, providing the necessary configurations for spectacular compositions. 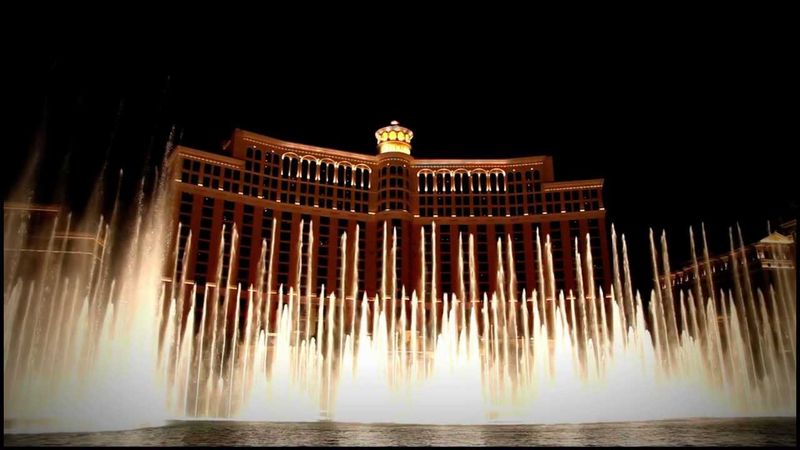 An enchanting show takes place every day. It lasts from lunchtime until midnight. The water composition looks most advantageous in the evening, when light and sound waves are projected onto a screen created from jets. As a result, the viewer enjoys the unique beauty of spectacular light-water jet symphonies.

The famous floating cubes can be seen at the Dream Pond in the Japanese city of Osaka. They represent a composition of 9 geometric shapes made of stone and metal. The composition symbolizes the unity and harmony of the earthly and heavenly. The number of elements involved, which in Japanese culture symbolize pain and anguish, gives the composition a meaning that can be described by the phrase “through thorns to the stars.” 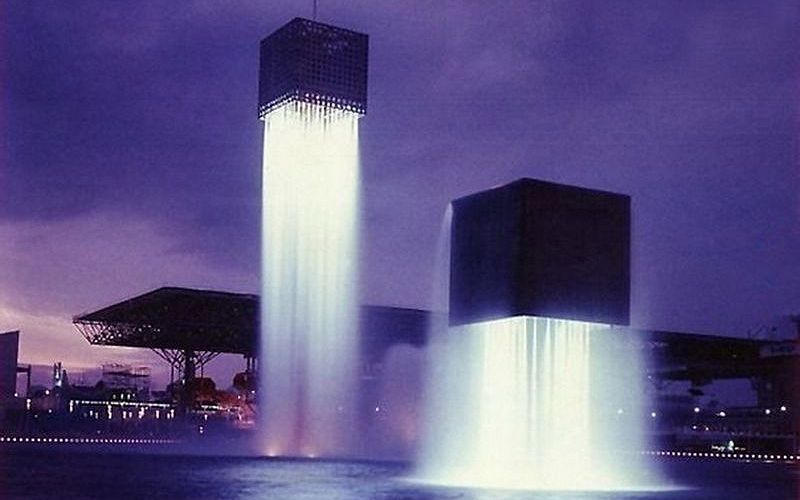 Functioning cubes are a stunning illusion! One gets the impression that huge hexagons are suspended above the jet stream thrown out of the water. And not far from them, a giant butterfly is trying to soar into the air. In fact, the structure rises on transparent powerful supports that hide behind the falling water jets. Despite the fact that the building was built almost 40 years ago, it still looks very impressive and modern today. 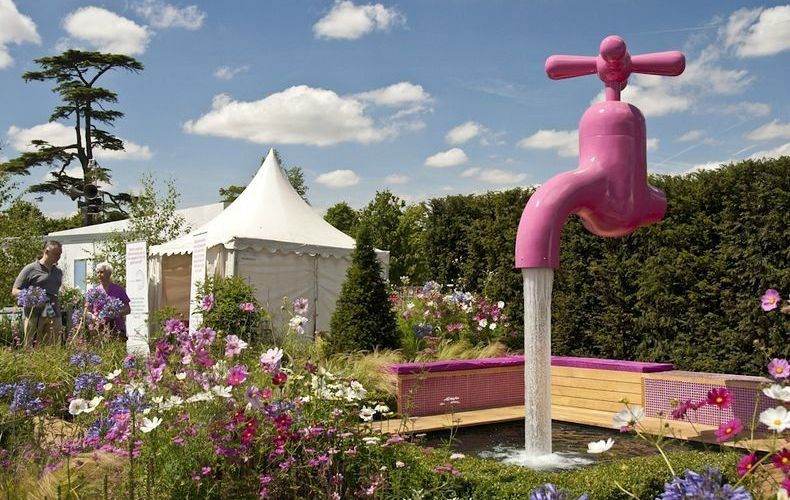 The fountains in the form of taps are designed according to the same principle. Unusual compositions adorn many cities. Giant cranes floating in the air can be found in Spain, Tenerife, Canada, USA, Switzerland, Russia. The secret of the same type of structures lies in the translucent water pipes hidden under the streams of water.