The men’s “autumn” came in winter …

Everyone knows about the female menopause. And what is known about menopause?

As it turned out, men during this period are very vulnerable psychologically.

Women’s problems associated with this period of life are widely discussed in society. But for some reason it is not customary to talk about men’s “autumn”. Just some kind of sexism. But now it’s February. Month of our male defenders. However, Natalya Vashkova, family psychologist at the Institute of Mental Health, assures:

– February, and indeed winter, is a difficult time for men in menopause. They get depressed.

It would seem, well, they would sleep for themselves. But no! It is in the winter that dating sites come to life, and the number of cavaliers who dream of “falling in” or even “falling” on a lady they like increases dramatically.

Andrologists say: there is an explanation for this phenomenon. A man, shall we say, with significant life experience has a mad desire to sharply rejuvenate. Like a king in a fairy tale, he will not jump into a cauldron of boiling water. But, having dropped ten years in the questionnaire, will appear on the dating site in all its glory. True, often rumpled, with a beer belly, but in the firm belief that he is Apollo Belvedere!

KNIGHTS WITH AND WITHOUT ARMOR

Recently I looked at dating sites profiles and photos of men of respectable age (50 years and older). Most resembled the wax figures from Madame Tussauds.

Especially the aged Pinocchio with a short nose, demanding a girl no older than 23 years old, and also Carlson in his “prime of life” weighing under 300 kilograms, has especially sunk into memory. Many “autumn” macho, confident in women’s unpretentiousness and stupidity, played up themselves in the questionnaires with the help of abbreviations: “There is a w / p, a / m, but you still are not …”, “A man with refined taste is looking for a girl b / c , 92, 50×61,55×93, 45. Not a bore. “

Other announcements from knights with armor and without them are simply impossible to read without laughing: “I am 67. I want to meet a 25-year-old woman, a brunette, over 173 tall, with blue eyes and a gentle character. Briefly about myself: 12 cm. ” “Twice widower, 65 years old is waiting for a young and beautiful, old women 40+, please do not write.”

THE ROOF IS NOT RUNNING?

– This is really so, – Natalya Vashkova agrees. – A sharp decline in the male sex hormone testosterone worsens health, “breakdowns” during intercourse begin, and this knocks a man out of his usual “male” rut. After all, in order for the body to have time to adapt to changes, the decrease in testosterone levels should not exceed 1-2% per year. But this is not the case for everyone. And then all body systems suffer, including the psyche. The man gets depressed. Self-esteem drops sharply. So many are trying to raise it: someone hopes for alcohol, and someone – on dating sites and a 20-year-old beauty with whom “everything will be fine.”

– Well, what to do? What advice can you give to men over a certain age?

– Male menopause (scientifically age-related androgenic deficiency) begins at about 50 years old, less often at 45. If you play sports, eat right, it will be “soft”. Many men under 70 feel good and have an active sex life. And this is good: with the termination of sexual contacts, a final imbalance of all body systems can occur.

I want to say right away: advice is needed only for those who have a “hard” climax: depression, obesity, heart problems, fear of intimacy with a woman due to the fact that there are doubts about the ability to have sexual intercourse with her.

Tip # 1… Visit an andrologist and psychotherapist. They will decide on the appointment of symptomatic drugs, physiotherapy, and, if urgently needed, hormone replacement therapy (we are talking about testosterone drugs).

Tip # 2… All men, without exception, at the age of “fall” need to be regularly tested for prostate specific antigen (PSA), so as not to miss prostate disease or, worse, cancer, as well as a complete blood count and biochemical analysis.

Tip # 3… Even if you have “everything is bad” and testosterone is below 12 nmol / L (absolute hormone deficiency), do not panic – in the arsenal of science today there are many ways to help you, right up to operating rooms. 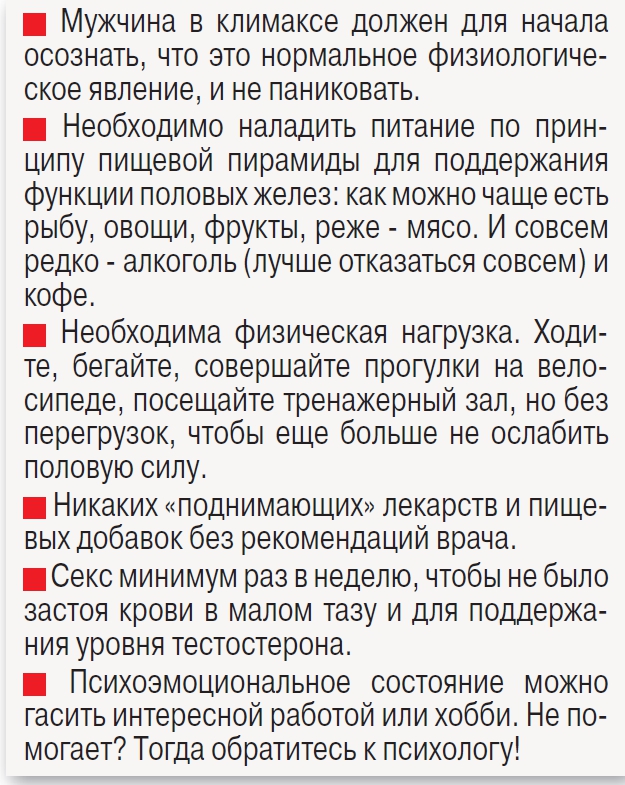