While telecommuting and online interviewing have become commonplace for some, some people can still find themselves in an awkward position.

For example, Jakob Funk Kierkegaard, a financial expert from Germany, was caught off guard by his own son. The boy entered the room and did not feel the slightest respect for the fact that dad was giving interviews – he tried his best to draw all the attention to himself, sometimes unceremoniously and not too culturally. 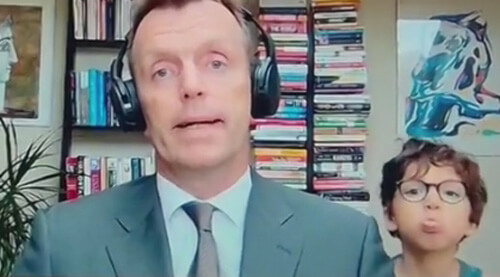 The video spread on social networks and caused not only laughter, but also the delight of moms and dads who were forced to combine work and sitting at home with mischievous kids. They praised the expert for the rare calmness with which he spoke without being distracted by the child’s antics. However, later the father of the family admitted that he could hardly restrain himself from laughing.

Special guest on @bsurveillance was very excited about Weidmann’s departure from the Bundesbank pic.twitter.com/o2sgMk2MK0

A well-mannered boy himself does not litter on the road, and will not allow others