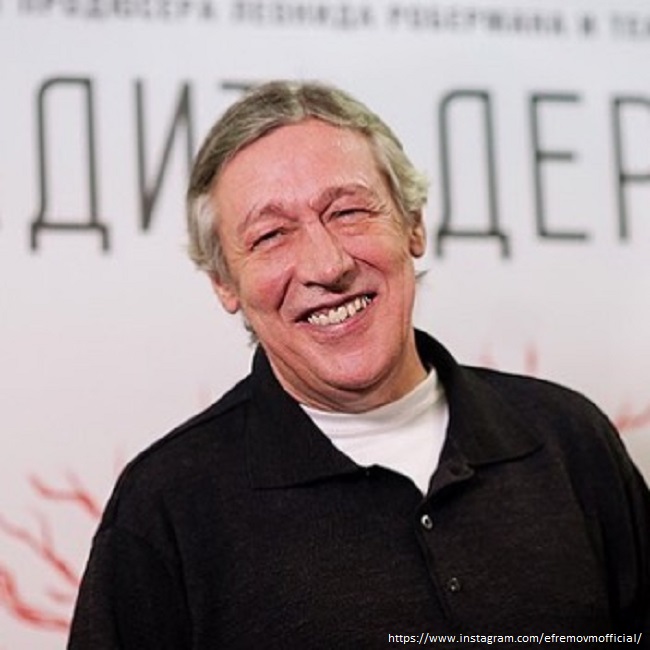 The ex-wife of actor Mikhail Efremov, Evgenia Dobrovolskaya, admitted that she drank with him.

The woman gave a frank interview in which she talked about family life with the artist. They fell in love with each other when they were in the theater studio “Sovremennik-2”, and got married, but this marriage was unhappy for both.

Dobrovolskaya and Efremov lived together for seven years – from 1990 to 1997 – and raised their son Nikolai, who was born a year after the wedding. The couple settled in a room in a communal apartment, where they always had a real entrance yard, the actress recalls. The gatherings with the star couple could not do without alcohol, which even then Efremov drank in large quantities.

“They drank. And I am with them. I didn’t rub them with them“, – Dobrovolskaya admitted.

The artist was not delighted with such behavior of Efremov, especially since, having drunk too much, the actor always got involved in fights.

“I’ve never been to the police so much. He had to sort things out all the time“, – complained Dobrovolskaya in an interview for the Youtube-project” Tell Gordeeva “.

Of course, such antics of Efremov did not contribute to the strengthening of his marriage with Dobrovolskaya. The actress believed that she was in some kind of insane asylum, where “it took two years,” and more than once thought about leaving. Finally, Eugene and Mikhail broke up when their son was six years old. The artist literally ran away from her ex-husband and was incredibly happy about this. However, they managed to maintain friendly relations.

Having learned about the fatal accident that Efremov arranged, Dobrovolskaya was very worried about him, but she perfectly understood that the actor could well have got into such an accident, because in a drunken state he was completely different from himself. However, the actress did not go to court, because she did not agree with how her ex-husband and his then lawyer Elman Pashayev behaved.