The end of the red president

105 years ago, Yakov Mikhailovich Sverdlov became the head of the Soviet state – he headed the All-Russian Central Executive Committee of Soviets (VTsIK).

In the Western press, he was immediately nicknamed the “red president.” It was this man who stood at the origins of Soviet power and literally covered the whole of Russia with blood.

FOR THE POWER OF SOVIETS

Yakov Mikhailovich had great authority in the Bolshevik Party. Moreover, he did not come forward as an ideologist or a journalist, he has never been in exile. Sverdlov came out of the militants, closely associated with the criminal world. This was his strength.

The son of the owner of an engraving workshop in Nizhny Novgorod, who made good money on the manufacture of forged documents, Sverdlov grew up as a smart and pugnacious boy. His soul did not lay down to study, business did not appeal. He chose the revolutionary path, and he realized early on that the revolution is not only and not so much agitation as strength. And more money.

During the years of the first revolution, Sverdlov gathered gangs of punks who attacked workers who gathered in the tea rooms of the Union of the Russian People. Not everyone knows that this most massive party in the pre-revolutionary years, which the revolutionaries branded as reactionary and Black Hundreds, set the task of fighting for popular sobriety. The Union opened teahouses, where workers could socialize after their shifts or on weekends, relax over tea and read newspapers. These teahouses were a favorite target for revolutionary militants.

As the American researcher of the Russian revolutionary movement Anna Geifman writes, “in the city of Yekaterinburg, members of the Bolshevik combat detachment under the command of Yakov Sverdlov constantly terrorized local supporters of the Black Hundred, killing them at every opportunity.” All this, of course, was presented as a struggle between the progressive forces and the forces of reaction.

So, on November 21, 1917, Sverdlov became the “Soviet President”, and a little later – one of the main instigators of the Civil War.

Here is what he said in his famous speech in May 1918: “We must most seriously raise the question of stratification in the countryside, the question of creating two opposing hostile forces, the task of opposing the poorest strata to the kulak elements. Only if we can split the countryside into two irreconcilable hostile camps, if we can kindle there the same civil war that was going on in the cities not so long ago, only then can we say that we have done what we did with regard to the countryside. what could be done for the cities. It is said cynically and directly, it remains only to add that the vast majority of the country’s population lived “in the countryside” and that, according to official data, those same “poorest strata” made up 4% of the peasantry.

Yakov Mikhailovich – the initiator and main organizer of decossackization. It was a real Cossack Holocaust. Sverdlov’s directives prescribed the physical destruction of the Cossacks and their families, the prohibition of folk customs (up to wearing bloomers with stripes) and the very word “Cossack”, the resettlement of land-poor peasants from other provinces to the original Cossack lands. All this, of course, was covered by dense communist demagogy, concern for the poor …

Meticulous historians come to the conclusion that Sverdlov was behind the assassination attempt on Lenin by Fanny Kaplan. Apparently, it was one of the Ural lessons devoted to Sverdlov, who had already moved to serve in the Cheka. By the way, Lenin, losing consciousness, managed to ask if he was caught. His, not hers…

Immediately after the assassination attempt, Sverdlov issues the famous decree on the Red Terror, and a bloody bacchanalia intensifies in the country. But still Sverdlov lost. There are three versions of its end. Common to all is the “last public speech” of Yakov Mikhailovich on March 7, 1919 at a rally in the railway workshops in Orel. Further versions diverge.

According to the official “life” of the communist saint Yakov Sverdlov, he felt bad on the way – the Spaniard began – but nevertheless he spoke to the workers. He returned home and lay down. On March 16, Lenin visited him, literally a few minutes before his death, and even affectionately stroked the hand of his faithful comrade-in-arms. 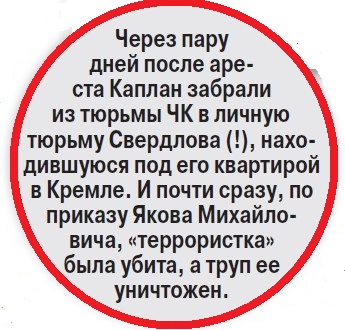 Second version. The Oryol railway workers expressed their disagreement with the policy of the Soviet government, the robbery of the peasants, famine and the Red Terror, and when the chairman of the All-Russian Central Executive Committee began to teach them, they beat him half to death, which is why he, having reached Moscow, died. Note that this happened to other red leaders. There are descriptions of how Trotsky fled from the rally, how Lunacharsky was beaten off from the angry workers, how Kalinin got into a similar situation.

Third version. As soon as Sverdlov appeared in the Oryol workshops, some people whom no one had seen before began to shout: “Long live the chairman of the All-Russian Central Executive Committee!”, Throwing him high, but not catching him. After several falls on the concrete floor, the “Soviet president” began to spit blood. Some historians believe that the “unknowns” were agents of Lenin, who returned the debt to his kind friend Yakov Mikhailovich for the “assassin of Fanny Kaplan.”