The deadly kiss of the black widow

Inhabitants of the Volgograd region are attacked by poisonous spiders karakurt.

12 people have already turned to local hospitals, having received dangerous bites. Some are still in intensive care.

While “Black Widow” with Scarlett Johansson in the title role is shown on the big screens, the Volgograd region is experiencing its real thriller with the participation of black widows – poisonous karakurt spiders. An abnormally hot summer with a temperature of +42 degrees, which settled for a long time in Volgograd, reminds the karakurt of the native deserts of Kazakhstan, from which arthropod migrants have long migrated to the neighboring Russian region. It looks like the hotter it gets, the more aggressive the spiders are.

Recall that a similar invasion of karakurt was noted in 2010, which was very hot for the Volgograd and Saratov regions. It seems that global warming carries with it another danger in addition to the frequent storms, hurricanes and periods of unbearable heat – the invasion of poisonous creatures. Entomologists have previously noted that in hot weather, the aggressiveness of poisonous spiders in the United States increases. True, these were spiders of a different species, but their habits, apparently, were similar.

PAIN – YOU WILL NOT DESIRE THE ENEMY!

Now doctors at the Center for Acute Poisoning of the Volgograd State Healthcare Institution “GKB SMP No. 25” are fighting for the lives of 12 patients, including two adolescents who have suffered from the bite of karakurt.

As a rule, karakurt does not attack a person if he is not disturbed. But this is exactly what happens when summer residents dig in the beds in which the spider decided to build his lair. By accidentally shaking off a small white cocoon from strawberries while weeding the beds, summer residents receive a bite in response from an angry spider mother. Campers in nature can also stumble upon a karakurt dwelling if they accidentally step on it.

The poison of a black widow can kill, it is 17 times more poisonous than a rattlesnake toxin. Moreover, females always bite with their chelicerae fangs, since they have already safely eaten the males by the time they begin to protect their offspring from any potential enemies. 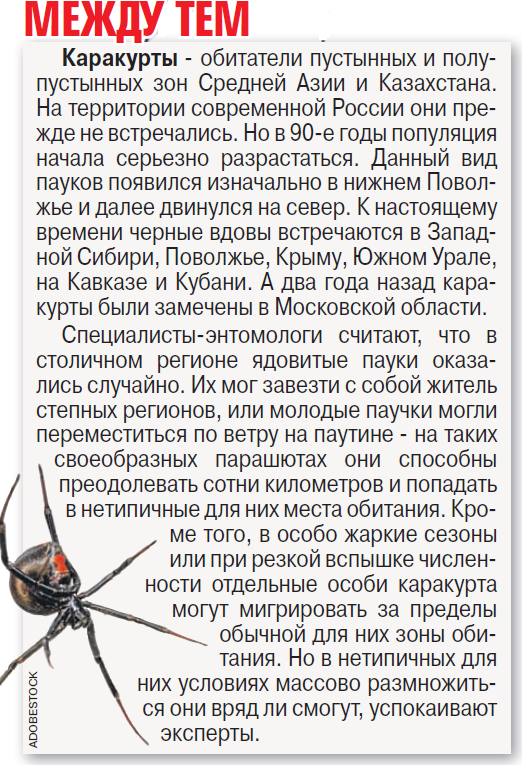 If the very moment of the karakurt bite for the victim can pass imperceptibly (those who experienced it claim that it feels like a light burn with nettles), then the subsequent sensations are difficult to confuse with something. The bite of a spider, which, having eaten the male after mating, changes its outfit with bright dots to black widow’s “clothes”, acts quickly. They say the pain is such that you won’t wish it on the enemy.

– The burning pain arising at the site of the bite in 15-20 minutes noticeably spreads throughout the body – on the abdomen, lower back, chest, – told “MN” in the health committee of the Volgograd region. – After 20-40 minutes, chills, pains in the chest, abdomen and especially in the extremities appear, as well as a feeling of unbearable burning sensation throughout the body. The head is spinning and it hurts badly. Severe weakness develops, sometimes depriving the patient of the ability to move independently. Strong excitement and fear of death appear. Breathing is difficult. The pulse becomes rapid, the heart sounds are muffled, and the blood pressure rises at first. Urinary retention sets in. Some patients experience salivation and difficulty swallowing. Three hours later, cramps of the lower and upper extremities appear. Four to five hours after the bite, nausea, vomiting, and tension in the rectus abdominis muscles appear. Profuse sweat, severe swelling and high temperature add color to this picture. The condition can last for several days. The cores have a risk that the heart will fail.

Vigilance does not interfere

A bite of a karakurt in the absence of timely assistance will lead to death. But thanks to the success of modern medicine, most of those bitten by karakurt survive, the main thing is to go to the hospital on time. Home treatment will not help here. In the event of a bite and the detection of the listed symptoms, you must immediately call an ambulance.

With proper treatment in a hospital on the fifth day, relief comes, but an itchy rash may appear on the skin of the chest, abdomen, arms and legs of the victim, which will pass over time. Ten days later, the patient, who has received acute poisoning as a result of the bite of a black widow, is discharged. However, the person still feels the strongest weakness for a long time and remains incapacitated for two weeks after discharge.

The season of karakurt bites from year to year remains mostly constant – from May to September, but most often such cases are recorded in July and August, doctors remind us and advise us to work in the beds in gloves and high boots to avoid dangerous bites.