The communists held a march in the center of Moscow, despite the ban of the authorities 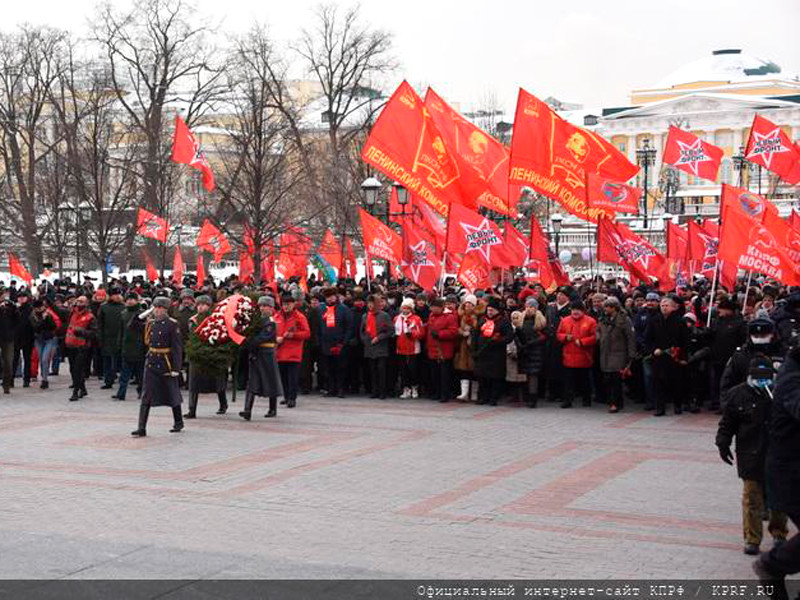 Representatives of the Communist Party of the Russian Federation and the “Left Front” held a protest march in Moscow, despite the ban of the capital’s authorities. The communists marched in a column along the Alexander Garden and laid flowers at the tomb of the Unknown Soldier. Among the participants of the action were Gennady Zyuganov, Valery Rashkin, Anastasia Udaltsova, Denis Parfenov, Nina Ostanina, Andrey Seleznev. The march passed without detention.

At about 15:30 supporters of the Communist Party of the Russian Federation and the “Left Front” lined up at the Kutafya tower of the Moscow Kremlin. The police initially did not let them in, writes Znak.com. In response to such actions of the security forces, the communists began to chant “Pass it on!” “Our government is fighting the pandemic in a very peculiar way. The participants of the event were gathered in one place. And so that it would be more crowded and tricky,” said Dmitry Saraev, a candidate for the Moscow City Duma from the Communist Party of the Russian Federation.

At about 16:00, the communists were allowed to pass. And they marched to the Eternal Flame, where they laid wreaths at the Tomb of the Unknown Soldier. The communists dispersed immediately after that.

According to the coordinator of the Left Front Sergei Udaltsov, the participants of the march managed to shout such slogans as “Russia without Putin and the oligarchs!”, “The government and the president – resign!”, “Cancel the pension reform!”, “Freedom for political prisoners!” “Against repression, for socialism!”, “Money for the people, not for the oligarchs!”, “Nationalization of the raw materials industry!” Supporters of the Left Front, added Udaltsov, during the rally stated that “the main revolutionaries today are the inhabitants of the Kremlin, carrying out anti-popular reforms, and maintaining the existing socio-economic course of the country’s development will inevitably lead to a new revolution.”

Initially, the leader of the Communist Party of the Russian Federation, Gennady Zyuganov, announced an all-Russian protest action on February 23. However, neither the regional nor the city authorities gave permission for such an action, citing sanitary restrictions imposed in connection with the coronavirus pandemic. Subsequently, the Communist Party announced that it intends to hold a rally in the format of a meeting of State Duma deputies with voters, but the communists ultimately refused this either.

In St. Petersburg, law enforcement agencies also did not detain the communist demonstrators. An uncoordinated action took place on the Petrogradskaya Embankment. In total, about a hundred people gathered there, writes DP.ru.

The action was announced in the format of communication of voters with State Duma deputy Sergei Panteleev, who did not show up due to illness. Deputies of the Legislative Assembly Irina Ivanova and Olga Khodunova addressed the audience with speeches.

The communists sang war songs (“The Red Army is Stronger of All”, “Holy War”, “Song of anxious youth”), and also marched from the picket site to the cruiser “Aurora”. During the procession, they carried posters calling for the return of the “Rothenberg Palace” to the working people. Several special police vehicles and one paddy wagon were on duty at the place of the action. Already at 12:30 the protest action ended.

In other regions, the Communist Party actions were accompanied by detentions

In the city of Novokuibyshevsk, Samara region, the police detained on Tuesday a group of activists who were laying flowers at the Lenin monument. This was reported by “MBKh Media” with reference to one of the detainees – press secretary of the regional branch of the “Left Front” Grigory Oganezov. According to him, they took explanatory notes from the detainees and released them without protocols. Initially, the police called the reason for the detention “illegal campaigning”.

Oganezov himself was detained during a one-man picket in support of political prisoners. In total, about 15 people were taken to the departments.

According to the OVD-Info project, on February 23, the Communist Party of the Russian Federation planned to hold mass rallies dedicated to the day of the creation of the Red Army. The authorities, however, refused to agree on them, citing the coronavirus epidemic. As a result, in a number of regions, the Communist Party of the Russian Federation changed the format of actions to lay flowers or meetings of deputies with voters.

In Ulan-Ude, the communists went to an uncoordinated rally, at which they supported political prisoners and demanded the resignation of the head of the regional department of the Ministry of Internal Affairs, Oleg Kudinov. The rally, which was attended by several dozen people, was held on Revolution Square. Representatives of the Communist Party of the Russian Federation, deputies of the People’s Khural, former senator and ex-head of the Buryat OMON Vyacheslav Markhaev spoke at it. The police tried to shout down the speakers in a megaphone, warning about responsibility for participation in an uncoordinated event, reports Sibir.Realii.

Markhaev recalled that Dmitry Bairov, Nadezhda Nizovkina and other political prisoners are being persecuted in Buryatia. On February 17, the court arrested human rights activist Nadezhda Nizovkina for 10 days, who was found guilty of organizing an uncoordinated protest on January 31. The lawyer said that she did not agree with the decision and went on a dry hunger strike.

Dmitry Bairov was found guilty on January 29 of repeated violation of the procedure for organizing a rally in support of opposition leader Alexei Navalny on January 23. At the same time, the blogger did not participate in the action, but covered it – he had a press card of the journalist with him. He was arrested for 25 days. Bairov was twice hospitalized from the IVS due to deteriorating health.

Film director Artem Burlov, who planned to participate in the rally on February 23 in the capital of Buryatia, was detained by police on the eve of the rally.

In Petrozavodsk, a protest rally organized by the Communist Party of the Russian Federation brought together about 50 participants. Activists spoke out against low wages and pensions, as well as corruption and political repression. The police did not detain anyone.

In Yakutsk, the local branch of the Communist Party of the Russian Federation organized a motor rally with red flags in honor of the 103rd anniversary of the formation of the Red Army. Holiday rallies were also held in the Kostroma, Volgograd and Magadan regions, writes Rossiyskaya Gazeta.

In Ingushetia and Chechnya, the authorities combined the holiday with the anniversary of the deportation

The authorities of Ingushetia allowed the festive events to be held on February 23, but at the same time they took part in the mourning event: February 23 for Chechens and Ingush is the day of national mourning – the anniversary of the mass deportation.

To celebrate Defender of the Fatherland Day in Nazran, a site was set aside by the pond in the afternoon, and a mourning meeting was held in the morning. The event began with the reading of the Koran. The first to address the audience was the head of Ingushetia Mahmud-Ali Kalimatov. “February 23 seemed to have been deliberately chosen to cause a split among the people. The most cynical, in my understanding, is that this day was chosen, it seems to me, by some fanatic to sow confusion for the future in our people. It was on the day of the Soviet Army, so that resentment arises in us, “he said in his speech.

The official drew attention to the fact that even during the deportation, the Ingush continued to fight in the ranks of the Soviet army. “There were more than six thousand Ingush on the fronts, who fought against the fascists with the entire people of the USSR,” the head of the republic said.

Then the representative of Ingushetia in the Federation Council Issa Kostoyev spoke. “The holiday that is celebrated now in the country is not called the holiday of the Red Army, which, of course, took part in our deportation, it is called Defender of the Fatherland Day. There are problems that were born in those harsh days, this wound does not heal,” senator.

Speaker of the parliament of the republic Magomed Yandiev, senators Belan Khamchiev and Mukharbek Barakhoev and State Duma deputy Yushaa Gazgireev also spoke to the audience. Representatives of public organizations, in particular, the Council of Teips, were not allowed to the microphone.

Let us remind you that on February 23, 1944, operation “Lentil” began, during which almost 500 thousand Chechens and Ingush were evicted from the territory of the Chechen-Ingush ASSR to Kazakhstan and Central Asia. According to various estimates, 10 thousand people died on the way, in the first years after the eviction – 100 thousand. The reasons for the repressions were declared mass desertion, draft evasion in wartime and preparation for an armed uprising in the Soviet rear. However, information about this was falsified by the NKVD authorities to justify state terror.

On November 14, 1989, the Declaration of the Supreme Soviet of the USSR “On the recognition of illegal and criminal acts of repression against the peoples subjected to forced resettlement and the provision of their rights” was adopted, according to which all repressed peoples were rehabilitated, and the repressive acts against them at the state level were recognized as illegal and criminal in the form of a policy of slander, genocide, forced resettlement, abolition of national-state formations, the establishment of a regime of terror and violence in places of special settlements.

In 2011, the authorities of Chechnya, neighboring Ingushetia, established May 10 as the Day of Mourning and Sorrow of the Peoples of Chechnya, the day of the funeral of President Akhmat Kadyrov, setting the same day to commemorate the victims of deportation instead of February 23. However, this day is not perceived as a significant date either in Chechnya or in the diaspora abroad; most residents of the republic continue to consider February 23 as the Day of Mourning. The head of the Assembly of the Peoples of the Caucasus Ruslan Kutaev, who publicly opposed the ban on mourning events in 2014, ended up in prison for almost four years. After a long hiatus in Chechnya, official funeral rallies resumed on February 23 again – they were held in 2020 and February 23, 2021. At the same time, the mourning date in the republic is also combined with the celebration of the Defender of the Fatherland Day.