The commander of the Kadyrov regiment, whose fighters are suspected of extrajudicial executions, was awarded the title of Hero of Russia 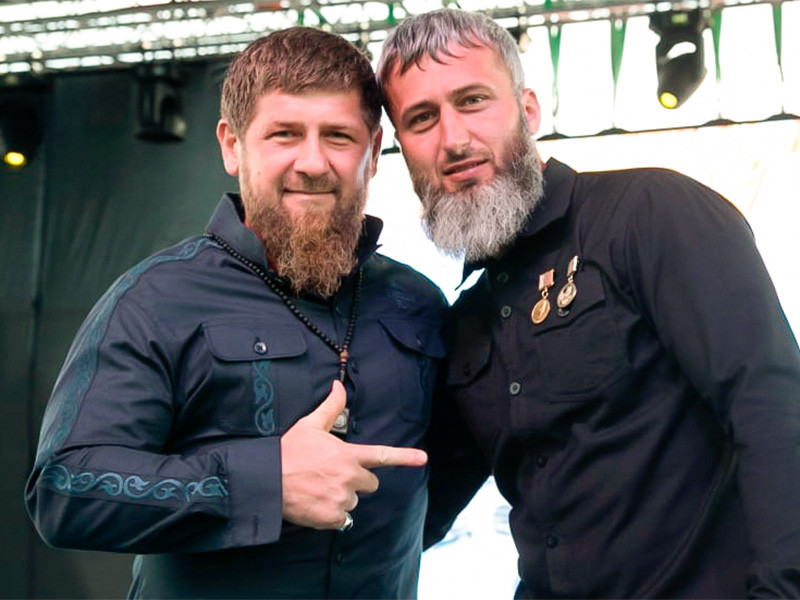 Photo: Official website of the Head of the Chechen Republic

Russian President Vladimir Putin awarded the title of Hero of Russia to the commander of the Kadyrov regiment Zamid Chalaev. It was this unit of the security forces that figured in the Novaya Gazeta investigation and in a series of publications devoted to the extrajudicial executions of detainees in Chechnya.

Vladimir Putin signed decree N 268 on conferring the title of Hero of Russia on Zamid Chalaev, head of Chechnya Ramzan Kadyrov said on Friday on his VKontakte page.

“This high award was given to Zamid Chalaev for his courage and heroism in the performance of his official duty. Of course, this is a great honor for the entire Chechen people. […] There is no doubt that Zamid Chalaev rightfully deserved the title of Hero of Russia, “the message says.

Decree N 268 as of 16.10 Moscow time has not been published on the website of the President of Russia, nor is it on the portal of legal information. The latest decree N 267, posted on the president’s website, was dated May 4, the “Caucasian Knot” notes.

Kadyrov explained the rewarding of Chalaev by the fact that he played an important role in the final defeat of the bandit underground. “It was his well-coordinated actions, effective approach, personal courage and courage that allowed us to put an end to the last organized bandit group in the Chechen Republic headed by Aslan Byutukaev,” Ramzan Kadyrov said.

On January 20, the head of Chechnya announced the destruction of a group of militants led by Aslan Byutukaev in Qatar-Yurt. The special operation was carried out by the soldiers of the Akhmat Kadyrov special police regiment. After this special operation, there were no leaders of the armed underground left in Chechnya, said experts on the North Caucasus interviewed by the “Caucasian Knot”.

Zamid Chalaev became the commander of the Kadyrov regiment in July 2019. Prior to this appointment, he held a senior position in the same unit.

Chalaev’s words about “traitors” do not correspond to either the norms of Islam or Russian legislation, and Zamid Chalaev’s speech became an illustration of the legal nihilism prevailing in the republic, said Caucasian scholars and human rights activists interviewed by the “Caucasian Knot”.

In September 2020, Zamid Chalaev made threats against those who “are holding empty talk” and spoke out against critics of the Chechen authorities living in Europe. “If you think that what you said today or tomorrow will be forgotten, it will not be forgotten. There will be demand for it. […] We won’t let you joke … Even if it changes [ситуация], we will not allow. Even if the whole world turns upside down, we will not allow it. We will call to account at any time while we are alive, “Chalaev threatened. This statement was preceded by the publication of a video humiliating the moderator of the opposition Chechen telegram channel Salman Tepsurkaev, which caused a wide resonance. The young man was forced to apologize and sit on a bottle naked.

In March 2021, the Kadyrov regiment led by Chalaev found itself at the center of a scandal after Novaya Gazeta published the story of a former regiment fighter, Suleiman Gezmakhmaev, who witnessed extrajudicial executions in Chechnya. The publication caused a resonance not only in Chechnya, where relatives of the regiment’s soldiers at a rally accused the author of the article, Elena Milashina, of provocations, but also in Moscow and outside Russia. Thus, the Commissioner for Human Rights of the Council of Europe Dunya Mijatovic on March 19 called on the Russian authorities to investigate the information presented in Novaya Gazeta.

“The addict, about whom it’s even ashamed to say that he served in the regiment, first fled to Germany, and in order to get asylum, he invented stories about his adventures, but there was not enough of his“ testimony. ”Then he came to St. Petersburg, where he knew all the drug addicts , got into debt, he already had huge amounts of unpaid loans … They found him in St. Petersburg, and he came up with fairy tales: they strangled him, they took him away, hanged him, shot him. And everywhere he … How did he manage to be everywhere? was not in Chechnya when all this happened? ” – Ramzan Kadyrov said at a meeting in the Ministry of Internal Affairs.

In March 2021, soldiers of the Akhmat Kadyrov Chechen Special Police Regiment recorded a video message to Russian President Vladimir Putin with a request to stop insults from Novaya Gazeta.

In the caption to the video posted on Instagram, the authors of the appeal stated about “vile attacks by a fake publication, such as Novaya Gazeta, against our fighters.” According to them, an information war has been launched against the regiment, the main mouthpiece of which is Novaya Gazeta and which “is firmly held in their hands by the Western special services.”

“International terrorists have unleashed a war in our region. The terrorists in the shoes of pseudo-journalists are trying to push us to this. There is no difference between them. They are doing their common dirty work aimed at the collapse of our state,” the signature says.

In the video itself, one of the fighters claims that some “scum” are making up lies against the regiment in order to get political asylum. “It is clear why they are doing this. Well, in general, everything is clear with these people. But why is Novaya Gazeta, located here in Russia, spreading their lies throughout the country? Sitting in the capital of Russia, they systematically publish false articles about us, about the Chechen Republic We believe that these provocations must be stopped, as they harm our entire country, “says one of the security officials.

“We are already being forced to have one of us take responsibility in order to stop the insults of all personnel,” said his colleague. Another participant in the video asks the supreme commander-in-chief “to stop these attacks, to stop these people who offend us, erect lies on Kadyrov’s regiment and on the Chechen Republic.”

At the end of the video, one of the regiment’s soldiers speaks in Chechen about loyalty to the head of the republic, Ramzan Kadyrov. “We will carry out any of his orders, there is no doubt about that. We will take over what needs to be taken over. We will do what he says to do. <...> Therefore, we will go all the way. Everyone who slanders us learns that Akhmat is strength, “the security official said.