Drinking tea is an ancient tradition that has existed for more than two millennia. According to legend, this drink was obtained by chance – a tea tree leaf fell into a cup of hot water that the Chinese emperor drank, giving the water a beautiful color, pleasant aroma and taste. Today, tea is loved and drunk all over the world, and the process of tea drinking in many countries has become a special ritual, where tea traditions combine elements of the culture and philosophy of the people. 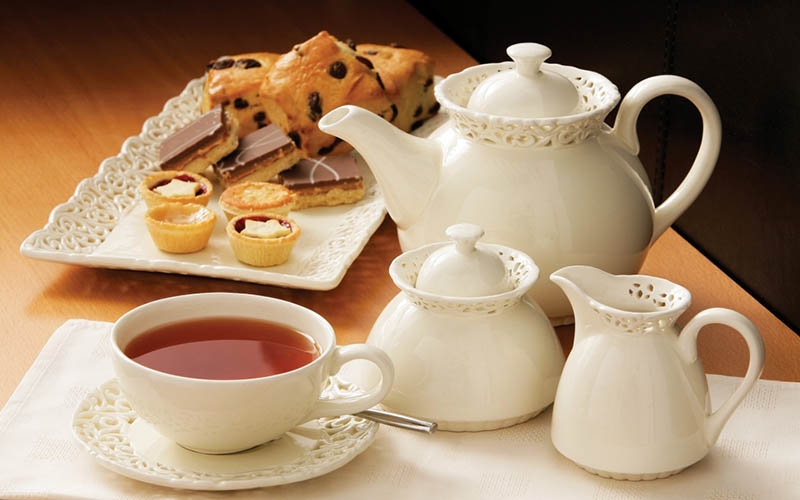 China and Japan are the countries that were the first to get acquainted with the drink from the leaves of the tropical bush Camelia sinensis and Camellia assamica. Here, tea is treated in a special way, performing certain ritual actions when drinking it.

The tea traditions of Japan prescribe the presence of a special house designed for tea drinking, and even special clothes. The Japanese traditionally use green tea, which is harvested once a year. Tea bushes are covered with capes 2 weeks before harvesting, which protect them from sunlight, then the leaves retain their green color, and the drink from them has a sweetish taste. Tea is served in cups without a handle, sugar and milk are not added so as not to distort the noble taste of the drink. Chinese tea traditions also do not provide for the serving of desserts. 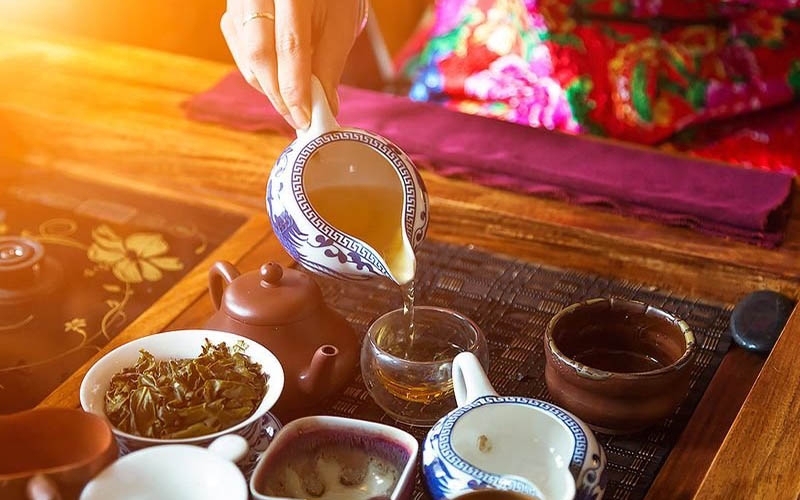 To brew a tea leaf in China, special dishes are used – a wide-mouthed glass, porcelain or clay teapot without a handle (in fact, this is a cup with a lid). This dish is called zhong or gaiwan. Boiling water is poured a little so that the tea leaves are saturated. After the drink is infused, it is poured into cups, and boiling water is again added to the gaiwan. Connoisseurs say that the strongest and most aromatic tea is obtained after the second and third pouring.

Tea was brought to India by British colonists in the early 19th century. But since the drink, prepared according to the classic English recipe, seemed to the Indians not tasty enough, they improved it by adding a large amount of milk and various spices: cinnamon, cloves, nutmeg, fennel, ginger, anise. Even today, wealthy Indian families have special servants trained in the proper brewing and serving of tea. 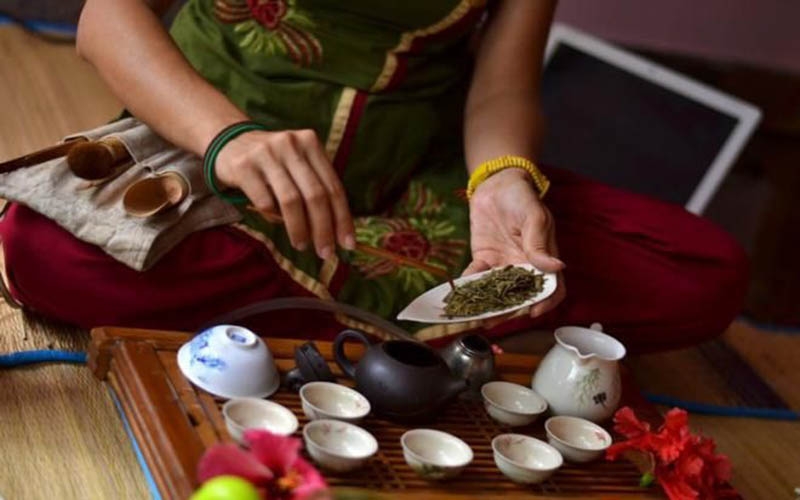 There are three types of tea that are popular in India:

Most of the British adhere to the tea traditions introduced in the middle of the last century by the Duchess of Bedford. They drink tea with milk or cream several times a day: in the morning, after (or instead of) breakfast, in the middle of the day, with light sandwiches and small scones, after 5 pm, when tea drinking accompanies hot meals. Dinner with the British is also not complete without tea. Afternoon tea (five o’clock) is usually brewed stronger than morning tea, and in the evening herbal and fruity teas (with lavender, jasmine, rose petals, citrus) are preferred. 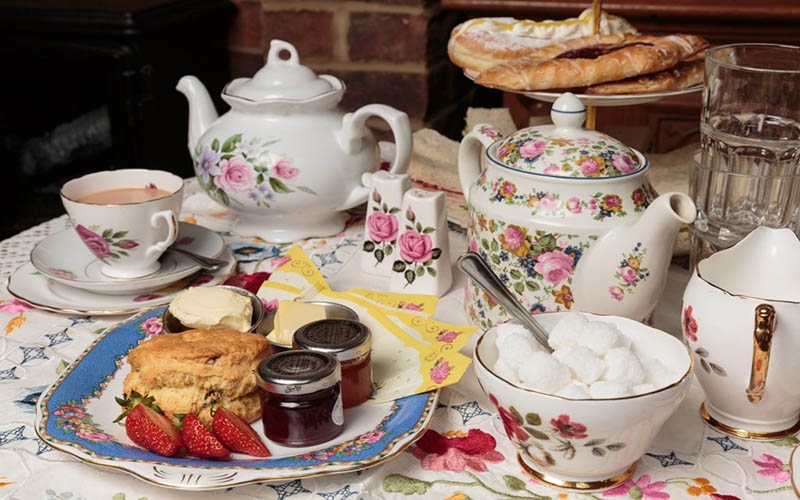 The most popular domestic tea brands in the UK are:

Asian peoples were introduced to tea earlier than Europeans. The Silk Road passed through Asia, and along with other goods, caravans carried raw materials for an exotic drink at that time. Tea quickly gained popularity and became an important element of Asian culture: any business or friendly meeting here is accompanied by tea drinking.

Since there are more than 50 countries in Asia, there are quite a lot of national traditions of the tea ceremony. Even tea-drinking utensils are different: in Central Asia, these are cups expanding upwards without a handle, in Turkey and Azerbaijan – pear-shaped cups (armudu). 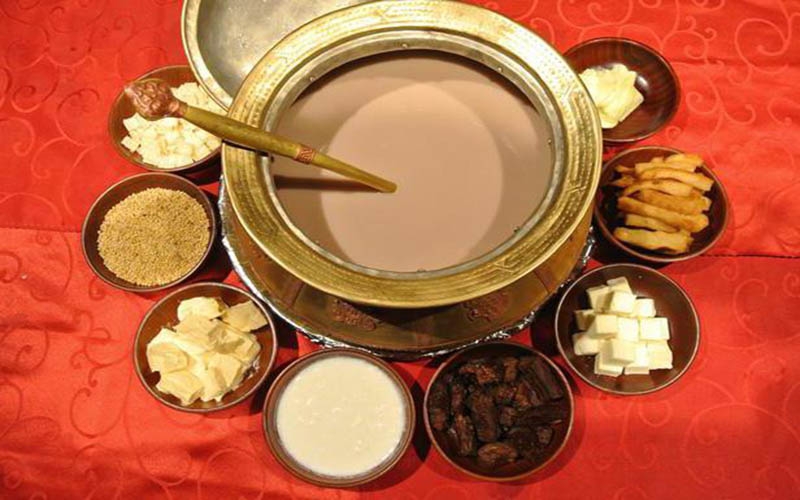 The recipes for making the drink are also different. 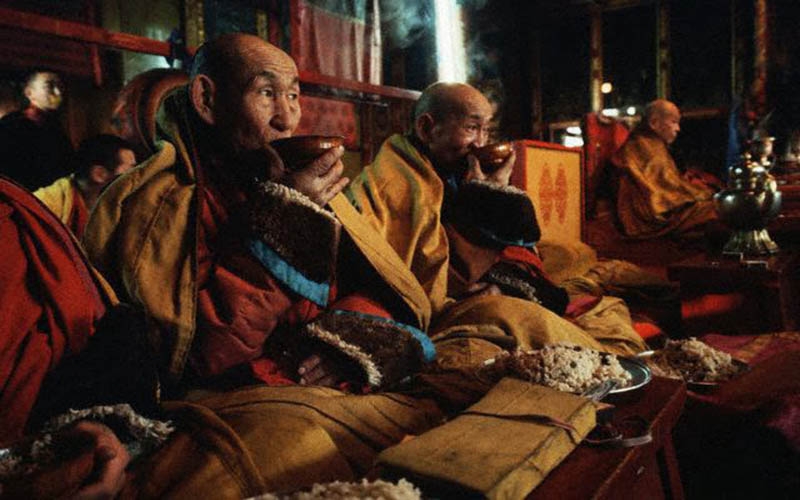 Tea in America, Africa and Australia

The fashion for tea drinking was brought to the American continent by English colonists in the 17th century, and over time this ritual became the standard of hospitality and good education. It was in the USA that tea bags were invented, which greatly simplified the process of making a drink, but significantly worsened its quality. Nowadays, Americans use tea more as a soft drink, and they drink it with ice, and when they are hot, they use it mainly for colds.

Unlike Americans, the inhabitants of the African continent love tea and drink it regularly. It is prepared in a vessel similar to a Russian samovar. Tea leaves are poured into boiling water, then the water is drained and returned to the teapot again. This procedure is repeated several times so that the welding becomes homogeneous and saturated with air. Tea is used mainly green, with the addition of mint, they drink it from small glass cups, put a lot of sugar. 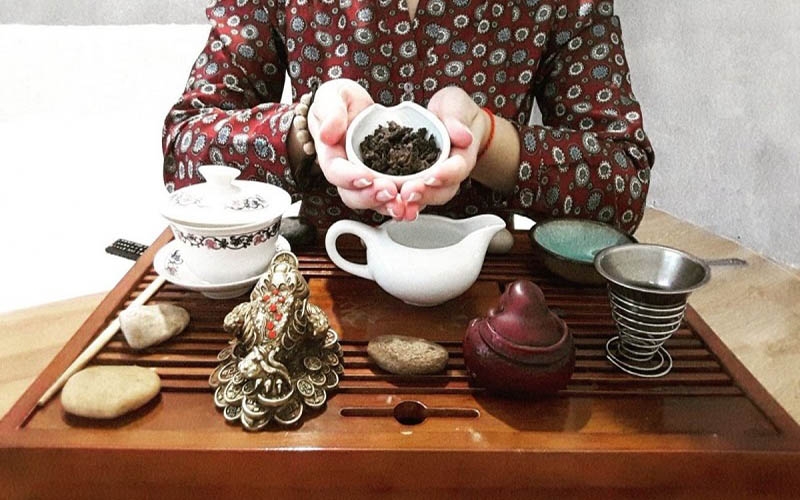 In Australia, tea appeared with the British settlers, and the locals very quickly became its avid lovers. Both black and green varieties were popular among the Maori, and the favorite cooking option was called “Billy’s brew” (“Billy Brew”). Tea was poured into a canister, filled with cold water and boiled over a fire. It turned out a very strong drink, which they drank with sugar and milk. Modern Australians prefer to drink tea bags in granules.

In Russia, the fashion for tea drinking first appeared in aristocratic circles. Sovereign Mikhail Romanov received a parcel from the Mongol Khan with dried leaves of the Camelia shrub and an indication that a decoction of them has healing properties. Mass consumption of tea in Russia became under Peter the Great.

A distinctive feature of Russian tea traditions is the use of a special-shaped metal vessel for boiling water – a samovar, on top of which a teapot with tea leaves was placed. To keep warm, the teapot was covered with a towel or a quilted cover in the form of a doll – a “tea woman”. They drank a hot drink from saucers, served cookies, muffins, jam. 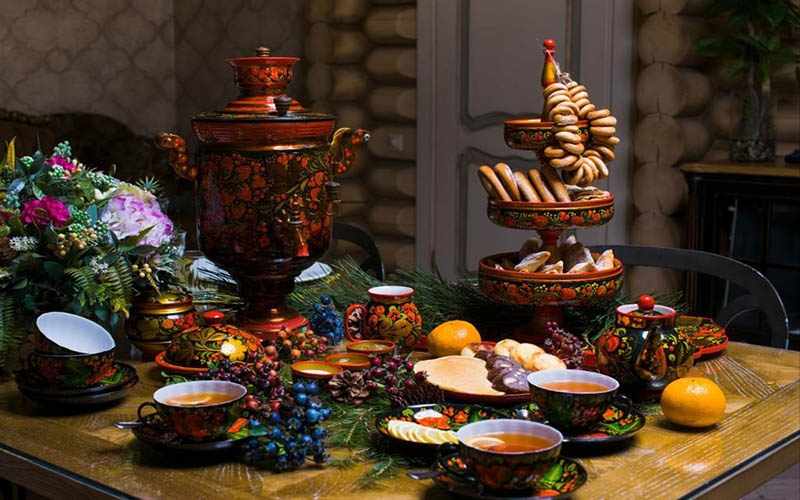 Most Russians prefer black tea, although recently, due to the fashion for a healthy lifestyle, the demand for blended herbal varieties has also increased. In particular, the production of the Crimean Tea Traditions company, which offers up to 100 items of multi-component collections from medicinal herbs and berries growing in ecologically clean areas of the peninsula, is very popular.

There are more than one and a half thousand varieties of tea today. The color, taste and smell of the drink depends on the time of collection of the leaves, the terroir (climate and soil characteristics of the growing region), the degree of fermentation and production technologies. The drink is prepared in different ways, combining tea leaves with different additives.

A mixture of cardamom, cinnamon, ginger, cloves and allspice is poured with a small amount of milk and simmered over low heat for 3-4 minutes. Then Assam or Darjeeling black tea is added and kept at a temperature close to boiling for a few more minutes. Serve by filtering through a strainer and adding sugar or honey.

This is an Indian folk recipe, according to which tea leaves are not steamed, but boiled. Tea leaves, crushed cinnamon, cardamom, allspice and milk are placed in a special saucepan and boiled for about a minute. Then sugar is added and kept on fire for another minute. 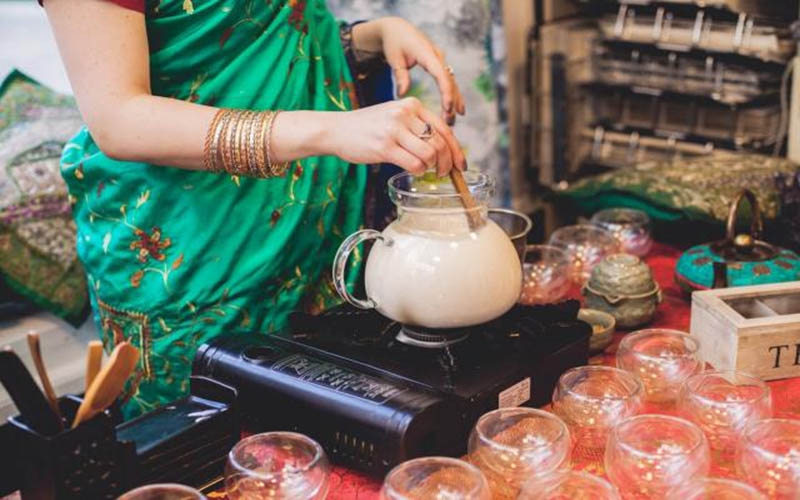 With lemongrass and ginger

Such a drink with a pleasant citrus aroma has analgesic and tonic properties, and is prepared very simply: whole or chopped tea leaves are brewed together with a stalk of lemongrass (lemongrass) and grated ginger. After insisting, light honey is added to it.

This interesting recipe comes from Holland. Tea leaves are poured with boiling water in a French press, insisted for 3 minutes. Then the tea leaves are drained, lemon or orange syrup and cocoa are added to it, beaten thoroughly with a whisk. The finished drink is poured into portioned glasses and sprinkled with grated chocolate.

With spices, citruses and mint

This recipe is popular in Morocco. Sugar syrup is poured into a special glass, cinnamon, cloves, orange and lemon slices are placed. The mint leaf is lightly crushed to release the fragrant juice, then the walls of the glass are rubbed with this leaf. Only after that, brewed green tea is poured into a glass. 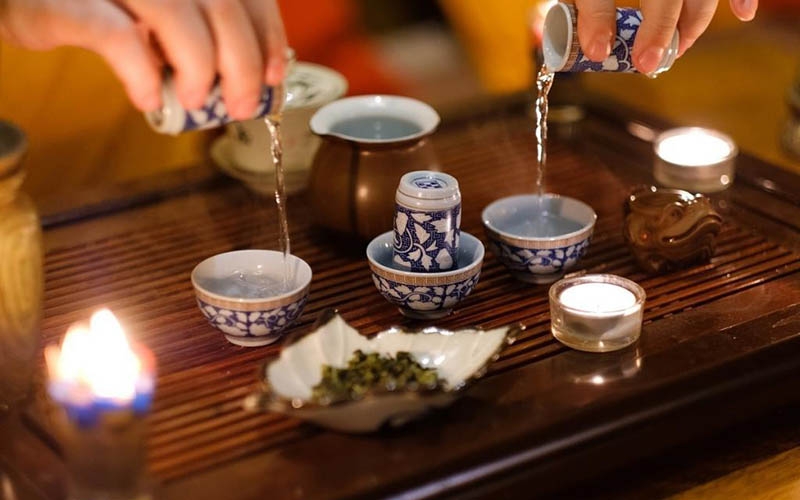 Such a warming cocktail in Jamaica is considered the national drink. Rum, lime and orange slices are mixed in a saucepan-stewpan, poured with strong tea. The mixture is heated almost to a boil, after which sugar and cinnamon are added.