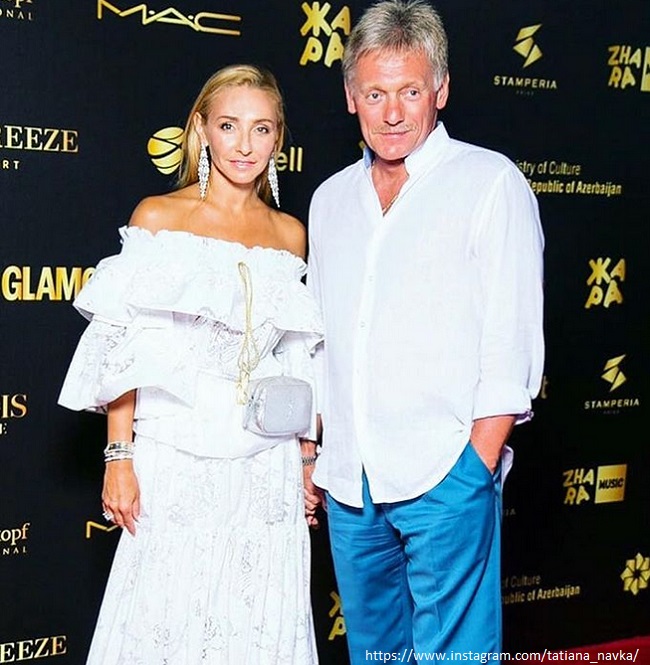 45-year-old figure skater Tatyana Navka published a series of shots with Dmitry Peskov and touchingly congratulated her husband on his 53rd birthday.

Tatiana and Dmitry have been happily married for five years. The husband and wife have a six-year-old daughter, Nadezhda. The girl is preparing to follow in her mother's footsteps and is also fond of figure skating. The star athlete often boasts of the baby's successes, but she rarely uploads family pictures with her husband.

In honor of Dmitry's holiday, she decided to change her habits. Tatiana published a series of shots with her beloved husband, which turned out to be incredibly atmospheric and even seem intimate. In one of the pictures, the star is captured in a provocative dress with a dizzying neckline that squeezed her lush breasts very tightly.

"Thank you for being you, for being my love, my support, my friend and for having our Hope. Happy Birthday, my Dear!!💕 ", - Tatiana turned to her husband.

The celebrity friends of the couple, including Alika Smekhova, Svetlana Bondarchuk, Yana Rudkovskaya and Inna Malikova, immediately joined the congratulations.

Fans admired the amazing atmosphere between the lovers, which was visible even through the screen. "What a cool couple you are !!! 👍 ","Our delightful Tanyusha, you deserve such happiness, such love !!!❤️❤️❤️ ","How beautiful you are and so fit each other 🤗😍🌼 ","The main support for a man is a woman who loves him! ”,“ What are you alike! Happiness to you!❤️ ", wrote users in the comments.

Recall that Tatyana Navka first encountered Peskov at the birthday party of a mutual friend in 2010. She did not recognize the official from the TV, and Dmitry Sergeevich had no idea about the gold medal won in Turin, and about the "Ice Age": for him, Tatiana was a beautiful blonde from a hair dye advertisement.

The man kissed the skater's hand, dropped the phrase "nice to meet you" and disappeared.
Exactly a year has passed, and fate brought the couple together at the holiday of the same friend. As Navka noted, everything turned out in an amazing way precisely because it should not have happened.

"I resisted for a long time, realizing the complexity of the situation: there is a family, three children, and in general everything is terrible. To be honest, I didn't even like it at first. Well, we talked, went to a restaurant a couple of times, I thought: "No, just friends." But he's done well - he took it with elegance and perseverance. Somehow he did everything cunningly. It seems to be courting, but it seems not. He said that we would be together, and I called his year Dmitry Sergeevich on "You". I could not cross this line in any way", - the skater confessed.