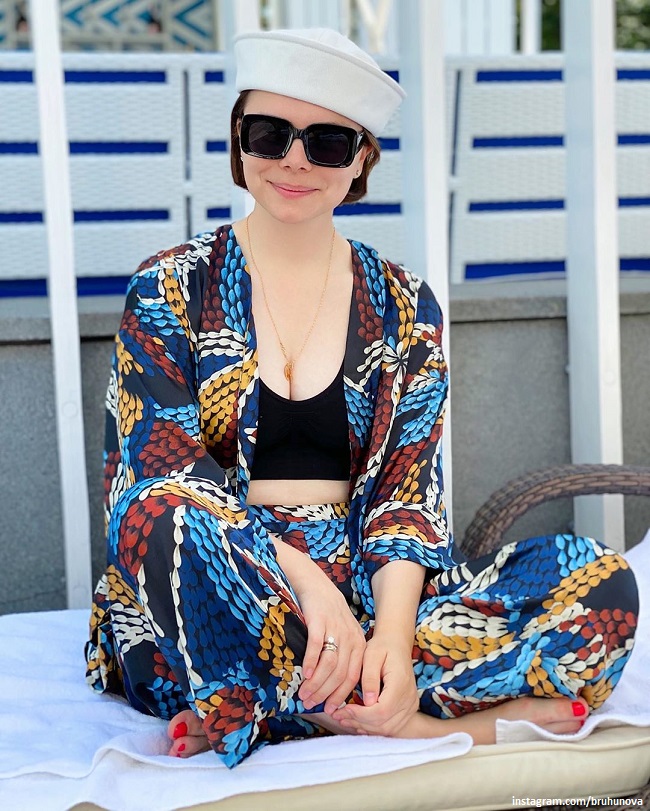 Petrosyan's 31-year-old wife and director of his miniature theater, Tatyana Brukhunova, shared a photo of her six-month-old baby and admitted that she refused maternity leave.

Tatyana Brukhunova promised not to post family pictures on the social network. And yet, after the announcement of the replenishment, the young mother began to share details about the child and even showed a frame with him.

The other day, on the 75th birthday of Yevgeny Petrosyan, the comedian and his young wife Tatyana Brukhunova revealed that they are raising a joint son - six-month-old Vagan. Tatiana immediately clarified: she does not intend to turn social networks into a "mother's" blog, show her pregnant photos and talk about raising her son. However, followers literally attack Brukhunova's account with questions about her baby son.

On September 18, Tatyana finally showed a new photo of a child playing at home on a special children's rug. The young mother did not comment on the frame in her Instagram stories, deciding to simply demonstrate that she spends time with him after she returned home.

Looking at the little Vagan's suit, one can safely assume that Brukhunova herself, a famous fashionista, selects his clothes. The humorist's wife has been interested in fashion for a long time and is undergoing training in specialized institutions, and also regularly arranges shopping both in expensive boutiques and in affordable stores.

By the way, it turned out that the young mother refused maternity leave. So, in the comments on her blog, Tatyana revealed that she decided not to leave her work at the Yevgeny Petrosyan Theater for the sake of maternity leave. While Tatiana goes on business trips and disappears at rehearsals, the mother of the woman, as well as a specially hired nanny, take care of little Vagash (as the boy in the family is called).

Apparently, the mother-in-law often visits Petrosyan. Moreover, she lives relatively close for regular trips - less than 200 kilometers from the capital, in Tula.

Brukhunova explained why she is not going to post “pregnant” photos: “This photo is for a family album! I'm not an artist! I do not want to be discussed about my personal life. Clothes, food and so on - please, but not family and even more physiology".

"It seems to me that the fashion to lay out a pregnant belly is vicious from all angles. There is something inadequate in this. I am convinced that the less people around you know about it, the calmer my mother is. What is all this foreign energy for ?! Pregnancy is akin to meditation, finding balance in your new state. And certainly not the broadcast of this creation. This is my positionI, ”concluded Petrosyan's wife.