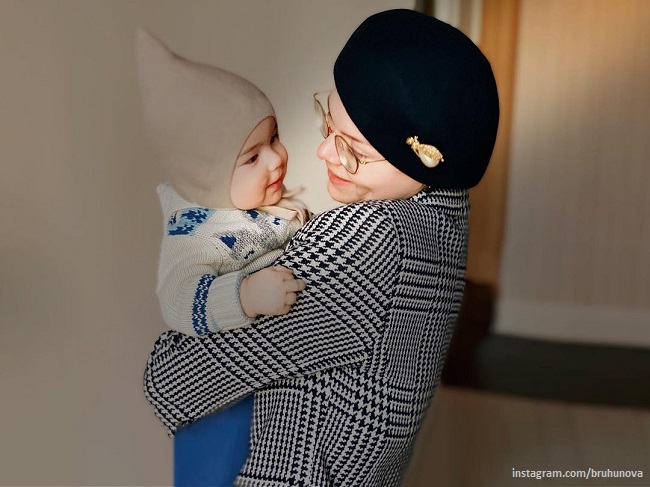 Petrosyan’s 31-year-old wife, Tatyana Brukhunova, starred in a romantic photo shoot, dramatically changing her image. The chosen one of the comedian also showed her 9-month-old son, who has already received a New Year’s gift.

Yevgeny Petrosyan’s wife prefers a strict style of dress. She did not wear a deep neckline and mini, she preferred to smooth her hair back, and did not allow herself to reveal her shoulders. But on the eve of the New Year, Tatyana made a gift to her subscribers – she published a video from the filming of Ksenia Knyazeva’s clothing collection.

In the frame, the wife of a 75-year-old comedian poses while sitting on the floor near the sofa. She is wearing a pink dress with a full skirt and a hat of the same color. Tatiana’s right shoulder is flirty open, and the side facing the viewer is covered with a jacket. Interestingly, for a photo shoot, Brukhunova poses without glasses and with nude makeup. It seems that she only has makeup on her eyelashes. The result is a very fresh and romantic look.

“How not to leave a pleasant comment under such beauty! Tatyana, you are beautiful! ”,“ Tatyana, how many times I look at you, in different images .. Everything suits you! Sweetheart, gentle, romantic, mysterious … So different “,” In this image you are irresistible, I would like to see you more often in this image“, – write enthusiastic fans.

Some of the subscribers noted the similarity between Brukhunova and Elizaveta Boyarskaya. And one reader received a tough answer from Tatyana when she asked why she does not constantly walk in this way. The humorist’s wife noted that she does not like familiarity and can be banned for such advice.

Tatyana Brukhunova also shared a fresh photo of her 9-month-old son Vagan. The humorist’s wife captured the child at home. The heir to the famous pop artist was dressed in a stylish dark gray suit and the same color cap with a print in the form of Mickey Mouse.

The picture shows a baby sitting on the floor next to a toy car. He looks with interest at the New Year’s surprise made by his parents.

“Grandfather Frost could not stand it and brought the gift early. 😂 “, – admitted Tatiana.

The snapshot moved subscribers. “Charming fashionista “,” Milasha Vagasha “,” Cheeks-peaches “,” So much like my mother, just a copy“, – admired the fans.

Brukhunova noted that the son, who is less than a year old, is already playing with the car with might and main. “Does he understand that this is a car?“- asked one of the subscribers. “Of course. He sits on it“, – Petrosyan’s wife boasted.

Tatiana also posted a photo that she wanted to put in the family album. But Vagan was not in the mood and did not want to be photographed.

“It was supposed to be a family photo for the album, but Vagan categorically did not want to be photographed.“Petrosyan’s wife commented on the picture.