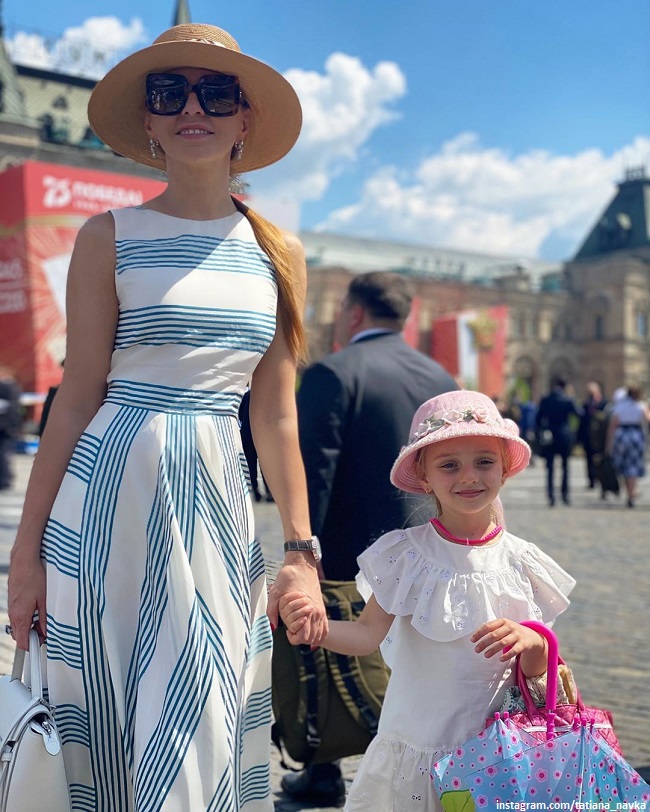 Olympic champion, figure skater Tatyana Navka shared a photo of her 6-year-old daughter Nadia from ballet classes and told what else her girl was doing.

The youngest daughter of Tatyana Navka, born in a marriage with the presidential press secretary Dmitry Peskov, followed in the footsteps of the star mother and is actively involved in sports. Nadia has been attending ballet and figure skating for several years. At the end of 2019, the girl made her debut in her mother's ice show. The famous figure skater showed a moment of one of the child's workouts. Nadia, with an erect posture, stood in one of the ballet positions with her arms raised. A teacher helped her from behind.

"My ballerina🥰😇 KEvery year in the fall, the opening of the theatrical season begins, and we have the opening of our own - comprehensively developing: foreign languages, training, ballet, music, classes, visiting museums and theaters 😉😁 Pleasure training (not always of course)😜, classes with a smile and dance with a soul, our ballet teacher adheres to this principle, which I personally am very impressed with, and Nadia likes the classes and dances themselves! 👼 ", - shared Tatiana Navka.

In the comments, fans admired the grown-up Nadia. "The ballerina is wonderful! Good ❤️ the beginning of the school year!🌷 ","The girl is a miracle, the future Star! A hard worker, like parents🌺 ","Another ode the star is growing😊so pretty!😊 ","Clever Nadia! Stretched out, grown up❤️❤️❤️May she grow up as a happy and joyful girl 🙏 ","Like a figurine 😍 ", - users wrote.

Tatiana is a mother of two daughters. The elder Alexandra was born in her first marriage with her coach, world ice dancing champion Alexander Zhulin. The couple announced their divorce in 2010. In the same year, the athlete met the president's press secretary. Later, the skater began an affair with Dmitry Peskov. On August 21, 2014, the couple had a daughter, Nadia, and a year later they got married in Sochi. Note that, in turn, Dmitry Peskov has three sons and a daughter from a past relationship.