Russia has every opportunity to take one of the leading places in the world wine market. However, so far we are losing the competition even at home.

We need a specific and clear state program that will help winemakers restore their former glory to Russian wines.

On the eve of Easter, which many of us will meet with the Crimean Cahors, it’s time to talk about winemaking – the basis of the economy and pride of the entire peninsula.

Let’s be honest: the industry is in a very difficult situation and needs government assistance. In fact, it is almost destroyed.

Gorbachev was the first to declare war on winemaking with his “anti-alcohol campaign.” Judge for yourself: according to some data, during perestroika, 30% of vineyards were destroyed in the USSR, and more than 20 in Crimea.

Then this “case” was continued by the Ukrainian authorities, for whom Crimea has always been an unloved stepson. The trouble is that all the years the wine industry continued to lose vineyards. The most beautiful, vivid plots were ruthlessly transferred for individual development or the construction of hotels. And those vineyards that have survived have long ago degenerated and need a complete renewal of the vines.

After reunification with Russia, the process of restoration of the Crimean economy, including the wine industry, began. How are things now?

We must say right away that with the introduction of excise stamps, shmurdyak, as the Crimeans call counterfeit wine made from low-quality wine material, has decreased by an order of magnitude. The excise stamp can be used to trace literally every bottle, where, by whom, when and from what raw materials the product was produced. In addition, in 2019, the Russian Ministry of Finance proposed introducing minimum retail prices for sparkling wine to combat counterfeiting. And he achieved his goal: from January 1, 2021, the minimum price for sparkling wine was approved at 164 rubles per bottle. Now producers of real champagne will not have to compete with counterfeit producers.

The wine market in Russia, including the Crimea, has been regulated by the Federal Law “On Viticulture and Winemaking in the Russian Federation” since June 26, 2020. We have already written about this law, and now it is important to remind readers that the “wine of Russia” must be 100% produced from grapes grown on the territory of the country. The law regulates two more important concepts – the protected geographical indication (PGI) and the protected name of the place of production (ZNMP). PGI wine is assumed to be a drink from the grapes of the region where the wine is produced. And ZNMP wine is made from grapes from a specific small area (terroir).

Today the Crimean wine industry is represented by several large producers and private wineries. Interestingly, over the past two years, three state-owned wine giants have been privatized, in fact, sold for a pittance to home-grown oligarchs.

“Massandra”, for example, cost the buyer 5.3 billion rubles. But he pledged to invest 54 billion in production. A year earlier, Novy Svet and Koktebel were sold for 1.5 billion and 1.2 billion rubles. New owners promise new investments. Well, wait and see.

Our experts believe that the reserve of import substitution in the wine industry is about 500 billion rubles a year. It is clear that we will never give up exporting, but, you see, a significant part of these funds could be “mastered” in Russia and used to subsidize the industry and promote our own wines. And for this you need to grow high-quality grapes and expand production. 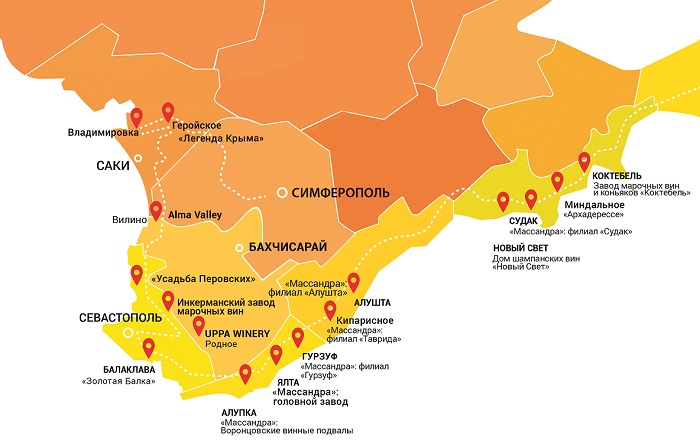 Winemaking and Crimea are historically inseparable from each other. It’s all about the so-called terroirs.

This professional term is a combination of natural, climatic, soil, historical and other factors that determine the ability of a particular territory to produce any grape varieties. Crimean terroirs are similar in quality to the famous European wine-making regions. Crimea, as you know, lies on the same 45th “wine” parallel crossing the south of France and the north of Italy.

Grapes on the peninsula began to be grown by the Greeks in Ancient Chersonesos, and continued in the Bosporan Kingdom, the Principality of Theodoro and the colonies of the Genoese Republic. During the period of the Ottoman possession of Crimea, winemaking, although it was banned because of Islam, did not finally die.

At the end of the 18th century, when Crimea became part of the Russian Empire, winemaking on the peninsula experienced a rebirth. A special contribution to the production of wine was made by Prince Grigory Potemkin, who planted almost the entire foothill area with vineyards.

The first large wine-making enterprise in Russia at the beginning of the 19th century was the legendary Massandra. Its base was laid by the then Governor-General of Novorossiya, Count Mikhail Vorontsov. He bought exquisite French and Spanish vines, planted them on the current territory of the Massandra vineyards, and by 1834 had about 16 thousand of his own grape bushes. In 1837, Nicholas I visited Crimea, who appreciated the quality of Vorontsov’s wines.

In the future, production only expanded, which was greatly facilitated by the famous Russian winemaker with great experience – Prince Lev Golitsyn. He laid the foundation for the famous wine collection, which at first absorbed about 32 thousand bottles and consisted of the best European samples.

By the end of the 19th century, Crimean champagne had become an elite drink. He was delivered to the imperial court. Champagne “New World” with a double-headed eagle on the label was drunk at the coronation of Nicholas II.

When choosing Crimean wine in a store, do not be too lazy to read the information on the label.

You should also pay attention to the specific place of production.

If you prefer dessert or fortified wines, then look for a producer from the South Coast of Crimea. “Massandra”, for example. The legendary Crimean muscats are grown on the southern coast. The same varieties grow in Italy, Portugal and Spain, but the Crimean Muscat, as winemakers say, has its own flavoring feature – the delicate aroma of a tea rose. Therefore, sherries, port wines and Madeira are produced here no worse than in the vicinity of Porto.

By the way, “Red Stone White Muscat” from “Massandra”, according to the agency “Kryminform”, is the favorite wine of Queen Elizabeth II of England. Every year a 200-liter barrel of this wine is sent to the UK through the port of St. Petersburg.

East of Crimea is dry and sparkling wines from Sudak, Koktebel, Solnechnaya Dolina. Wine is made there from the so-called autochthonous grape varieties, that is, those born in this area. These include “Kokur”, “Kefesia” and some others.

“Novy Svet” can formally be attributed to the east of Crimea, although it is too hot there for the main grape varieties from which champagne is made. Ever since the time of the founder of the “New World” Lev Golitsyn, grapes have been imported there – from more suitable “dry” places of the peninsula near Sevastopol.

The west of Crimea, especially Sevastopol, is famous for its sparkling wines. Some champagne producers use nutmeg, which makes the wine taste more peachy or even with notes of figs. An interesting wine-making place in the west of Crimea is the village of Rodnoe, Balaklava region. The climate there is suitable for dry wines, and it is no coincidence that these places are often called “Crimean Burgundy”.