Over the entire history of its development, mankind has created over 140 original writing systems. The most popular today are Latin, Cyrillic, Arabic, Chinese characters and Devanagari. Along with them, there are incredibly strange alphabets that have a limited scope, but that makes them no less interesting.

A new writing system, which is considered the most mysterious and unique on the territory of the African continent. Together with the language of the same name, it was created in 1930 by adherents of the Nigerian Christian Pentecostal sect “Oberi okayme” (Ob »ri ɔkaimɛ), therefore in the Western classification it bears this name.

Medefaidrin is used in Itu and Obio Ibiono districts in the southeastern state of Akwa Ibom. Consists of 32 letters, as well as diacritics and special characters. It is not known exactly on what principle it is built – here fragments of the Latin alphabet and the local Ibibio dialect are bizarrely combined. Western researchers suggest that the creators of the innovative writing system arbitrarily added some elements from other languages ​​that do not lend themselves to identification.

According to legend, the Holy Spirit transmitted Medefaydrin in a dream to the founder of the sect, Michael Ukpon, and another adept, Akpan Udofia, wrote down a divine message.

Linguists are inclined to consider “Oberi okayme” an artificial language, developed exclusively for the spiritual communication of members of the sect, and its symbolic display as a secret writing. There are no analogues of medefeidrin in the world. The number of members of the Obɛri ɔkaimɛ community today is 4000 people, exactly the same number of speakers of the “sent by God” language.

Another example of cryptography, but this time of a more ancient origin. Shrouded in mystery and ancient legends, theban is incredibly popular among modern fans of witchcraft. In particular, the followers of the Western neo-pagan religion Wicca use it in their rituals, applying symbols of an unusual alphabet on amulets and cult objects.

Theban, or as it is also called the Theban alphabet, was invented in the Middle Ages by an unknown occultist, presumably by Pope Honorius III (1150 – 1227) and received his name. This exotic writing system, outwardly similar to alchemical symbols, possessed exceptional versatility – with its help any European language was transformed into cryptography, understandable only to initiates. 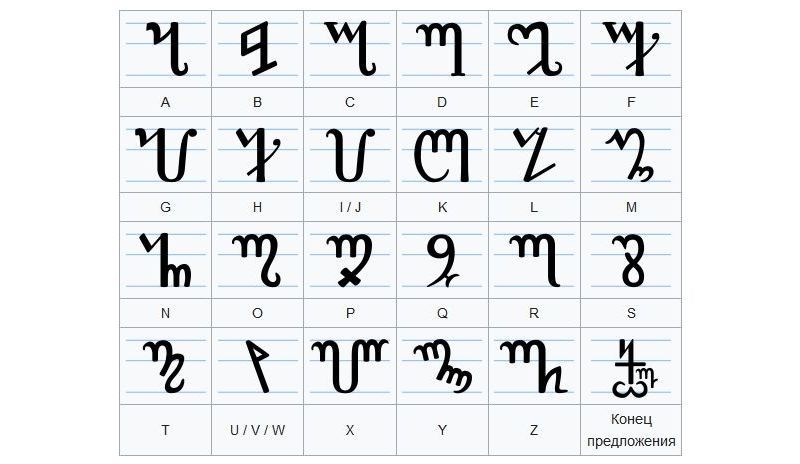 Honorius’s alphabet consists of 24 characters, which successfully replaced the Latin letters when encrypting texts. Writings on it were made without punctuation and without emphasizing the beginning of a sentence. Today theban is known as the “letter of witches (angels)”.

The Tuareg alphabet of Tifinagh is more reminiscent of alien messages than terrestrial writing. However, it has been used successfully by some Berber groups in North Africa for centuries. Tuaregs, as these tribes are called – a special people and their alphabet is exceptional in many ways: 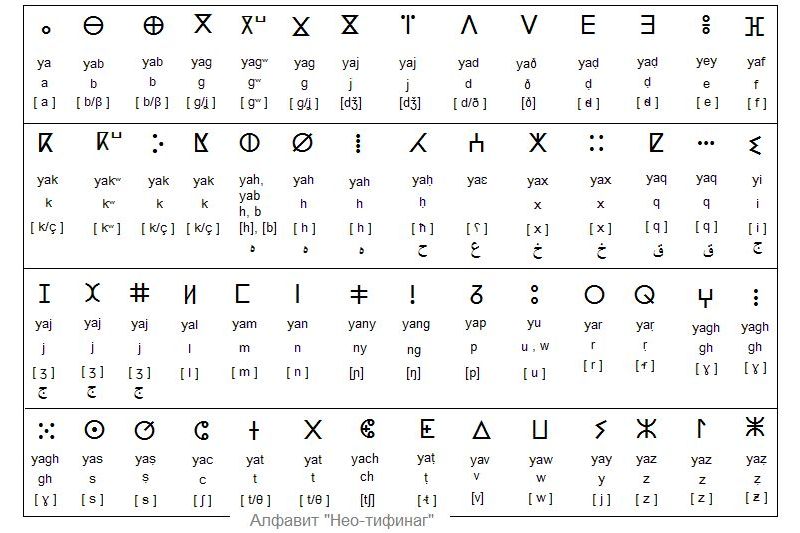 If Tifinagh looks unearthly, then what can be said about the ancient Celtic alphabet, which was a system of lines of different lengths and directions, strung on a common axis – vertical or horizontal. Despite the seeming primitiveness, ogam was very effective and was even used by druids to compose ciphered messages. 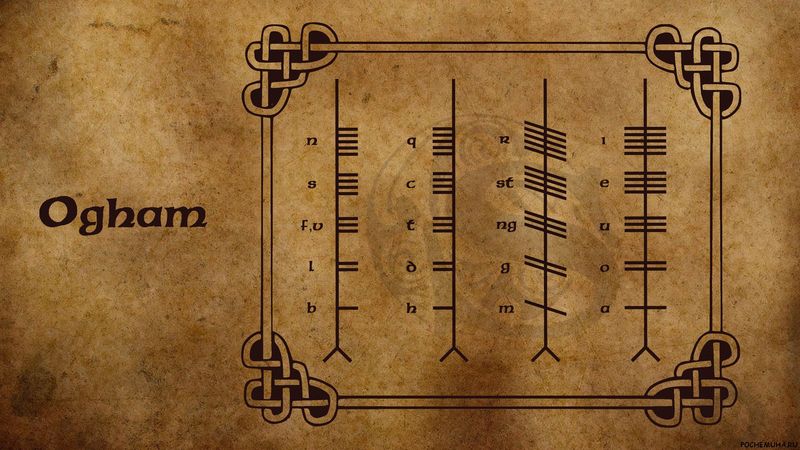 Celtic writing arose around the 1st century. and was used in the British Isles until the 13th century. Ogam is also called the “tree alphabet”, since each sign in it corresponds to a certain plant of the druidic horoscope. In total, there are 25 characters in the writing system, 13 of which are associated with calendar months (the Celtic chronology was somewhat different from the generally accepted one).

Like runes, ogam symbols were used in fortune telling, dividing into 4 groups – according to the number of the main natural elements. The peculiar style of the letters is explained by the fact that the Celts wrote their secret messages mainly on tree branches or stones. Straight lines are easiest to apply with an ax or weapon.

Inca nodal writing should occupy the top lines in the top of the most unusual alphabets. To transmit and save the necessary information, the most complex rope weaves and hanging threads were used, the number of which in a separate message could reach 2500.

After the discovery of the New World, Europeans for a long time considered the kippah to be an ordinary decoration or a primitive device for counting. Only in 1923 did the American historian Leland Locke question these assumptions, putting forward the theory of nodular writing.

The kippah was made of cotton or wool of alpacas and llamas, sometimes foreign objects were added to the main cord that determine the content of the letter. The threads were dyed in different colors with clearly defined symbols. For example, black meant time, green meant enemy hostilities, yellow shades were associated with gold, etc. There were mixtures of various colors, as well as interweaving of differently colored threads, and they all had a special meaning. The secret of the knotted alphabet has not yet been fully solved.

Recently, scientists agree that kipu refers to three-dimensional writing, similar to Braille, that is, the Indians partially “read” by touch. More than 1500 different signs are allocated in the system – twice as many hieroglyphs in the Mayan civilization. Another sensation belongs to mathematicians: they determined that the Incas built the kipa on the principles of binary encoding, similar to modern computer languages.

It is unlikely that the Inca rope records will ever be completely deciphered – there are too few of them left to compile a complete picture of the research. There are no more than 600 pieces in museums and private collections around the world. Many kipu were destroyed by the Spanish conquistadors, who believed that they were dealing with unkind magical amulets.

Not only women of the Tuareg tribe have their own written language, a similar privilege is available to residents of the Hunan province in southeastern China. Since the XII century. local aristocrats provided themselves with the opportunity for self-realization, thanks to the Nushu language they created. On it they wrote poems and songs, wrote letters to “sisters in spirit” and even autobiographical novels. 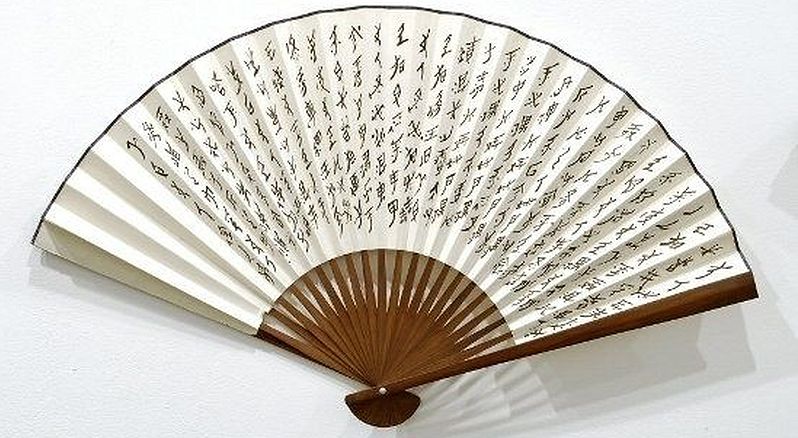 It is assumed that Nushu became a kind of response of Chinese women from high society to the inaccessibility of education. “Female writing” is distinguished by its elegance and much more convenient than the traditional Chinese hieroglyphs. The alphabet contains about 1000 characters, which indicates its relative compactness. Chinese aristocrats used syllabic writing, which allowed them to limit themselves to a small number of hieroglyphs with an extensive vocabulary.

Nushu symbols, nicknamed “mosquitoes” for the specificity of their style, were very decorative. They embroidered clothes or painted household items and amulets.

After the proclamation of the People’s Republic of China in 1949, education became compulsory for both sexes. The need for a special language for women disappeared and Nushu gradually began to be forgotten. National ethnographers are making efforts to preserve it, and now they offer to study the “ladies’ alphabet” both for the fair sex and for men.

The small Naxi people in southwestern China have preserved to this day the rarest writing system – dongba, consisting mainly of pictographic pictures. A similar alphabet is used by 30,000 people, including the indigenous inhabitants of Tibet.

Historians and ethnographers are sure that nasi dongba refers to a sacred writing that is intended exclusively for shamans or ministers of a religious cult. It was used in the compilation of ritual texts and records in sacred books. The creation of the alphabet is attributed to the Tibetan ruler Mubao Azong, who lived in the 13th century. However, not all scholars agree with this theory, referring to the mention of nasi dongba in Chinese annals dating back to the 7th century.

The pictographic alphabet from China is the only one in the world that is still actively used.

Dongba includes more than 1400 characters, 90% of which are pictograms that fold into words according to the rebus principle. This writing is very difficult to learn – it can take up to 15 years.

Not only the alphabet as a whole can be an amazing discovery, but also its individual components. Phonetics among peoples are different and, in order to convey it, sometimes the strangest letters are created. Of course, they seem as such only from the outside, to the uninitiated. Native speakers, on the other hand, do not experience any surprise when writing or pronouncing them.

A similar symbol once existed in the Cyrillic alphabet, but now it remains in only a few languages, in particular among the Belarusians, Romanians, Karakalpaks and Nivkhs. Pronounced as “U”, “B” or “L”, depending on the word in which it is located and placed at the end of a syllable after a vowel. 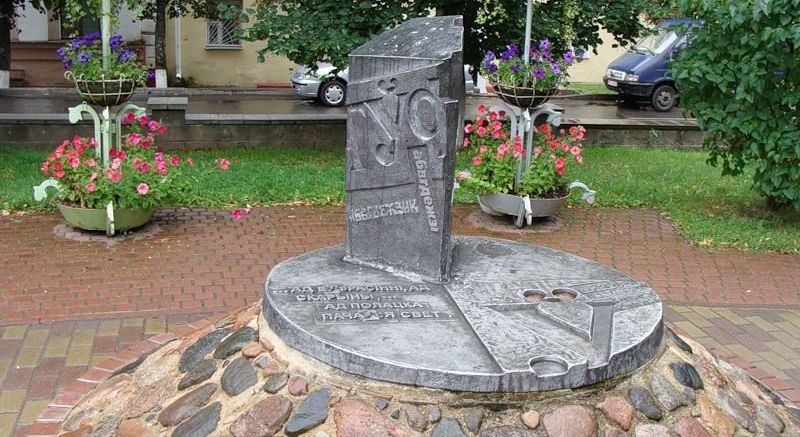 The traditional diacritic mark, the “tail” at the bottom of the written characters, indicates that they should be pronounced long and slightly “in the nose.” For example, in the Polish alphabet there are letters Ą and Ę with similar phonetics. “Ogoneki” were often found in the Old Church Slavonic, they are also found in Lithuanian, among the Navajo and Apache Indians.

In the languages ​​of the Baltic-Finnish branch and in Vietnamese, this grapheme is pronounced not at all like the usual “O”, but instead of “Y”, and with a nasal intonation. But the Portuguese use it to write the diphthong “oe”.

The tilde diacritic superscript originated in the Middle Ages and originally consisted of the two Latin letters NV, denoting softening of the sound. However, when writing quickly, both symbols merged until their conventional image in the form of a wave was finally fixed.

This letter of the extended Cyrillic alphabet represents the affricate “dzhe”, “dze”. It can be found in Serbian, Macedonian and Abkhazian. Active attempts were made to introduce Џ into the Ukrainian alphabet, but they ended in failure.

The letter appeared in the 1837 almanac “The Dniester Mermaid”, which was published in Buda. The creators of the collection were the first to introduce a phonetic spelling system for the Western Ukrainian language, using the techniques typical of folk speech. The almanac had a great influence on the development of national literature and writing, developing a new adapted alphabet. However, the letter Џ did not take root in it due to the difficulties with spelling.