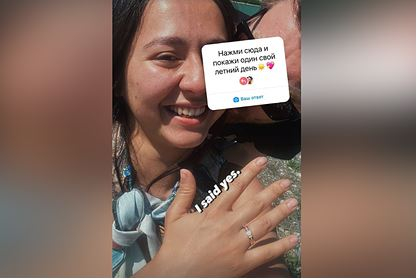 The singer who represented Russia at Eurovision 2021, the UN Refugee Agency Goodwill Ambassador Manizha (Manizha Sangin) announced her imminent marriage. She shared the news of the engagement on her Instagram story.

“I said yes,” the singer signed a joint photo with the groom, whose face she covered with a sticker. A wedding ring can be seen on the singer’s ring finger.

According to Life, the director Lado Kvatania became the chosen one of the 30-year-old celebrity, who came up with the concept of her number with the song “Russian Woman” (“Russian Woman”) at Eurovision.

Earlier, the Moscow office of the UN Refugee Agency (UNHCR) reported that Manizha became the first Russian artist invited to the Nansen Prize ceremony to perform a song and congratulate the laureate. “In the second verse there are very important words that this world will always be my home, no matter where I go, that no boundaries and difficulties will change it,” the singer said.