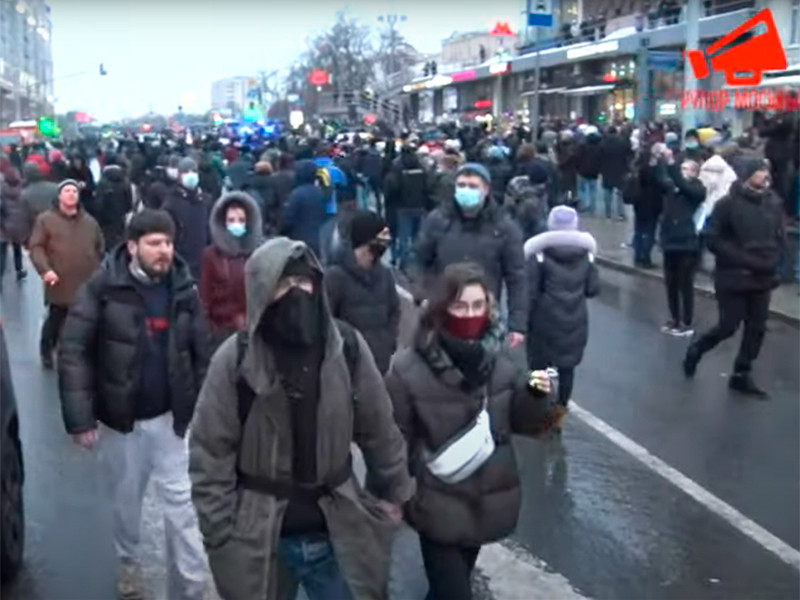 Interior Ministry investigators are actively working on the case of blocking roads at a protest action on 23 January. Dozens of interrogated are reported, some of whom were deceived: victims of police violence during the dispersal of the rally were formally summoned to discuss their complaints, but were interrogated as witnesses in the case of the overlap. There were no accused in this case for almost a month, but on February 22 in Moscow, immediately after his release from administrative arrest, the secretary of the Krasnoyarsk branch of the Libertarian Party of Russia, Gleb Maryasov, was detained, who became the first accused, Mediazona writes.

Maryasov is known for his vigorous activity: he was a volunteer at Navalny’s Krasnoyarsk headquarters, was injured during an attack by people wearing balaclavas on a libertarian camp on the banks of the Yenisei, held actions against amendments to the Constitution and demanded compensation from Norilsk Nickel to residents of the region for fuel spills. On January 23, Maryasov was in Moscow for a rally in support of Alexei Navalny and, according to him, acted peacefully, but the police punched him in the stomach and twisted him.

The court appointed the activist arrests under two articles of the Administrative Code and sent him to a temporary detention center for foreign citizens in the village of Sakharovo. After 30 days of arrest at the exit from the detention center, he was again detained in a criminal case of “deliberate blocking of transport communications and transport infrastructure in the central part of Moscow, including on the streets of Tverskaya, Bolshaya Dmitrovka, Strastnoy Boulevard, Tsvetnoy Boulevard and others.” It was initiated by the Main Investigation Department of the Ministry of Internal Affairs in Moscow immediately after the January 23 rally.

At the end of January, the “sanitary case” was transferred to the Investigative Committee, and the employees of the main investigation department of the Ministry of Internal Affairs in Moscow were left with two others – about blocking the transport infrastructure during the actions of 23 and 30 January. According to one of the Muscovites summoned for interrogations in the case of the January 23 rally, according to the investigation, some people wanted to disable the Moscow roads, for which they called on Navalny’s supporters to gather in the center of Moscow. People blocked traffic on the streets, thereby creating “a threat to the life, health and safety of citizens and the threat of destruction or damage to property.”

On February 6, police in St. Petersburg conducted searches at 30 addresses as part of an investigation into the case against unidentified persons on the blocking of roads at the January 23 rally. On the same day, mass searches were carried out in Vladivostok under the same article. Local activist Maksim Khozyajkin is suspected of the case, the deputy chairman of the regional branch of the Yabloko party Marina Zheleznyakova and several other people, including the author of the local YouTube channel NewsBox24 Gennady Shulga, whose video of the detention by the security forces was published by the deputy of the regional parliament Artyom Samsonov, are witnesses.

Security officials began questioning those detained at rallies in support of Navalny back in the police department. As activist Dmitry Zair-Bek said, he, along with five other people, was detained at the Matrosskaya Tishina pre-trial detention center on January 31 and brought to the police station in the Perovo district. There a certain person introduced himself as the head of the criminal investigation department of the Perovo district and asked if the detainees were going to give any evidence. “Moreover, under what article they are going to question us, he did not say. Some of the detainees tried to give testimony, but the lawyer told us that it was better not to do this. And, in principle, the interrogation itself ended there,” said Dmitry … For what article they were going to be questioned, the detainees were never told.

Zair-Bek refused to testify, referring to Article 51 of the Constitution, but among the other detainees there were those who managed to talk to the security officials – at first they were interrogated without a lawyer. District police officers came to those who had time to testify at the place of registration and orally invited for interrogation, but they demanded an official delivery of the summons.

A summons was not sent to Muscovite Anna Samsonova, whose 17-year-old son Valery was detained on January 31 at Lubyanka: the young man went to class with his stepfather and helped the girl who was running away from the riot police to get up, after which he was beaten with truncheons and dragged to the paddy wagon. At the OVD, the young man signed the administrative protocol, but did not ask for a copy of it, so he does not even know what article he is accused of. When Valery was released, it turned out that his spine was injured, but in the documents in the emergency room they wrote that the young man was allegedly discharged healthy.

The mother adds that after the arrest, employees of the department for juvenile affairs of the Lefortovo district called with threats for several days. “Once they called us at ten in the evening, they said:“ We will come to you with a check, ”she recalls.“ Next time they called: “Come to the Investigative Committee tomorrow.” We then temporarily left the city – my son still has so shock, he is on official sick leave, but they do not accept it. ” Even before leaving, the young man received a summons to the district prosecutor’s office: the summons itself contained a “warning conversation”, but in the end it turned into another interrogation.

49-year-old civil lawyer Viktor Lipatov was beaten by riot policemen on January 23 as he was about to leave Pushkin Square. Doctors of the Sklifosovsky Institute of Emergency Medicine that day diagnosed Lipatov with a bruised head wound and a fracture of his right arm. After the incident, Lipatov and his lawyer filed a complaint against the police with the Internal Security Department of the Ministry of Internal Affairs. This case was essentially not given a move, but soon an administrative case was brought against the lawyer under Part 5 of Article 20.2 (violation of the established procedure for holding a meeting, rally, demonstration, march or picket).

35-year-old Georgy Belov was also detained with the use of force on January 23: doctors at the trauma center recorded a hematoma of the right shoulder, a bruise of the right elbow joint and a bruise of the right hand. He filed with the UK an application to initiate a criminal case for abuse of power by police officers. Last week, the investigator called his lawyer and “evasively” invited him to the Main Investigation Department of the Ministry of Internal Affairs in Moscow. From this conversation, the defense attorney concluded that Belov was summoned for questioning in the case of beating, but after that the investigator, without any transition, began questioning the witness in the case of blocking the roads. Varvara Koifman, beaten up during the action on 23 January, was also summoned to an interrogation about road closures: the investigator, who was brought a thick folder with materials on her statement, began to ask how she was beaten, but then “switched” to questions about who blocked roads, showed aggression and interfered with the passage of citizens.

On the same day, the student Vasily Surov, who was beaten at the rally, went to the Main Investigation Department of the Ministry of Internal Affairs in Moscow with his lawyer. He was asked about eight questions: did he see anyone obstructing the movement of vehicles and pedestrians, and whether he could identify the “coordinators” of the action. According to Surov, there are no specific names or surnames in this case, and it is about a certain “unidentified circle of persons.” “It’s even a little scary that you can suddenly become one of this“ indefinite circle of people ”, even being a witness,” he said. Petr Khromov, a lawyer of the Committee against Torture, notes that the police are trying to build up an evidence base in the form of witnesses in these cases and re-qualify them as suspects, taking advantage of the fact that a lawyer is not necessary for a witness.