Save Stalin, or Tehran-43: New Details

Well-known American scholar of historical secrets, Howard Bloom, wrote a new book about what mortal danger awaited in 1943 in Tehran the leaders of the "Big Three" Stalin, Churchill and Roosevelt.

The book “Night of the Killers” describes a real terrorist war that the Nazis unleashed in order to destroy the top leadership of the USSR, Great Britain and the USA: they were going to decapitate the countries that fought with them in one fell swoop.

Western historians are still trying to play down the significance of Tehran events and even less notice the role that Soviet intelligence played in uncovering the Nazi conspiracy. A new book by an American historian sheds light on the dark side of distant events.

In September 1943, German intelligence learned of the intention of the Big Three leaders Churchill, Roosevelt and Stalin to hold a conference in Tehran soon, the main agenda of which was the question of opening a Second Front in Europe. The conference in Iran was keenly interested in Hitler's supporters. Having suffered a crushing defeat on the Kursk, the Nazis understood that for a new turning point in the war, something extraordinary had to be done. Thus, an operation plan was developed under the name Long Jump, which envisaged the simultaneous liquidation of the world leaders of the anti-Hitler coalition.

The head of the SS intelligence, General Walter Schellenberg, was responsible for the preparation of the operation, and Hitler's favorite Otto Skorzeny was appointed the main performer, having freed the Italian dictator Benito Mussolini from imprisonment in the mountains.

Skorzeny had the idea of ​​landing in the vicinity of Tehran about 50 Russian traitors who went over to Hitler, dressed in the form of Soviet troops. They had to mingle with the military, sent to guard the meeting. They were instructed to start a battle and restrain the pressure of the guards while the German special forces from the Brandenburg division had to deal with the enemies of the Fuhrer.

German agents found that underground tunnels were led into the British, American and Soviet embassies in Tehran, through which drinking water flowed from the nearby mountains, it was quite possible to move around them, their entrances were not guarded.

In general, despite the significant remoteness of Iran from Germany, this country was well known to the Germans. In Tehran, they had a large agent network, there were many sympathizers with the Nazis, there were radio transmitters and safe houses. Everything seemed to be in favor of the conspirators, world leaders were doomed, but ... Soviet intelligence intervened.

One of the German agents was turned over by our counterintelligence agents. His “heroic” escape was staged, he returned to Germany, where he was awarded the Iron Cross and was appointed head of the Iranian direction. It was he who supplied Moscow with the most important information about the organization of the murder. 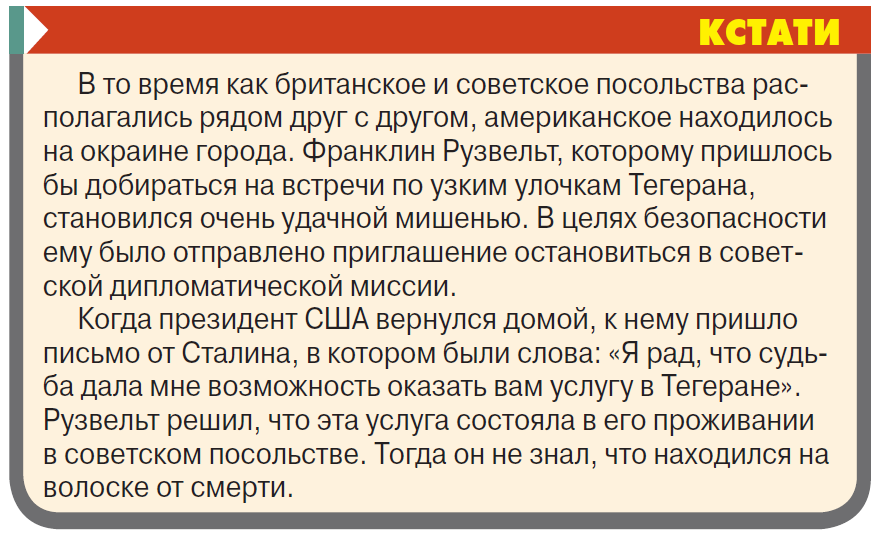 Bloom writes that the first group of German saboteurs of 18 people was met by Soviet soldiers who shot the enemy in the air. Several were brought for interrogation to the Tehran branch of the NKVD. However, the second group, led by SS executioner Hans von Ortel, who distinguished himself in Ukraine by the brutal extermination of Jews, managed to land successfully, they were already waiting for transport - trucks and camels. The SS men didn’t even think how strange the “Russian” camel soldiers traveling across Tehran would look.

Naturally, this unusual convoy immediately attracted the attention of 19-year-old Soviet agent Gevork Vartanyan, who was watching the night city, he sent his henchmen to track where the strange caravan was heading. Thus, safe houses were discovered that were immediately attacked by Soviet soldiers. Ortel only managed to transmit on the radio a code word about the failure of the operation.

Meanwhile, Stalin was informed that Soviet soldiers destroyed and captured 38 Nazi paratroopers, but six more saboteurs remained at large. Every house was searched in the city, snipers were placed on the roofs. Parts of the Red Army captured 15 thousand German citizens and supporters of the Nazis living in Tehran, all of them were sent to a specially created camp for this.

But a group of six surviving saboteurs still managed to gain a foothold in Tehran. Team Leader of the 5 commandos, Holten-Pflug, announced to subordinates that they would attack the British Embassy during Churchill's birthday party. They did not doubt the success of the operation, even intended to put on a German uniform so that the enemies knew who was killing them.

The Nazis hid in his house a police lieutenant, a supporter of the Nazis. Soviet intelligence managed to track down the place of their shelter. The house was surrounded by fighters of the Red Army. The Germans, who decided not to give up alive to the “Russian barbarians,” blew up their grenades. Tehran at night was awakened on December 1 by the roar of an explosion, the Nazis died under the ruins of a collapsed building.