Samara Governorate is located in the southeastern part of Russia, in the middle reaches of the Volga. The population of the region is more than 3 million people, Russians, Tatars, Ukrainians, Jews, Bashkirs, Kazakhs, Chuvashs, Armenians, Azerbaijanis, Germans live here. 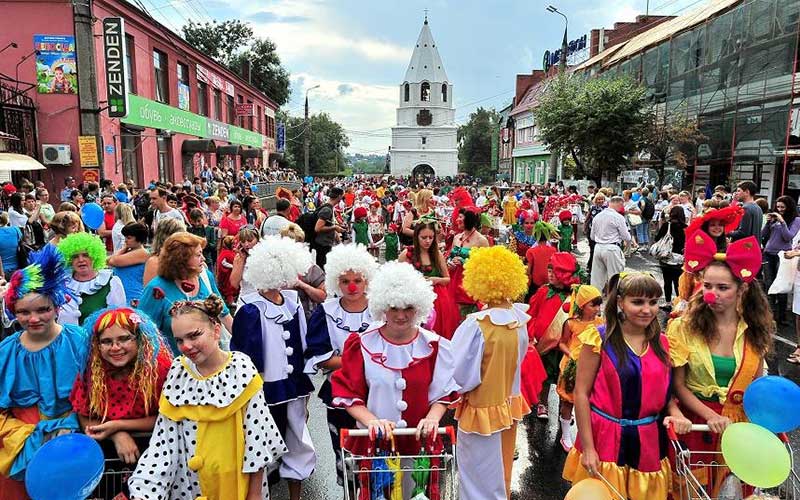 Despite the different national traditions of the peoples of the Samara region, history does not know cases of inter-religious or inter-ethnic conflicts. The inhabitants of this region are distinguished by friendliness, mutual trust, religious tolerance and solidarity.

National clothes of the peoples of the Samara region

Today, residents of Samara cities dress in European style, but many families have national costumes that are worn on special occasions.

Such clothes reflect the traditions of the nation, attitude to the world around and to oneself. The national costume of each nation has its own characteristics.

For Russians, the basis of men’s clothing was a belted shirt for release and narrow trousers tucked into boots – trousers. In the cold season, a zipun was worn – a caftan made of thick cloth.

The basis of women’s clothing was an embroidered shirt with long sleeves, over which a long, free-cut sundress was worn. In winter, women wore short cloth or velvet jackets – soul warmers.

Among the Tatars, traditional men’s and women’s clothing consisted of a shirt, wide trousers and a fitted velvet camisole or caftan with a standing collar – beshmet. The women’s shirt was decorated with flounces or appliqué. 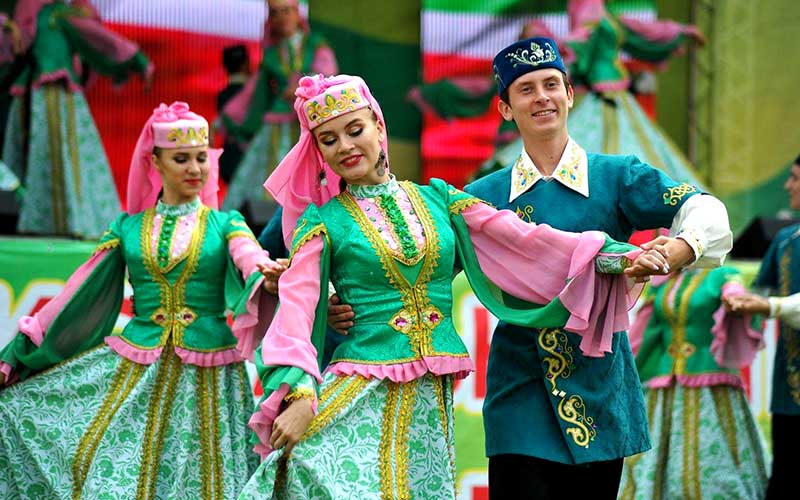 The upper part of the Ukrainian national dress consisted of a shirt sewn from hemp or linen and hand-embroidered with colored stylized images of flowers and berries.

The men’s suit also included trousers-harem pants, the women’s – a long skirt of variegated colors and an apron embroidered with patterns. The main winter clothing was a cloth jacket (scroll) or a casing (a sheepskin coat with fur inside).

Chuvash traditional clothing: a white shirt extended downwards, with a belt and an ornament embroidered on the chest, and ankle-length wide trousers. Noble Chuvash wore an apron decorated with fringes – sappun. 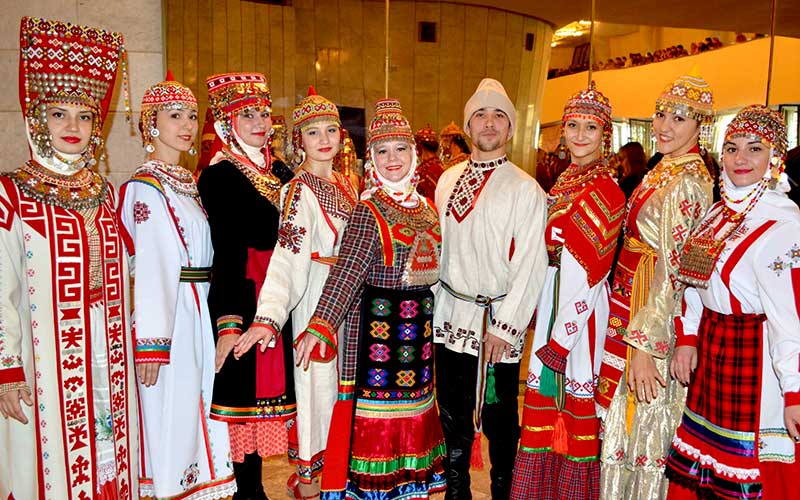 The traditional German attire for women included an embroidered or knitted jacket, a wide pleated skirt and a long apron. The male one consisted of a shirt, trousers and a short, tight-fitting torso vest.

The set of Mordovian national clothes included a tunic-shaped shirt made of homespun canvas – panar, pants with a wide step and dressing gowns: summer made of canvas, winter made of cloth. 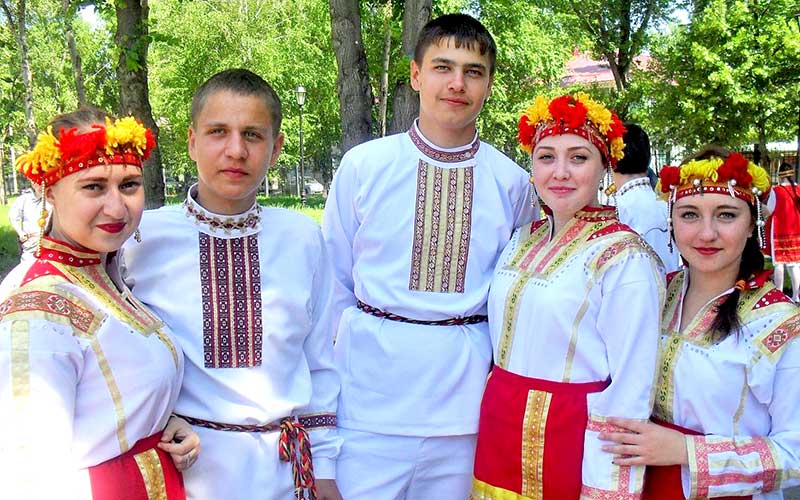 Among the Bashkirs, women wore long dresses with an apron decorated with ribbons and braid, men wore a shirt, trousers with a wide step and a camisole. A naked (not covered) sheepskin sheepskin coat served as winter clothing for the Bashkirs. 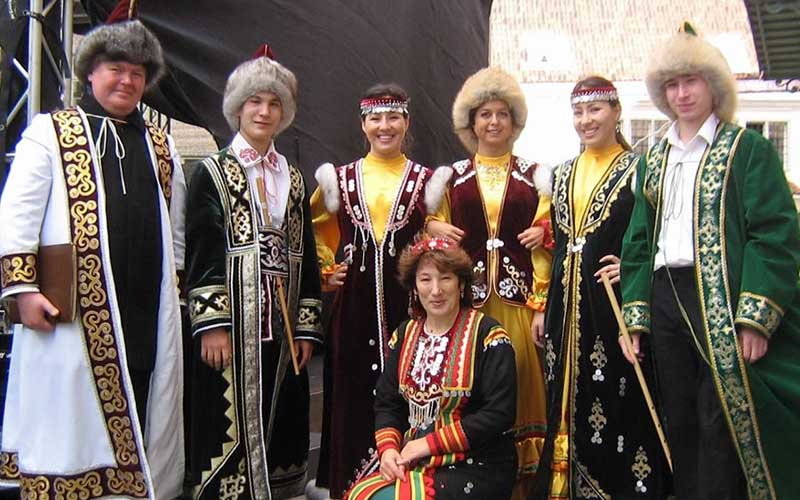 Holidays reflect the worldview of the people and are an important component of culture. In Russia, many church holidays are intertwined with ancient rituals dedicated to the seasons and stages of agricultural work.

Folk traditions in the Samara region include Christian holidays, which are celebrated by followers of other religions, and holidays of Turkic-speaking peoples, Christians often take part in them.

Of the winter holidays, Christmas time is considered one of the most important. They last for two weeks and include caroling at Christmas, when children and youth go around all the yards with songs glorifying Christ. They wish the owners well-being, for which they receive a reward in the form of treats and money.

Completes Christmas time Baptism. People go to church to draw water blessed by the priest, and brave souls plunge into the hole made in the form of a cross three times. 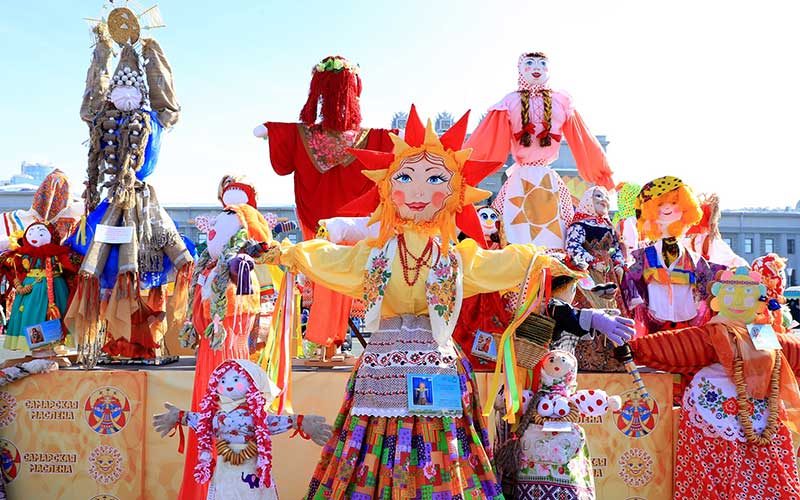 The holiday of the spring equinox is Maslenitsa, it is celebrated on the last week before Lent. Pancakes are baked on Maslenitsa, carnivals and folk festivals are held. Maslenitsa ends with Forgiveness Sunday.

One of the brightest holidays in the Samara region are Navruz (Nauryz) and Kargatuy, which are held during the spring equinox. Among the Turkic peoples, they symbolize the arrival of spring and the appeal to the forces of nature with a request to make the year prosperous and fertile. These days people visit relatives, exchange gifts, hold street concerts and performances.

After Lent, the main Orthodox holiday, Easter, is celebrated. The main attributes of the festive table are colored eggs and rich cakes. On Easter week, young people arrange games with rolling eggs.

The spring cycle of holidays ends with Trinity, which is celebrated on the 50th day after Easter. On Trinity, it is customary to hold mass festivities, the meaning of which is seeing off spring.

Among the summer holidays, the solstice day is celebrated – Ivan Kupala. The ancient ritual associated with lighting fires is not found in the Samara province today. Instead, “to cleanse from evil spirits,” passers-by are poured with water.

The national traditions of the peoples of the Samara region have preserved up to forty types of arts and crafts. Each nation has contributed to the development of unique folk crafts. 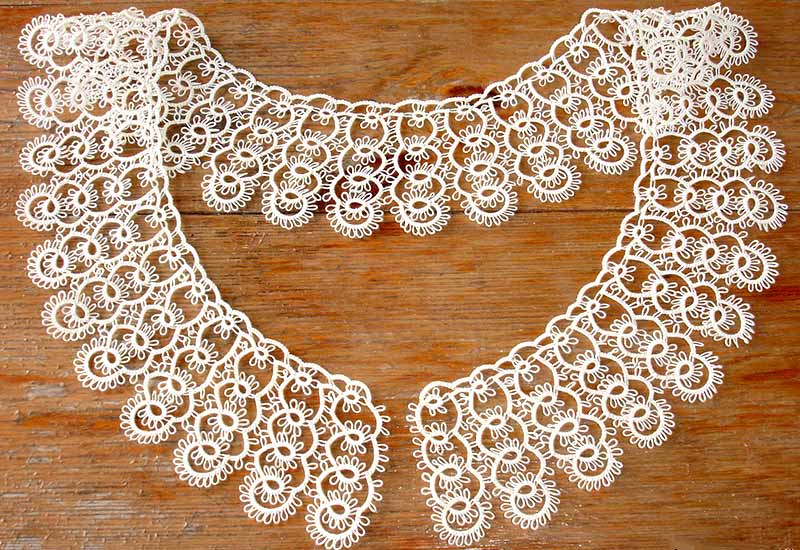 Among the Kazakhs and Bashkirs, felt occupied the main place in folk art. Clothes, hats, covers, bags, toys, jewelry were made from it. 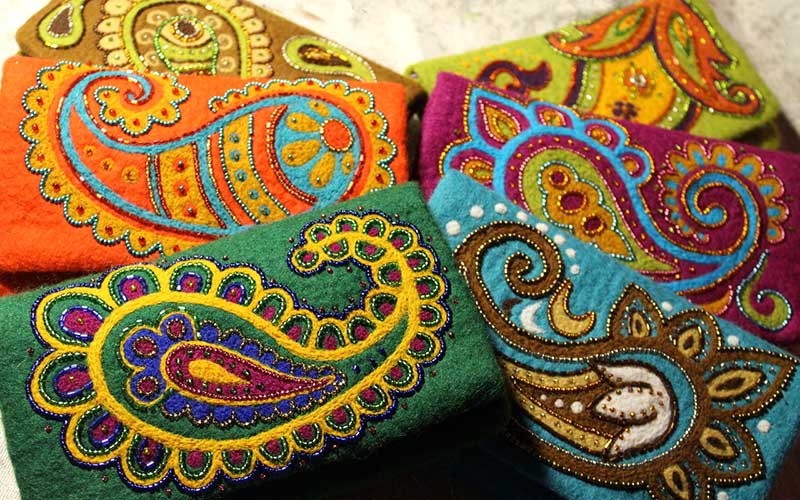 Such crafts were preserved among the Tatars: 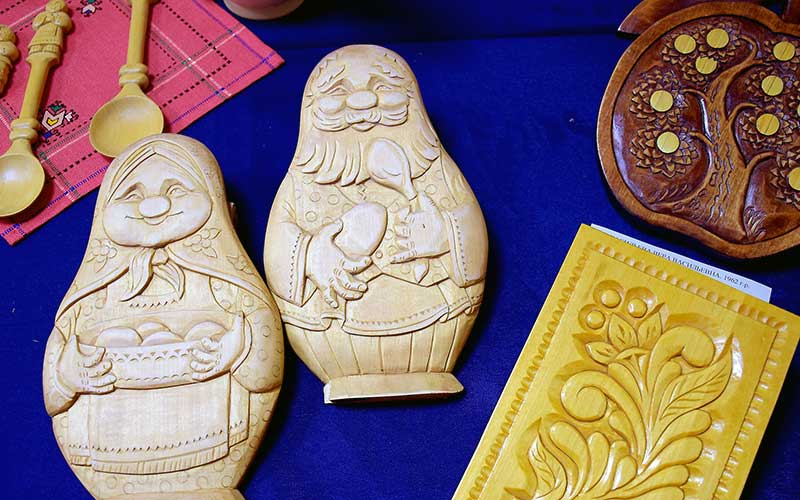 Today, in the Samara province, in the village of Sarbai, a unique Center for Folk Crafts operates. Those who wish can learn how to embroider and knit lace, make baskets from vines, sew patchwork rugs, weave bast shoes, work with wood and clay.

The cultural calendar of the Samara region includes regional, all-Union and international festivals.

Due to the multinational composition of the population, the traditions of the Samara region combine elements of the culture of different peoples. So, since 2012, the International Navruz has been held in Samara – a holiday where creative teams of Uzbeks, Tajiks, Turkmens, Kyrgyz, Kazakhs, Tatars, Azerbaijanis perform. 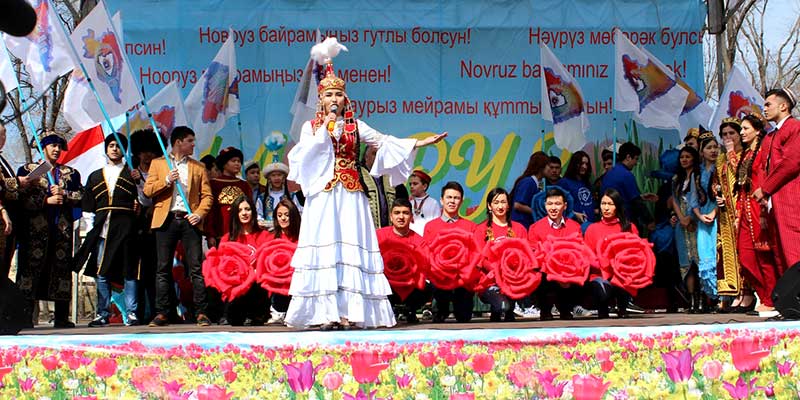 The month of August is especially rich in cultural events in the Samara Territory.

Since 2001, in August, a carnival dedicated to the Volga has been held along Samara Avenue, which stretches along the river bank. During the festive procession, a huge number of attractions operate on the embankment, and there are summer cafes.

In the first half of the month, the ethnic open-air festival “Protoka” takes place near the Mastryukovskie lakes, located on the road from Samara to Tolyatti.

At the end of August, the Plasticine Rain festival is held in the Strukovsky Garden, the oldest park in Samara. The holiday includes theatrical performances and musical concerts, in which artists from Italy, France, and the USA take part.

Silver pipes of the Volga region

The annual international festival of brass bands “Silver Trumpets of the Volga Region” takes place in the middle of the month in Syzran. It is attended by creative teams of various genres.

Day of the Tomato

Among the interesting traditions of the peoples of the Samara region is the Syzran Tomato gastronomic festival, popular in many countries. For the Samara Territory, this is a special holiday: tomato varieties are grown here, which are recognized as “champions” in taste and size. 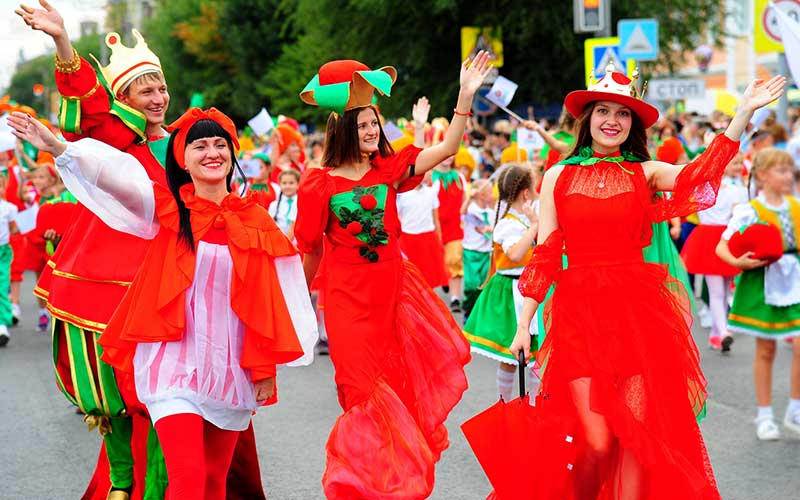 On the penultimate Saturday of August, Syzran, the third largest city in the Samara region, turns into a tomato kingdom. People in tomato costumes walk the streets, and numerous cafes and kiosks offer dishes and drinks based on tomatoes.