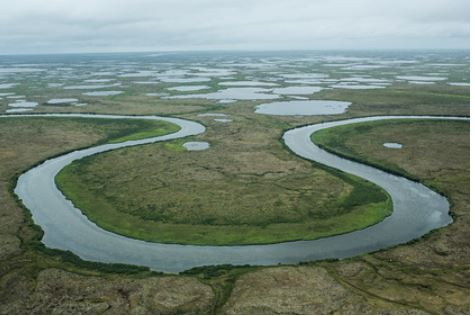 Due to global warming, permafrost, also called permafrost, is melting all over Russia. This process has already damaged dozens of buildings and installations for oil and gas production, threatening the country’s economic infrastructure, writes The Wall Street Journal. Scientists have predicted the collapse of the Russian oil industry if the authorities and business do not take decisive action.

Permafrost is soil and rocks that are constantly frozen, sometimes at a depth of several hundred meters. According to scientists, this land makes up two-thirds of the territory of Russia. Most of the country’s oil and gas infrastructure is located on it. Since 1976, the average temperature in Russia has risen 2.5 times faster than the rest of the world, according to the Russian government. Due to climate change and thawing of the soil in mines and factories, there is more and more corrosion damage, leaks and cracks. In gas and oil pipelines, staples and other parts of the support system previously anchored in permafrost often corrode, twist and bend due to changes in the structure of the earth, environmentalists say.

“In the recent past, everyone believed that by the end of the century, permafrost would affect the infrastructure. Now we see that we have little time. Oil, gas, villages – everything is at stake, ”said Vladimir Romanovsky, professor of geophysics at the University of Alaska. According to Russian officials and scientists, the melting of the permafrost could damage a fifth of the country’s oil and gas infrastructure. By 2050, the Russian economy will lose more than $ 68 billion.

Russian companies are investing millions of dollars in strengthening buildings, monitoring soil temperatures and installing high-tech cooling systems. However, enterprises do not always manage to avoid industrial disasters. Melting permafrost has caused the largest ever oil spill in the Arctic in spring 2020, threatening the ecosystem of the Arctic Ocean. Damage to a storage tank for diesel fuel in Siberia led to the leakage of 20 thousand tons of fuel. Representatives of the Norilsk Nickel mining company, which operates the installation, said thawing of the soil had damaged the pillars supporting the basement where the storage tank was located.

The government says 40 percent of buildings and infrastructure in permafrost areas have already been damaged. In September, Russian President Vladimir Putin ordered to accelerate work on the creation of a national permafrost monitoring system, which will include 140 stations with 30-meter wells and sensors to predict the consequences of climate change.

Soil thawing has a negative impact on residential areas. In Yakutsk, one of the coldest cities in the world, water pipes regularly burst, creating cracks and holes in buildings, and trains, according to local engineers, run at a slower speed due to deformation of the railroad tracks.